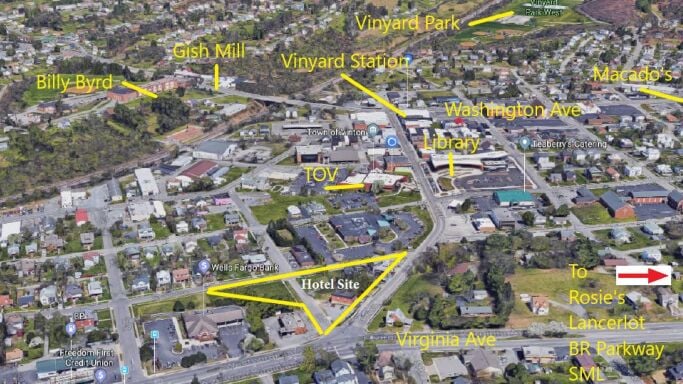 An isometric map of Vinton shows where in the town a proposed hotel will be, along with other local landmarks. Officials expect a 90- to 120-room hotel will soon be under construction. 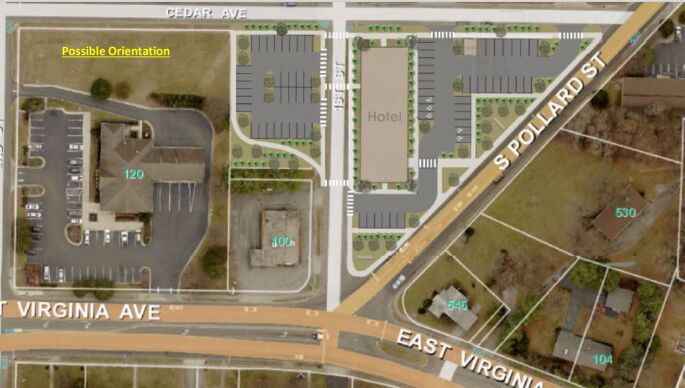 An overhead map suggests one layout for a hotel in downtown Vinton.

Vinton is making way for a hotel downtown, giving up about two acres and leaving available some of First Street for development.

The McDevitt Company, based in New England, is entering a sales agreement to receive six downtown Vinton parcels on Cedar Avenue and South Pollard Street for $10. The company plans to invest $12 million for the construction of a 90- to 120-room hotel, said Town Manager Pete Peters during a town council meeting Tuesday night.

The council voted unanimously to enter into that sales and performance agreement, effectively agreeing to convey the land, under the restriction that a hotel will go up.

“A number of things determined there was a market here in the community for a hotel,” Peters said, referencing a 2016 study. Compared to surrounding areas, “we had a very favorable leisure and recreation environment.”

First Street could become a block shorter at the Wells Fargo downtown, as Vinton abandons a stretch of the road and enters into a performance agreement with McDevitt Co. to ensure the hotel’s development. The town acquired those six parcels throughout 2019, razing four old and overgrown buildings on the premises, according to town documents.

“It took us a couple years to acquire those parcels,” Peters said, adding it was a 6-year effort. “Wells Fargo actually donated their parcel.”

In total, Vinton invested less than $500,000 on land acquisition and demolition, Peters said in an email. A limited-service hotel — like a Hilton, Marriott or Wyndham — of that size could generate almost $500,000 annually in new tax revenue, town documents said.

“The direct revenue is great,” Peters said. “But it will capture a lot of visitor spending that typically leaks out of the community.”

The hotel will bookend Vinton’s efforts to revitalize and reshape the southern entrance to its downtown business district, Peters said. It will be the first multi-story hotel in Vinton, and plans should soon solidify.

Christiansburg made food truck regulations more flexible in the downtown area and supporters of the change tout it as another step in ongoing efforts to improve that part of town.

The National Rifle Association on Thursday declined to endorse Republican Glenn Youngkin in the Virginia governor’s race, even as it endorsed the two other candidates on the party’s statewide ticket.

'What is democracy? Well, that's all of us': Roanokers mark anniversary of John Lewis' death

At a vigil called to mark the first anniversary of John Lewis' death, Roanoke activists called for Congress to protect voting access.

Lorraine Spaulding has been formally appointed as clerk of the town of Blacksburg, a position that opened up after the job’s long-time holder Donna Boone-Caldwell announced that she will be retiring next month.

It involved a claim from Johana Hicks that the town had not provided the councilwoman the necessary evidence to use in her defense against a measure to reprimand her last month.

Mohsen Manteghi is set to challenge current Blacksburg Mayor Leslie Hager-Smith for the seat that she initially won following a three-way race in 2017.

Opposing Salem Sheriff April Staton in her bid for reelection this November are Chris Shelor and Richard Goodman, who announced their campaigns last week.

It is unclear if the Democratic party will try to enter another candidate.

The recent moves from Johana Hicks come after the council reprimanded the outspoken councilwoman last month over a number of activities that several members deemed inappropriate and said undermined the public’s trust in town government.

An isometric map of Vinton shows where in the town a proposed hotel will be, along with other local landmarks. Officials expect a 90- to 120-room hotel will soon be under construction.

An overhead map suggests one layout for a hotel in downtown Vinton.