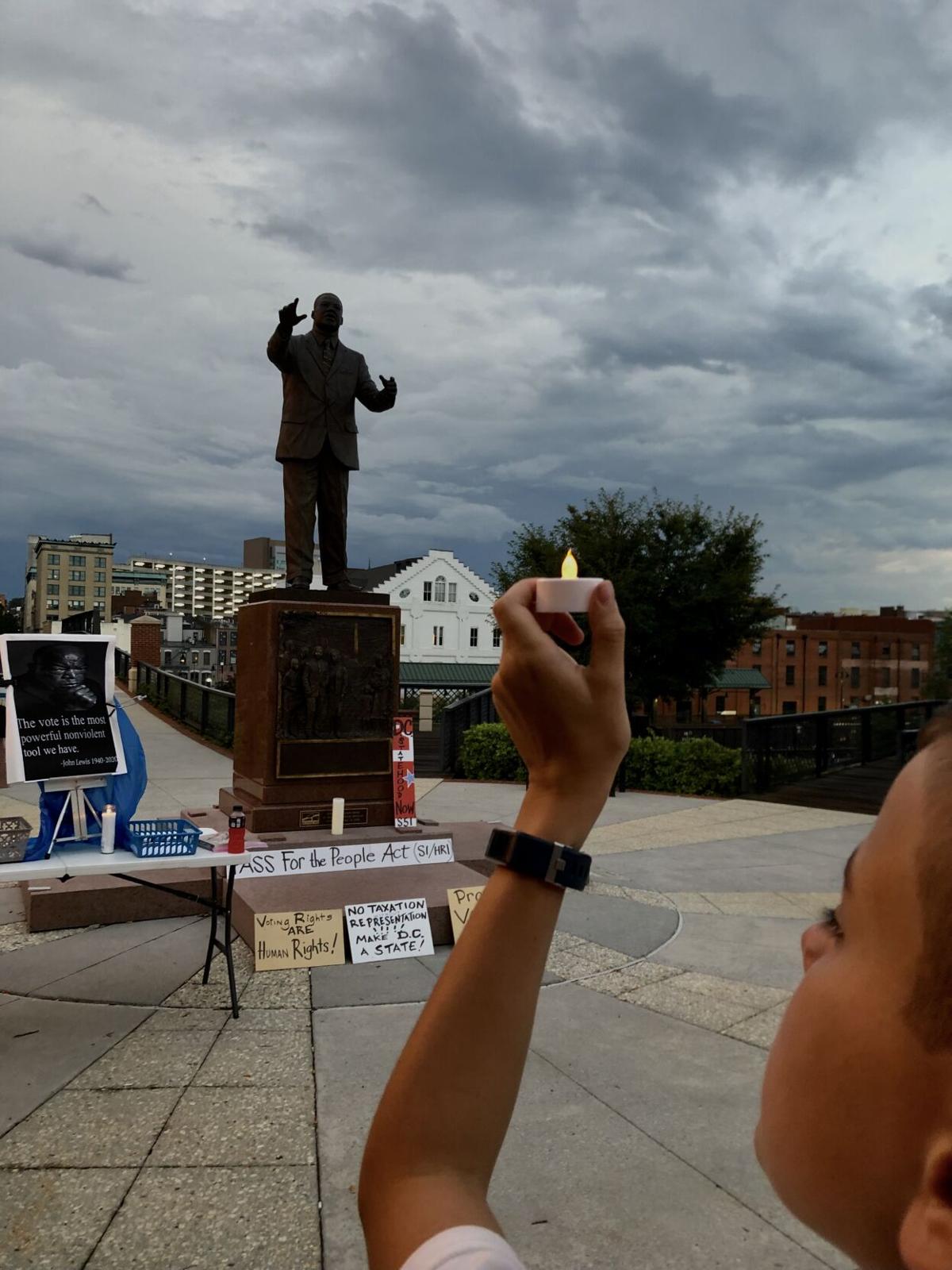 Carter Dralle, 12, of Roanoke holds up a light during Saturday’s vigil on the anniversary of John Lewis’ death. 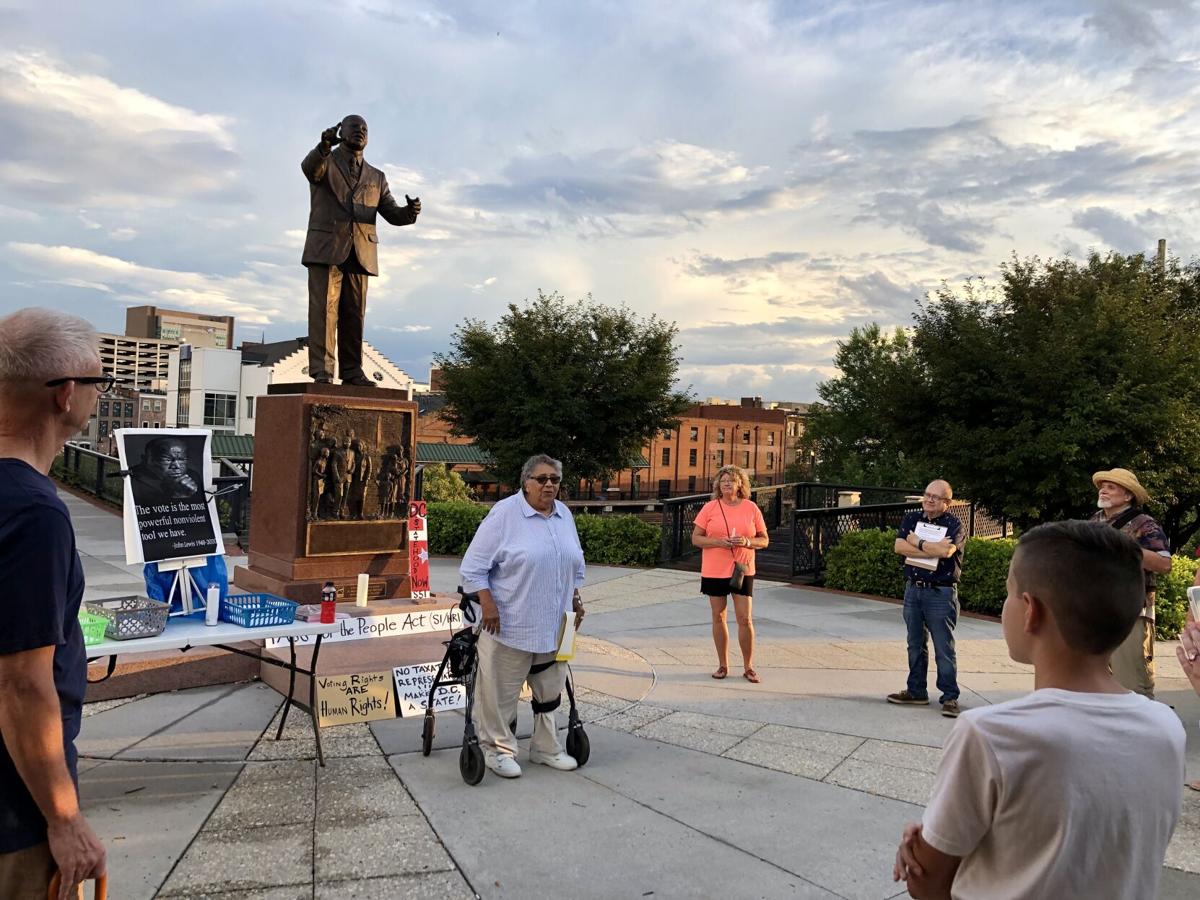 Roanoke activists invoked the spirit of John Lewis on Saturday at a “Good Trouble Vigil,” calling on Congress to pass voting protection laws — and on each other to continue working for positive change.

“This is the trouble vision,” said Bernadette Lark, one of the event’s organizers.

“Good trouble” was a Lewis catchphrase, used by the Georgia Democratic congressman and civil rights icon to urge listeners to stand up to racism and injustice, to bring change by getting in “good trouble, necessary trouble.” On the first anniversary of Lewis’ death, candlelight vigils around the country used the phrase as a tribute and inspiration.

The Roanoke event drew two dozen people to the Rev. Martin Luther King Jr. Memorial in downtown Roanoke. With the rain pausing and a series of rainbows bracketing downtown, speakers remembered Lewis’ example and pledged to work to protect and expand access to the ballot in a time when Republican-led legislatures are tightening voting requirements and practices.

Brenda Hale, president of the Roanoke branch of the NAACP, recalled Lewis in the 1960s, when he was a leader of the Student Nonviolent Coordinating Committee, became the youngest speaker at the 1963 March on Washington, D.C., and, in 1965, was hospitalized after Bloody Sunday, when Alabama state troopers attacked marchers trying to cross the Edmund Pettus Bridge in Selma. Above all, Lewis was persistent, Hale said.

“He was beaten down. … But John did not stay down. John got up” and went on to many years in Congress, among other roles, Hale said.

“He was on the battlefield unto his death,” Hale said.

The Rev. David Denham of the Tree of Life Church in Roanoke stood in front of a poster with a Lewis quote about voting being “the most nonviolent tool we have” and said that the Democracy Center that was launched earlier this year in Gainsboro will be registering people to vote year-round. The center also aims to talk to people about what is happening in their lives and find ways to support them, Denham said.

Eddie Seay, a longtime political organizer, said that he recently worked on a voting access campaign in Georgia and that it reminded him of Virginia 15 years ago. In terms of progressive politics, Virginia still has a long way to go — but the commonwealth has become an example to other states, Seay said. His voice shaking, Seay asked those at the vigil not to let up on their efforts.

Vigil organizers asked Congress to pass the John Lewis Voting Rights Advancement Act, which would update the 1965 Voting Rights Act, including restricting how states can make changes to their voting procedures, and the For the People Act, which would set minimum voting rules in every state including 15 days of early voting, online voter registration, independent commissions to oversee redistricting and more. Organizers also said they supported statehood for Washington, D.C.

Polly Branch, a Roanoke artist, said in spreading democracy, the most important task for those at the vigil might be to just engage with those they disagree with politically.

“What is a democracy? Well, that’s all of us. That’s not easy,” Branch said. “Raise your courage. Talk to somebody you haven’t talked to before. This is peace-making at its core.”

The vigil wrapped up with participants lifting LED tea lights, then placing them in a circle around the King memorial as Lark sang Stevie Wonder’s “Love’s in Need of Love Today.”

Carter Dralle, 12, of Roanoke holds up a light during Saturday’s vigil on the anniversary of John Lewis’ death.