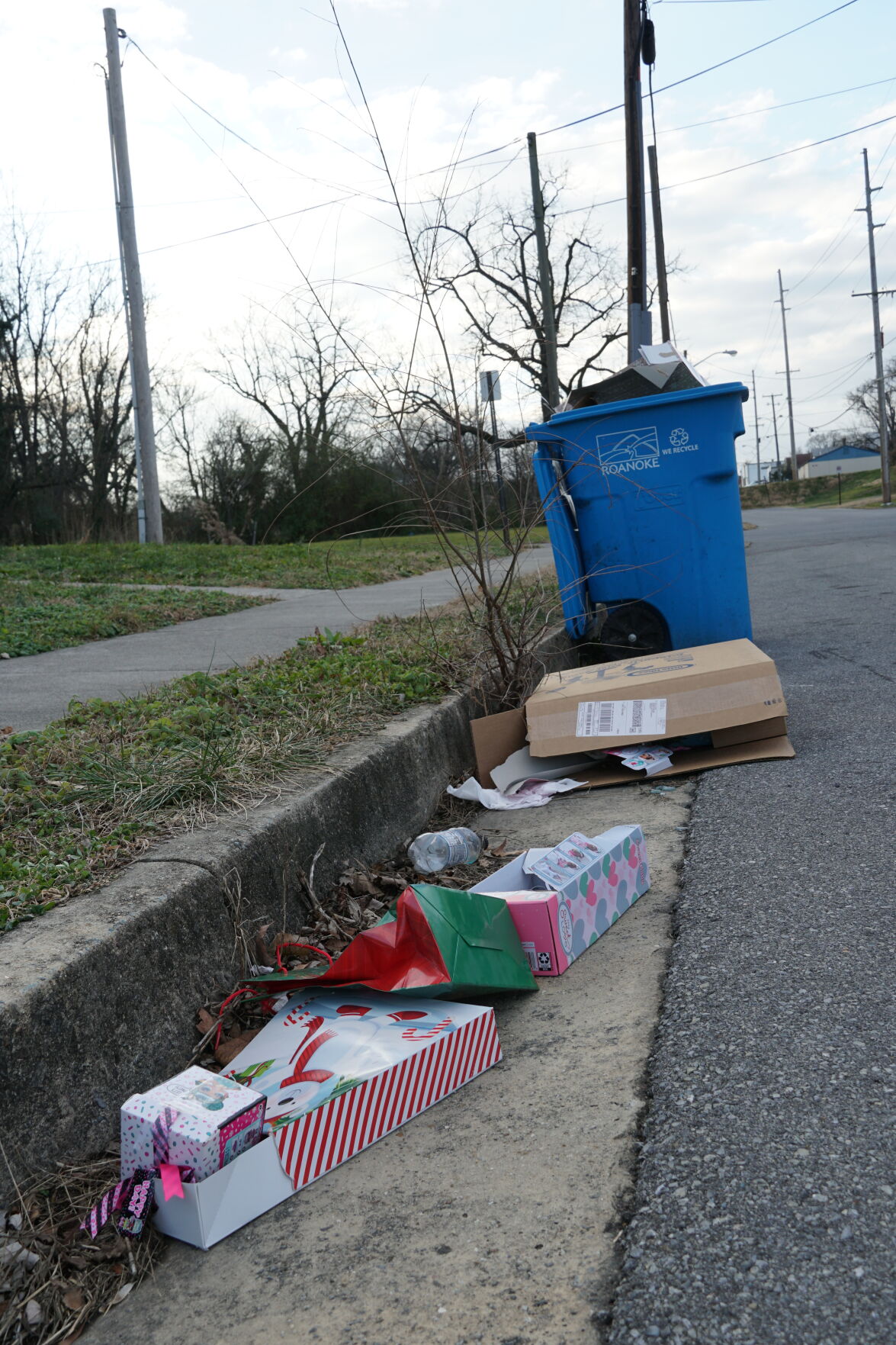 A proliferation of punctured packages and discarded cardboard overflow from a recycling container in Roanoke. Residential trash collections increase by 20% to 25% the first pickup day after Christmas, authorities said. 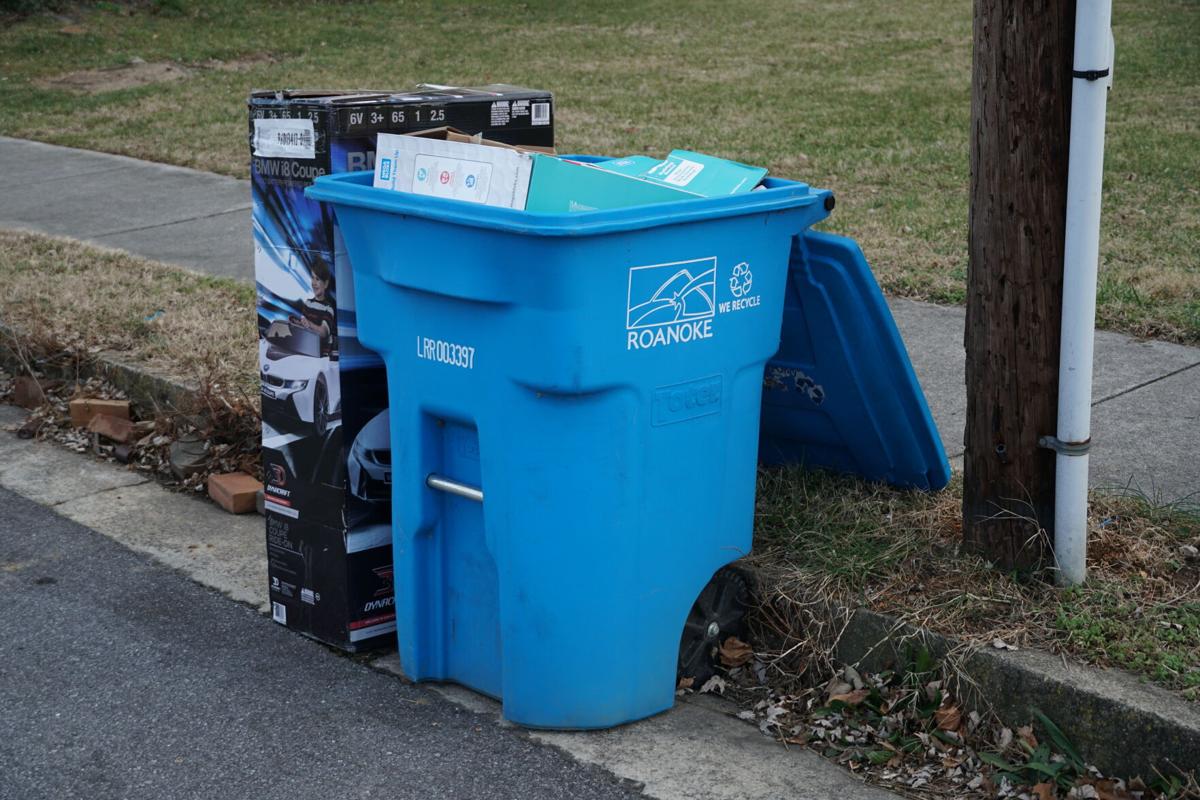 The proliferation of punctured packages, discarded cardboard and other refuse in curbside bins this week are remnants of a Christmas past.

“Christmas is definitely the time of giving,” said Dan Miles, CEO of Roanoke Valley Resource Authority. “We’re given more and more trash every year at this time.”

Garbage and recycling bins are overflowing with torn-open, gift-wrapped packages, and trash collectors in the Roanoke Valley expect to amass more household refuse this time of the season than other days of the year.

Trash collections from Roanoke County, Roanoke, Salem and Vinton go to RVRA, which transports the waste to Smith Gap Landfill in Roanoke County.

The authority receives 20% to 25% more waste by weight on the first collection day after Christmas, which this year fell on Monday, Miles said.

“Normally, we’d be expecting about 400 tons,” Miles said on Monday. “But we would be certainly looking for 500-plus tons today.”

RVRA is well-equipped to handle the increase in household trash, which comes at a time when the weight of commercial waste is usually lessened due to shortened holiday business hours, Miles said.

The post-Christmas spike in trash collections is expected through the end of December and into the first week of 2021.

“We do see a significant increase in the tonnage that we are picking up from the Christmas and New Year holidays,” Blount said. “That usually continues into the end of January.”

The county’s recycling program sees a bump in usage as well, requiring employees to pick up extra recycling shifts for a weekend or two after Christmas.

“Our recycling centers see a large increase of people recycling the different paper and plastic products during the holidays,” Blount said. “That does keep us very busy this time of year.”

“There is always a large amount of trash after a holiday,” Stevens said. “As long as the equipment doesn’t fail, we can knock out two routes in one day with the additional equipment and workers.”

“During the holidays here when we have time off, we run double runs to keep ourselves on track,” Herndon said, explaining that Vinton trash collection routes pick up a day early before holidays.

The town adds extra workers to routes during this busiest season for garbage, and runs its bulk collection truck more frequently from Black Friday through the month of December to meet demand, Herndon said.

“It’s just extra, and it’s a little bit extra now lately because of the increase of online shopping,” Herndon said. “There’s a lot more Amazon boxes, or delivery boxes where people used to go out and go shopping. That’s where the volume comes in, is the package.”

In Roanoke, Solid Waste Management Division Director Jeffrey Powell said Tuesday that collections for city trash and recycling are up a few tons during the past two days, not unlike other years.

Christmas trees thrown out after the holiday are mulched by RVRA, as long as they are discarded without decorations still adorned, Miles said. After the holiday garbage rush, intake slows down again until the weather warms up.

“Typically during the warmer summer months we get more garbage,” Miles said. “We tend to see our numbers dwindle down during colder months.”

CASEY: Who should you report to the Democracy Stoppers Hotline?

I'm sure the FBI is getting swamped with thousands of tips as to the insurrectionists' identities. A case can be made that three congressmen from Western Virginia ought to be considered suspects.

Dozens of Virginia Tech athletes got COVID-19. Tech still won't say how many.

Though dozens of Virginia Tech football players contracted COVID-19 last fall, the public may never know the full extent of the virus’s reach into Tech athletics.

A proliferation of punctured packages and discarded cardboard overflow from a recycling container in Roanoke. Residential trash collections increase by 20% to 25% the first pickup day after Christmas, authorities said.