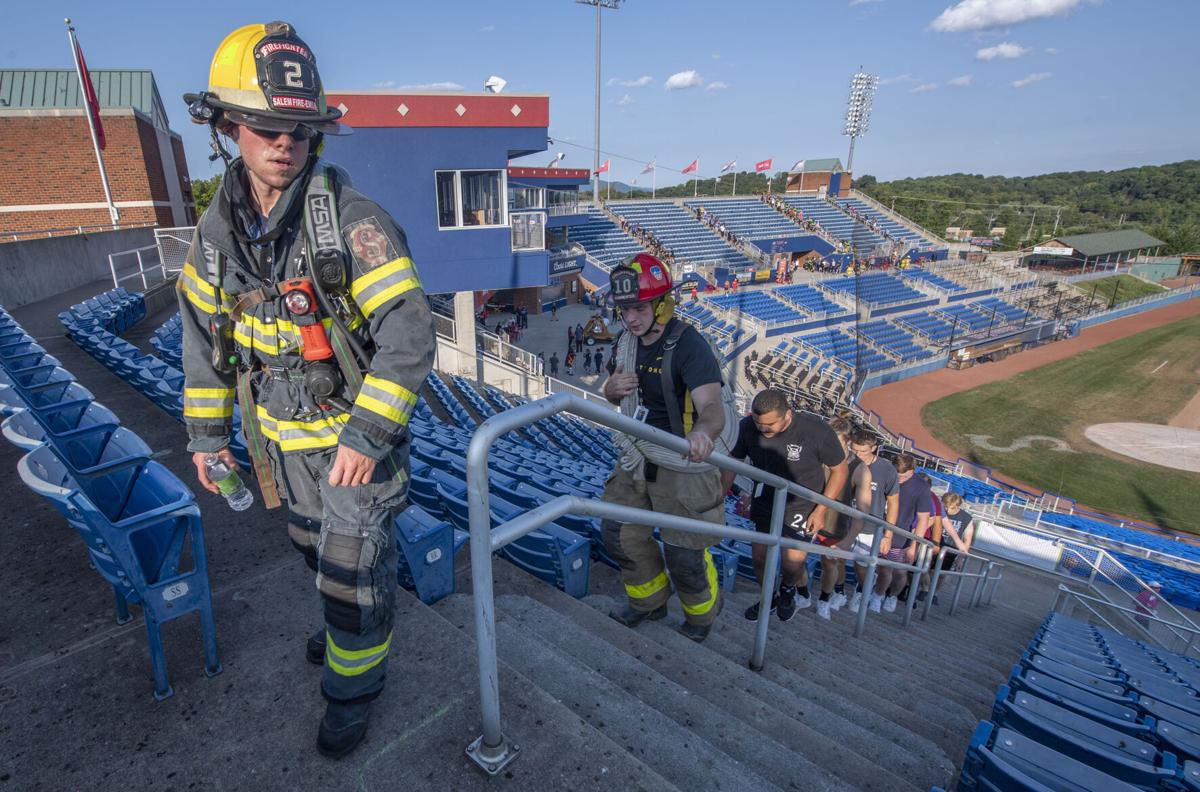 Hundreds of first responders, family members and patriots climb the stairs at the annual 9/11 Memorial Stair Climb at Salem Memorial Ballpark on Saturday. 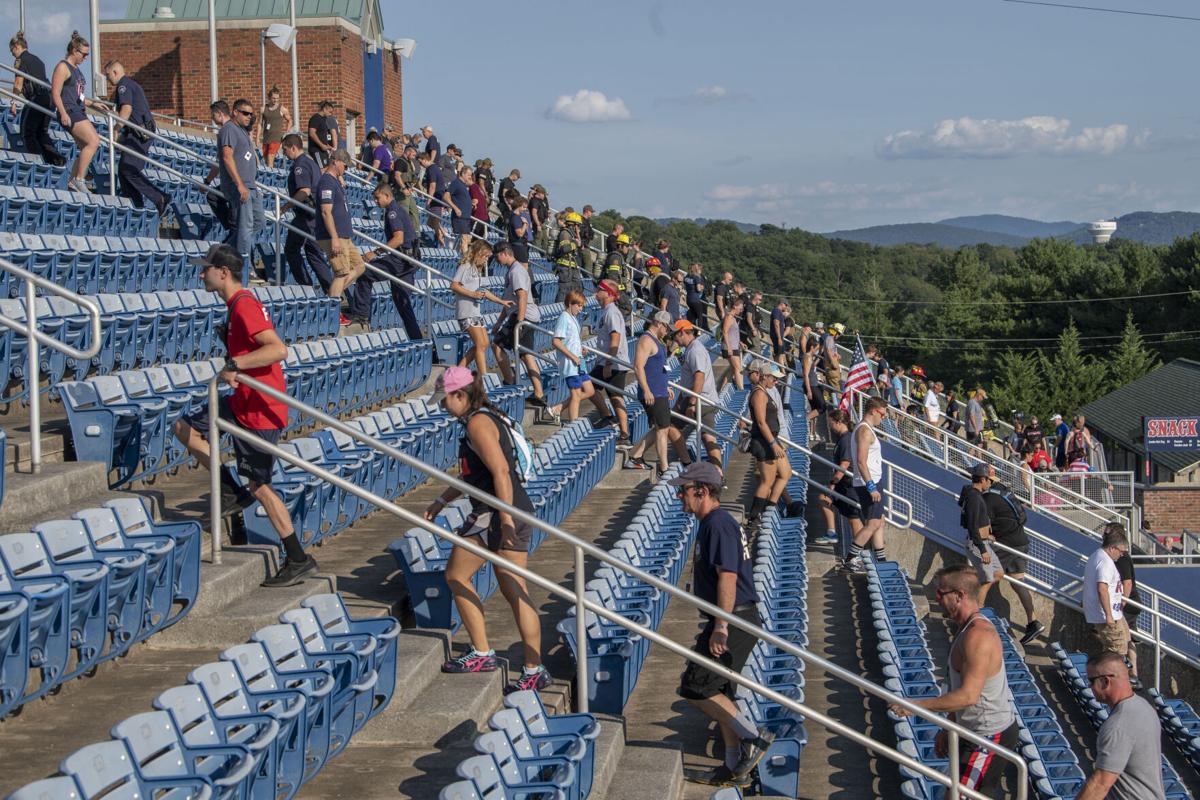 Hundreds of first responders, family members and ohers climb the stairs at the annual 9/11 Memorial Stair Climb at Salem Memorial Ballpark on Saturday. 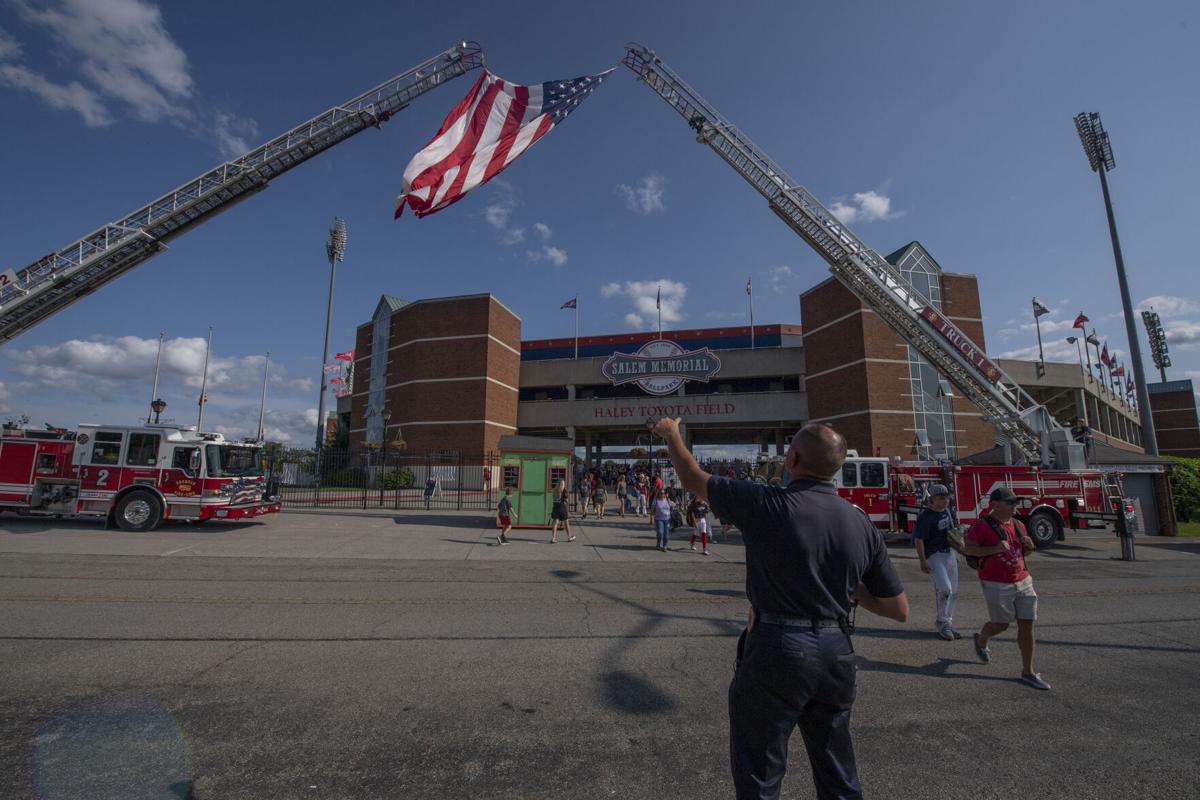 The main event Saturday evening at Salem Memorial Ballpark did not occur between two teams on the baseball diamond as usual, but among hundreds of people traversing up and down the stadium stairs, paying tribute to countless lives lost on and in the aftermath of Sept. 11, 2001.

Twenty years after the terrorist attacks, a crowd of mostly firefighters, police, emergency medical workers, other first responders, community members and their families gathered in Salem, remembering a day that killed almost 3,000 people, including 343 firefighters who responded at Ground Zero in New York City.

“We’re celebrating together this great act of heroism,” said event coordinator Pete Matthiessen, of Roanoke Fire-EMS. “You here have to decide for yourself why you choose to remember.”

In all, 271 participants registered to walk the equivalent of 110 flights of stairs. That’s the same number of steps that responding firefighters climbed to the top of World Trade Center buildings 1 and 2.

The stair-climbing procession at Salem’s ballpark snaked up and down from the left field stands, continuing behind the skybox, up and down again across to the stands in right field. Participants made that trek back and forth across the stadium, up and down its concrete bleachers four times each to account for all 110 flights of stairs.

At the end of their journey, participants rattled a big silver bell and read the name of a first responder who died in the aftermath of the World Trade Center attacks, keeping alive their memory and sacrifice.

Chad Riddleberger, a battalion chief for Roanoke Fire-EMS, said he participated Saturday evening in his seventh or eighth stair climb. He said the event brings a sense of togetherness to the larger firefighting community.

“We’re doing it in tribute to our brothers and sisters who paid that ultimate sacrifice,” Riddleberger said. “We don’t want to forget what happened. We want to make sure we remember that every day, not just once a year.”

“It’s very physically demanding, but it’s as much mentally demanding as anything else,” Riddleberger said. “I can’t imagine what they experienced on that day, trying to go where they needed to with all the chaos.”

Firefighters came from towns and counties in the Roanoke and New River valleys, and from places like Staunton, an hour and a half away. Staunton Fire & Rescue workers showed up for a second year, dressed like many other firefighting outfits: in full, 62-pound turnout gear.

“We’re honoring the fallen,” said Staunton Fire Lt. Justin Siron. “Every step you reflect more about the sacrifice they made that day. There’s a lot of steps to do that with.”

Ferrum Fire Lt. Edward Hodges said this year was his fourth time doing the stair climb. He said it takes him more than an hour to complete, and gives plenty of time for reflection.

“Just to know what they went through,” Hodges said. “How tragic it was, and how tough it was for them.”

At the front gates, two Salem firetrucks stood facing each other displaying a massive American flag that billowed on a line between their outstretched ladders.

“It’s the little things we can do to keep their memory alive each and every day, especially on this day,” said Andrew St Clair with Salem Fire-EMT. “It’s a hard experience, but it’s a worthy one.”

In previous years, the stair climb was held at the Wells Fargo building in downtown Roanoke. Due to coronavirus concerns, the last two stair climbs occurred outside at Salem stadium.

Photos: From the 2021 9/11 Memorial Stair Climb at Salem Memorial Ballpark

Hundreds of first responders, family members and patriots climb the stairs at the annual 9/11 Memorial Stair Climb at Salem Memorial Ballpark on Saturday.

Hundreds of first responders, family members and ohers climb the stairs at the annual 9/11 Memorial Stair Climb at Salem Memorial Ballpark on Saturday.