In Pulaski, a man's home on town land prompts discussion, rally
6 comments
Share this
{{featured_button_text}}
1 of 5 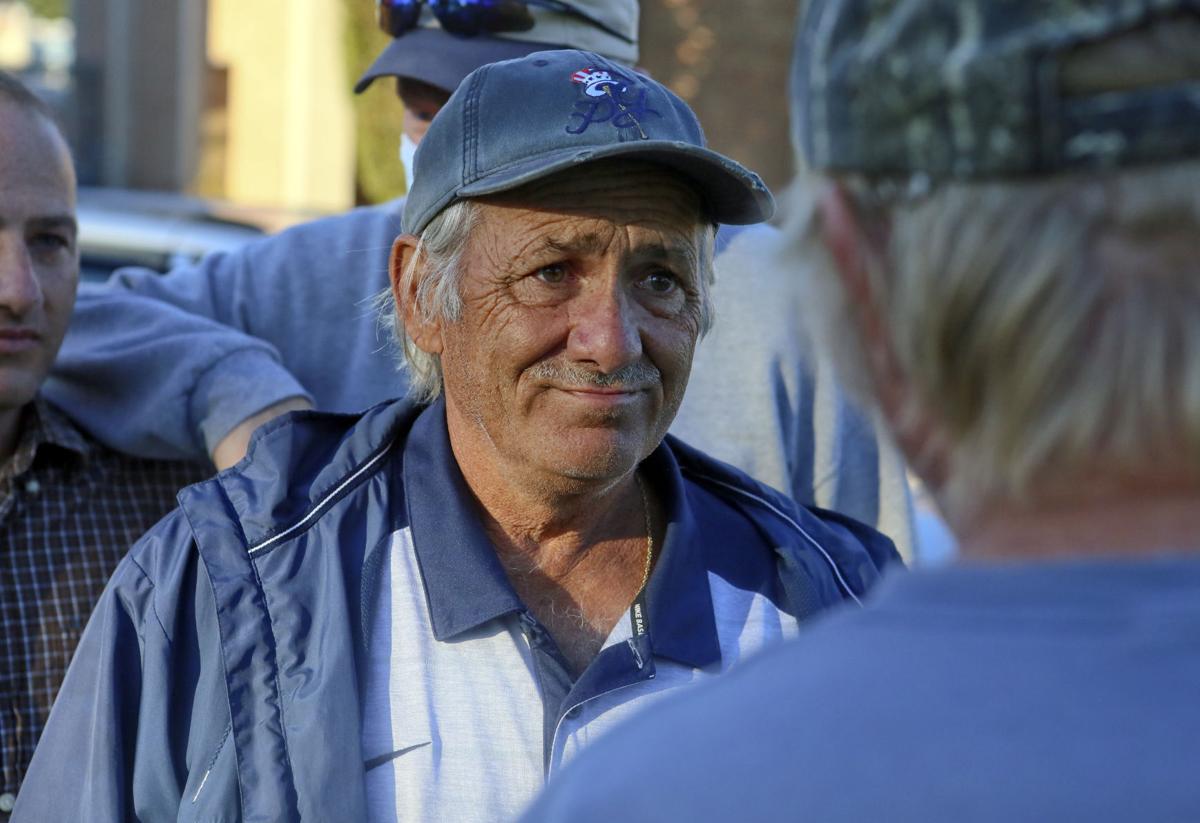 Gary Martin is facing possible eviction from his home at Pulaski’s MacGill Park where he has lived for more than four decades. 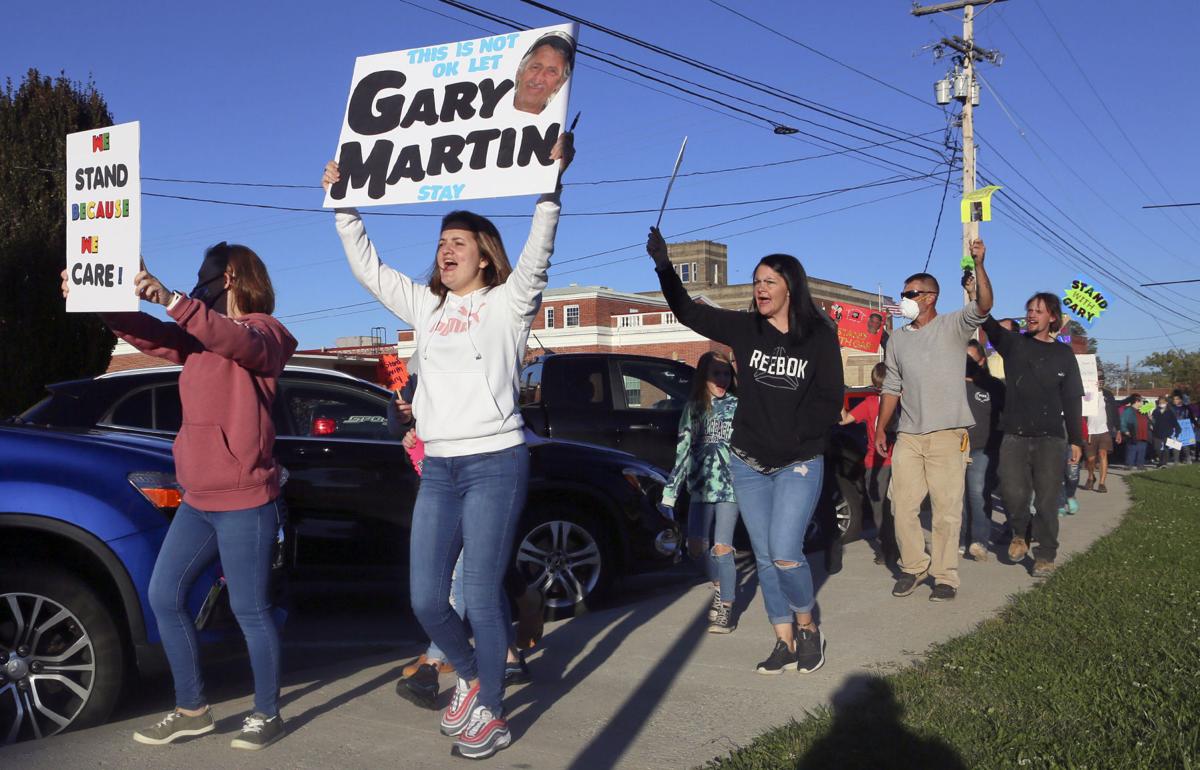 Daughter Amanda Martin (left) and niece Carman Dunagan (right) lead a rally of more than 50 people Tuesday in Pulaski in support of Gary Martin’s request to keep his residence on town property. 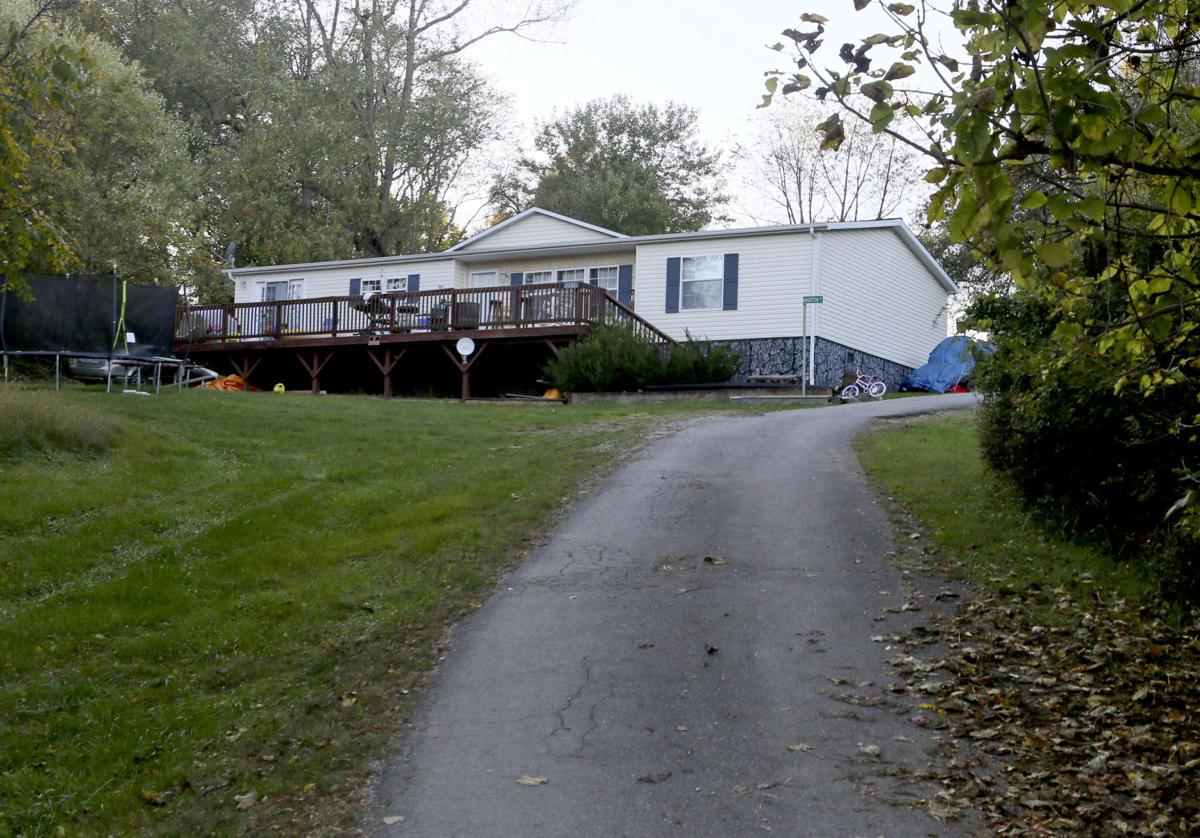 Gary Martin has been living in a home at Pulaski’s MacGill Park for more than four decades. Martin, a town employee from 1975 until he retired at the end of 2015, said he made a “handshake” deal in 1981 that allowed him to put his trailer there. 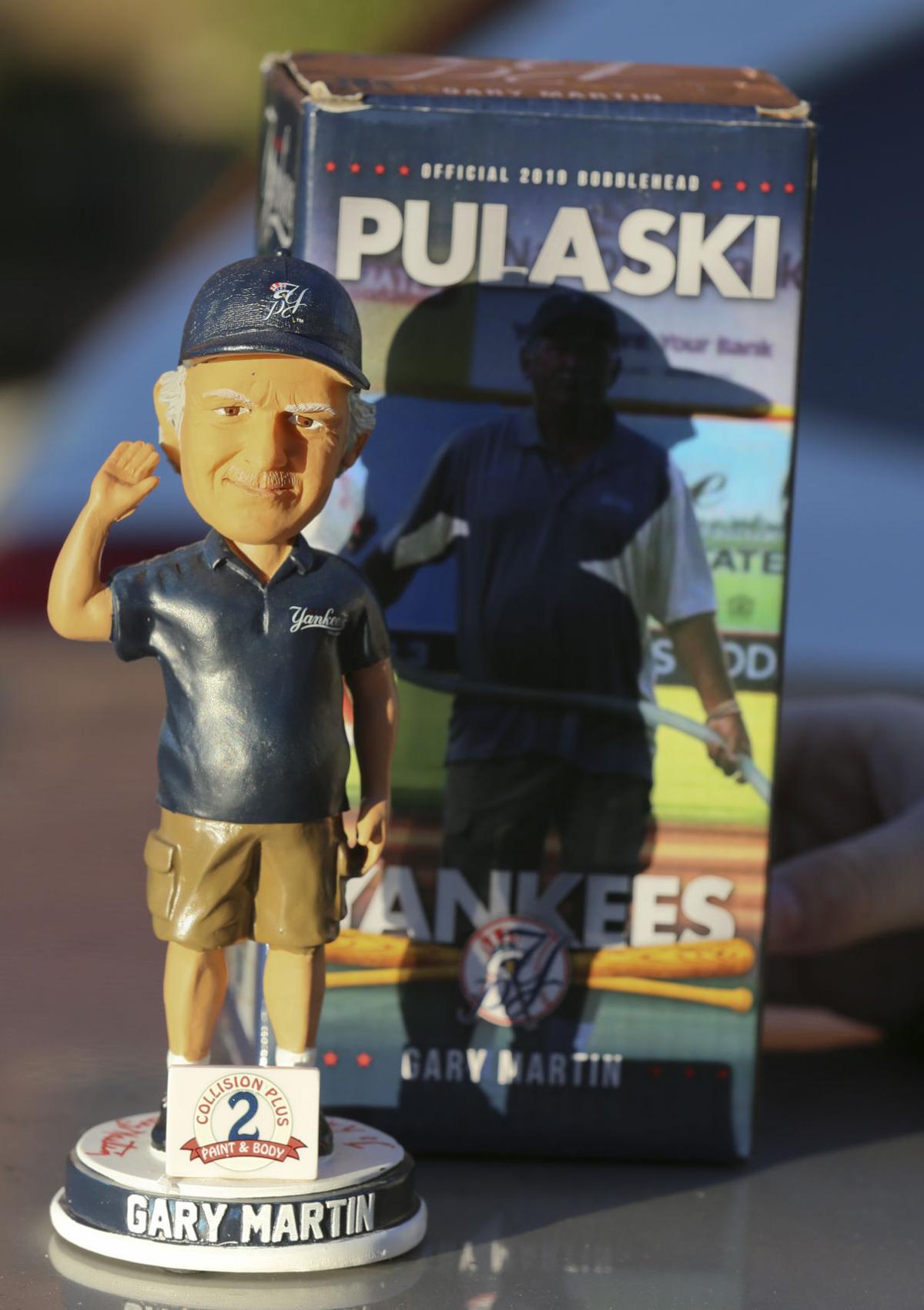 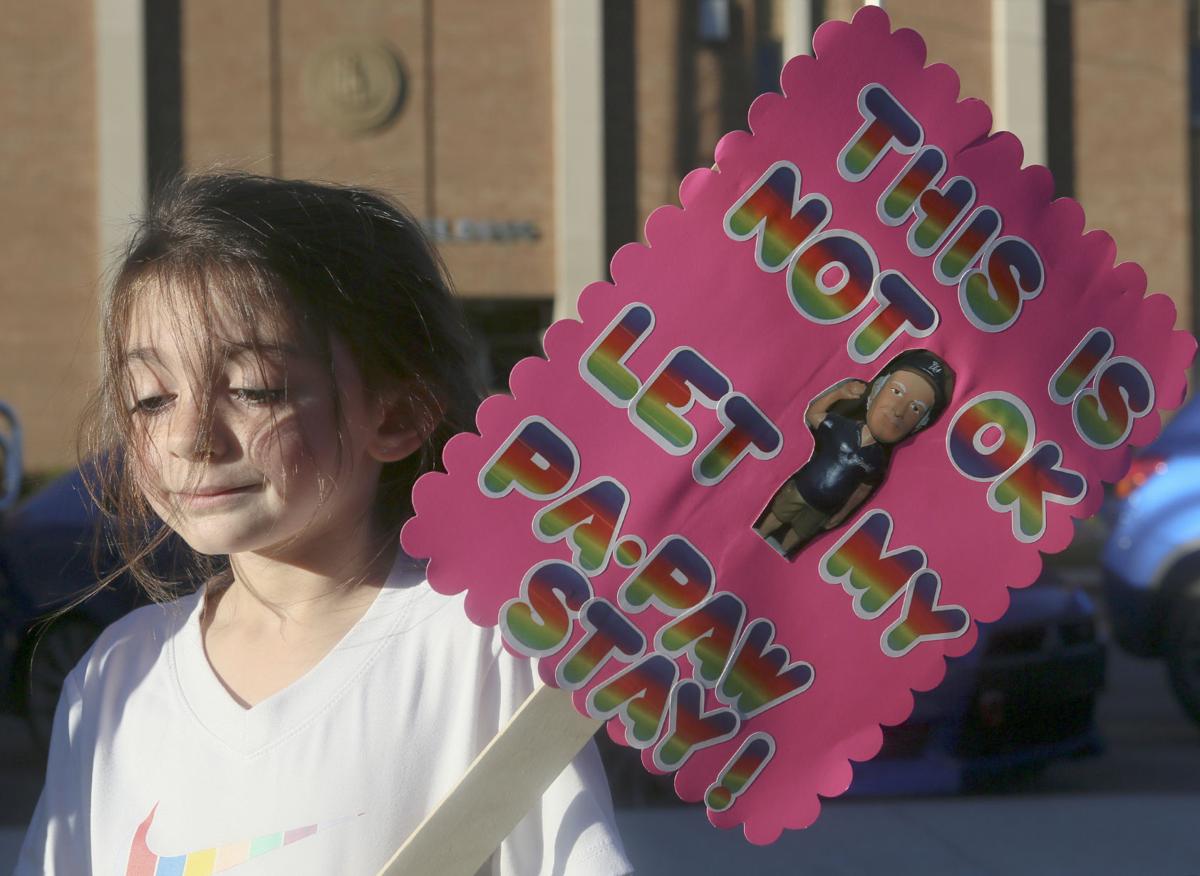 PULASKI — Gary Martin has called a small plot of land at MacGill Park his home for nearly 40 years — but that may not be the case for much longer.

Martin — a town employee from 1975 until he retired at the end of 2015 — said he made a “handshake” deal in 1981 with the head of public works that allowed him to put his trailer on a portion of the just over 10-acre park in exchange for him watching over and maintaining the property in addition to his regular duties with the parks and rec department.

The park has dwindled over the years and doesn’t get much use now, which is what first drew attention to Martin’s living arrangement, according to interim Town Manager Darlene Burcham.

Burcham said in an interview this week that she was first made aware of the old park after a citizen complained about the condition of the tennis court and skate park. She said they were essentially unusable after years of neglect and vandalism.

After telling the current public works director to demolish the two blighted areas, she said she continued her tour of the rest of the property, where she discovered the trailer that town employees told her Martin had been living in for some time.

That’s when she went back to her office and began looking into the matter.

“I dug through what records I could find and could find no evidence that he was living there with the approval of the town. He was not paying any rent. I found that he’d been paying for water since only July 2016 yet he’d been living on the property for many, many years,” she said. “So I sent a notice stating I found no record of his approval or authority to live there and I gave him 30 days to vacate.”

Burcham said after sending the notice in late September, Martin showed up at her office with no documentation to say he had an agreement with the town but did reiterate he’d spoken with past town managers about purchasing the portion of the property he lived at, but nothing ever came to fruition, a point Martin also acknowledged to be true in a conversation with The Roanoke Times Tuesday evening.

Following the conversation with Burcham, Martin and his daughter Amanda Martin appeared at a town council meeting last week to discuss the sudden eviction. Gary Martin produced a document from 2007 that was signed by the town allowing him to upgrade his trailer from a single to a double-wide on the Lynwood Street property, which was required by the company that sold him the trailer since Gary Martin did not own the land it now sits on.

However, the document states that he would have to leave the property no later than 60 days after no longer working for the town.

The council assured him he would not have to leave the property within 30 days while the matter was still being sorted out. Martin said he’s since been told he needs to bring an updated timeline to the town before the issue could potentially be reconsidered.

Since the meeting, Martin’s sudden notice has become a focal point for the community, with overwhelming support on social media for the town to sell Martin — who many say is a community fixture and even a local celebrity to some degree — the patch of property at the residence he and his family have called home for decades.

A rally was held Tuesday night in support of Martin in front of the town’s municipal building with 50 residents there to support him, holding signs and chanting things like “This is not OK, let Gary Martin stay.”

Martin — who has also worked for years at Calfee Park where the Pulaski Yankees minor league baseball team plays, even getting his own night at the ballfield, including giving away bobbleheads featuring his tan, mustached face — said he was thankful for the outpouring of support and wasn’t looking for a handout.

“I just want to buy the piece of property that I raised my family on,” he said, noting that’s where one of his daughters, Amanda Martin, and her three daughters also live. “It’s the place everybody in my family comes to and we all love it there.”

Martin, 65, said he pays utilities and water and also has a mailing address at his current residence. He said there has not been a problem with him occupying the area until now.

Martin said that even being given more time to make arrangements, it is going to be very hard to move the trailer that sits at the top of the park’s gravel road, which looks more like a permanent modular home than something that can just be towed away.

“Ideally they would let us buy the land but we at the very least need a fair amount of time to make arrangements to move if that’s what the town decides to do,” Amanda Martin said at Tuesday’s rally.

Burcham, who has gotten a fair share of the blame online, said ultimately it is not up to her, but a matter that has to be voted on by the town council.

“We are waiting on them [the Martins] to come back to me with a new proposal, which I will then send to council to look over,” she said.

Mayor Shannon Collins was at the rally Tuesday, because he said he cares about Martin’s situation.

Collins, a local produce stand owner who began his first term as the town’s leader in July, said he believes council will find a solution that is fair.

He reiterated that the initial vacancy notice was just a way for the town to start a paper trail on the matter. He said “it will absolutely not happen,” when asked if Martin would be forced out at the end of 30 days.

“I believe we’ll find an outcome that’ll be good for everyone involved. I really do,” he said Tuesday evening. “We’re looking at all options right now. I’m not making any promises of what’s going to happen because I don’t know. I’ve got six councilmen that have to vote on it.”

Gary Martin also said that Yankees owner and real estate developer David Hagan told him he could rent a plot of land next to the stadium if needed.

Hagan would not confirm his arrangement with Martin on Wednesday afternoon, stating that it was a “personal matter” between him and Martin.

Gary Martin is facing possible eviction from his home at Pulaski’s MacGill Park where he has lived for more than four decades.

Daughter Amanda Martin (left) and niece Carman Dunagan (right) lead a rally of more than 50 people Tuesday in Pulaski in support of Gary Martin’s request to keep his residence on town property.

Gary Martin has been living in a home at Pulaski’s MacGill Park for more than four decades. Martin, a town employee from 1975 until he retired at the end of 2015, said he made a “handshake” deal in 1981 that allowed him to put his trailer there.