Roanoke mayoral candidates David Bowers (left) and Sherman Lea participate in a virtual debate Wednesday, seen in this screen capture. The candidates spoke about their vision of a Roanoke after the pandemic. 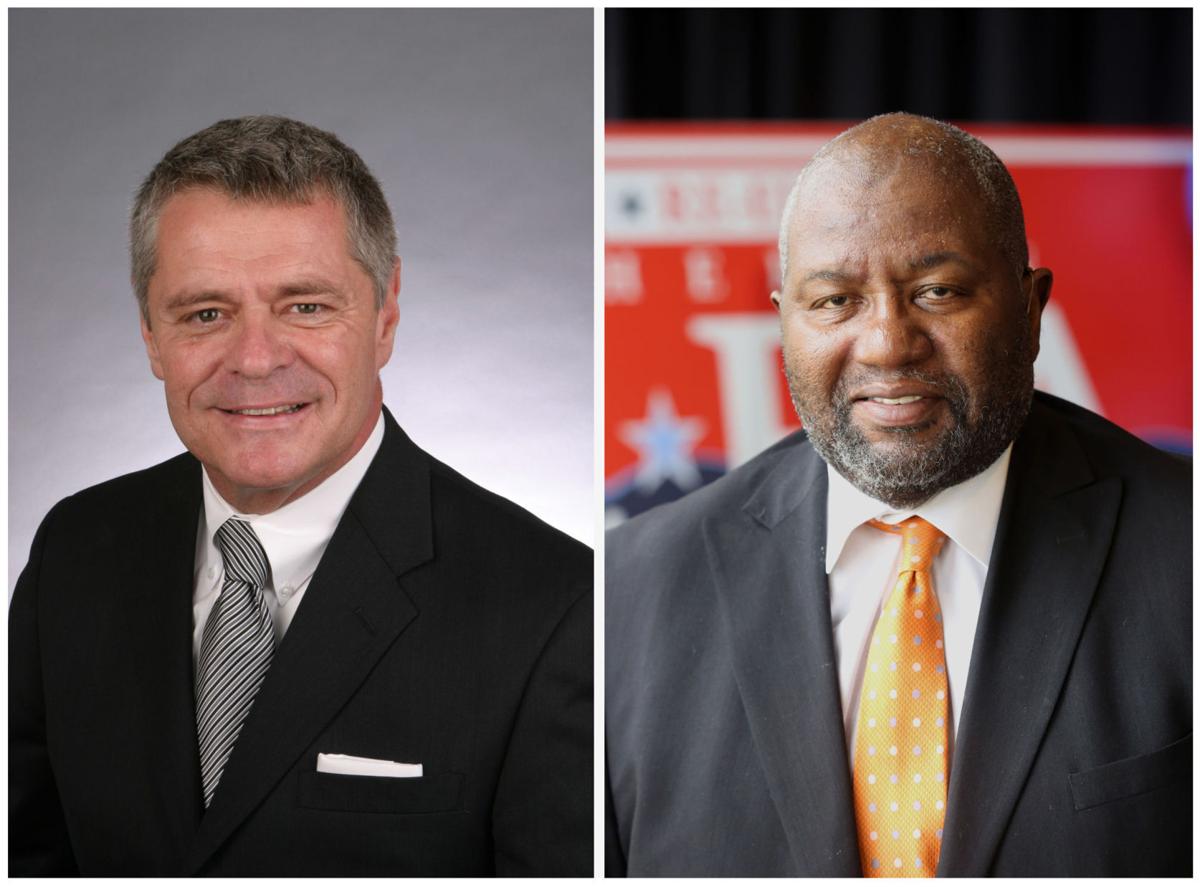 Roanoke Mayor Sherman Lea and challenger David Bowers discussed where to put a new bus station, ways to combat gun violence, how to pull the city out of the COVID-19 crisis and other pressing issues during their debate Wednesday afternoon.

Lea, a first-term incumbent Democrat elected in 2016, urged Roanokers to stay the course, reminding voters that, before the pandemic, Roanoke had been on an economic and tourism upswing.

The two candidates sat several feet apart at a table inside Charter Hall on the third floor of the Roanoke City Market Building, as members of the Roanoke Kiwanis and media watched via the Zoom videoconferencing platform.

The Kiwanis Club of Roanoke sponsored the debate, one of the few debates this campaign season and one that happened less than three weeks before the Nov. 3 election, as many Roanokers are already voting early. About 12,000 people have already cast ballots, either in person or by mail, nearly 19% of all registered voters in the city, according to Roanoke registrar Andrew Cochran.

Both men answered four questions from moderator John Montgomery in a debate that was relatively reserved but did feature sharp differences, especially when it came to public safety and the bus station.

When asked by Montgomery to address a recent spike of violent, gun-related crime in Roanoke, Bowers pointed to 32 staffing vacancies in the Roanoke Police Department, while repeating that he “would not defund the police” but would “refund the police” and support other municipal employees.

He said that Roanoke police officers are paid less than officers in other nearby communities, including Lynchburg, Blacksburg and Christiansburg. Bowers said Lea and city council members had been silent about the increase in crime and gang activity until a recent news conference at the Roanoke Star that Bowers described as a “campaign-style event.”

That news conference on Oct. 1 was when Roanoke Police Chief Sam Roman, Lea and other officials announced that 138 people had been arrested during Operation Street Sweeper, a two-week wave of arrests made by local law enforcement and U.S. Marshals.

Lea noted that although some violent crimes have increased this year, overall crime numbers have trended downward.

In addition to Operation Street Sweeper, which he said also took 18 guns off the streets, he pointed to his work forming a local gun violence task force, his visits to neighborhoods with former Chief Tim Jones and his long career in corrections as examples of his commitment to public safety. He said efforts to improve neighborhood policing are continuing.

“I made it clear, we’re not defunding police officers,” Lea said.

Reached a few hours after the debate, Bowers said that former chief Jones was his source for statistics related to police department job openings and salaries. Police spokeswoman Caitlyn Cline confirmed the number of vacancies, but said she could not make salary comparisons with other departments.

She emailed a link to a current department opening that includes a $38,639.75 starting salary. Lynchburg’s city website shows a starting salary of $40,019.20.

On the topic of building a new bus station downtown, Lea said he wants to stick to the city’s plan of locating the station in the former Brandon Parking lot along Salem Avenue and Third Street Southwest, near the Virginia Museum of Transportation.

That plan was decried by business owners and residents in that area, and a request for a zoning special exception was denied by the board of zoning appeals in August.

The city wants to change a zoning ordinance that would allow the station to be constructed at that location anyway.

Lea said he backed that effort and called the BZA’s decision “incorrect” and said that the board was “legislating. … That’s not what they are called to do.”

Bowers praised the BZA’s decision and repeated his idea to keep the bus station at its current location at Campbell Court near the City Market, but to renovate the facility, reroute buses along Salem Avenue, close the Campbell Avenue entrance and open that part of the building for possible businesses.

He said that Lea and the current council want to rewrite zoning rules after the defeat before the BZA, calling the city’s plan “ill-conceived, poorly planned and badly implemented.”

Both men praised Roanoke leaders and employees for guiding the city through the COVID-19 pandemic and attempting to ameliorate the economic damage caused by shutdowns. Roanoke received nearly $9 million in CARES Act funds, plus another $2 million in federal funding.

Lea credited the city council with seeking input from residents when it approved spending plans for the funds.

“We’re doing well in this, because citizens directed us where to place the money,” Lea said.

Bowers said that he was happy that the city had prioritized needy families and nonprofits, but he would have liked for the city’s two public swimming pools to have opened this summer. Both were closed due to the pandemic and city budget cuts.

Near the end of the 40-minute debate, both men summed up their cases by looking to a future beyond the pandemic.

Bowers, who wore a mask when not speaking, mentioned his prior 16 years as mayor, but added that the last four years away from city government had given him “fresh energy” and “new ideas,” and he said that “an election is not about the past, it’s about the future.”

Lea ticked off his years of service as vice mayor, school board chairman and other civic roles, and reminded debate watchers that Roanoke had been doing well before the pandemic.

The candidates will debate again in an online forum hosted by the Roanoke Regional Chamber on Oct. 22 via Zoom.

Gastro pub The Maroon Door is set to open in downtown Blacksburg next Friday.

Now in sight, The Vue to add to Blacksburg housing

One of the latest larger housing complexes in Blacksburg - where the issue is always in play - will be called The Vue, a project that's now underway off South Main Street.

Because of the pandemic, many eight-year driver's license holders can renew online for two years, rather than fight to get an appointment at the DMV. But that doesn't apply to everyone.

Wedding at Wintergreen Resort leads to quarantine of 20 employees

A recent wedding held at Wintergreen Resort has resulted in multiple employees being quarantined because of possible exposure to COVID-19 and some staff have tested positive.

Roanoke mayoral candidates David Bowers (left) and Sherman Lea participate in a virtual debate Wednesday, seen in this screen capture. The candidates spoke about their vision of a Roanoke after the pandemic.