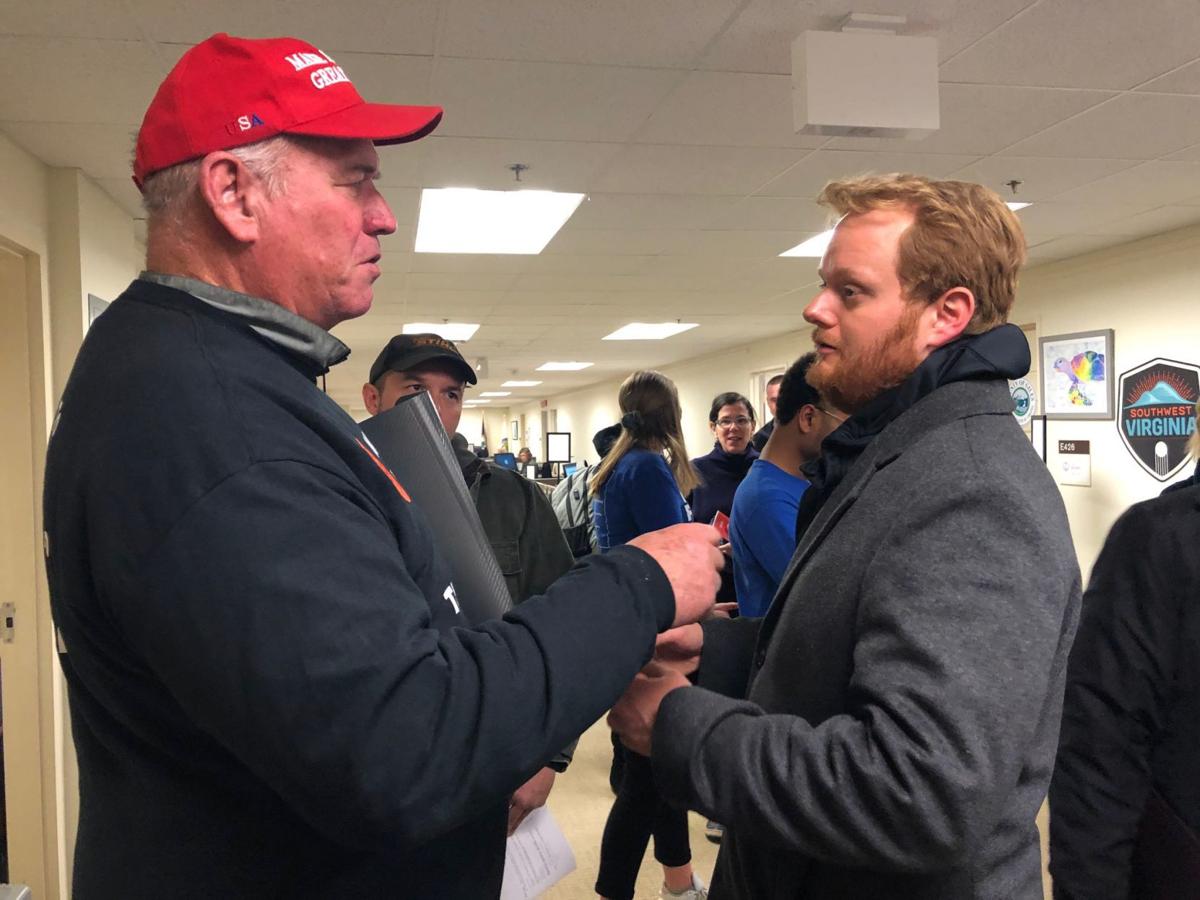 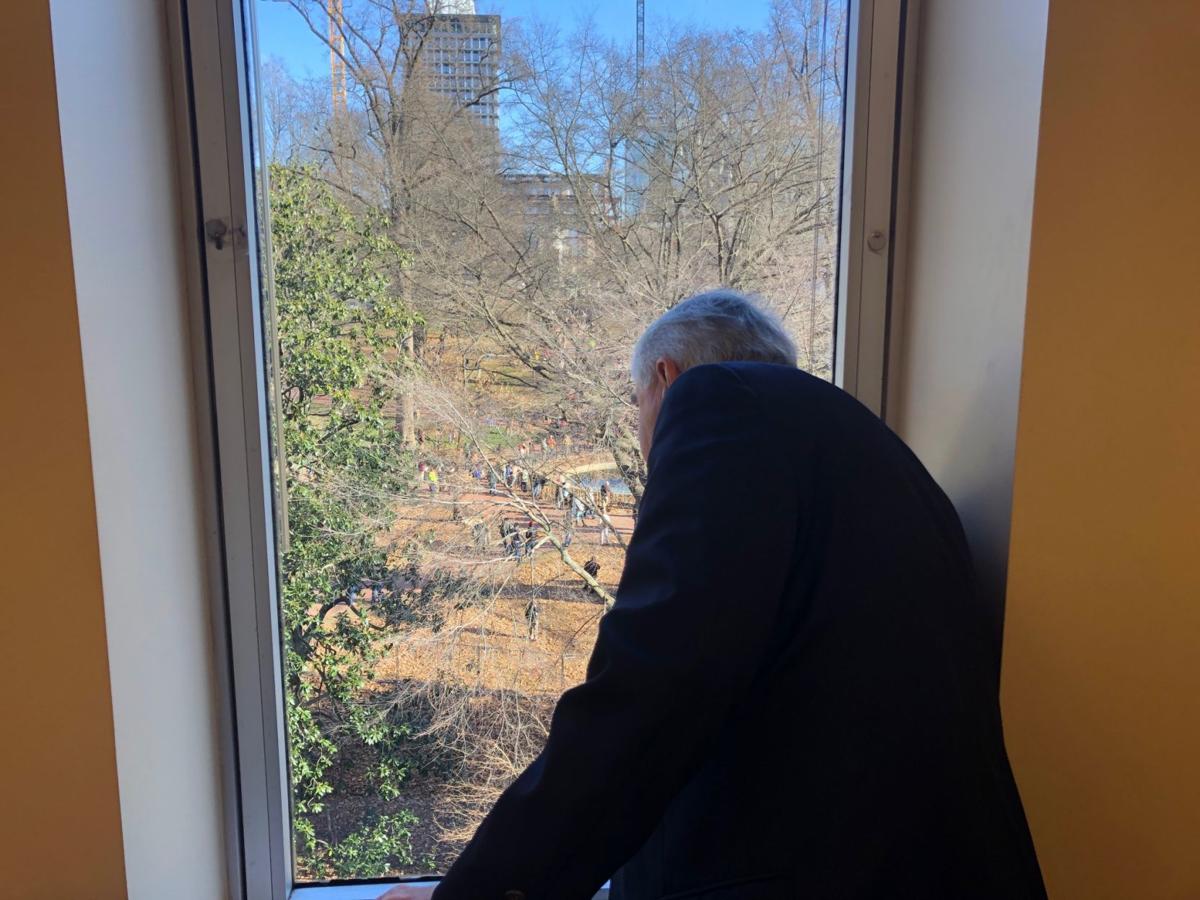 Sen. John Edwards, D-Roanoke, looks outside his office window at the thousands of gun rights advocates gathered outside the Capitol.

RICHMOND — Sen. John Edwards, D-Roanoke, sat in his office with the door open as gun rights advocates wandered through the hallways.

“Everybody has been very polite,” Edwards said. “We’ve had plenty of productive conversations. I wish there was a little less misinformation and hyperbole, because I spent quite a bit of time addressing that.”

Every several minutes, loud cheers came from outside his window overlooking Capitol Square, where thousands of people wearing “Guns Save Lives” stickers and carrying firearms were gathered. He got up a few times to take a look.

Monday was the traditional day that people come to the Capitol to lobby lawmakers about issues important to them. Gun control has dominated this year’s General Assembly so far, and Monday was no different. Still, lawmakers said the display happening outside was unlikely to alter what was coming this General Assembly session: gun control.

There wasn’t much lobbying happening in the building that houses lawmakers’ offices. Some lawmakers said they figured people already know their positions.

Sen. Jeremy McPike, D-Prince William, had an extensive sit-down with some gun rights advocates in his office.

“There needs to be a reasonable discussion about gun safety,” McPike said.

McPike and a man both talked about a need for more public education about gun safety.

“Those are things we’re not very far apart on,” the man told him.

Sen. Mark Obenshain, R-Rockingham, handed out #2A stickers and urged to those upset over the looming gun control bills that they need to become more politically active. He told them to make sure their friends and family were registered to vote. Several people surrounding him said Democrats who represent them ran unopposed last fall.

“We’ve got to get people and encourage them to run,” Obenshain told them.

Among proposed legislation are bills requiring the reporting of lost or stolen firearms, imposing a 15% tax on gun and ammunition sales to support a gun violence prevention program, banning people with a restraining order against them from possessing a firearm and subjecting anyone who recklessly leaves a loaded, unsecured firearm near anyone under 18 to a Class 6 felony.

Some of the proposals have broad support, according to polls.

The Senate is also expected to vote this week on a bill to allow courts to temporarily remove guns from someone deemed a risk to himself or others. Democrats had been delaying a vote on the bill to remedy a dispute over language in the bill related to the seizure of firearms.

Sen. Joe Morrissey, D-Richmond, forced the delay on the bill on the floor by offering a different version.

“I said I wouldn’t support the bill as it was,” Morrissey said.

He and Sen. Scott Surovell, D-Fairfax, say they’ve reached an agreement on what the final version of the bill should be.

About a dozen people were always standing outside the office of Del. Mark Levine, D-Alexandria, the patron of a bill to expand the definition of assault weapons and prohibit the ownership of them.

A few Democratic lawmakers have said it’s very unlikely that an assault weapons ban will pass the legislature this year. They think the issue is too complicated to come up with a solid bill this year.

Gun control activist Andy Parker did not take the large crowd outside of the Capitol as any indication that the proposals weren’t what most Virginians wanted.

Democrats have scheduled a batch of Republican delegates’ pro- gun-rights bills to be heard Tuesday morning before a House panel that was previously known for rejecting gun control bills. Legislation includes allowing people to carry weapons in places of religious worship and a bill expanding the places where a person with a concealed handgun permit may lawfully carry a handgun.

Joe McClung, 70, and Aaron Perdue, 37, both drove from Giles County to talk to lawmakers about their opposition to gun control.

They met with Del. Chris Hurst, D-Montgomery, outside his office. He tried to assure them that the measures likely to pass won’t impede their lives.

“Come July, I don’t think the world is going to turn upside down,” Hurst said.

Sen. John Edwards, D-Roanoke, looks outside his office window at the thousands of gun rights advocates gathered outside the Capitol.