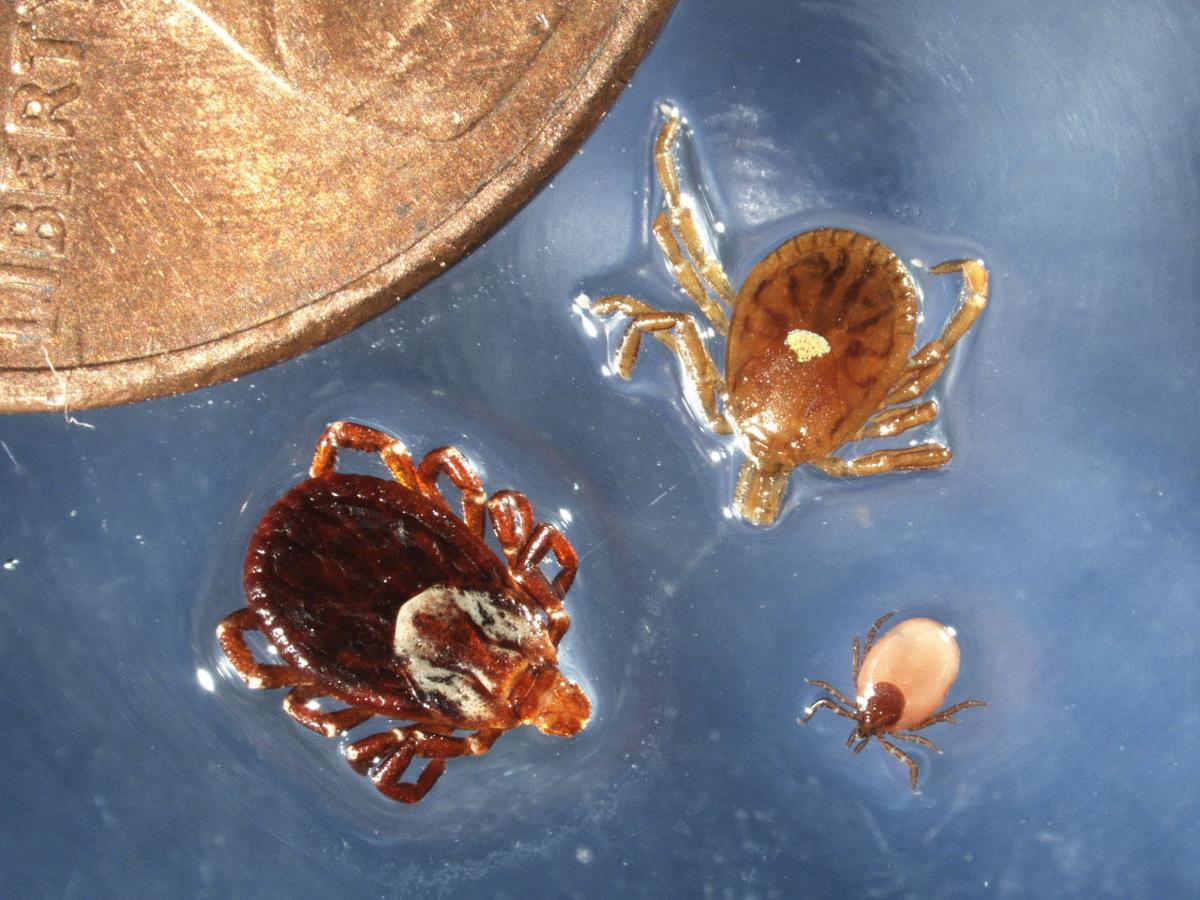 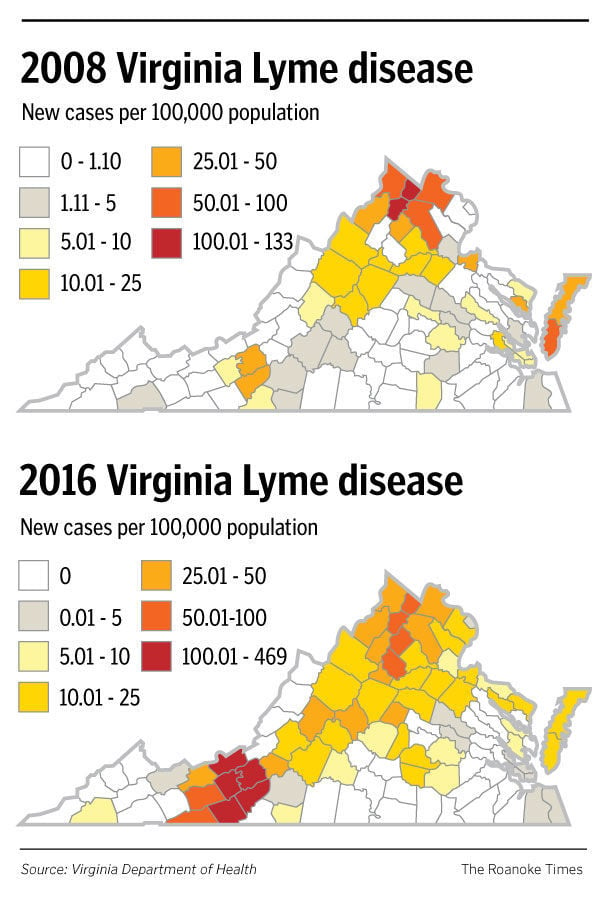 An earlier version of this story had an incorrect figure for the number of eggs laid by a female black-legged tick.

A greater percentage of people living in the New River Valley last year were diagnosed with Lyme disease than anywhere else in the state, the Virginia Department of Health reported.

Lyme disease remains one of the top communicable diseases in Virginia and, excluding chronic hepatitis C, ranked No. 1 in 21 localities. Most of those are in New River Valley and Northern Virginia. Floyd County had the highest infection rate in the state and was more than double that of runner-up Pulaski County.

Jory Brinkerhoff, a biologist at the University of Richmond who studies ticks, said not only is the population of black-legged ticks rising in the New River Valley but that one of every two adult ticks tested carried Lyme disease. Elsewhere, the infection rates of ticks are 20 percent to 25 percent.

Though physicians and labs are required by state law to report each Lyme diagnosis, not all do. Nor are all cases that are reported counted.

The health department’s preliminary report for 2016 indicates that Lyme disease cases may be on the decline in Northern Virginia, but that could be attributed to a falloff in reporting rather than to fewer illnesses.

“I don’t think there’s a decline,” said David Gaines, state public health entomologist. “Not all health districts do as good of a job reporting.” There aren’t enough epidemiologists to document all the Lyme cases that come in, especially when they are also tasked with handling other communicable diseases.

Virginia documented 1,346 cases of Lyme in 2016. The Centers for Disease Control report more than 30,000 cases of the disease are reported each year, but that the actual number is more likely 10 times as many.

Nearly all of the cases occur in northern states, but in recent years the disease has spread through the mid-Atlantic states, appearing first in Northern Virginia and then marching its way southwest to the New River Valley.

Gaines said as human population grows and suburbia expands, so does the deer population and with it, ticks. Without deer, black-legged ticks, the only carrier of Lyme, wouldn’t stand a chance.

“Deer are the Carnival Cruise Line of the tick world,” Gaines said. It’s the only place that black-legged males and females hook up so the female can lay fertilized eggs — between 3,000 and 4,000 of them. A large percentage of the eggs survive, he said.

Deer, too, have served as a Trojan horse for ticks possessing a northern aggression.

Holly Gaff, with Old Dominion University, studies ticks and diseases. She said the black-legged or deer tick has always been in Virginia, and it has always carried Lyme disease.

But the southern variety is rather lazy, staying on the ground and hovering under leaf litter. You’d have to sit on one for it to bite you.

The northern variety — which looks identical — is rather aggressive. It climbs onto vegetation slightly above the ground and will climb onto the ankles of passers-by. She and Brinkenhoff plan next summer to transplant the two types into each other’s environment to help determine whether genes or environment causes the behavioral change. Others are finding that the northerners are just born more aggressive regardless of where they end up living.

Brinkerhoff said there is so much yet to be known about the ticks and the diversity of the strain of bacterium, and whether a variation detected in New River Valley ticks leads to more infections or whether the ticks in their nymph stage are feeding on small mammals that are better at transmitting the disease than those living elsewhere.

Gaines often participates in the researchers’ work, but the state does not have a surveillance system to determine whether the population of ticks is growing or whether the percentage of ticks carrying Lyme is changing.

That’s why education and prevention are so important, Bordwine said.

“There are so many cool things to do outside, as an epidemiologist, I ask myself every day how can I help to get information to people,” she said.

That’s a question Mauricia Shanks of Giles County helps to answer. Shanks found a tick in the bend of her leg in 2009 before the rise of Lyme in the New River Valley. Her flu-like symptoms were misdiagnosed, and with the Lyme left untreated led to a number of health problems.

Since then she has collected ticks for researchers and counseled all she encounters to become aware of the disease.

“I want doctors to think of tick-borne diseases first, not last,” she said. “My goal is not to scare anyone from being afraid to go outside, just that they should be aware and look at themselves and their kids. Look between the toes, the armpits.”

The black-legged tick is about the size of a grain of pepper and easy to miss, she said.

They’re also hard to kill en masse since an insecticide to kill ticks alone has yet to be developed. Culling deer could help, but Gaines said an extended hunting season and hiring of police sharpshooters hasn’t helped in Fairfax. It still has the highest per capita of deer in Virginia.

Floyd County doesn’t look anything like suburbia, but the lifestyle of people living in the woods and off the land exposes them to ticks.

“You see tepees and yurts, mostly forested land and in a high elevation that’s a nice environment for the black-legged tick,” he said.

ODU’s Gaff this summer is studying whether a tick-collecting robot designed by Virginia Military Institute professors can keep ticks from biting children at a daycare center that in the past has been overrun with them.

The robot sweeps the lawn twice a week. It’s hard to prove the absence of something, she said, but reports of tick bites are down.

Several years ago she used the robot developed by a team led by VMI professor James Squire on a nature trail and found it was effective in removing most of the ticks from a treated area for 24 hours.

It mostly collected lone star ticks, which are the most prevalent in Virginia, and which tend to be travelers.

“If you clear out an area of deer ticks, it should stay clear,” Squire said.

While the robot shows promise, he said, they have yet to tap into a funding source to develop it further.

Gaff is using her budget to do the daycare experiment as grants are hard to find for tick research.

“It’s very chilling how little money there is to study ticks,” she said.

Federal grants have contracted since the recession. Squire is also running the robot in Texas to collect cattle ticks that attach to livestock and hang on for life, turning the host anemic and killing it.

The tick rover is working, he said. “The biggest problem is whether in the current budgetary climate, the USDA would have funds to pursue it.”

Squire said for about $250,000 the prototype could be re-engineered for commercial use and then used by small businesses to contract with property owners to periodically sweep for ticks.

“I don’t go through a week of work in my life that I’m not getting email from someone begging to buy it,” he said.

BLACKSBURG — Ottoline Bushey doesn’t know when she was bitten by the black-legged tick that gave her Lyme disease last July, but she said she’…