'Militia ... not a scary term,' says commander of Bedford County Militia at its second annual muster
16 comments
Share this
{{featured_button_text}}
1 of 3 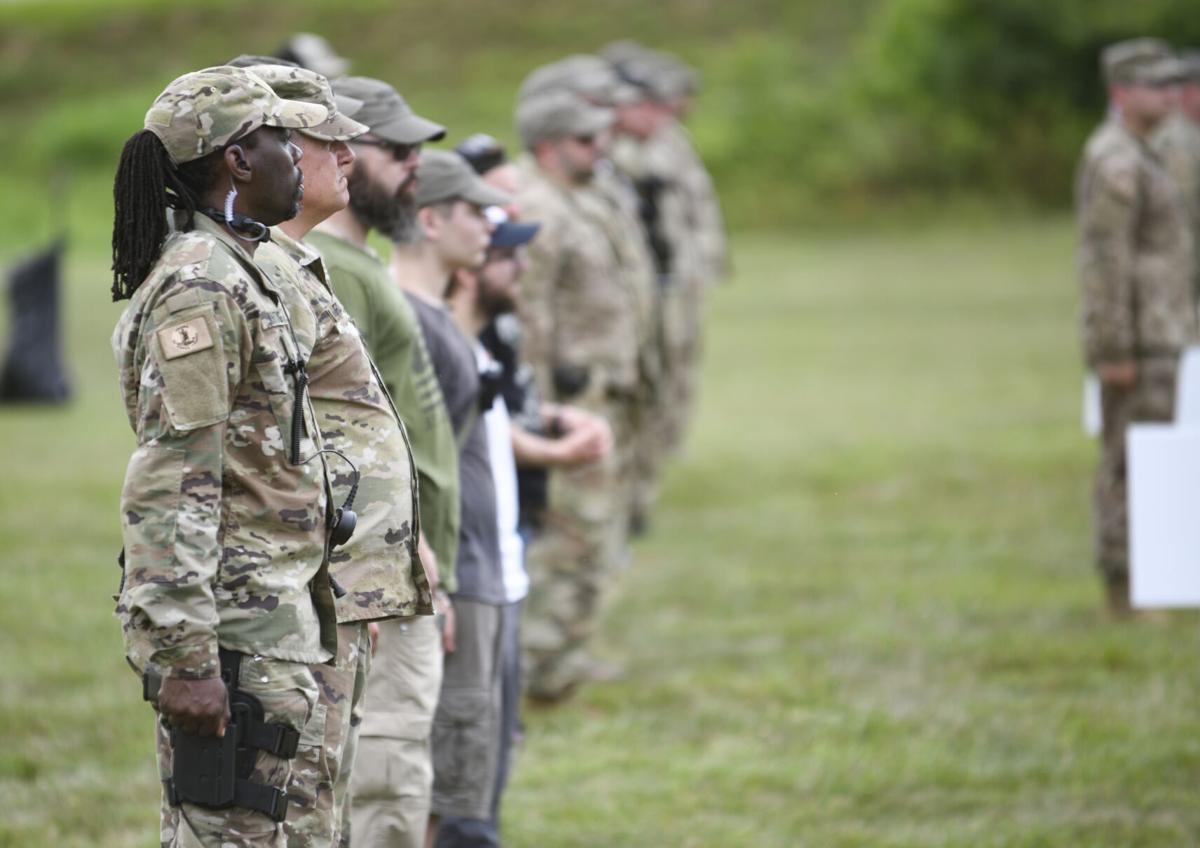 Members of the Bedford County Militia stand in formation as the self-styled company gathered for a muster and membership drive in Montvale on Saturday. 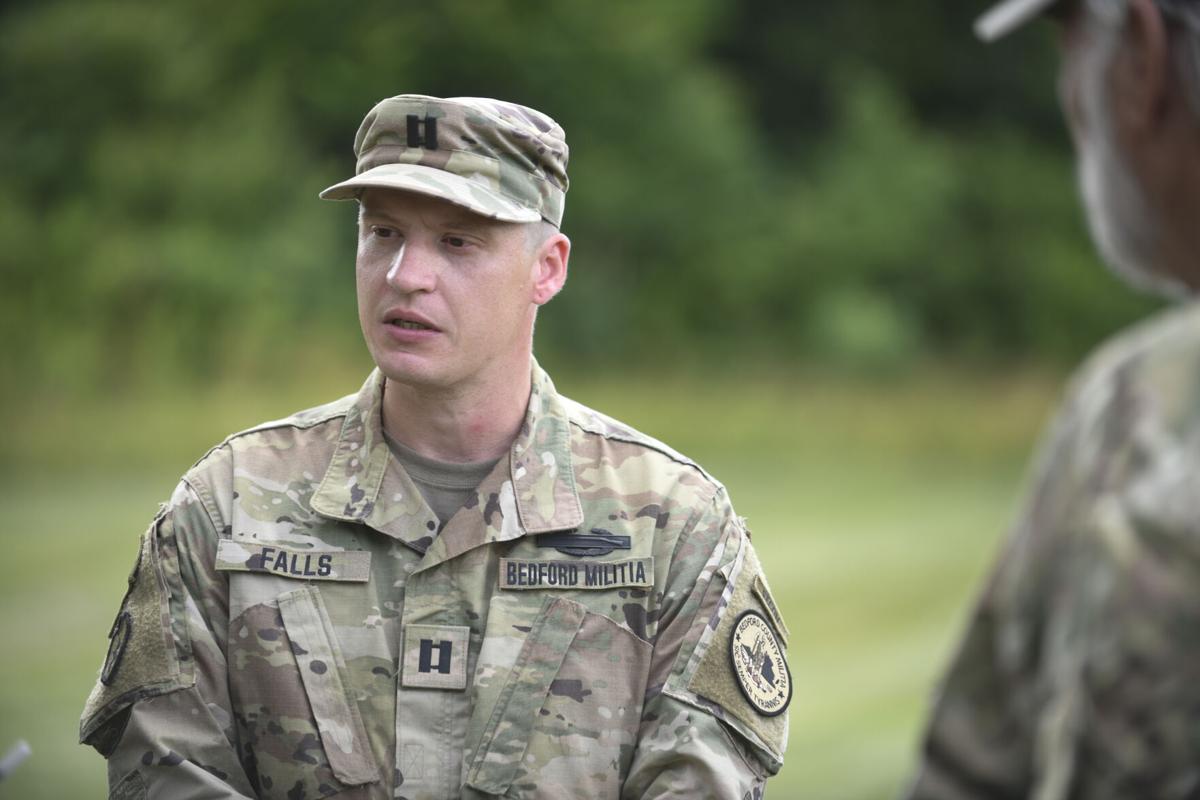 Cpt. Jonathan Falls, commander of the Bedford County Militia, talks during the group's muster on Saturday. 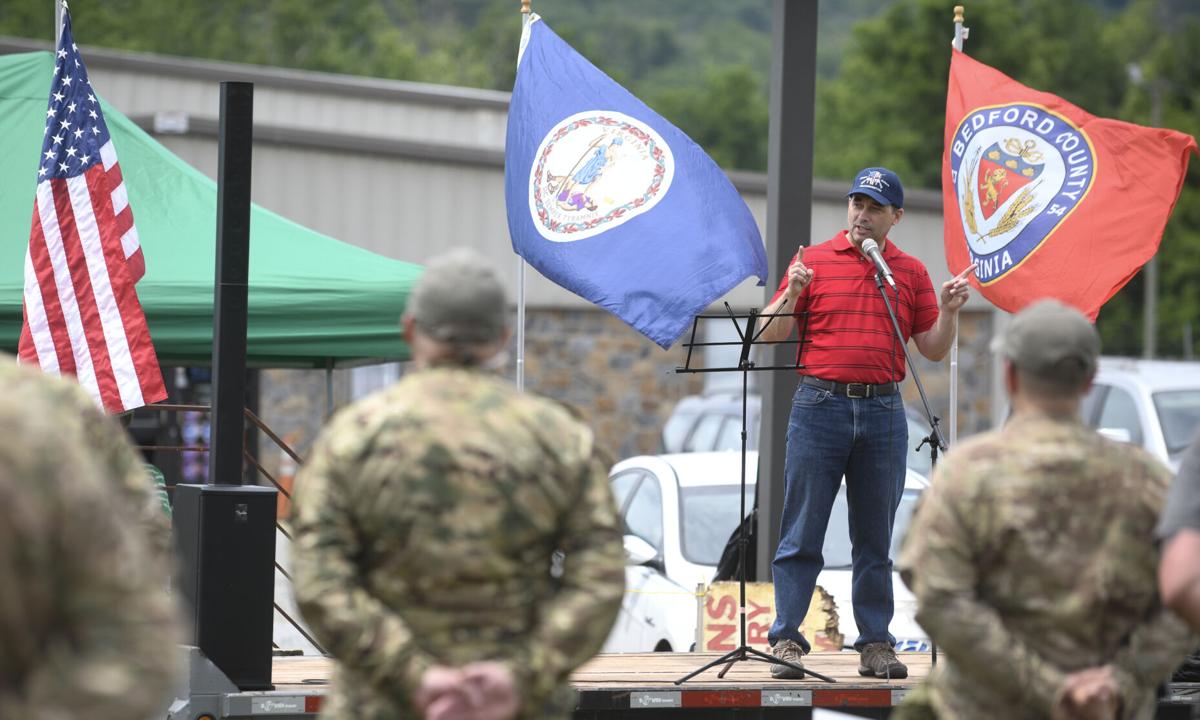 Rep. Bob Good, R-Campbell, speaks during the Bedford County Militia’s muster on Saturday. Good voiced his support of the group and their second amendment rights during his speech.

The Bedford County Militia was formed in February 2020 in response to proposed gun legislation, including a bill that would have banned the sale or transfer of assault weapons and the possession of certain capacity magazines.

In May, Attorney General Mark Herring called for federal resources to “combat the threat of militia extremism in Virginia and around the country.” In a letter to the House Subcommittee on Civil Rights and Civil Liberties, Herring touched on Virginia’s experience with such groups, mentioning the Unite the Right Rally in Charlottesville and the 2020 Gun Lobby Day in Richmond.

“And most frightening of all, some sheriffs and municipal governments are building relationships and even attempting to give official recognition or endorsement to unorganized, unaccountable, heavily-armed, self-styled militias that answer to absolutely no one,” Herring wrote.

Jonathan Falls, commander of the Bedford County Militia, said over the last year members have been working to build the organization and change the way people think about militias. The group was incorporated earlier this year as a non-stock, nonprofit corporation.

Falls said members of the Bedford County Militia are not extremists, nor are they “itching for a fight.” Rather, he described the militia as a group of “concerned citizens” who band together to support the community in times of crisis. He said the organization has helped to clear debris from roads after storms and in a river search and rescue operation in the spring.

“We’re not here to threaten, we’re not here to intimidate. You don’t see us marching up and down the roads and yelling crazy slogans,” Falls said. “After today we’re going to disappear again. You’re not really going to see much of us unless there’s a need for us.”

The militia borrows its structure from the Army, Falls said, noting that many of the leaders, including himself, have a military background. Members in attendance Saturday wore uniforms and called one another “captain” and “sergeant.”

In a flyer for Saturday’s event, volunteers were asked to bring an unloaded AR-15. It notes that semi-automatic rifles are considered to be “most suitable for service” in the militia.

Falls said the militia aims to operate responsibly, and its members go through training. Falls estimated the Bedford County Militia has between 60 and 80 members.

“Go to church, go to Walmart, go to the mall, go to the movie theater, go anywhere in public and that’s who we’re made up of,” he said. “We are the public.”

Rep. Bob Good, R-Campbell, spoke at the event, saying he was happy to be there with “proud patriots and constitutional conservatives who are doing their part to help strengthen our nation and to fight for the things that we believe in.”

Good said he is an advocate for the Second Amendment and has sponsored legislation to protect what he described as a “God-given right.”

John Sharp, a member of the board of supervisors, said Bedford County was one of only two localities in the commonwealth to formally recognize its militia. Sharp said he supported doing so because he felt it might give members of the militia “additional legal standing” to challenge gun control measures that were being considered by state lawmakers.

“You in your service as a member of the militia might need a higher capacity magazine or an AR-15 style weapon,” he said. “These are the types of things that they don’t want people to have. You all understand the importance of why we need it. And it’s not for hunting.”

Sharp read the resolution, which was adopted by the board of supervisors last year, in full.

Two additional members of the board of supervisors, Bob Davis and Mickey Johnson, also addressed the group, along with Del. Kathy Byron, R-Bedford.

Photos: From the Bedford County Militia muster in Montvale

Members of the Bedford County Militia stand in formation as the self-styled company gathered for a muster and membership drive in Montvale on Saturday.

Cpt. Jonathan Falls, commander of the Bedford County Militia, talks during the group's muster on Saturday.

Rep. Bob Good, R-Campbell, speaks during the Bedford County Militia’s muster on Saturday. Good voiced his support of the group and their second amendment rights during his speech.