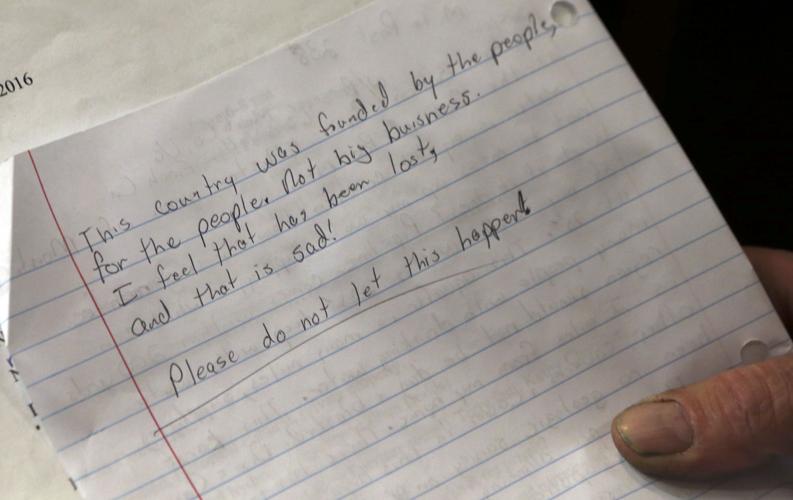 Cletus Bohon of Montgomery County holds his statement he  read to the Federal Energy Regulatory Commission about the proposed Mountain Valley Pipeline in 2017. 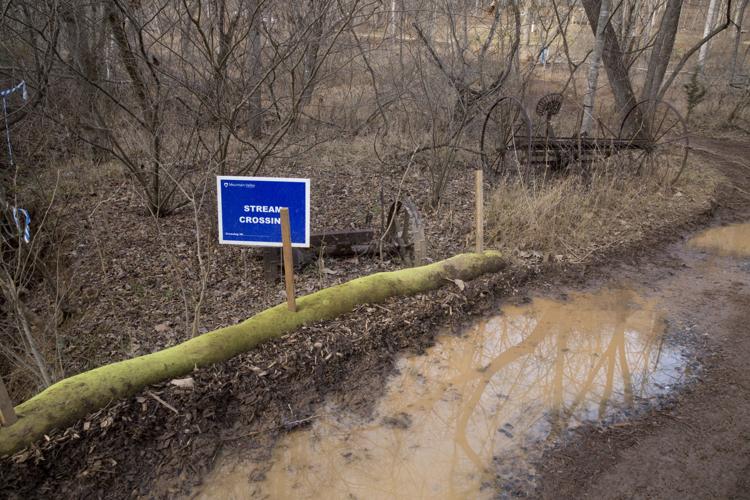 A federal appeals court has turned back the latest of many attempts by Southwest Virginia landowners to keep a natural gas pipeline off their property.

Cletus and Beverly Bohon of Montgomery County had challenged Mountain Valley Pipeline’s use of eminent domain to take their land after they refused the company’s offer to purchase an easement it needed for the buried pipeline.

The Bohons and four other landowners argued that Congress improperly allowed the Federal Energy Regulatory Commission to give eminent domain powers to private ventures once their projects were approved, which the commission did for Mountain Valley in 2017.

But in an opinion Tuesday, the U.S. Circuit Court of Appeals for the District of Columbia ruled that a district court in Washington D.C. lacked jurisdiction to hear the case, upholding the judge’s dismissal of the lawsuit.

The Natural Gas Act requires lawsuits such as the Bohon’s to be filed in a federal appellate court, a three-judge panel of the Court of Appeals ruled. That has happened in a similar challenge brought by other landowners, which was denied in 2019.

“Landowners respect but disagree with the Court’s decision,” their attorney, Mia Yugo, said in a statement.

“As we have seen on the world stage in recent months, natural gas is an important resource for promoting economic stability and national security,” Yugo said. “However, those concerns do not diminish the protections guaranteed in the U.S. Constitution, including the separation of powers doctrine which restricts unchecked government power.”

Although Mountain Valley has seen its government permits for the 303-mile pipeline struck down repeatedly by the courts, it has fared better in the many legal battles over its power to take private land.

When U.S. District Judge James Boasberg dismissed the Bohon’s case in May 2020, he called it “the latest trickle in a veritable flood of litigation” against Mountain Valley. In seeking the dismissal, lawyers for the company said the landowner’s arguments were “simply a rehashing of the same flawed theories” that have been rejected in the past.

Eminent domain in most cases allows governmental bodies to take private land for a public good, such as a highway or power line, provided the aggrieved owner receives just compensation.

Shortly after FERC approved Mountain Valley — finding a public need for the natural gas that would be transported through the interstate pipeline — the company filed suit against about 300 property owners in Southwest Virginia who had refused to sell easements for the project to pass through their rural land.

A federal judge granted Mountain Valley immediate possession of the parcels in early 2018, and construction began shortly afterward. But logging on the Bohon property off Yellow Finch Lane did not occur until March 2021, after a longstanding tree-sit protest was broken up by police when Mountain Valley obtained an injunction in civil court.

Multiple lawsuits by environmental groups and local opponents who cite the pipeline’s harmful footprint on natural resources have delayed its completion, and the company is currently seeking new permits that were struck down earlier this year.

Meanwhile, the question of how much money landowners should receive is being resolved on a case-by-case basis.

Most of the disputes have been settled, either through voluntary agreements or after a judge’s ruling on evidentiary issues forced a resolution. In two cases, juries awarded large amounts — $523,327 and $430,000 — to the owners of Bent Mountain tracts in Roanoke County.

Mountain Valley recently filed a motion in Roanoke’s federal court that seeks to set aside the $523,327 verdict, arguing that it was based on improper evidence about the value of land owned by the Terry family. U.S. District Judge Elizabeth Dillon has yet to rule in the case.

Work on the Mountain Valley Pipeline might be stalled for the winter, but that has not stopped the legal challenges against the embattled project.

Legal action has failed, once again, to undo the taking of private land for a natural gas pipeline through Southwest Virginia.

Cletus Bohon of Montgomery County holds his statement he  read to the Federal Energy Regulatory Commission about the proposed Mountain Valley Pipeline in 2017.