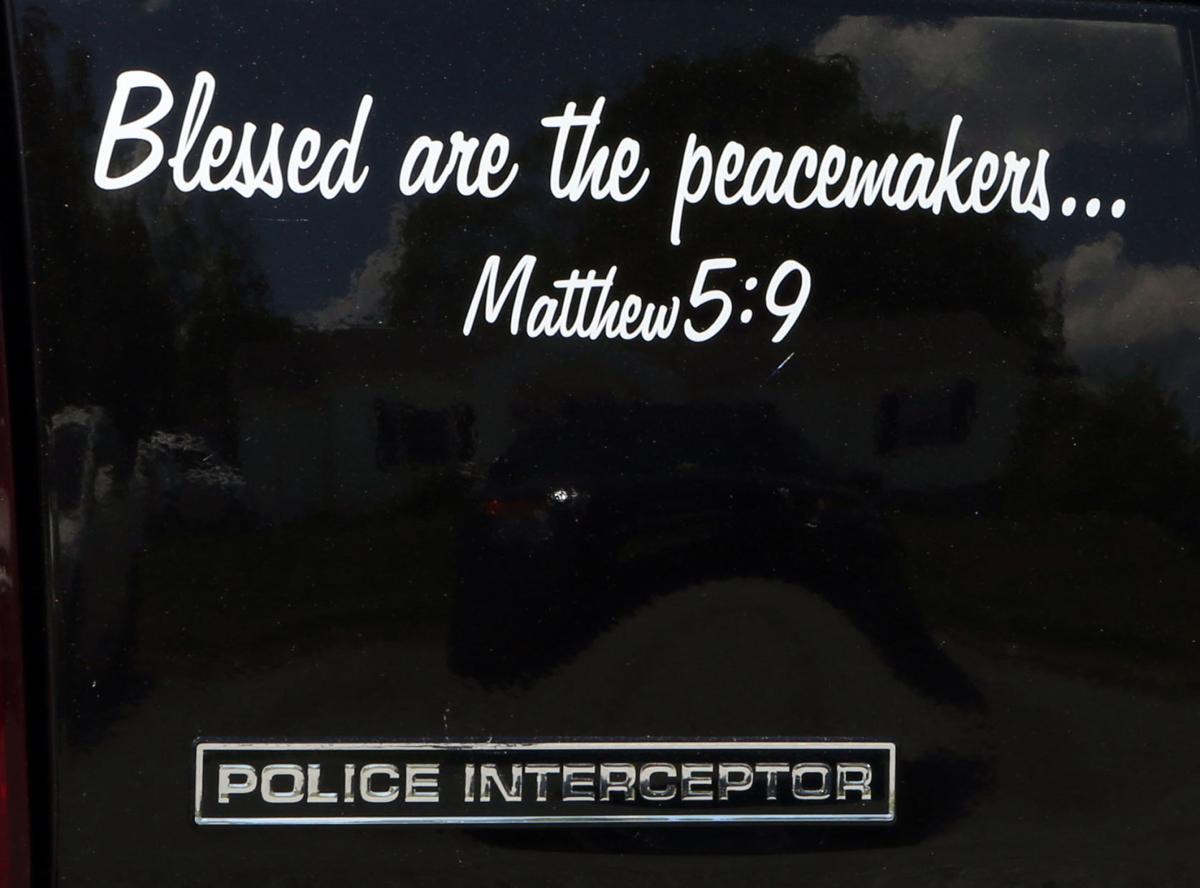 Some of the vehicles in the Montgomery County Sheriff's Office motor fleet have a Bible verse decal on their backs. 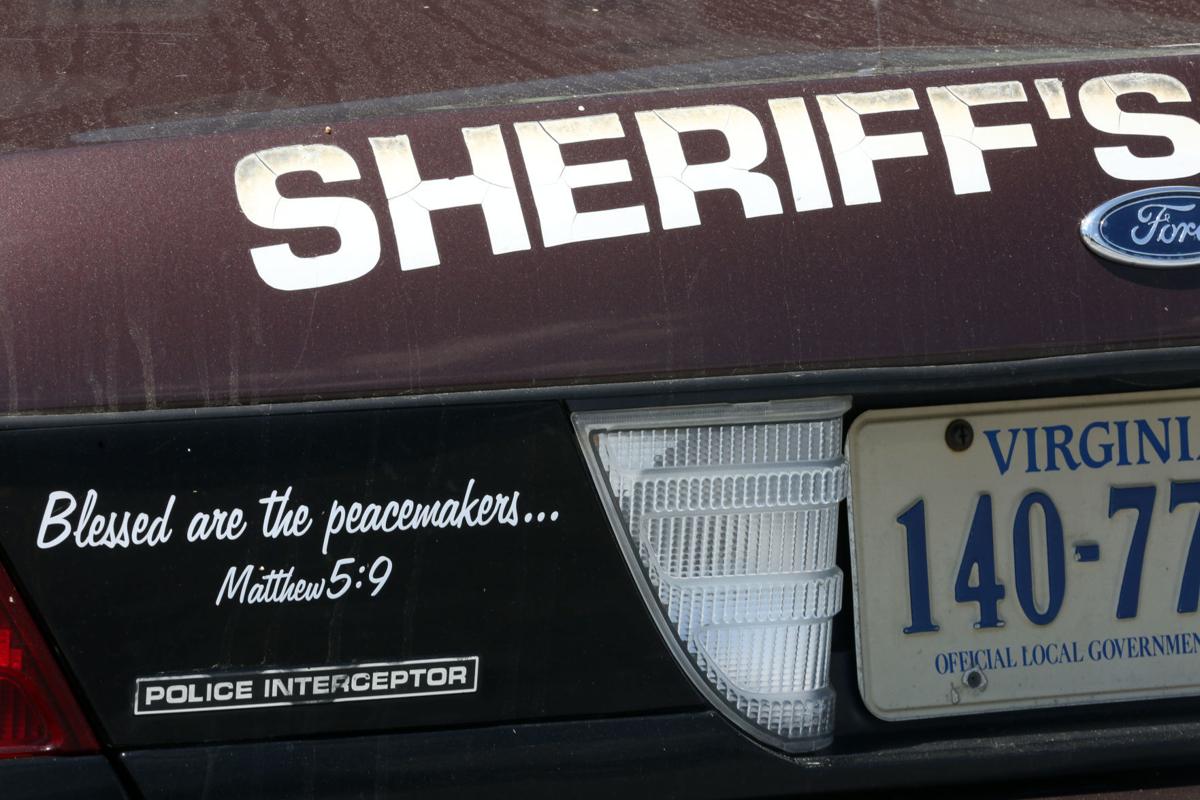 Last year, some Montgomery County sheriff’s vehicles had “Blessed are the peacemakers... Matthew 5:9” decals since March. The ACLU, among other groups, protested and the decals were removed.

Announcement of the decals’ removal came after county officials began asking about them and as the Freedom From Religion Foundation and the Virginia branch of the American Civil Liberties Union called the markings an unacceptable breach of the U.S. Constitution’s wall between church and state.

“A Bible verse … is a sectarian and exclusively religious statement,” said Sam Grover, staff attorney for the Madison, Wisconsin-based Freedom From Religion Foundation. “Under the Establishment Clause, the sheriff’s office, as a government entity, must remain neutral. It cannot promote one religion over another, or religion over non-religion.”

The Montgomery County decals on the back of patrol cars read “Blessed are the peacemakers... Matthew 5:9.”

The decals were put on vehicles in March and were donated by the company that designs graphics for the county Sheriff’s Office, Capt. Brian Wright, a spokesman for the sheriff’s office, wrote in an email Tuesday.

“We believe it’s a great way to honor our brothers and sisters in law enforcement during a time when many seek to tear them down,” Wright wrote.

The Tuesday email, sent in answer to questions from The Roanoke Times, did not mention an end date for the decals. Wright did not answer questions about whether the sheriff thought posting a Bible verse on government vehicles presented a church-state issue.

On Wednesday, after The Roanoke Times questioned other county officials and they said they were asking Sheriff Hank Partin about the decals, Wright wrote another email saying he had spoken to Partin and “Our current plans are to remove the decals at the end of 2017 Law Enforcement Memorial week.”

However, on Thursday, Partin released a statement that read, in part: "In the midst of National Police Week, we want to focus on those who have paid the ultimate sacrifice while serving their communities. The last thing that I want is for this to become a distraction to the men and women who serve their communities selflessly every day.”

The sheriff’s office decals came almost a year after county Board of Supervisors voted to post “In God We Trust,” the national motto, on the wall of its meeting room. The decision, made in a 4-3 vote, was defended both as a patriotic statement and — at least for residents who spoke at meetings in favor of the posting — as an endorsement of Christianity.

On Wednesday, the chairman of the Montgomery County supervisors said he was surprised to hear about the sheriff’s office decals. “The board is just learning of this situation,” Chris Tuck said. “I had not seen this on any vehicles.”

Tuck was the only supervisor to respond Wednesday to questions about the decals, and said he had consulted Partin and County Attorney Marty McMahon.

Emphasizing that he was speaking only for himself, not for the entire board, Tuck said that he thought Partin’s motives were good and that the sheriff had only wanted to memorialize fallen law enforcement officers. But Tuck said he saw a definite problem — and a definite difference between a biblical verse and his support last year for posting the national motto.

“I appreciate the sentiment and the meaning of that verse,” Tuck said of “Blessed are the peacemakers.”

“But there is a separation of church and state and I feel that putting biblical verses on public vehicles violates the First Amendment,” Tuck said.

He noted that supervisors had appropriated no money or otherwise approved the decals.

“This was a decision, something the sheriff and his staff did. The board was not consulted,” Tuck said.

The groups criticizing the county decals Wednesday are no strangers to the region’s religious-political wrangles.

In 2011 and 2012, the Freedom From Religion Foundation and the ACLU of Virginia were part of a legal battle that ended a display of the Ten Commandments at Narrows High School in Giles County. In 2012, the foundation urged Roanoke County supervisors to stop opening meetings with Christian prayers, eventually prompting a policy change. In more recent years, the foundation has involved itself in a Christiansburg Parks and Recreation Department decision to drop plans for a senior trip to the Ark Encounter and Creation Museum in Kentucky, and in Roanoke and Roanoke County schools’ decision to end the “watermelon ministry” that the Roanoke Area Fellowship of Christian Athletes offered to high school football players.

Grover said Wednesday that the Freedom From Religion Foundation will be contacting Montgomery County to express opposition to the peacemakers decal. He called those decals similar to situations that his organization has gone to court or otherwise involved itself in. In 2015, according to the news site AL.com, the sheriff in Houston County, Alabama, pulled decals that said “Blessed are the peacemakers” from vehicles after the foundation and another group protested. Last year, the sheriff of Brewster County, Texas, removed cross stickers from vehicles after a foundation lawsuit.

Foundation Co-President Annie Laurie Gaylor said Wednesday that the Montgomery County decals, like those in Texas or Alabama, were an inappropriate religious endorsement by a sheriff.”

“It’s like he’s saying, ‘We’re a Christian organization and if you’re not a Christian, you better watch out.’ … It sends a message that would make anyone who is not a Christian feel afraid,” Gaylor said.

Officials at the Virginia chapter of the ACLU voiced similar concerns, even as they cheered Partin’s decision to remove the decals.

“It’s a biblical phrase … it’s directly on a sheriff’s vehicle,” ACLU of Virginia Legal Director Leslie Mehta said. “So someone being stopped by a sheriff’s deputy may feel one way or the other, that you’re on my side because I’m a Christian or you’re not on my side. Either way, that presents a problem under the First Amendment.”

Charlie Schmidt, public policy counsel of the ACLU of Virginia, pointed to a letter that his organization sent to the Virginia Sheriff’s Association and other police and government groups in March, around the time that the Montgomery County Sheriff’s Office was putting the Bible decals on vehicles.

The letter warned of “a recent proliferation” of law enforcement agencies emblazoning “In God We Trust” on vehicles or putting religious phrases on official business cards.

“Because law-enforcement officials carry with them the threat of force at all times, they must be exceedingly cautious when it comes to matters of faith in order to avoid actual or perceived religious coercion,” the letter read. “ Law enforcement and government officials who wish to build trust between the public and their law enforcement agencies should be cautious about any religious display that constructs a barrier between their department and any people in their communities, including those who do not share the department leader’s faith or the majority faith in the department’s community.”

Some of the vehicles in the Montgomery County Sheriff's Office motor fleet have a Bible verse decal on their backs.

Last year, some Montgomery County sheriff’s vehicles had “Blessed are the peacemakers... Matthew 5:9” decals since March. The ACLU, among other groups, protested and the decals were removed.