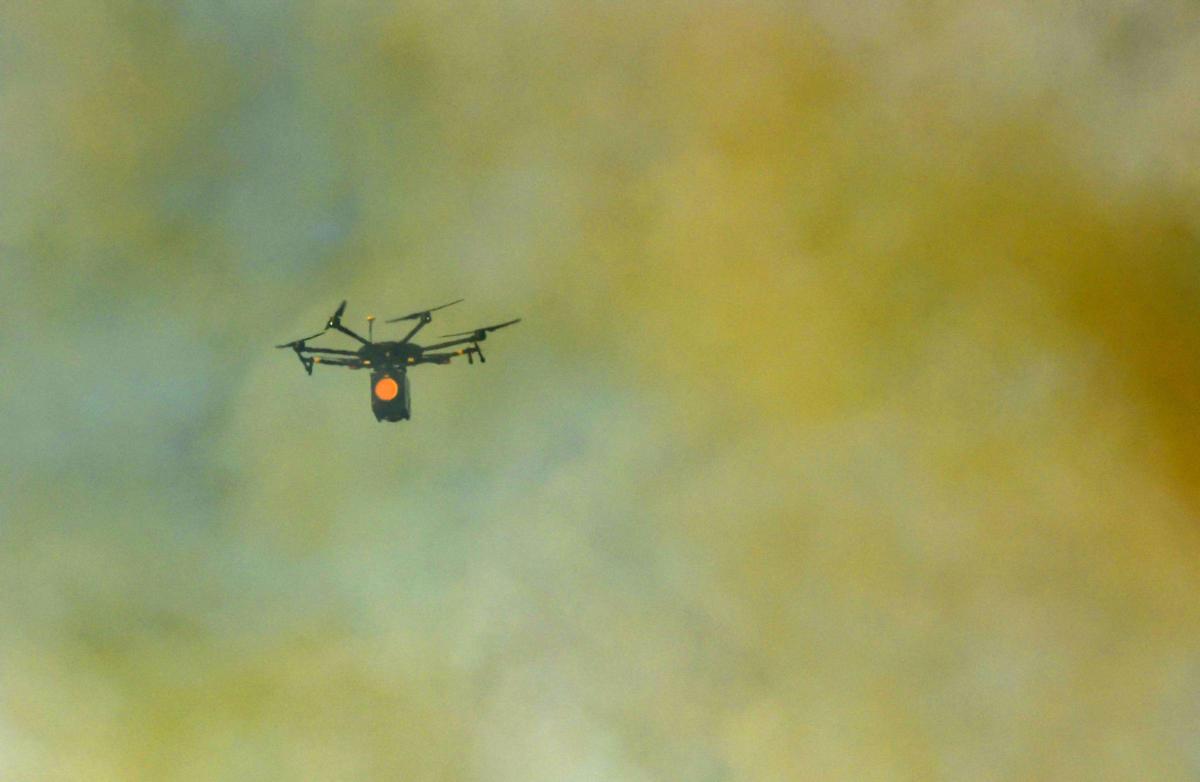 A NASA drone carried an array of sensors into the waste fire’s smoke plume. 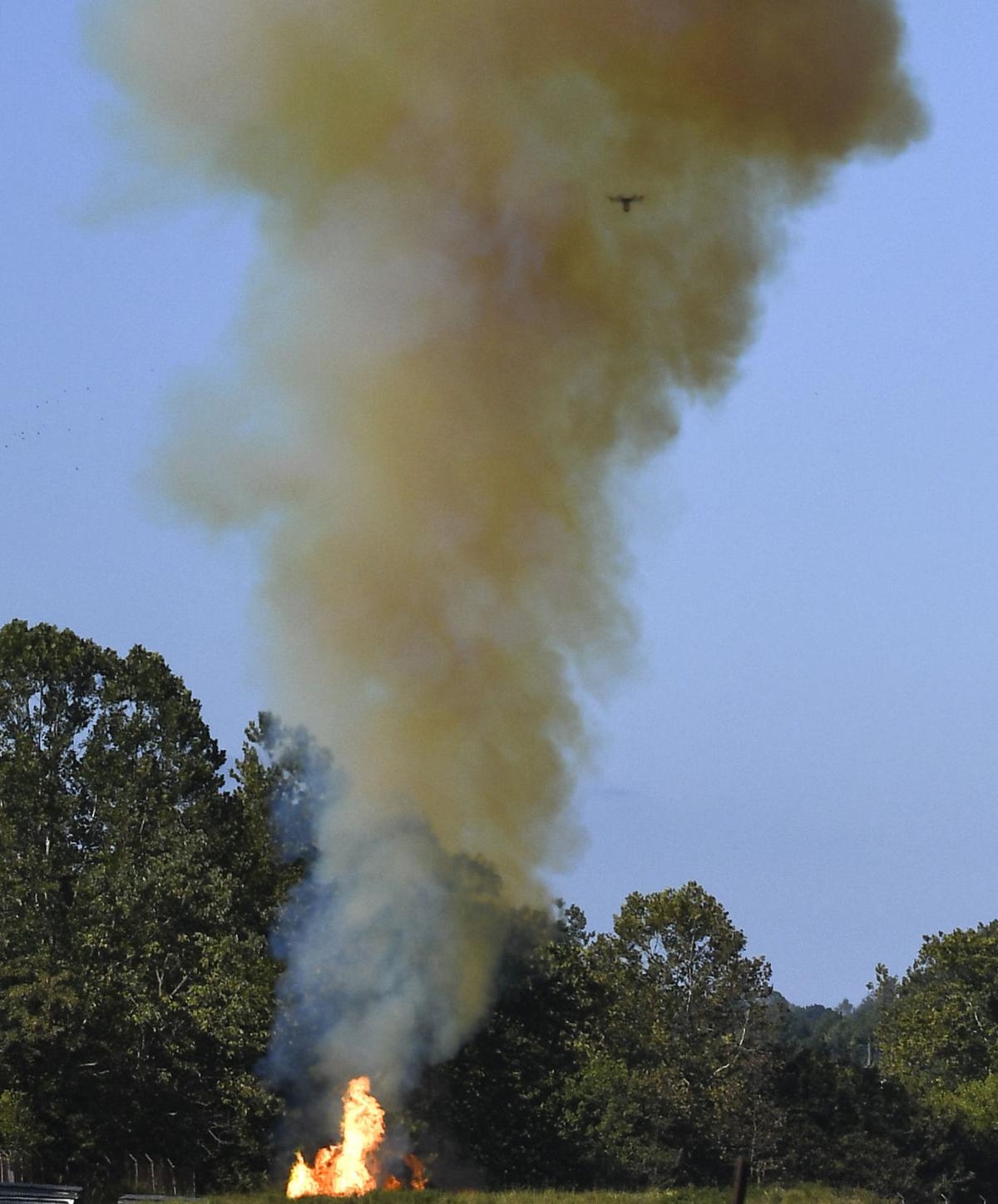 A NASA drone flies through a smoke plume above a burning pile of waste munitions on the grounds of the Radford Army Ammunition Plant Monday. 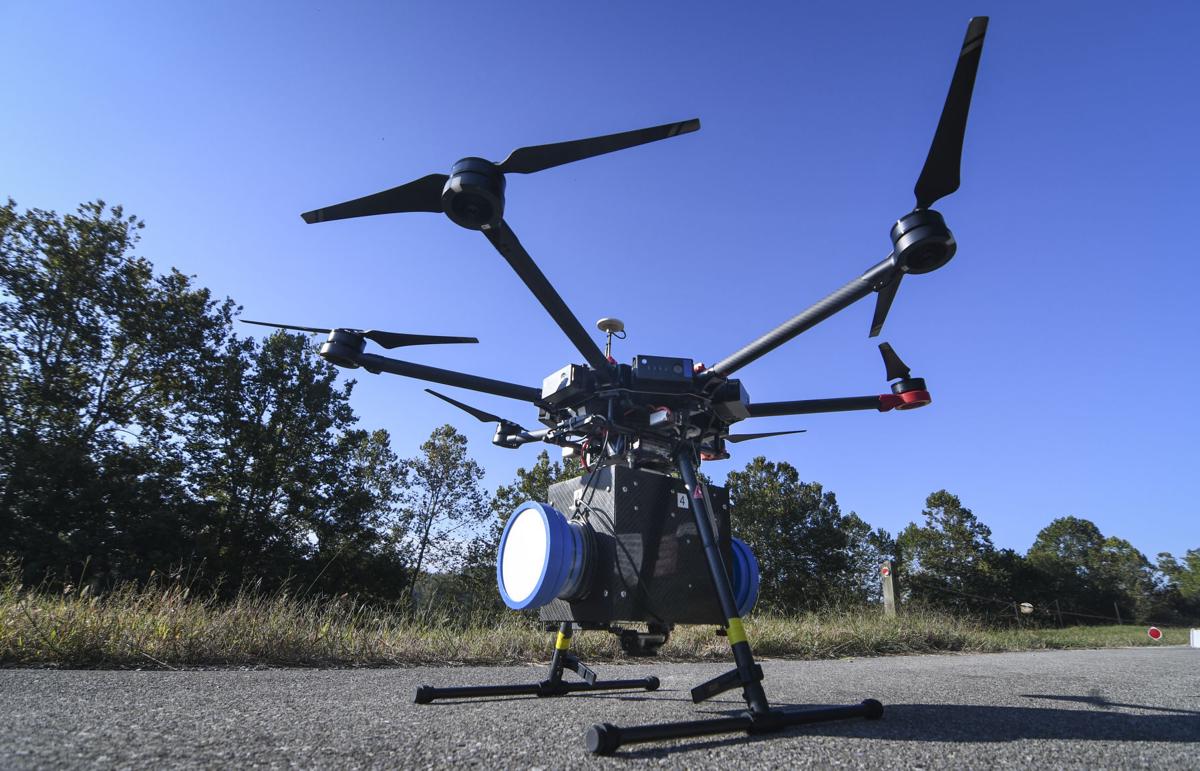 A drone was sent into the sky for smoke particle testing on the grounds of the Radford Army Ammunition Plant on Monday. 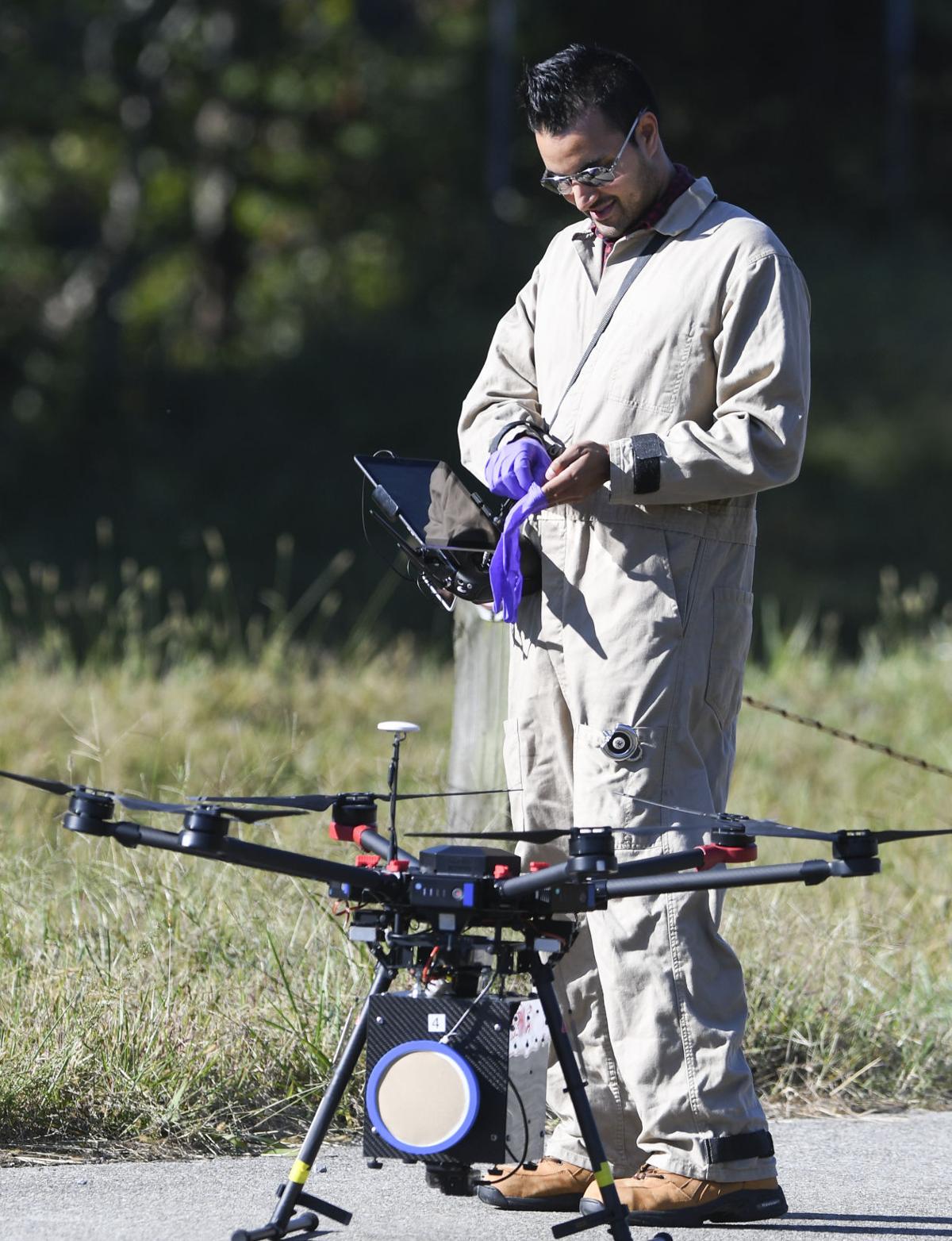 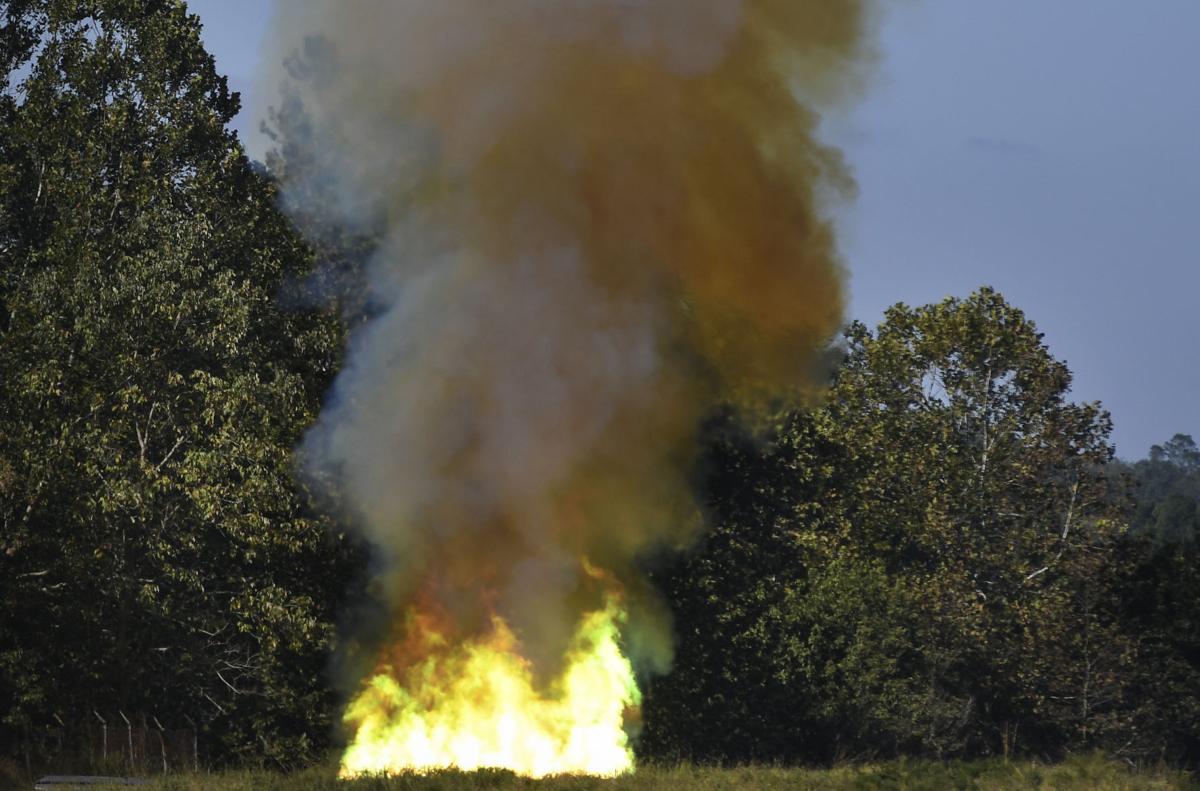 A pile of waste munitions burns Monday at the Radford Army Ammunition Plant. 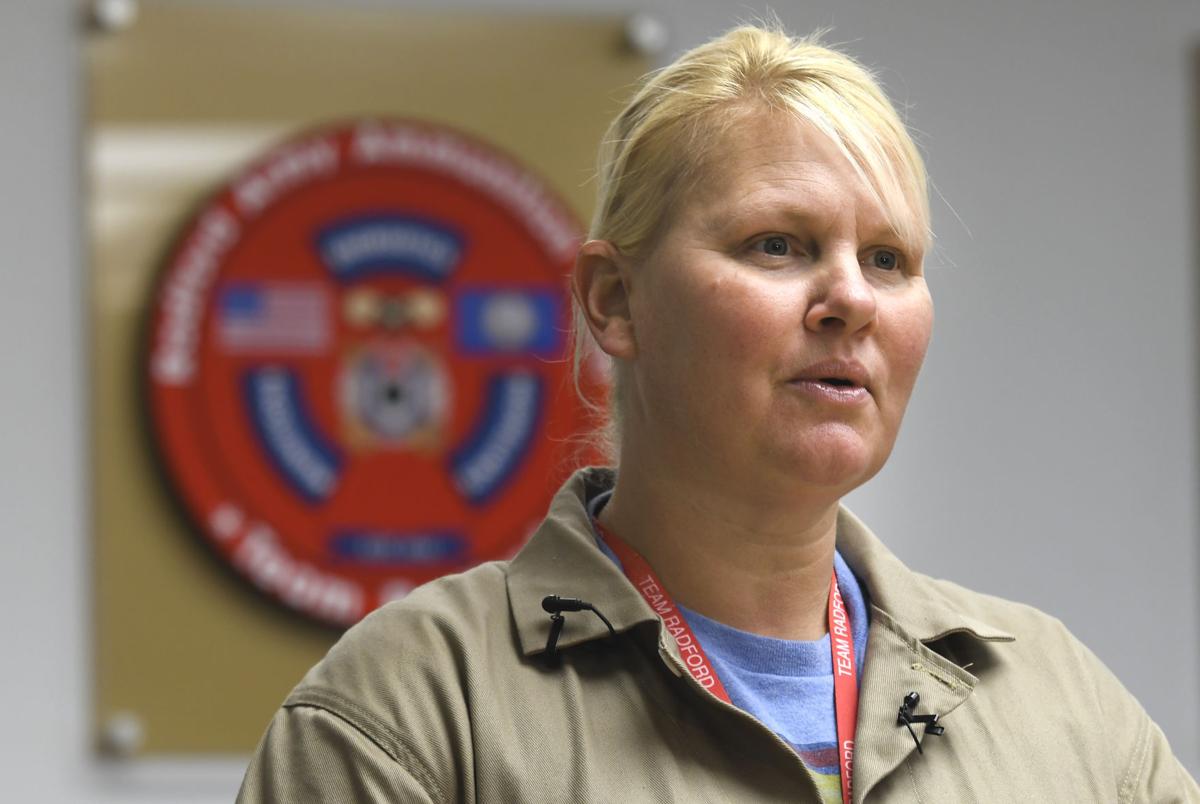 FAIRLAWN — The munitions waste popped and flared and shot multicolored flames skyward. As a plume of orange-brown smoke drifted skyward, a whirring, many-propellered drone rose with it, gathering air samples.

That was the scene Monday morning at the Radford Army Ammunition Plant, where long-sought monitoring of the explosive waste was beginning its second week.

“We know that we’re permitted and compliant,” said Lt. Col. Alicia Masson, commander of the U.S. Army-owned, contractor-operated facility. “But this will let us prove it.”

Masson said that the tests had already produced one surprise. Tests will show low levels of perchlorate, a chemical often linked to munitions-making, as well as to other manufacturing and to agriculture, Masson said.

The ammunition plant, known locally as the arsenal, covers 4,080 acres in Pulaski and Montgomery counties. It makes the propellant for ammunition and rockets used throughout the U.S. military.

Its practice of burning toxic waste in open-air fires in a bend of the New River has drawn protests from a vocal group of residents who fear it sends hazardous chemicals into nearby communities.

The arsenal regularly tops the annual federal Toxic Release Inventory for Virginia, but nearly all the pollutants produced by its operations are allowed under air and water quality permits.

The permits set limits that regulators say prevent dangerous levels of pollutants from reaching people outside the plant. But critics have pointed out that the permits are largely based on modeling — on calculations of the materials that are used and the chemical reactions that are anticipated — rather than on actual tests of emissions.

The ammunition plant burns much of its waste in closed incinerators where ash is contained and smoke passes through filters before being released.

But some waste is too large and too explosive for the grinding process that prepares material for the closed incinerators. That waste is disposed of at the Open Burning Ground, where it is set on fire in ceramic-lined steel pans.

A new, closed incinerator that can handle most of what now goes to the Open Burning Ground is being designed, plant officials have said, but that process still is in early phases.

Residents have asked the Virginia Department of Environmental Quality to mount air quality monitors at Montgomery County’s Belview Elementary School and other locations near the plant. On Monday, DEQ spokesman William Hayden said that he had no information about whether such monitoring might be coming.

Earlier this year, Masson announced that a coalition of researchers from the National Science and Aeronautics Administration, the University of Dayton and the U.S. Environmental Protection Agency would use a drone aircraft to gather air samples from within the plume released by open burns.

On Monday, several researchers and plant officials said that the drone-mounted array of electronic and physical sensors could become a model for other military and industrial facilities. The Army is supplying a budget of about $300,000 for the testing effort, Masson said.

Bill Hendon, the manager of safety, health and environment for ammunition plant operator BAE Systems, said that plant workers saved up various sorts of waste for the test period so that all materials produced at the arsenal would be burned while the drone was overhead.

“We want to test all waste streams, all scenarios,” Hendon said.

Greg Nelson, who lives near the arsenal and regularly speaks about environmental concerns at the plant’s information sessions and other public meetings, on Monday called the open burning “primitive technology” that should have been replaced years ago. He was skeptical that the drone tests would give the full picture of what goes on at the plant.

“I’m curious if they’re going to simulate when they mess up,” Nelson said.

Hendon said that after all the data is collected, more than 1,800 total tests would be performed, looking for more than 250 substances within the plume. Those results should be back by the end of the year, he said. Masson and plant officials promised to make the findings public.

Plant operations chief Rob Davie said that the report from the tests would detail a mix of particulates, metals, volatile and semivolatile chemicals produced by the burns.

Hendon said that he was confident that the tests would find nothing that the plant’s managers — and regulators — did not expect.

“I think it’s going to be very reassuring, both to us and to the community,” Hendon said.

When low levels of perchlorate were found in several Montgomery County and Virginia Tech water systems earlier this year, it fueled more outcry about the arsenal. Arsenal officials insisted that they did not burn perchlorate.

But last week, it was discovered that Pyrotechniques by Grucci, a fireworks-maker that is a tenant at the plant, had sent some perchlorate-containing whistles to be burned, Masson said.

For years, arsenal officials have said that perchlorate is never burned at the Open Burning Ground. Now they will have to say that it is rarely burned, she said.

“That’s frustrating,” Masson said about the gap between public statements and what actually occurred at the burns.

“There’s a gap of information right now and people fill it with fear,” Masson said. “We want to fill it with science.”

A NASA drone carried an array of sensors into the waste fire’s smoke plume.

A NASA drone flies through a smoke plume above a burning pile of waste munitions on the grounds of the Radford Army Ammunition Plant Monday.

A drone was sent into the sky for smoke particle testing on the grounds of the Radford Army Ammunition Plant on Monday.

A pile of waste munitions burns Monday at the Radford Army Ammunition Plant.