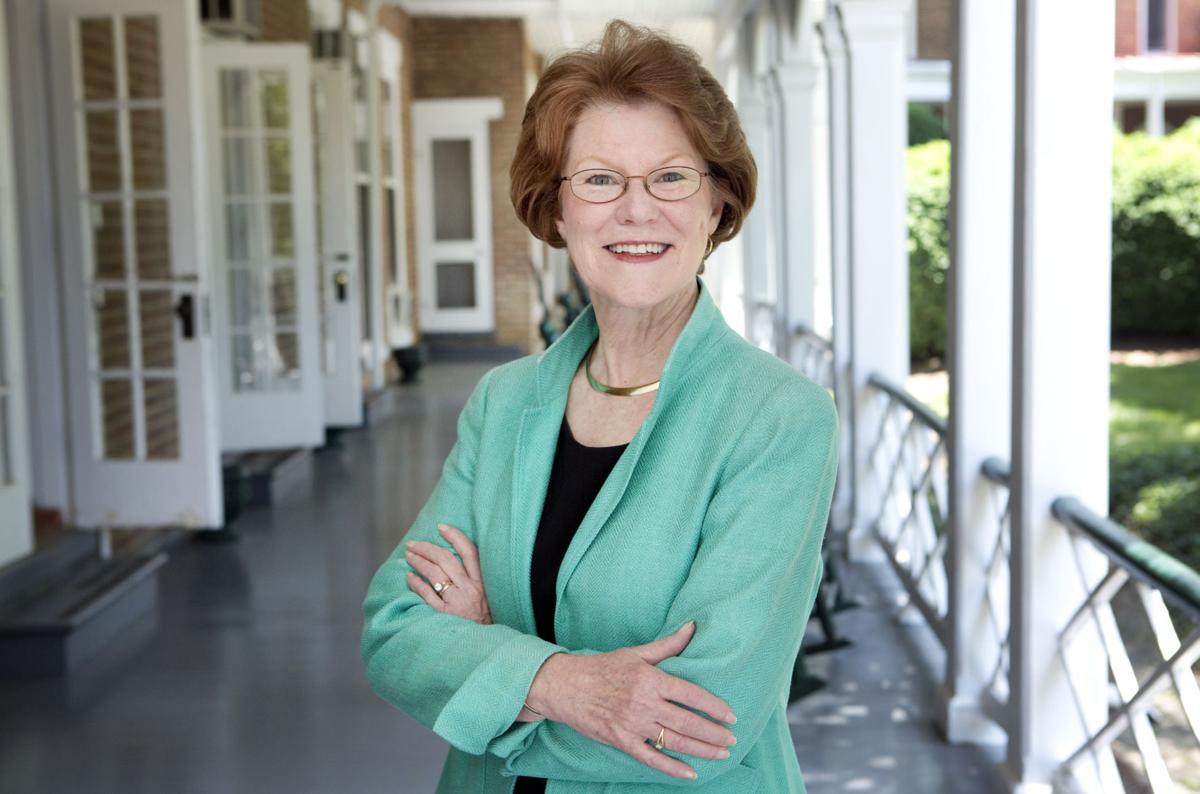 Nancy Gray retired June 30 after serving as president of Hollins University. She plans to continue living in the Roanoke area. 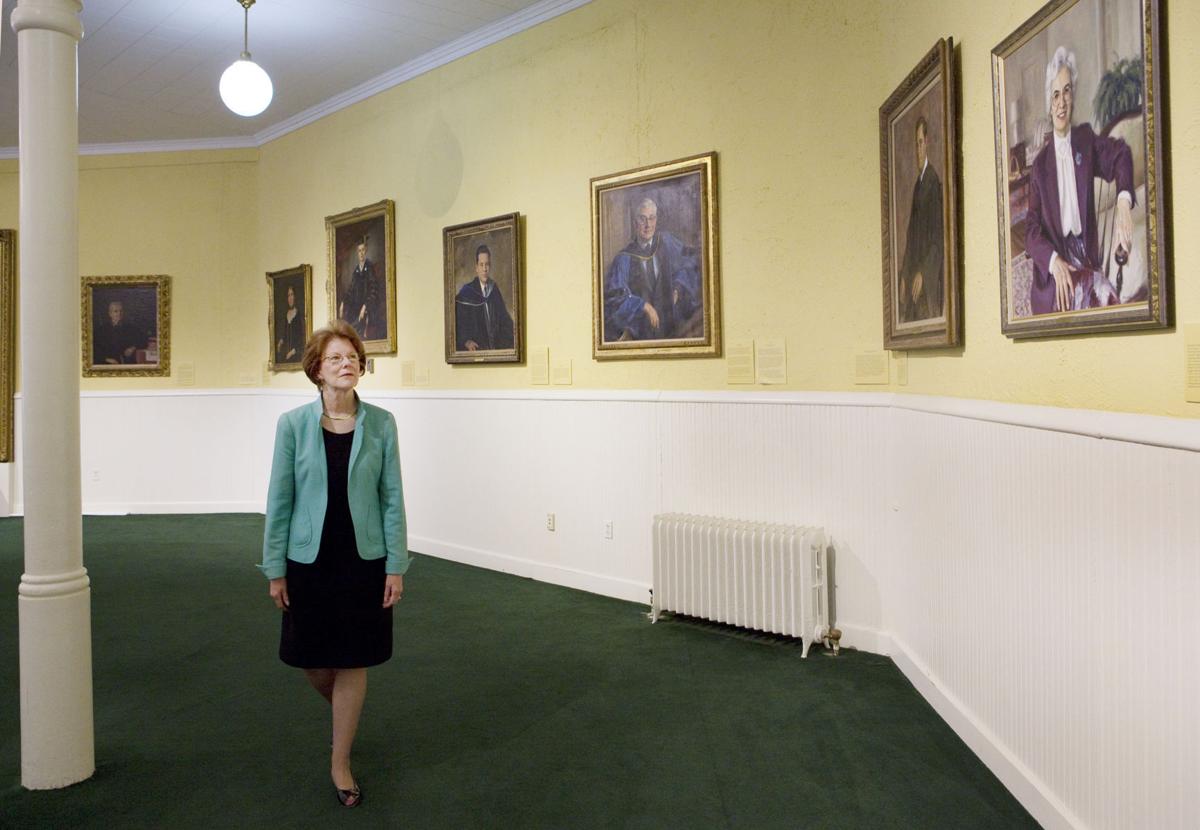 Nancy Gray looks at portraits of past presidents in Botetourt Hall on Thursday. Her portrait now hangs among them as the 11th president of Hollins University. She retired Friday. 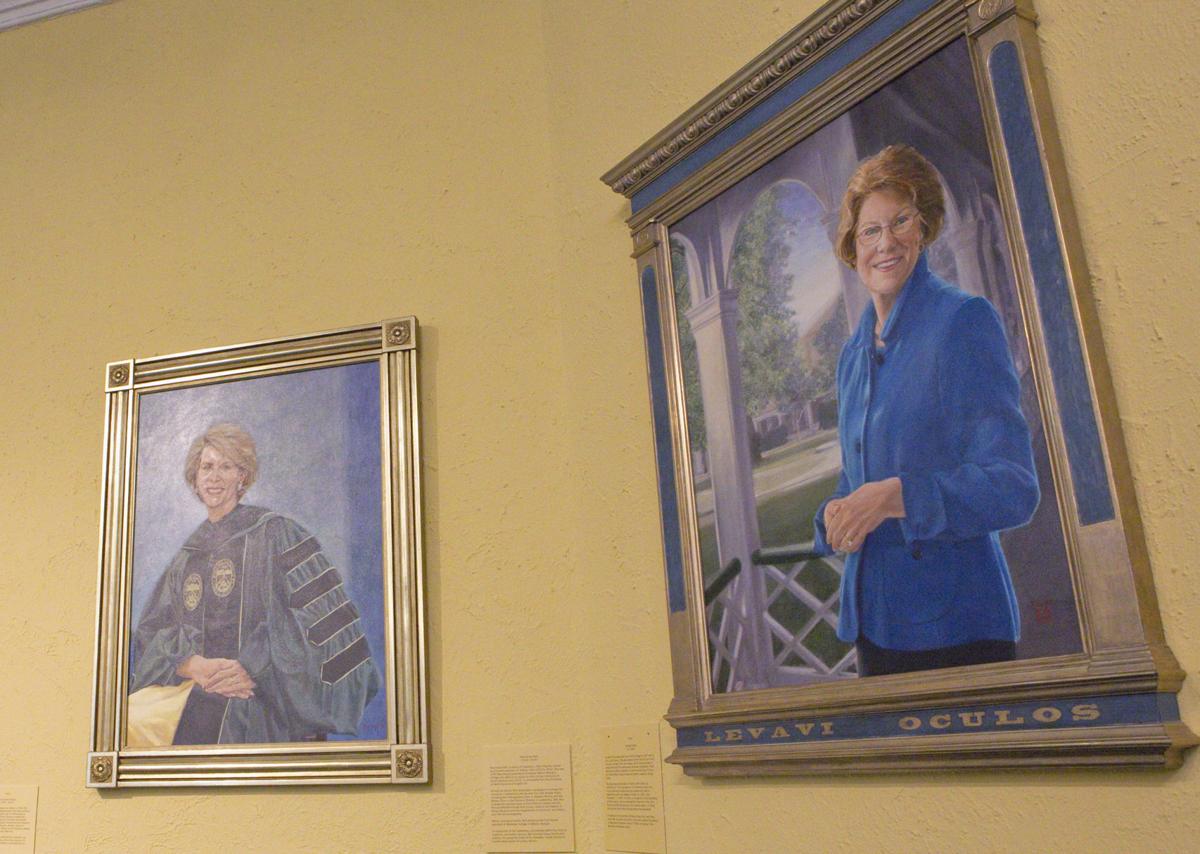 A portrait of Nancy Gray now hangs in Hollins University’s Botetourt Hall alongside portraits of other past presidents. To the left is Hollins’ 10th president, Nora Kizer Bell.

When Nancy Gray looked across Hollins University’s picturesque, green quad on commencement day, she saw over 200 graduates who, like her, had once arrived on campus as newcomers ready to plunge into the unknown.

Together, they had grown, learned and conquered obstacles, sharing in each other’s highs and lows. Together, they arrived at this moment, bonded by a shared history — part of a 175-year legacy of Hollins women.

“I felt truly overwhelmed with gratitude for the opportunity to have been here,” said Gray, 66. “It has been such a joy and a rare privilege to play a small part in shaping the lives of these students and of this first-rate institution.”

For Gray, a Texas native who joined Hollins as its 11th president in 2005, the past year has been peppered with last milestones: Last student orientation. Last Founder’s Day. Last commencement celebration.

Gray announced last summer that she would retire at the end of the 2016-17 school year. Her final day in office arrived Friday.

“This is so sad,” Hailey Hendrix, a Hollins alum who now works in its development office, said during one of Gray’s last staff meetings — a gathering marked by a mix of laughter, song and emotional farewells.

President Gray (or “P. Gray” as students affectionately call her) has been a steady source of support and inspiration, inviting students into her home or stopping to hear the latest about their projects and goals, Hendrix said.

“She’s just got this personality that attracts everyone to her,” said Hendrix, a member of the Class of 2016.

“She’s always so caring and interested. My friends who went to other schools would be super surprised that I knew the president of my university and that she knew my name. That’s not a normal college experience for a lot of people.”

Gray, who plans to continue living in the Roanoke Valley, first arrived on campus 12 years ago with a self-described mission to provide love and leadership for the Hollins community.

She paired a warm, caring-to-the-core personality with a keen business acumen that helped Hollins wipe out its debt and push its fundraising to record-breaking highs, said school leaders.

Hollins just set a new fundraising record for itself with over $20 million generated in the past year. Its endowment, which hovered just under $100 million in 2005, is soon projected to reach about $180 million.

Gray is someone who can command attention at both local meetings and national events, Maxey said.

“You know that wisdom comes from Nancy Gray,” he said. “She’s so credible and thoughtful and smart. People know that, when President Gray speaks, we should listen.”

Gray, in turn, pivots when asked about these milestones to shift the spotlight to the staffers, students and alumnae who have helped lead the charge to strengthen Hollins’ future.

“It has been this community that has done it,” she said. “I just feel full of love, of respect, of gratitude for all the wonderful people with whom I’ve worked. It has been one of the greatest gifts of my life.”

Gray said she sees a bullish future ahead for Hollins. While small liberal arts colleges and all-women’s colleges are facing new challenges, Hollins is well-positioned to serve those seeking high academic standards and a close-knit community in an environment tailored to empower women.

“At Hollins, we are very clear about our mission,” Gray said. “We’re focused on opportunities for women in an environment where women are encouraged to lead, to be bold, to push the envelope, and as they do so they become increasingly sure of who they are and increasingly confident in their abilities.”

“That is something we offer that not many other schools do,” she said. “We believe so strongly that we are changing women’s lives here.”

Hollins, which was Virginia’s first chartered women’s college and now one of only three remaining, has had success in combating the headwinds buffeting many of the nation’s small private colleges.

In addition to being financially stable, it welcomed its largest freshman class in over 15 years last fall.

It’s committed to expanding and evolving its programs by investing more in real-world learning opportunities, such as internships and study abroad, and designing new degrees in majors such as environmental science — the latter being part of a larger environmental focus that’s included slashing the campus’s carbon footprint.

Fueled by support from donors, it’s also been able to forge ahead with campus refurbishments, most recently launching a renovation of its science building.

Through it all, Gray has led the campus with a steady, empathetic hand, said Hollins board chairwoman Judy Lambeth.

“I think she’s maybe one of the most brilliant leaders I’ve seen,” said Lambeth, a member of the Class of 1973.

“She’s able, because of her authenticity and sincerity, she’s able to bring people together around ideas on even difficult subjects and get them to row in the same boat,” she said, later referencing in part the school’s work to tackle dialogues about sensitive issues such as race. “People trust her so they’re willing to throw in with her and see what can be accomplished.”

The board of trustees recently surprised Gray by announcing it had raised $2.3 million to start a new scholarship in her name. It also presented her with an honorary degree that seemed a fitting tribute for her service to the Hollins tradition.

“I think the stamp of a Hollins woman is that she leaves wherever she is a better place,” said Lambeth. “I’m so proud of what Nancy has contributed to that.”

For Gray, these last days have been a flurry of final preparations and farewells. They’ve also been marked by a continued focus on the future as the school presses forward with new projects and prepares to welcome its next president, Pareena Lawrence, who takes office this week.

As she walked across the quad talking about the school’s future, Gray was greeted with an exuberant exclamation of “P. Graaay!” from student Susie Young.

Young cheerfully told Gray that she and the other theater students were plotting to change the world. Gray laughed and hugged her.

Nancy Gray retired June 30 after serving as president of Hollins University. She plans to continue living in the Roanoke area.

Nancy Gray looks at portraits of past presidents in Botetourt Hall on Thursday. Her portrait now hangs among them as the 11th president of Hollins University. She retired Friday.

A portrait of Nancy Gray now hangs in Hollins University’s Botetourt Hall alongside portraits of other past presidents. To the left is Hollins’ 10th president, Nora Kizer Bell.