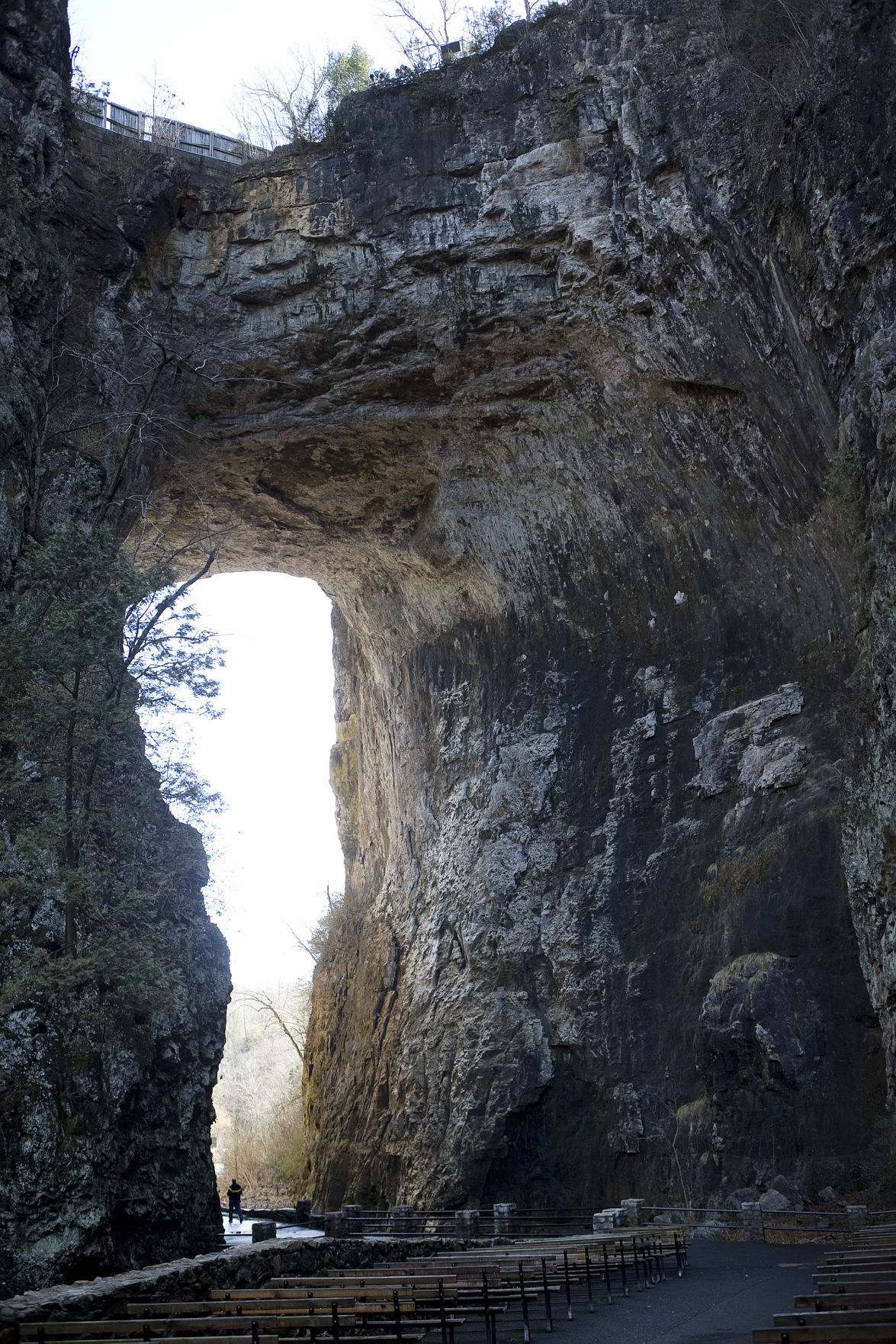 Under an agreement approved Tuesday, The Trust for Public Lands will take temporary ownership of Natural Bridge State Park until the loan is paid off in 2024, at which point it will be deeded to the Virginia Department of Conservation and Recreation.

The Virginia Department of Conservation and Recreation has been managing Natural Bridge as a state park since 2016.

The Natural Bridge State Park will soon have a new owner, a conservation nonprofit that state officials say will give more financial stability to a local landmark older than the United States.

At a meeting Tuesday, the board of the Virginia Resources Authority voted to restructure a loan used to purchase the Rockbridge County property, which will allow its ownership to transfer to The Trust for Public Land.

A different nonprofit — headed by Tom Clarke, a Roanoke health care executive — secured the $9.1 million loan from the authority in 2014. Clarke’s Virginia Conservation Legacy Fund purchased the 215-foot tall stone formation and surrounding 1,500 acres, saving it from being sold at a public auction.

Clarke pledged to donate the land for a state park once the loan was paid off, but quickly ran into financial problems.

The Trust for Public Land “is the right partner for ultimately getting the property under the Commonwealth’s ownership,” Shawn Crumlish, director of financial services for the authority, told its board Tuesday.

Ownership by the land trust is expected to create greater opportunities for grants and funding for Natural Bridge, according to the resource authority.

Headquartered in San Francisco, the trust works with communities to protect lands and waterways. With a staff of 350, it has acquired and protected about 3.8 million acres valued at nearly $9 billion nationwide.

Under the agreement approved Tuesday, the trust will take temporary ownership of the state park until the loan is paid off in 2024, at which point it will be deeded to the Virginia Department of Conservation and Recreation.

DCR has been managing Natural Bridge as a state park since 2016, using revenues from admission fees and visitor center sales to pay off the loan while the Virginia Conservation Legacy Fund remained its legal owner.

Visitors to the attraction will see no difference in its day-to-day operations, Crumlish said.

But behind the scenes, the park found itself facing new financial strife last year, when the annual loan payment jumped from $325,000 to $579,000. The increase was part of an earlier deal with Clarke in which the payments were lowered for three years to give the park time to make a financial recovery.

Clarke’s group agreed in 2016 to build up a reserve fund of $500,000, in case extra money was needed if the park’s revenues did not cover the higher loan payment. But the reserve fund never materialized.

Rather than continue down that path, DCR and the resource authority began to search for a new owner. Before the deal becomes final, the land trust’s board must also approve it.

A representative of the trust could not be reached for comment Tuesday.

Efforts to reach Clarke were unsuccessful Tuesday. In previous correspondence with the authority, he did not object to his conservation fund relinquishing ownership.

The Natural Bridge Historic Hotel and Conference Center, which is adjacent to the stone formation but not part of the state park, was sold by Clarke last year and is now a Trademark Collection by Wyndham brand.

While the park and hotel are separate entities, they enjoy a reciprocal relationship in drawing visitors from nearby Interstate 81. About 180,000 people visit the state park each year, the authority was told.

Natural Bridge has had many owners over the years and once was more of a roadside attraction that offered a mini-golf course, a wax museum and a haunted house next to a natural formation that has been called one of the Seven Natural Wonders of the World.

When the property went up for sale in 2013, supporters worried that it would be carved up for condominiums and commercial development. While Clarke’s purchase of the land relieved those fears, concerns were raised anew after his group struggled to make loan payments.

Once ownership converts to the state, it will be the latest transaction of Natural Bridge since 1774, when Thomas Jefferson paid 20 shillings to acquire it from the King of England.

The annual payment on a $9.1 million loan used to purchase the property will nearly double this year.

The $579,000 annual installment was made without the assistance of a conservation nonprofit that purchased the property in 2014.

Under an agreement approved Tuesday, The Trust for Public Lands will take temporary ownership of Natural Bridge State Park until the loan is paid off in 2024, at which point it will be deeded to the Virginia Department of Conservation and Recreation.

The Virginia Department of Conservation and Recreation has been managing Natural Bridge as a state park since 2016.