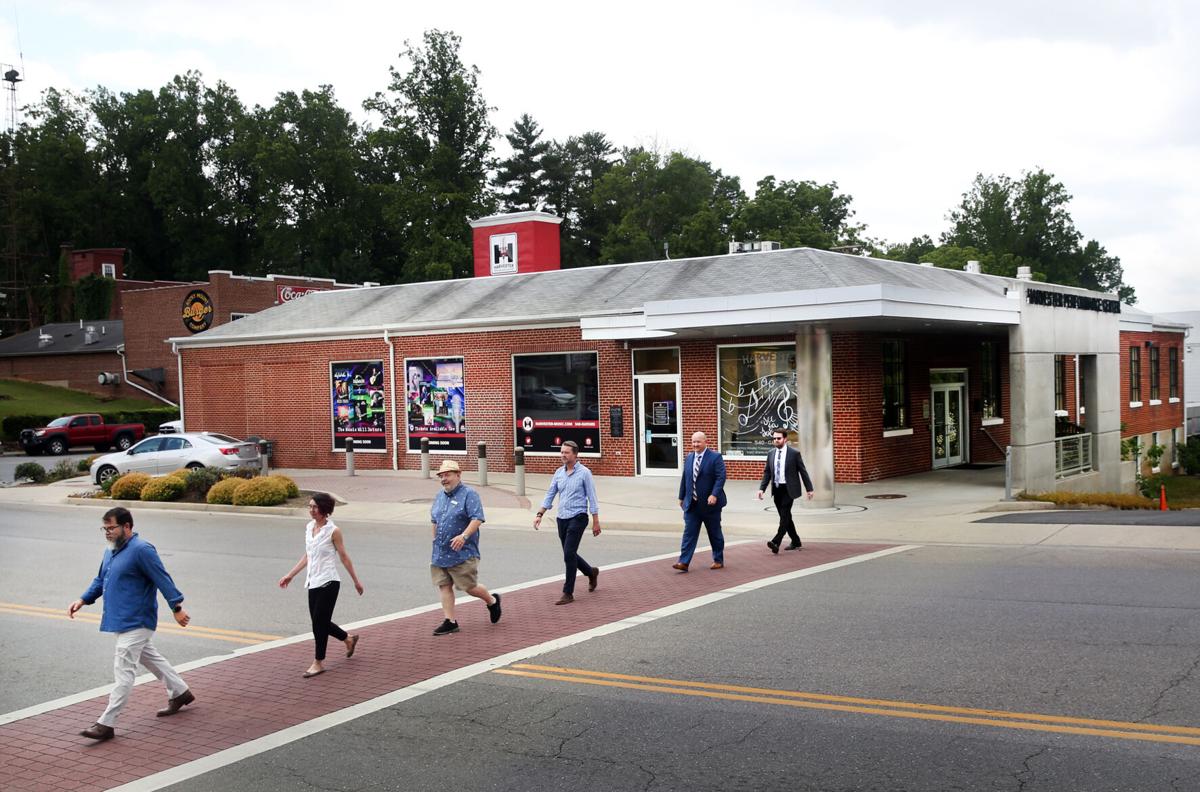 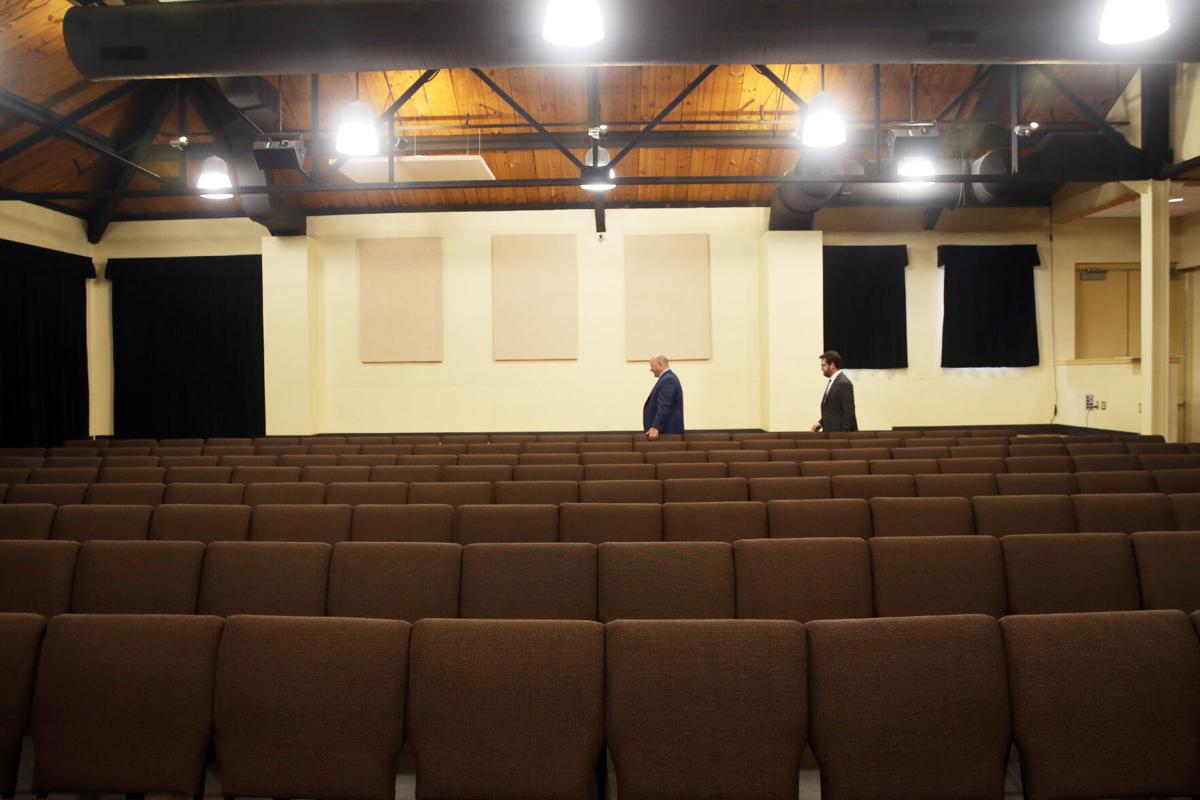 Reserved seating will be allowed for newly booked shows scheduled at the Harvester Performance Center. Mark Moore, assistant town manager, left, and Robert Wood, town manager, are pictured walking behind the theatre where some remodeling will occur. 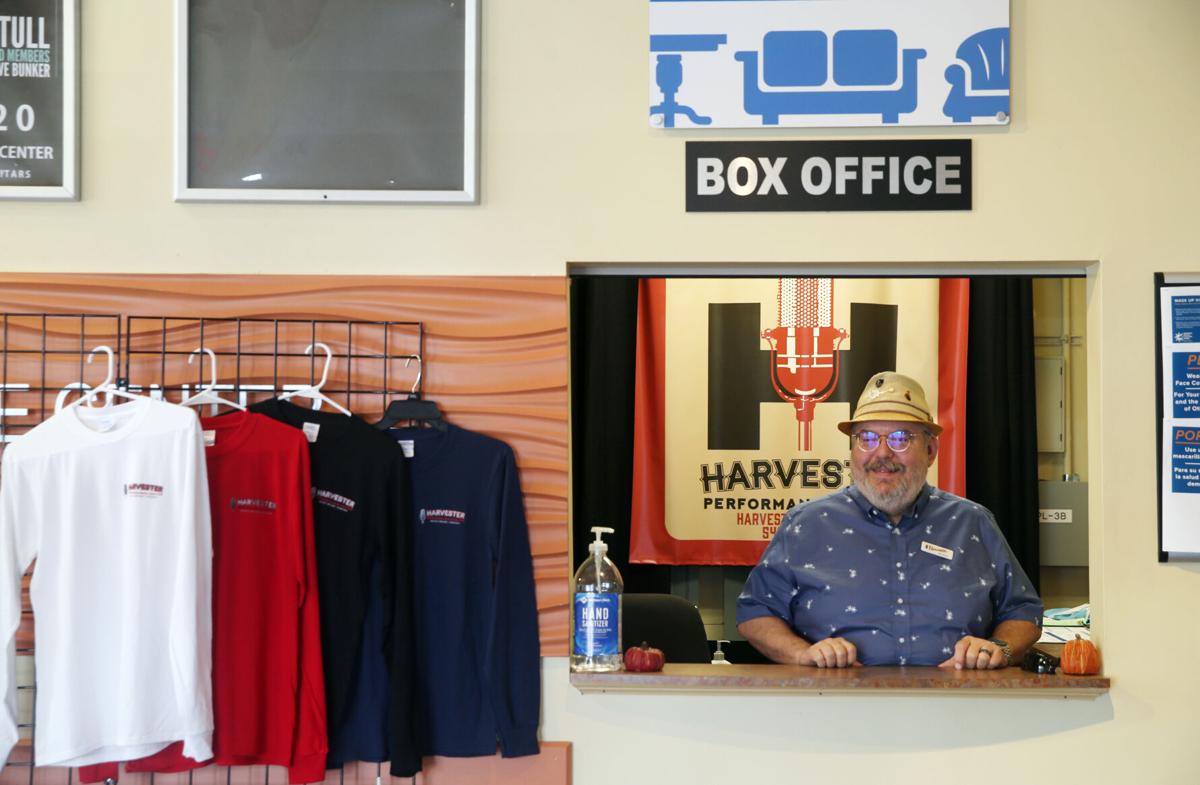 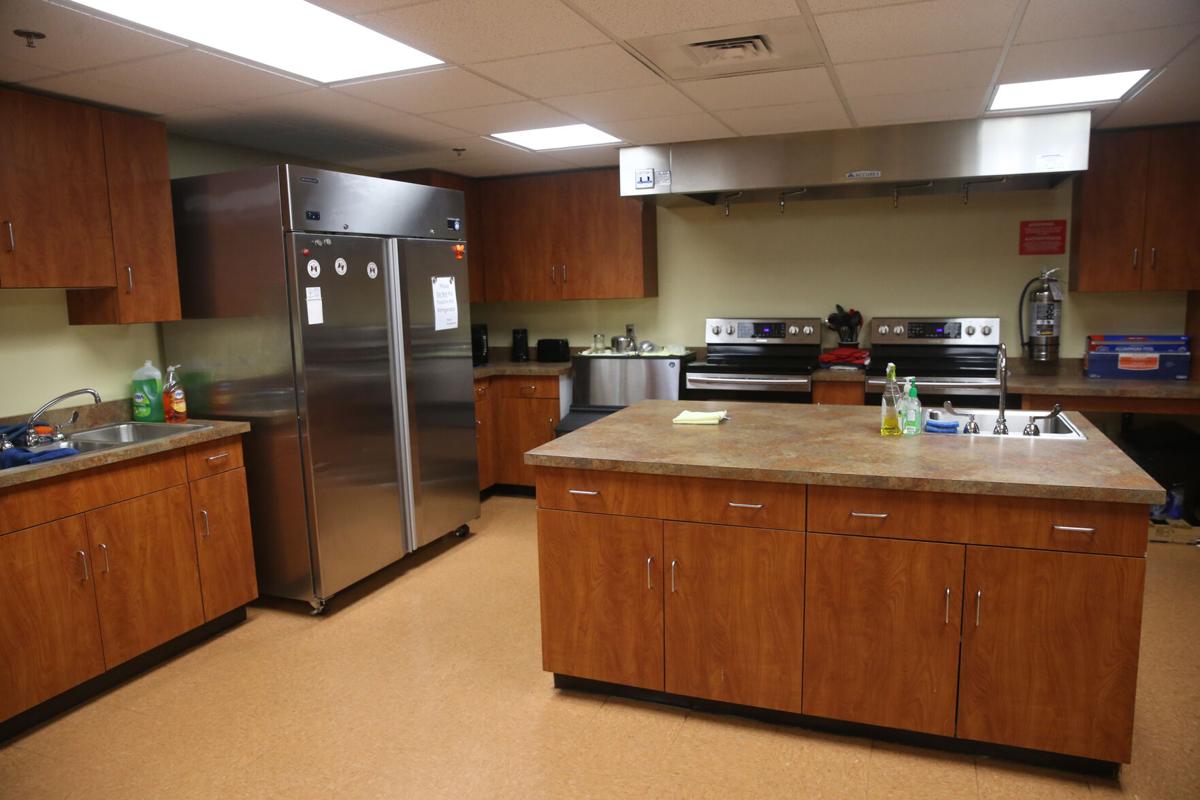 A kitchen in the basement of the Harvester Performance Center will be used for catering as part of a new master plan by Micah Davidson, director of operations. 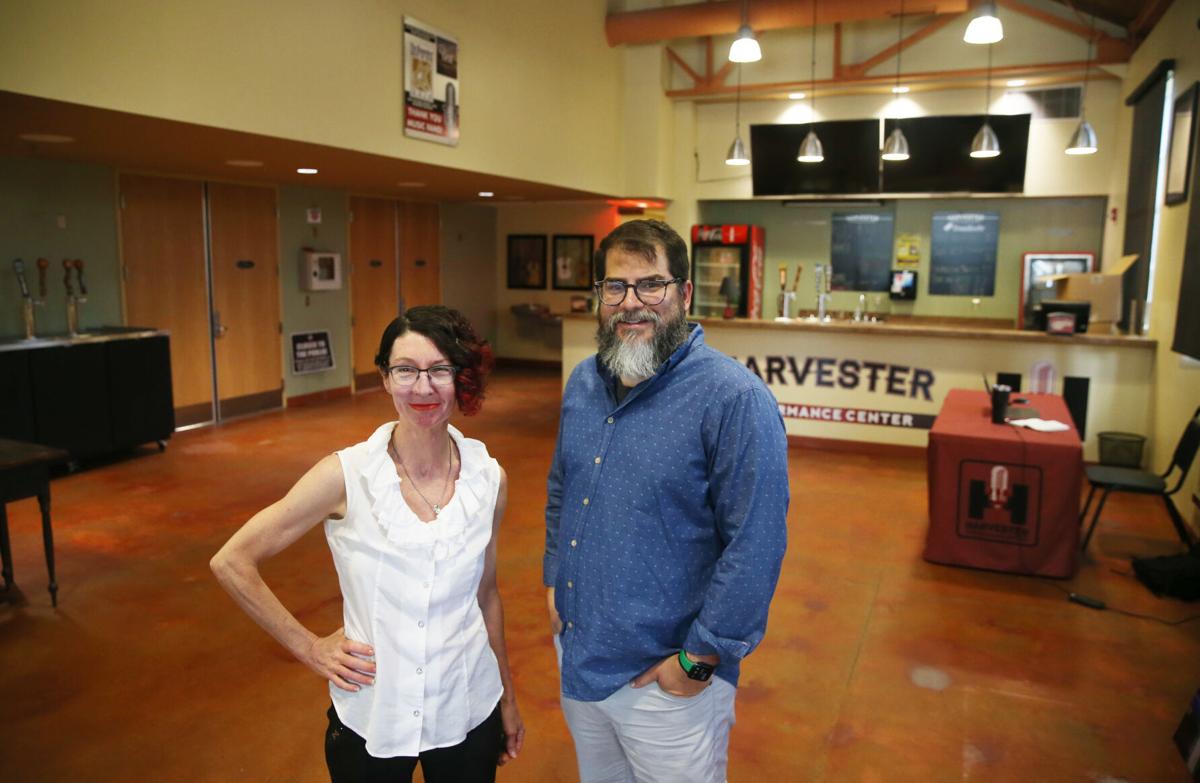 ROCKY MOUNT — The Harvester Performance Center has emerged from the COVID-19 pandemic shutdown with a completely new crew in charge.

The figurative makeover — with fresh faces not just booking shows but overseeing the town’s funding of the Harvester — will lead to a bit of a literal makeover, with new ways to sell seats, new levels of ticketing and a repurposing of some of the venue’s space.

The town launched the Harvester in April 2014 with a sold-out concert by the Indigo Girls and a goal of drawing in tourism dollars.

“It’s done exactly what it was supposed to do,” said Robert Wood, Rocky Mount’s new town manager, a Texas transplant who started work in May. “What we’re doing now is trying to take it up even to another level.”

A federal Shuttered Venue Operators Grant could help determine how high they reach, assuming the Small Business Administration approves the Harvester’s application. Official said the Harvester should qualify for aid in the first round of grants, earmarked for venues hit by a revenue loss of a 90% or greater during the COVID-19 pandemic.

His squad includes another newcomer, Jill Murphy, assistant director of operations, who previously booked events at The Hamilton Live in Washington, D.C.; and box office manager Rex Norris, the only employee carried over from before the pandemic shutdown.

Norris has been with the Harvester since it opened. “I can’t say enough about the appreciation I have for him still being here because of the wealth of knowledge he has,” Davidson said.

Phasing out the long lines

Throughout the past week, the Harvester has rolled out announcements of live concerts, including the first show Davidson has booked, by Grammy Award-winning mandolin virtuoso and singer Chris Thile.

Friday, when tickets to Thile’s Nov. 23 concert went on sale, the Harvester further unveiled changes to ticketing — allowing concertgoers to reserve specific seats, instead of selling them general admission.

The idea is that it gives visitors more time and reason to browse the town’s offerings, rather than queuing up to hurry inside when the doors open. “As opposed to having a line for an hour or two out front so on a sold out show, or any show for that matter, people get their best seat, they already know they’ve gotten the seat that they want,” Davidson said.

The new choices add levels of reserved seating: a dinner-and-show package that includes a catered, pre-show meal at the venue; and an elevated section at the back of the hall, featuring tables for four and wait service. These options will apply only to the new shows Davidson books going forward.

Offered as a $62 add-on to $92 VIP tickets to Thile’s performance, the catered meal will be served downstairs in the space previously referred to as the Landing Pad — which will no longer be used for performances, Davidson said.

Booking a table at the back of the main performance hall costs $508. For the Thile show, the Harvester is also offering regular reserved seating for $72 and six “partly obstructed” seats that are off to one the side for $67.

Shows that were originally booked prior to the COVID-19 cancellations and since rescheduled will still use the general admission system, Davidson said.

The Harvester’s post-COVID seasons formally launches Sept. 4 with a rescheduled performance by hard rock legends Blue Oyster Cult. Among the rebooked artists, Melissa Etheridge and Kenny Wayne Shepherd have sold out, Davidson said. “There’s limited tickets for Rosanne Cash, which is not until next April.”

Other artists in the rescheduled lineup include Amy Grant, Robert Earl Keen and Graham Nash.

“Gary helped create an incredible space and incredible venue, you know, for seven years,” Davidson said. “Ultimately I’m still trying to carry on his legacy, what he and the town have created here. I’m not reinventing the wheel.”

The changes to the Harvester go beyond the ticketing system, though. For one thing, the music venue’s staff are no longer town employees, said Assistant Town Manager Mark Moore. Instead, they are contracted with a limited liability corporation set up by the town to oversee the Harvester’s operations. It’s another step toward making the music venue a more independent entity.

Moore, who came to Rocky Mount in September after nine years as Pittsylvania County’s parks and recreation director, acts as the liaison between the town and the Economic Development Authority.

The town funds the EDA, which in turn provides funding to the Harvester, the idea being that the music venue is used as a promotional tool to raise the town’s profile. Rent paid by the Harvester to the town is also routed through the EDA. The complex setup allowed the town to benefit from historic tax credits while renovating the old Lynch Hardware Building into a music center.

The town’s fiscal year 2021-22 budget projects the Harvester’s expenses at about $405,000, with most covered by a transfer from the town of about $320,000 and the remainder to be covered by performance-related revenue.

“That sort of setup is not uncommon,” said Wood, the new town manager. “It might be a little bit less common with music venues, but with libraries and museums and botanical gardens and parks and a lot of those types of situations, you often have a public arm,” with a city or town paying for operations, “and then kind of a private arm,” that seeks funding from supporters.

The town eventually intends to convert the Harvester into a nonprofit entity funded through performances and donations. The town would continue to own the building, and the nonprofit would pay rent to use the space. “We have a potential timeline. We’ve got a very initial framework on how to potentially do it,” but plans aren’t developed enough to share details, Davidson said.

Interviewed Tuesday, town and Harvester officials were hopeful that they would learn by Friday whether the Harvester’s application for a federal Shuttered Venue Operators Grant had been accepted. Because the Harvester was completely shut down through the months of the pandemic, generating no revenue, the venue qualifies for the grant’s highest priority tier. Yet no word arrived Friday.

Movie houses and performing arts centers nationwide, including several arts and culture nonprofits in Roanoke, have applied for assistance through the SVOG program, which has experienced multiple glitches and delays.

Thursday, the New York-based National Independent Venue Association, along with the Association of Performing Arts Professionals, the National Association of Theater Owners, and four similar organizations, submitted a letter demanding that the Small Business Administration fund all eligible SVOG applicants. “The SBA’s repeated errors and delays have endangered the very businesses and organizations the program was designed to help,” the letter read.

To address the problem, the SBA has changed the leadership in charge of the grants, according to a National Independent Venue Association newsletter published Thursday.

The support that the Harvester receives from the town has allowed the venue to make reopening plans, and the off-time allowed the town to consider adjustments.

“We want to be good stewards of taxpayer money, whether it’s the Farmer’s Market or it’s the parks or those kinds of things, so we want to look for ways to tweak and make it better,” Moore said.

Criticism of the Harvester predates Wood, Moore and Davidson by years, often focused on the use of town funds to support an arts venue. Almost universally, arts and cultural organizations cannot cover their expenses through admissions revenue alone, and have to rely on donor contributions, sponsorships, grants and other sources for income.

Wood and Moore say that the Harvester functions well as a key part of a larger revitalization effort.

“Those that have been involved in the process of trying to get economic development, get different types of activities going, they’ve all agreed for a number of years that this is one of the big pieces of that puzzle,” Wood said.

Standing on a sidewalk along Franklin Street between the Harvester and the Farmer’s Market, Moore pointed south toward West Court Street. “On that top of that green hill there, that’s where the brewery is going.”

He was referring to Living Proof Beer Co., a new business which town council granted a special-use permit for construction in April on a 6-1 vote — the same meeting in which they made Wood’s hire official.

“That’s a piece of the revitalization,” Moore said, “spurring off of the Farmer’s Market, the Harvester, those kind of things.”

“It’s not just that there’s a nice building here and that there’s some music,” Wood said. “It helps put Rocky Mount on the map.”

Reserved seating will be allowed for newly booked shows scheduled at the Harvester Performance Center. Mark Moore, assistant town manager, left, and Robert Wood, town manager, are pictured walking behind the theatre where some remodeling will occur.

A kitchen in the basement of the Harvester Performance Center will be used for catering as part of a new master plan by Micah Davidson, director of operations.