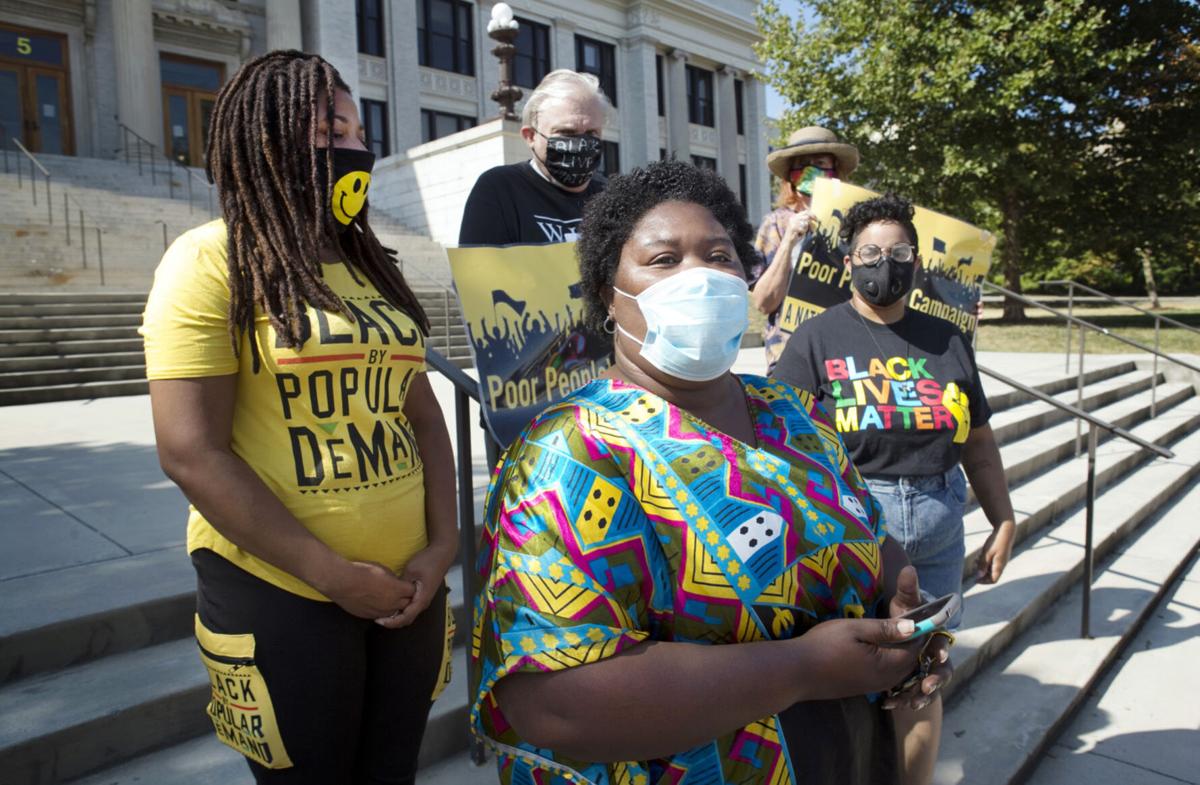 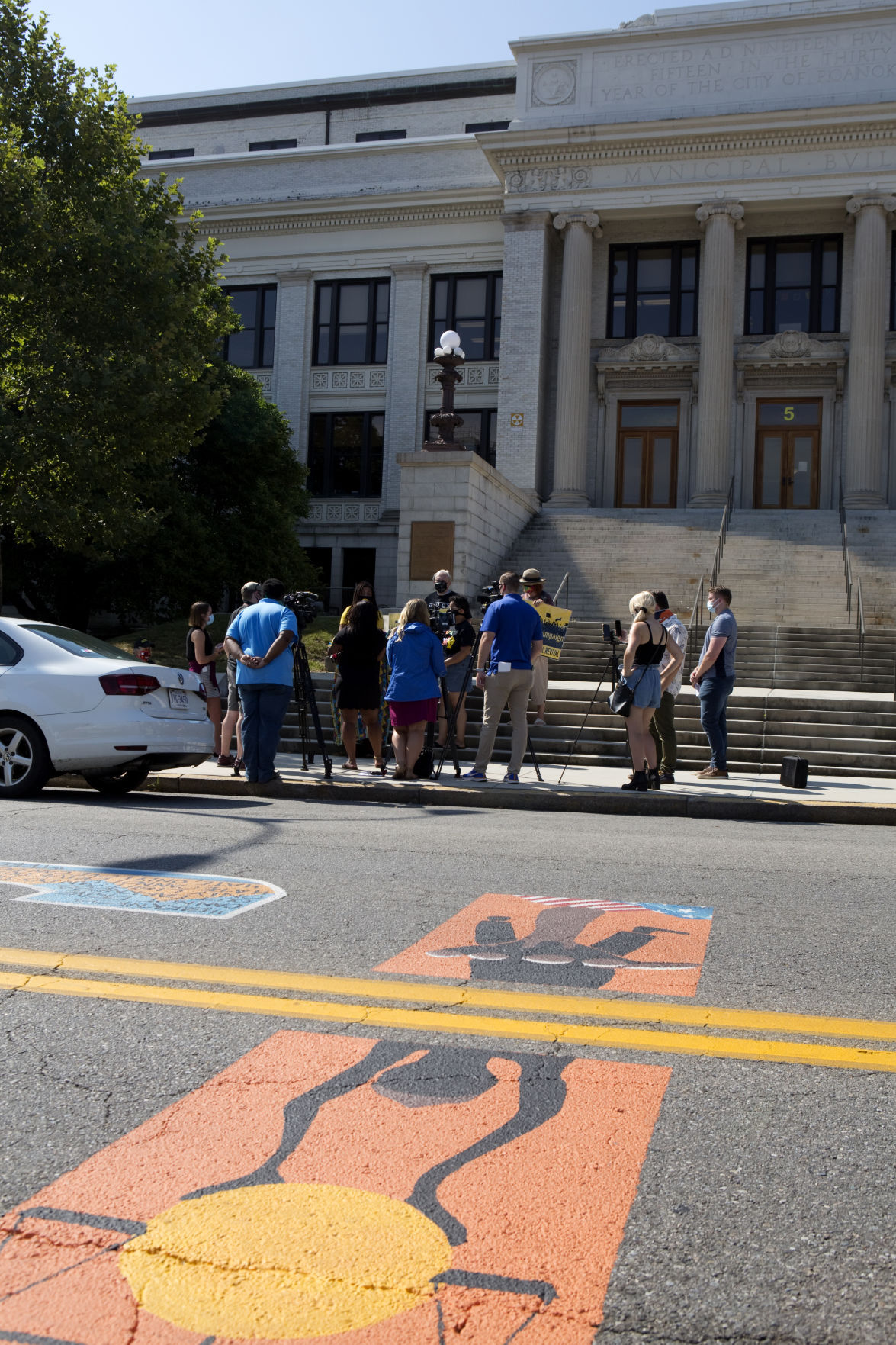 Bernadette "BJ" Lark, civic leader and teacher, and Tatiana Durant, the leader of No Justice No Peace Roanoke, identified seven steps for the community to take to help end racism at a news conference outside the city municipal building Thursday morning. They spoke near where the "End Racism Now" mural was painted this month on Campbell Avenue Southwest, pointing out that the mural is nice, but it is not enough to end systemic racism in Roanoke.

The organizer of a racial justice group in Roanoke recommended sweeping changes in schools, jails and the police department to abolish systemic racism.

Slashing funding for the Roanoke Police Department and decriminalizing drugs and nonviolent offenses were among seven steps that Tatiana Durant, organizer of No Justice No Peace, believes will help remedy racism in Roanoke.

But some of the ideas were quickly met with resistance.

Durant and Bernadette “B.J.” Lark, an activist and teacher, held a press conference Wednesday morning outside the municipal building. They recapped the protest of May 30 and the removal of the Robert E. Lee memorial marker, and listed demands to end systemic racism.

“Policing in this country was founded on slave catching and union busting,” Durant said. “We believe Roanoke City as a community can formulate peacekeeping and public safety outside of this institution.”

Durant said the group has not yet been in communication with police Chief Sam Roman, Sheriff Tim Allen or representatives of the school system about making these changes but is dedicated to seeing them through.

“We will not stop until we achieve these demands,” Durant said.

Removing suspension and expulsion in schools will empower children to make mistakes without fear of traumatizing punishment, Durant said. Decriminalizing drugs and theft will also allow for mistakes and put the focus on the source of the crime.

“People have reasons for committing crime, and it is well past time we look at those reasons for those crimes and invest in those issues rather than punishing people for reacting to them,” Durant said.

Other city officials also refrained from jumping on board with the proposed changes. Cutting funding for the police department would fall to City Manager Bob Cowell. He declined to comment on the conference, although city spokeswoman Melinda Mayo said she watched the conference on Facebook and didn’t hear many “focused thoughts” for the city administration to respond to.

Police Chief Sam Roman, who has spoken with members of No Justice No Peace in the past, cannot comment on decriminalization because it is not under his purview, said department spokeswoman Caitlyn Cline. The police department enforces the laws but can’t change them, she said.

But Durant said the organization hopes to work with these groups to create practical action steps to achieve the seven items on the list.

Lark revisited the events of May 30, during which she said a nonviolent protest was met with violence from police officers.

“You needed to reassure nonviolent protesters that they would have safe space to exercise their rights in these streets. It wasn’t a hard response,” Lark said. “Instead, we were told, and we now see that … brick and mortar and business would be protected as priority before our human lives.”

Lark referenced the mural in front of her on Campbell Avenue that reads “End Racism Now.”

How do we end racism now? Lark said the answer is simple.

Photos: No Justice No Peace lays out steps to help end racism in Roanoke

Campbell Avenue, in front of Roanoke City Hall, has become a canvas for a street mural against racism. Dozens of artists, painters and volunte…

Nationwide protests sparked by the death of an unarmed black man at the hands of police in Minneapolis reached downtown Roanoke on Saturday.

Bernadette "BJ" Lark, civic leader and teacher, and Tatiana Durant, the leader of No Justice No Peace Roanoke, identified seven steps for the community to take to help end racism at a news conference outside the city municipal building Thursday morning. They spoke near where the "End Racism Now" mural was painted this month on Campbell Avenue Southwest, pointing out that the mural is nice, but it is not enough to end systemic racism in Roanoke.