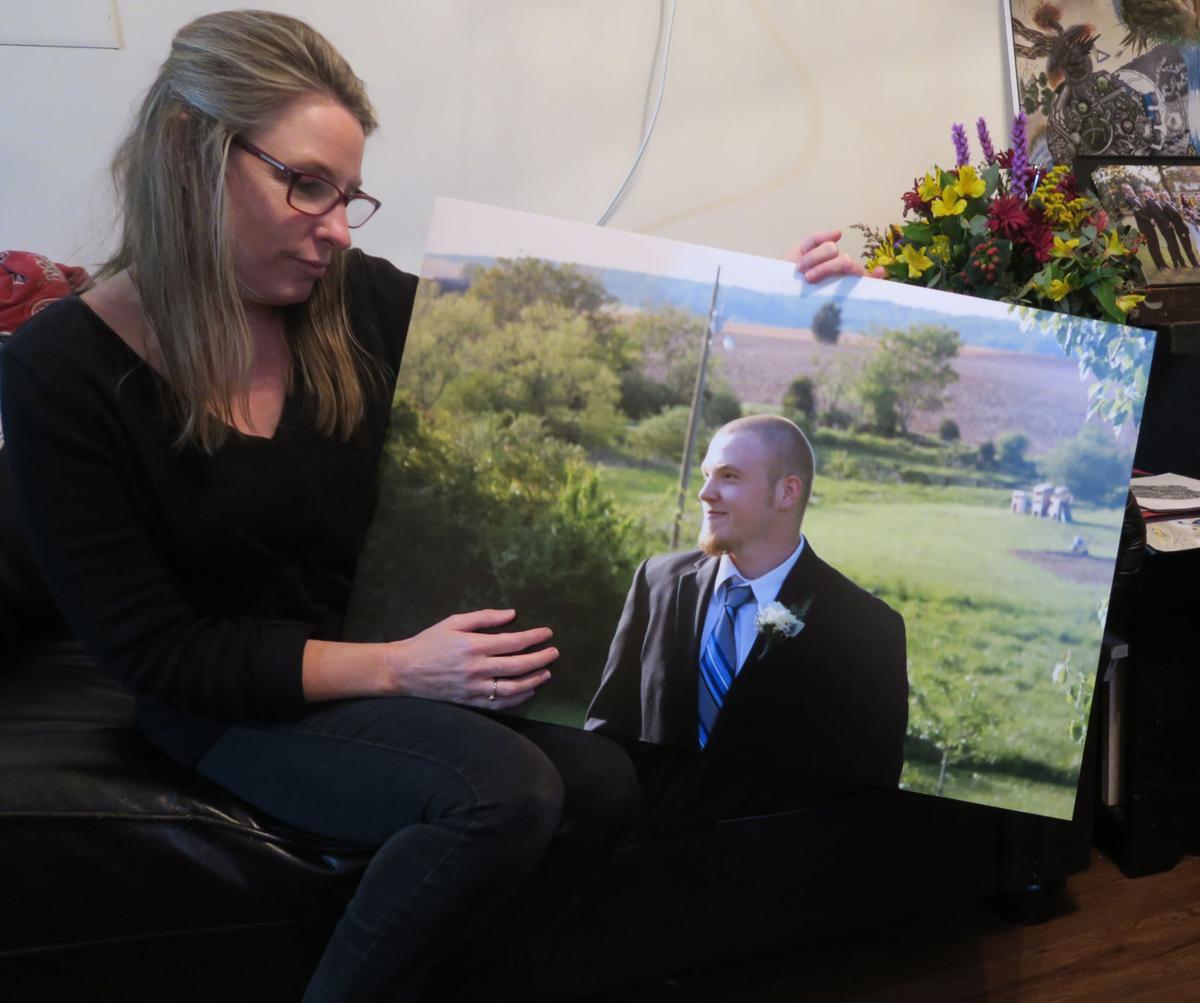 Dee Fleming holds a portrait of her son, Joe Fleming, who died Oct. 13 from a cocaine and fentanyl overdose. Cocaine and methamphetamine overdoses are on the rise statewide. 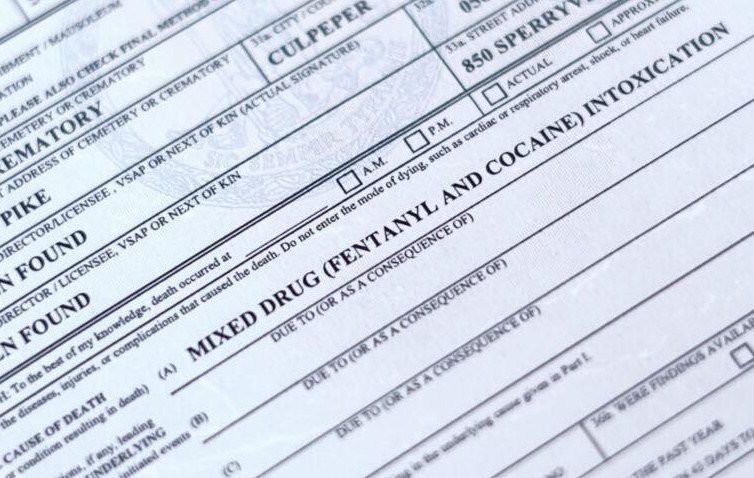 Dee Fleming thought her son, Joe, died from a heroin overdose until she received the death certificate ruling he died from a combination of cocaine and fentanyl. 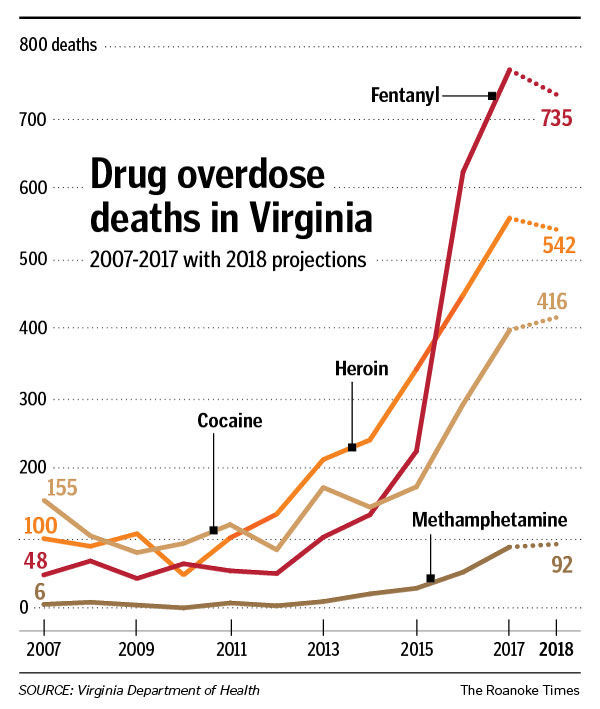 Dee Fleming had a funeral to attend.

Her son’s best friend died Oct. 9 from a drug overdose at his home in Culpeper County. As she got ready the morning of Oct. 13, another family member called.

Police had found her son, Joe, dead of an overdose in the same house. She attended her 23-year-old son’s funeral a week later.

“All of these lives ruined, all of this pain,” Fleming said.

At first, she assumed her son died of a heroin overdose since that’s the opioid that’s been dominating the public’s attention. When she received the death certificate, she was surprised to learn that her son had died from a combination of cocaine and fentanyl, an opiate painkiller 50 times more potent than heroin and 100 times more potent than morphine.

As the opioid crisis rages on, drugs like cocaine and methamphetamine have staged a little-noted comeback, including in the Roanoke region.

According to preliminary data released Tuesday by the state’s chief medical examiner, 398 people died last year from an overdose related to cocaine. And so far this year, more people have died after using cocaine compared with the same period last year.

Fatal cocaine overdoses in Virginia in 2017

After years of relatively stable numbers of cocaine overdoses in Virginia, in 2016, deaths increased 40 percent over the year before. In 2016 and 2017, fentanyl was implicated in more than 54 percent of cocaine deaths. With 19 fatal cocaine overdoses last year, Roanoke has one of the highest death rates in the state for cocaine.

Fatal methamphetamine overdoses were uncommon in Virginia for years. Within the past decade, there were years in which fewer than 10 people died. Around 2014, deaths started to increase, with higher rates in Western Virginia. Last year, 88 people died after using methamphetamine, up from 52 the year before. Most meth overdose cases have at least a prescription opioid, fentanyl or heroin that contributed to the death.

The medical examiner’s office expects both cocaine and methamphetamine fatalities this year to surpass 2017.

However, there was some good news in the medical examiner’s new report. With overall fatal drug overdoses statewide down so far in the first quarter of this year compared to the same time last year, the office projects that fatal overdoses may decrease this year compared with 2017. Last year, 1,538 people died in Virginia from a drug overdose, and the medical examiner’s office estimates that 343 people have died so far this year.

Some say there’s a higher demand for stronger drugs, so users are combining the substances intentionally. Others say dealers are cutting cocaine with fentanyl to make customers more addicted or get them hooked on opioids if that wasn’t their previous drug of choice. And then there are those who think sloppy dealers are accidentally contaminating drugs.

“You don’t know what you’re getting anymore,” said Dr. Paul Stromberg, an emergency medicine doctor at Carilion Roanoke Memorial Hospital. “If you’re buying anything from anyone off the street, you have no idea what’s been put into it and the chain of command.”

Fleming said her son’s friends told her that Joe never used heroin. She said after her son died, she learned from his friends that Joe had been using cocaine for at least a year.

“It’s just so dangerous,” Fleming said. “Moreso nowadays, because it only takes one time. People keep saying it doesn’t make sense, but it doesn’t have to make sense. I’m scared for my friends who have children who abuse any kind of drugs.”

Law enforcement officials have noted fentanyl pressed into pill form, for instance. As little as 2 milligrams of fentanyl might lead to a fatal overdose.

“None of us are safe,” Special Agent Joe Crowder, with the Virginia State Police drug enforcement division, told an audience of concerned parents at an educational event at William Fleming High School earlier this year.

Because cocaine is a stimulant and fentanyl is a depressant, using both at the same time and being unaware of what is laced with the stimulant can be especially dangerous.

“With fentanyl, it works so fast, and it’s such a potent drug, an overdose can happen quickly before you realize you’re in trouble,” Stromberg said.

Prevention workers say they can’t have a narrow focus.

The Roanoke Valley Hope Initiative, which works to connect people suffering from substance abuse disorders with treatment, publicizes that it will help people battling any substance abuse addiction, whether it’s heroin, cocaine or alcohol. The program invites people to come to the Bradley Free Clinic or Roanoke Police Department to begin the process.

“We have to shed the stigma and shame and talk about this problem as a whole community,” said Nancy Hans, who does work for the Hope Initiative and is the executive director of the Prevention Council of Roanoke County.

Dee Fleming would like to see wider distribution of inexpensive test strips that can be used to determine if a drug contains fentanyl.

In Culpeper County, Joe Fleming was one of five people to die of a cocaine-related overdose last year. He worked two jobs, enjoyed the outdoors and was the family clown.

Looking back, his mother said signs were there. She noted his weight loss. She said one of her three other surviving sons said Joe was dealing with depression. Another son told her he knew Joe once tried cocaine.

“We all had these little pieces and weren’t working on the puzzle together,” Fleming said.

Sitting at her son’s best friend’s funeral, knowing she now had to bury her own son, she thought, “This is ridiculous, people are dying every single day, and no one in my town is talking about it.”

She’s since started a community effort in Culpeper to spread awareness. She organizes events for people to learn about drug trends and resources, information she didn’t have to intervene in her son’s life sooner.

“This is how I’m surviving going forward,” Fleming said. “It’s too late for my son, but it’s not too late for someone else’s kid.”

For parents and guardians, identifying the signs of addiction in teenagers is not always easy.

The Roanoke Valley has joined the legal battle over the opioid addiction crisis with Roanoke, Roanoke County and Salem all filing civil suits …

Dee Fleming holds a portrait of her son, Joe Fleming, who died Oct. 13 from a cocaine and fentanyl overdose. Cocaine and methamphetamine overdoses are on the rise statewide.

Dee Fleming thought her son, Joe, died from a heroin overdose until she received the death certificate ruling he died from a combination of cocaine and fentanyl.