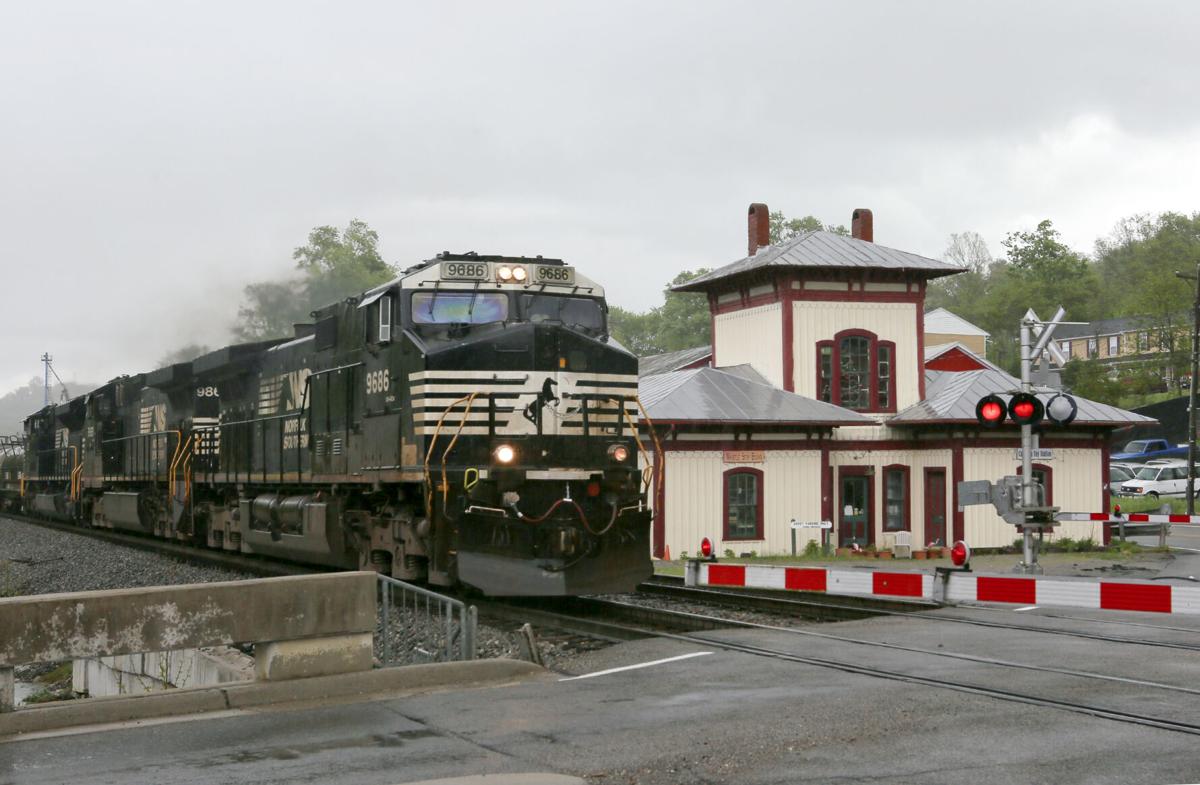 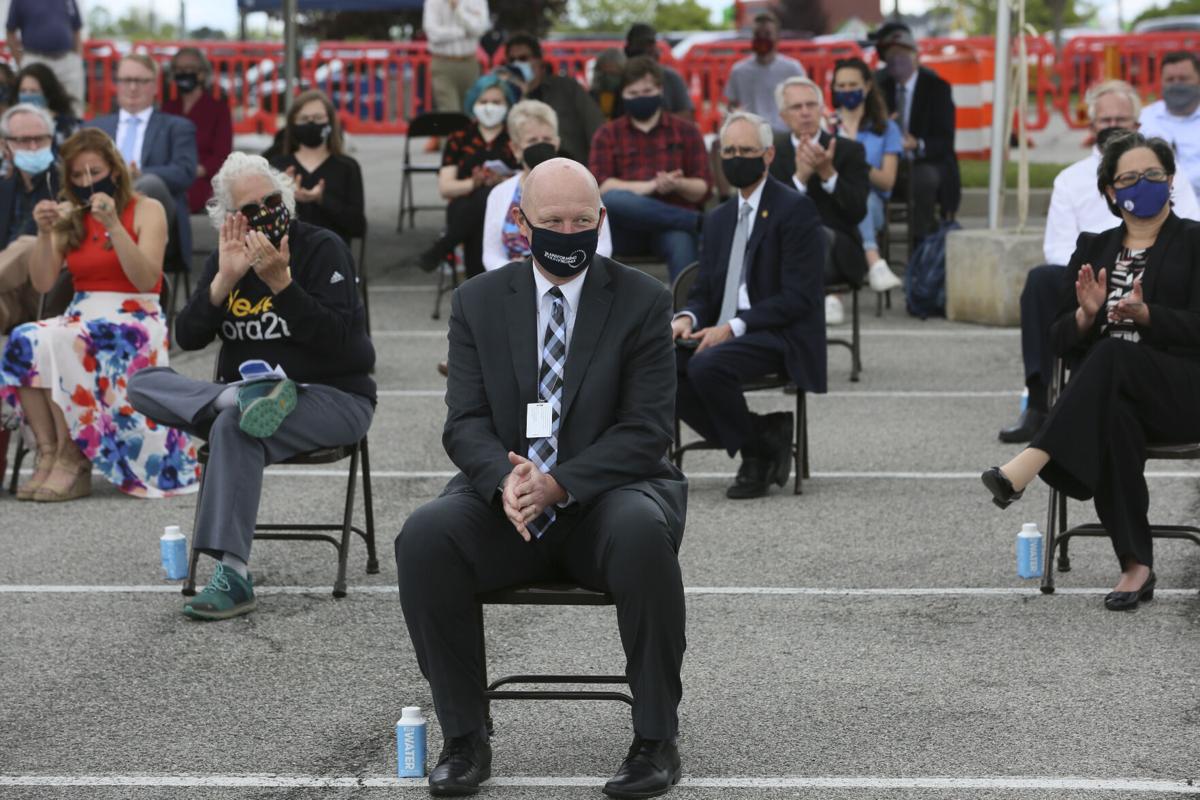 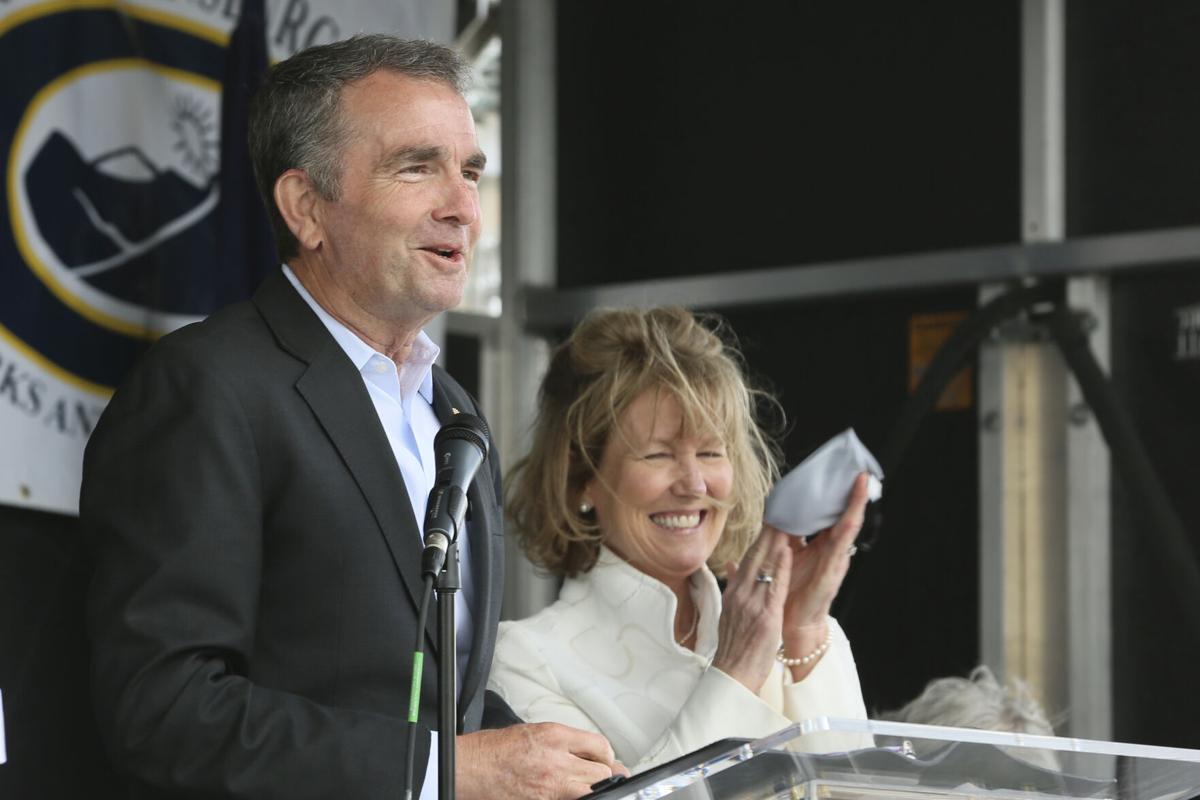 Gov. Ralph Northam and Virginia Transportation Secretary Shannon Valentine announced Wednesday that Virginia has reached an agreement with Norfolk Southern to extend passenger rail to the New River Valley and increase the intercity service from Roanoke to the Northeast Corridor.

CHRISTIANSBURG — Gov. Ralph Northam has announced that Virginia has reached an agreement with Norfolk Southern Railway to extend passenger rail to the New River Valley and increase the intercity service from Roanoke to the Northeast Corridor.

Northam shared the milestone development Wednesday during an event just outside of the Regal New River Valley & RPX movie theater in Christiansburg. He was joined by a number of public figures, including several lawmakers, Virginia Secretary of Transportation Shannon Valentine and Norfolk Southern CEO James Squires.

Wednesday’s announcement marks a major step in a yearslong effort to return passenger rail to the New River Valley and add on to the existing Amtrak service in Roanoke. Officials estimate 80,000 new riders will use the service during the first year of the extension to Christiansburg, sometime after improvements are completed in 2025.

The Salem to Christiansburg improvements include signaling and track upgrades and an investment in a maintenance facility, passenger platform and station.

Along with extending a passenger rail line to Christiansburg, the rail initiative involves the addition of a second train from Roanoke to Washington, D.C., by next year. Valentine touted the impressive ridership figure out of Roanoke, which she said provided much encouragement for the extension to the New River Valley.

Among the figures Valentine highlighted was how rider numbers for the passenger line that serves Roanoke rose by 77% from 2009 to 2019.

“This route … today has the highest ridership of any train in Virginia and is consistently among the most profitable in the United States,” she said.

A few of the state officials, including Northam, also said the greater goal for Southwest Virginia is to extend passenger rail to Bristol.

In a response to a question about the Bristol objective, Northam told reporters rural Virginia holds a special place in his heart and that he wants to help expand access to those “beautiful” parts of the state. He said rail also provides an alternative to the often difficult Interstate 81 corridor, something the state is dedicating great efforts to improving.

One group that Northam said would surely benefit from the alternative is the region’s college students.

“With Virginia Tech and Radford [University], I think you’ll see a lot of students take advantage of our rail,” he said.

Northam’s comments about student ridership echoes one of the objectives of the New River Valley rail project. The governor, along with a few others, said it will also boost tourism and is expected to have an annual economic impact of $2 billion for the region.

The announcement comes more than a month after Northam signed legislation authorizing the creation of the New River Valley Passenger Rail Station Authority, an entity that will allow a number of regional partners to share in the cost of building and maintaining a train station.

Among the other details shared Wednesday is a plan for the state to partner with New River Valley rail authority to fund the construction of a station building, parking and roadway access to the station.

The rail authority is slated to include representation from all the local governing bodies in Montgomery County and will be open to the entities across the greater New River Valley, including those in Giles County and even New River Community College.

The infrastructure improvements are expected to be complete by 2025. Afterward, two Northeast Corridor round trips will be extended from Roanoke to Christiansburg.

The town of Christiansburg itself has already purchased some parcels near its aquatic center off of North Franklin Street for a station, but Mayor Mike Barber said on Wednesday that where exactly in the locality the station will be located has not been finalized.

Christiansburg town officials have previously said that the parcels they purchased would be used for additional aquatic center parking should the station somehow not be established in that area.

Barber, however, said the station will be in Christiansburg.

“It’s the logical place, without question,” he said.

Local studies have designated Christiansburg as the best spot due to the town being more conveniently located for the main passenger groups. Research has found that most passengers would come from either Blacksburg or Christiansburg.

Several speakers on Wednesday touted the efforts to extend passenger rail in the New River Valley, particularly the work of a local campaign. Valentine specifically praised the role of the Lynchburg service, which launched as a pilot in the fall of 2009 and paved the way for the future expansions.

Among the speakers was Del. Christ Hurst, D-Montgomery, who sponsored the legislation for the creation of the New River Valley rail authority.

Hurst said he owes much of his effectiveness in Richmond to the push at the local level and pointed out a few elected officials across Montgomery County.

“You all continue to show up and deliver for your people,” he said. “We are literally putting the New River Valley on the map today and that is a hell of a deal to celebrate.

Photos and video: From announcement of the return of passenger rail to the New River Valley

NRV passenger rail: Next steps not likely to include station near Christiansburg Aquatic Center

New River Valley residents can now look forward to no longer having to drive to Roanoke to catch a train to Washington D.C., but key particulars of the plan to return passenger rail to this exact part of Virginia still need to be ironed out.

Gov. Ralph Northam and Virginia Transportation Secretary Shannon Valentine announced Wednesday that Virginia has reached an agreement with Norfolk Southern to extend passenger rail to the New River Valley and increase the intercity service from Roanoke to the Northeast Corridor.