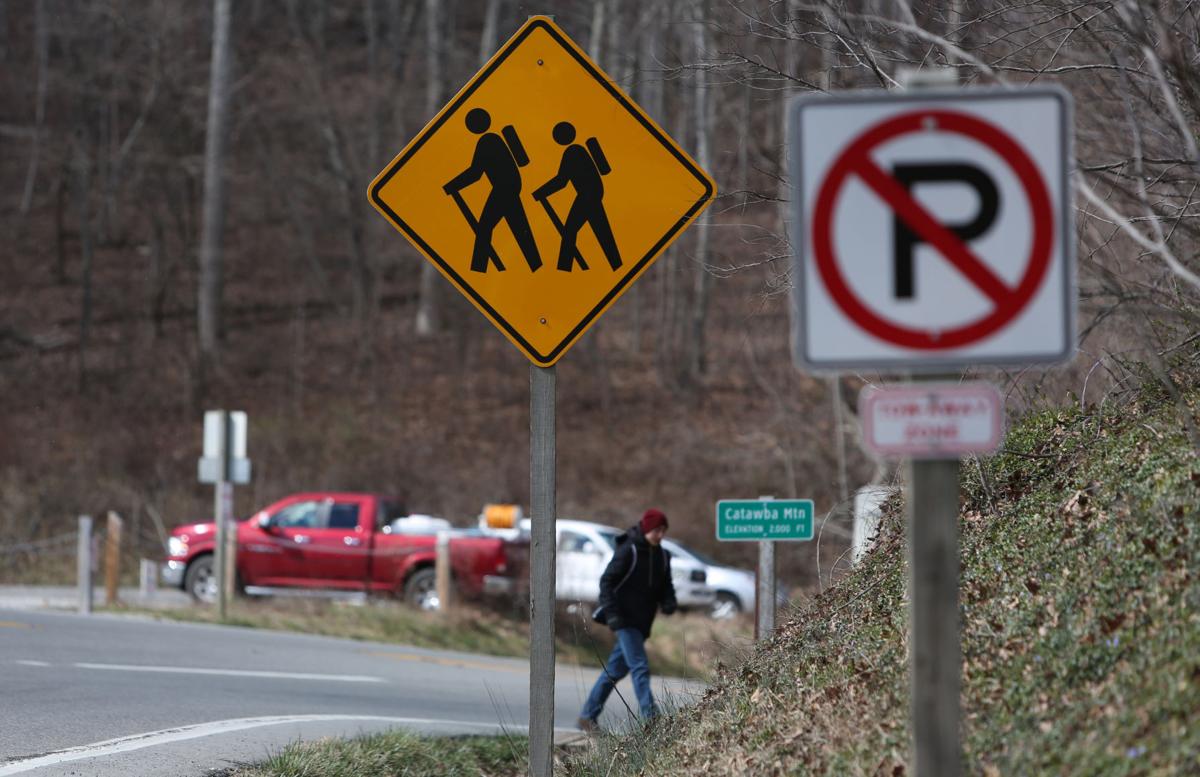 A hiker crosses Virginia 311 from the McAfee Knob parking lot to the trailhead. A new pedestrian bridge that will be completed by 2024 will eliminate the dangerous trek across the busy highway. Motorists have a limited view of the crossing. 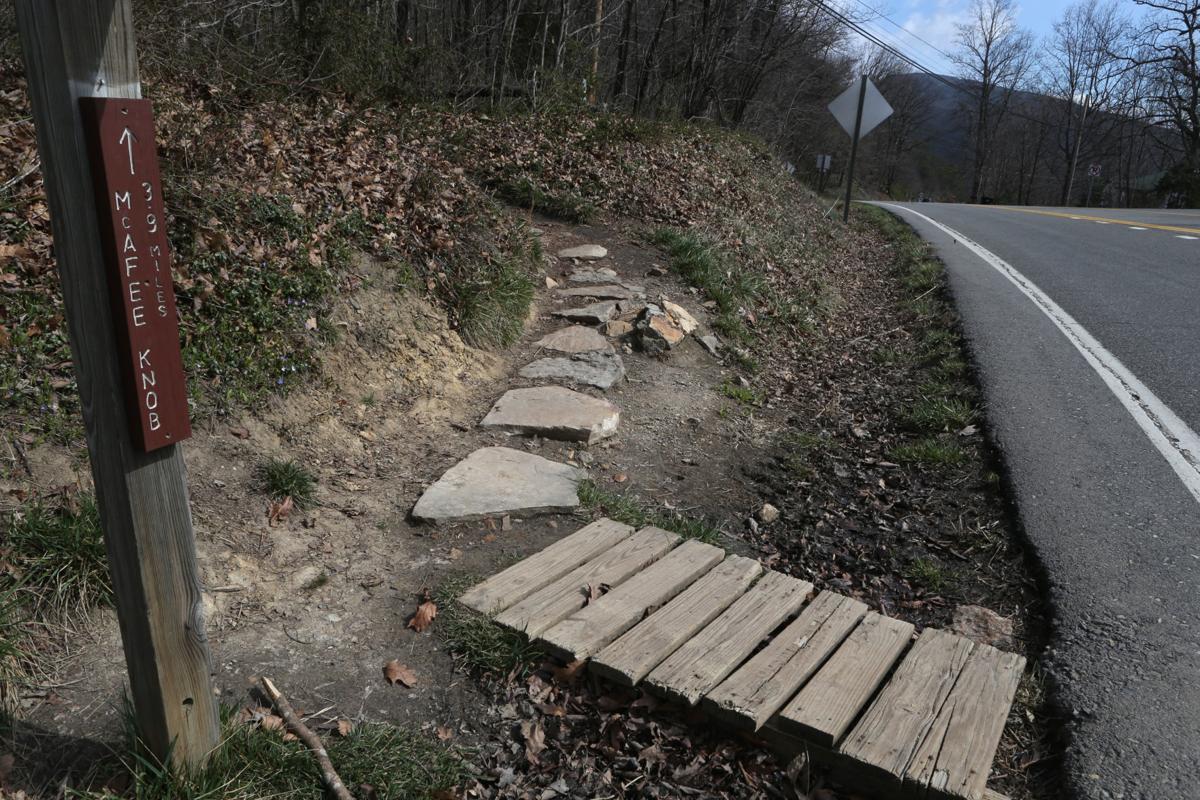 The trailhead for McAfee Knob is on Virginia 311 at the crest of Catawba Mountain in Roanoke County. Hikers who leave their cars at the small parking lot must venture across the busy highway to get to the trail.

The pedestrian bridge over Virginia 311 is scheduled to be completed by 2025. An earlier version of this story was incorrect on the date.

Plans are underway to revamp the McAfee Knob trailhead in Roanoke County, including building a pedestrian bridge that would take hikers over a busy stretch of Virginia 311.

A $2.3 million highway safety grant has been approved by the Virginia Department of Transportation for the bridge, according to Andrew Downs, a regional director for the Appalachian Trail Conservancy.

The Appalachian Trail crosses 311 near Catawba on the way to McAfee Knob, one of the most photographed sites along the 2,180-mile scenic footpath. Over the past decade, the landmark has seen a huge increase in hikers who must negotiate traffic on the two-lane highway before starting their trek to the rocky outcrop.

In addition to improving safety, Downs said, the bridge and other planned improvements — including the purchase of an adjacent piece of property and a redesign of the trailhead parking lot by the National Park Service — will help preserve a community icon.

“It really can’t be overstated, the contribution of McAfee Knob, to our region’s identity,” Downs said. “It’s on the county logo, and you can’t spend a day in the Roanoke Valley without seeing it somewhere.

“It is our poster child for high quality of life.”

VDOT spokesman Jason Bond said the agency plans to hold a public meeting this spring or summer to discuss the project. Construction is scheduled to be completed by 2025, he said. Additional details were not available Wednesday.

A laser counter recorded between 40,000 and 50,000 visitors to the McAfee Knob trailhead last year.

“We’ve seen exponential growth in the past 10 years,” Downs said.

With so many hikers — and about 9,400 vehicles passing by each day, according to VDOT traffic counts — “it’s dangerous to try to cross 311,” said Jim Beeson, president of the Roanoke Appalachian Trail Club.

Trail officials said they were not aware of any serious accidents. Data from the Roanoke County Police Department was not available Wednesday.

“This is VDOT being proactive about a visitor safety issue,” Downs said of the grant, “where so many times we see our state and federal governments operating in a reactive mode.”

With plans for the bridge moving forward, the trail club and the conservancy decided to start a public fundraising campaign to purchase a 7-acre tract of land at the intersection of 311 and Old Catawba Road, just south of where the Appalachian Trail traverses the ridge and crosses the highway.

Organizers hope to raise $200,000 by the end of the year. If they are successful in buying the land, it would be donated to the National Park Service or another entity that would incorporate it into the trailhead area.

The property’s owner is a trail supporter who is willing to sell but has been approached by multiple developers, according to a mailing sent to Roanoke Appalachian Trail Club members this week.

“With that level of visitation, people have to be thinking about some kind of commercial operation,” Downs said. “I don’t think that would be complimentary of the AT experience.”

Acquisition of the land is seen as a key component of a $300,000 study by the National Park Service, which is considering improvements to a gravel parking area. Paving the lot, constructing a building that would include bathrooms and erecting more sophisticated signs are among the possibilities.

With all the changes afoot, “we just saw this as a window where the opportunity was there, and we wanted to act as quickly as possible” to acquire the land, Beeson said.

The trail conservancy has donated $25,000 of a $60,000 grant it received from Diana Christopulos, a local environmental advocate who last year was named the 2019 National Cox Conserves Hero, an annual award presented by Cox Enterprises and the Trust for Public Land. Winners of the grant can donate it to the nonprofit of their choice.

Another $10,000 pledge has been made by the trail club. Information on how to donate can be found at appalachiantrail.org.

While the increase in visitors is seen as a good thing, it has caused more work for the trail club, which maintains a 120-mile stretch of the footpath through Southwest Virginia.

“I would say the trail is being run to death,” Beeson said. “Any sort of heavy foot traffic on any trail will take its toll.” He estimated that the club did about 40% of its work on the 4-mile McAfee Knob trail last year.

The heavy use comes amid growing popularity of what’s known as the Triple Crown, in which hikers from near and far take on the neighboring peaks of Dragon’s Tooth, McAfee Knob and Tinker Cliffs.

“It’s becoming a hiking destination for people all over the country,” Beeson said.

College students are also part of the growing numbers, many of them drawn in by images on social media.

“Everyone wants to get their picture taken on the knob with their feet hanging over the edge,” Beeson said.

Plans are moving forward to run the Appalachian Trail across a pedestrian bridge, giving hikers a safer route as they begin the popular trek t…

Officials are increasing the number of “No Parking” signs and tow-away warnings on Virginia 311 at the crest of Catawba Mountain.

Rising popularity of McAfee Knob spurs stakeholders to come together

The cars often start popping up in the wee hours of the morning on the weekends.

A hiker crosses Virginia 311 from the McAfee Knob parking lot to the trailhead. A new pedestrian bridge that will be completed by 2024 will eliminate the dangerous trek across the busy highway. Motorists have a limited view of the crossing.

The trailhead for McAfee Knob is on Virginia 311 at the crest of Catawba Mountain in Roanoke County. Hikers who leave their cars at the small parking lot must venture across the busy highway to get to the trail.