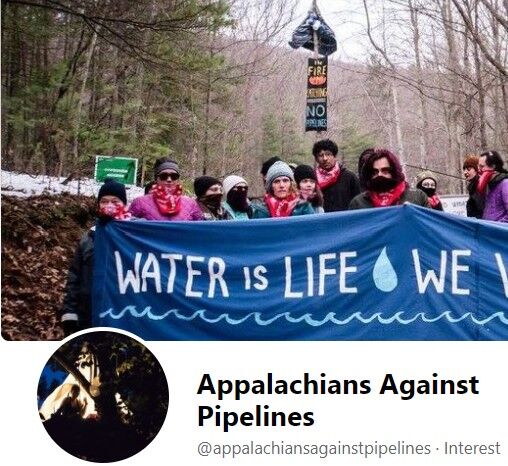 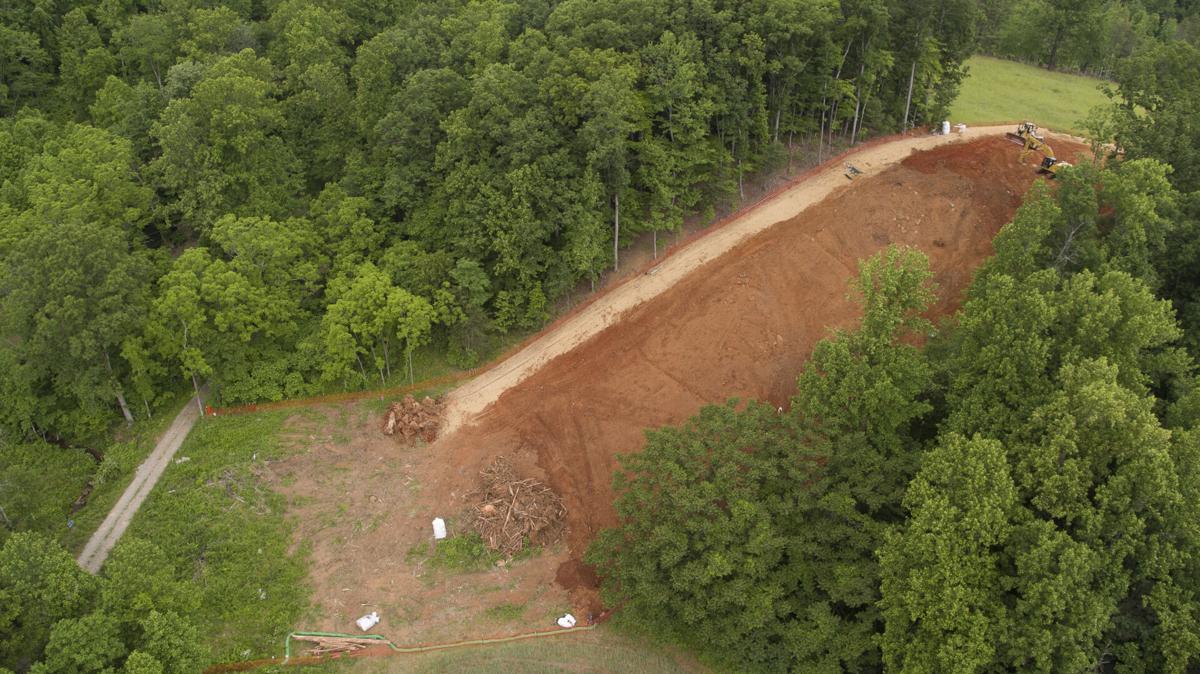 An aerial view shows a section of land being prepared for the Mountain Valley Pipeline, stopping short of a creek.

Mountain Valley Pipeline LLC does not appear to have found a friend in Facebook.

The company building a natural gas pipeline through Southwest Virginia filed a subpoena in a civil case, asking Facebook to reveal the identities of the people who set up its Appalachians Against Pipelines page anonymously.

Two months later, it is still waiting for a reply.

At a hearing last week in Roanoke’s federal court, attorney Seth Land said the company has not heard back from Facebook. He declined to elaborate after the hearing, referring questions to a company spokeswoman.

“As a matter of policy, we do not share detailed information regarding litigation strategy,” Natalie Cox wrote in an email.

Mountain Valley contends in court papers that it needs to know the names, emails and phone numbers of those who manage the Appalachians Against Pipelines Facebook page to address “serious safety issues” raised by protesters at a construction site.

The company asked for the records as it tries to determine what role the anti-pipeline group played in encouraging opponents to show up Aug. 11 at the Bent Mountain property of John Coles and Theresa “Red” Terry.

Mountain Valley says the protesters risked the safety of themselves and pipeline workers by standing within 50 feet of loaded explosives that were being using to blast a path through bedrock for the buried pipeline. It is seeking an injunction that would require observers to maintain a safe distance in the future.

Issued Aug. 20, the subpoena asked that Facebook respond by Sept. 17.

While Mountain Valley says it needs the information to ensure public safety, others counter that the subpoena is nothing more than an effort to unmask and intimidate the company’s anonymous critics.

“MVP is harassing grassroots political opponents by seeking personal information about activists working to protect those harmed by an unnecessary and dangerous fracked gas project,” Appalachians Against Pipelines said in a statement.

A representative for the group said last week that it has received no communications from Facebook about the subpoena.

An attorney for the Electronic Frontier Foundation — a San Francisco-based nonprofit that advocates for privacy and free speech on the internet — has said it has concerns about a company seeking to unmask its critics without good cause.

If Mountain Valley is to get the information it wants, it would have to show a legitimate need that outweighs the right of Appalachians Against Pipelines organizers to remain unidentified, according to Bennet Kelley, a lawyer who runs the Internet Law Center in Santa Monica, California.

“Anonymous speech has long been protected speech, going back to the Federalist Papers,” Kelley said, referring to the writings of America’s founders, who used the pen name “Publius” in newspaper pieces to avoid retaliation for their support of the U.S. Constitution.

Facebook did not respond to four emails from The Roanoke Times asking whether it had complied with the subpoena. Two emails were sent last month, shortly after the documents were filed, followed by two more last week.

The social media giant’s webpage for news media inquiries does not include a phone number.

On its website, Facebook says it shares information with regulators, law enforcement or others if it has a “good faith belief that the law requires us to do so.”

That decision is made if there are legal requests such as a search warrant, court order or subpoena, the website states. Some the reasons listed for disclosure include the prevention of fraud, unauthorized use of products, violations of Facebook policies, or other “harmful or illegal activity” that could result in imminent bodily harm or death.

The site does not specifically address subpoenas filed in civil cases, such as Mountain Valley’s request for an injunction that would keep pipeline protesters away from its blasting work.

Facebook’s silence to date does not mean the issue is over, Kelley said.

With nearly 3 billion active users a month, Facebook gets a huge number of subpoenas and often does not reply by deadlines imposed by the courts, Kelley said. Priority is usually given to criminal matters.

If Facebook resists the subpoena — or, more likely, remains silent — it would fall to Mountain Valley to file a motion to compel, which would bring the matter before a federal judge to decide, he said.

Appalachians Against Pipelines’ page on Facebook, which has more than 21,000 followers, regularly contains information about protests of Mountain Valley and other pipelines.

When two people were camped out in tree stands in Montgomery County, blocking construction for more than two years, the Facebook page carried regular updates and sometimes featured interviews and cellphone camera footage from the anonymous activists.

The page was set up in 2018, about the time that construction of Mountain Valley started. Its managers requested that they not be identified, which is allowed by Facebook.

At last week’s hearing in U.S. District Court in Roanoke, the issue of subpoenas to Facebook came up briefly. Land said the social media company has limits on what it will provide. When Mountain Valley asked what kind of information might be available, it received no further response, he said.

The hearing focused mostly on a separate subpoena in which Mountain Valley sought, among other things, emails and social media comments to or from Red Terry about the Aug. 11 gathering of about 20 people on her Bent Mountain property.

Mountain Valley has suggested in court papers and Terry encouraged people to show up to stop the blasting, and relied on groups like Appalachians Against Pipelines to spread the word through social media.

The protesters stood dangerously close to explosives, and some of them were smoking cigarettes, the company says. When they refused to leave, Mountain Valley suspended the detonation of explosives that had already been placed in holes drilled into the rock.

Later that day, after the opponents had left, construction crews finished the blasting with the approval of the U.S. Bureau of Alcohol, Tobacco, Firearms and Explosives, Mountain Valley says in court papers.

Terry contends that the blasting was a threat to drinking water on Bent Mountain, which has an unusually high aquifer, and that Mountain Valley was not being forthcoming about its plans.

The company has been cited repeatedly for violating environmental standards meant to control erosion and sedimentation. Opponents often monitor the work by standing just outside of a 125-foot wide right of way for the pipeline’s path through the counties of Giles, Craig, Montgomery, Roanoke, Franklin and Pittsylvania.

Terry’s attorney, Joe Sherman of Norfolk, argued that construction crews did not follow a plan that required notification of property owners at least 24 hours before blasting began, and a notice of where it would occur.

The subpoena was overly broad, Sherman said, calling it a “fishing expedition” would amount to an invasion of privacy.

U.S. District Judge Elizabeth Dillon sided with Mountain Valley, ordering Terry to turn over the requested information by Nov. 3. A hearing has not yet been scheduled on the company’s request for an injunction that would keep observers at bay.

Mountain Valley Pipeline seeks the identity of its anonymous critics

Mountain Valley Pipeline has filed a subpoena with Facebook, asking it for the identities of the people who set up the Appalachians Against Pipelines page.

An aerial view shows a section of land being prepared for the Mountain Valley Pipeline, stopping short of a creek.