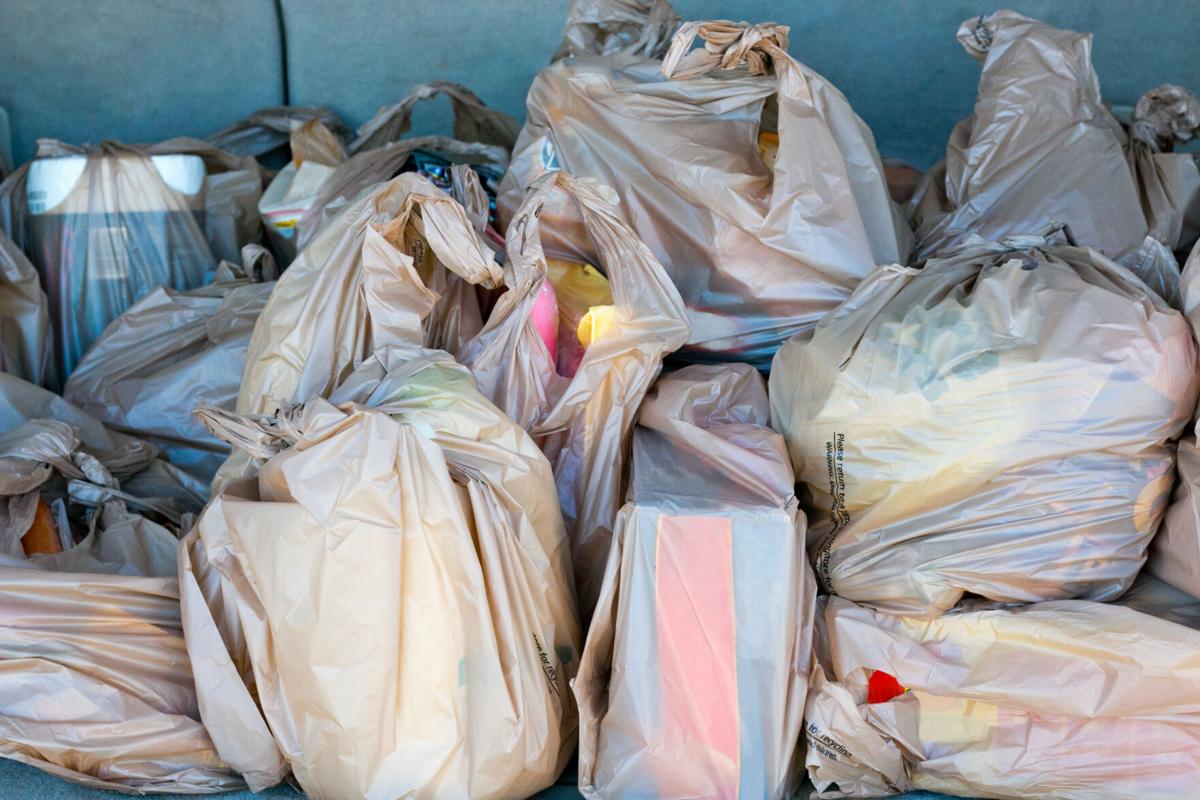 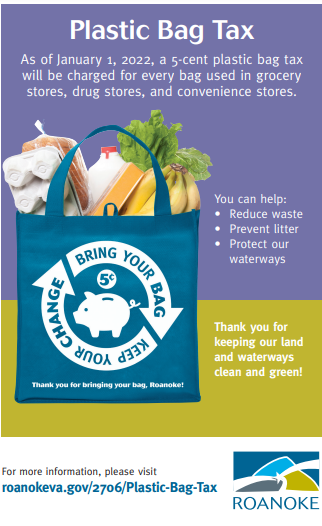 Soon after New Year’s would be a good time to rethink the two options for bagging purchases while shopping in Roanoke, one bad for the environment and one good.

Or you can kick the habit, bring your own bags to the store and pay nothing.

“Keep your change. Bring your bag,” the city says in its campaign slogan.

Officials hope the new tax curbs use of plastic shopping bags and their damaging environmental effects by creating an incentive for shoppers to switch to reusable bags, such as those made of jute, hemp, cotton or synthetic fiber. It aligns with an expansive campaign against single-use plastics that also encourages carrying a refillable water bottle instead of buying bottled water.

Taxing shoppers to cut back on plastic use has already happened in places such as Washington, D.C., which has reported reductions in bag pollution since its law began in 2010. Washington’s slogan is Skip the Bag, Save the River. That’s the Anacostia River.

Northern Virginia localities have bag taxes that will also take effect next year.

The Roanoke ban will strike some as imperfect. It doesn’t apply at home-improvement outlets Lowe’s and Home Depot or department stores such as Kohl’s or Belk, though it will apply at Walmart, Sam’s Club and Target. In addition, it’s unclear whether a tax this size will alter behavior. Using an environmental group’s estimate that the typical American family takes home 1,500 bags a year, paying the tax would cost $6.25 a month or $75 a year.

Denver, whose slogan Roanoke borrowed, taxes plastic shopping bags at a dime each.

Here’s a look at more details:

What’s going on? Roanoke is on track to become one of the first cities in the state to tax plastic shopping bags received at checkout to carry purchases.

What bags are taxed? Disposable plastic bags provided at grocery stores, convenience stores and drug stores. The city estimates that 130 retailers will owe the tax and expects most to pass the cost onto customers.

Any exceptions? Yes. No tax will apply to paper bags, nor to the thin, clear bags often provided in produce and meat departments to carry loose or wet foods such as potatoes, kale, ice cream or meat.

What if I order my groceries online? Doesn’t matter. The tax applies to bags used for in-store purchases, curbside pickup, to-go purchases and delivered goods.

Are big box stores covered? Mostly. Because Walmart, Target and Sam’s Club locations contain a grocery store, they’re obligated to tax every plastic shopping bag distributed regardless of what the customer buys, whether it’s a bottle of anti-freeze or a cantaloupe.

What about neighborhood convenience stores? They’re likely to be covered by the new law.

What if I receive government assistance to buy food? People who buy food with financial assistance from Virginia’s Women, Infants, and Children program and the Supplemental Nutrition Assistance Program cannot use their benefits to pay bag fees they owe. They must pay them with cash, check or their own bank card.

What happens to the money? Participating Roanoke stores must send 3 cents of every nickel collected to the Virginia Department of Taxation monthly. They can keep the rest to offset their expense to collect the tax.

Then what? The state will send Roanoke the tax proceeds, less certain fees. Tax authorities have not yet revealed those fees.

What will Roanoke do with the money? The state law that allows localities to charge the tax specifies that the money go toward environmental cleanup and education; efforts to reduce pollution; and reusable bags for WIC and SNAP participants. Roanoke bought 5,000 reusable bags for them and may need to order more.

Across the Roanoke and New River Valleys, the weather remains quiet this week, but the January storm cycle takes another run at Virginia this …

For the second time, a federal appeals court has revoked a permit issued by the U.S. Forest Service.

Mark Coleman, 61, has suffered from frontotemporal dementia for nearly the past five years. The emotional and financial toll on his wife, Janet, and their two grown children has been beyond wrenching. Now, an old friend from Cave Spring Junior High is trying to help out.

Some snow ahead, but massive impacts will miss Southwest Virginia

Early idea is for about an inch or two in the Roanoke Valley by the time the storm moves away late Saturday morning, with maybe a little more in the New River Valley.

Southwest Virginia will receive about six hours of light snow in the undercard. The main event will be in the northeast.

According to court documents, the defendant pointed and sprayed a chemical irritant at a line of police officers.

What follows is a story about an American dream that was not blocked, demolished or abandoned and the resulting generational prosperity that h…

Montgomery County and its towns wade through labor void

The issue is not exclusive to them and is reflective of the greater challenge many public and private sector employers across the country currently face with finding workers, said Blacksburg Town Manager Marc Verniel.

WH: We 'don't know' if Russians are playing games

WH: We 'don't know' if Russians are playing games