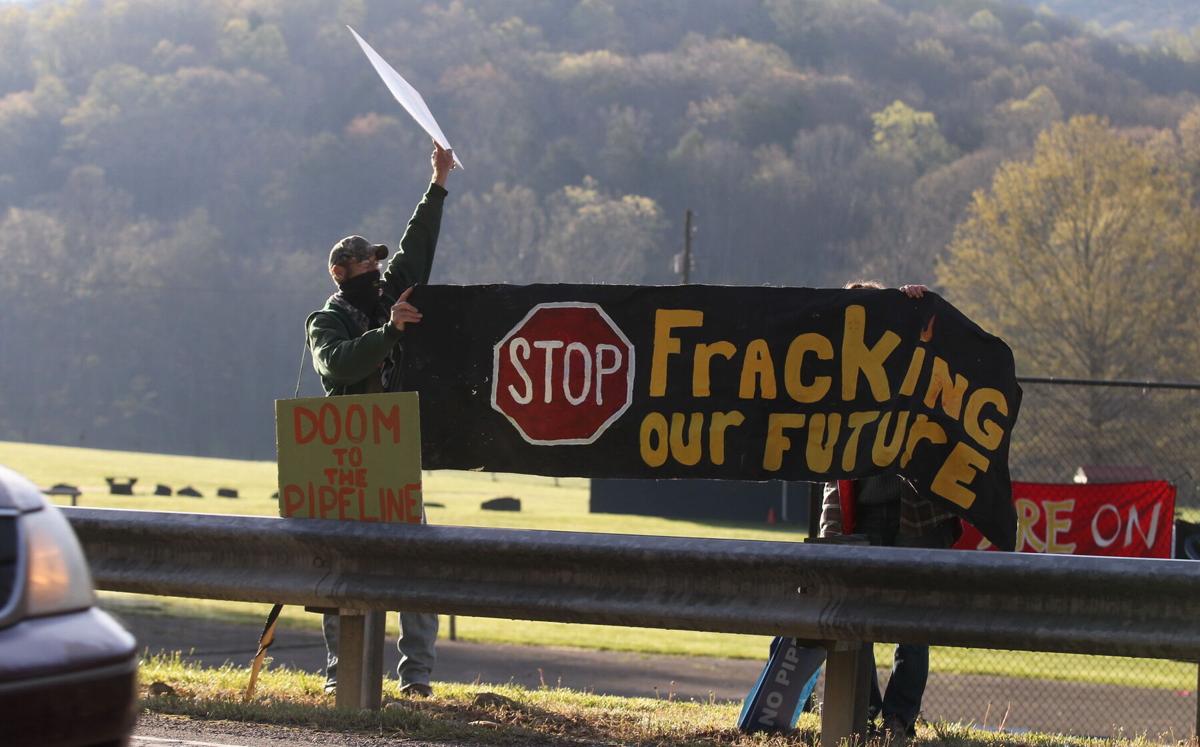 A group from Appalachians Against Pipelines gathered at the Newport Community Park on Tuesday morning, near where a protester had chained herself to Mountain Valley Pipeline construction equipment. 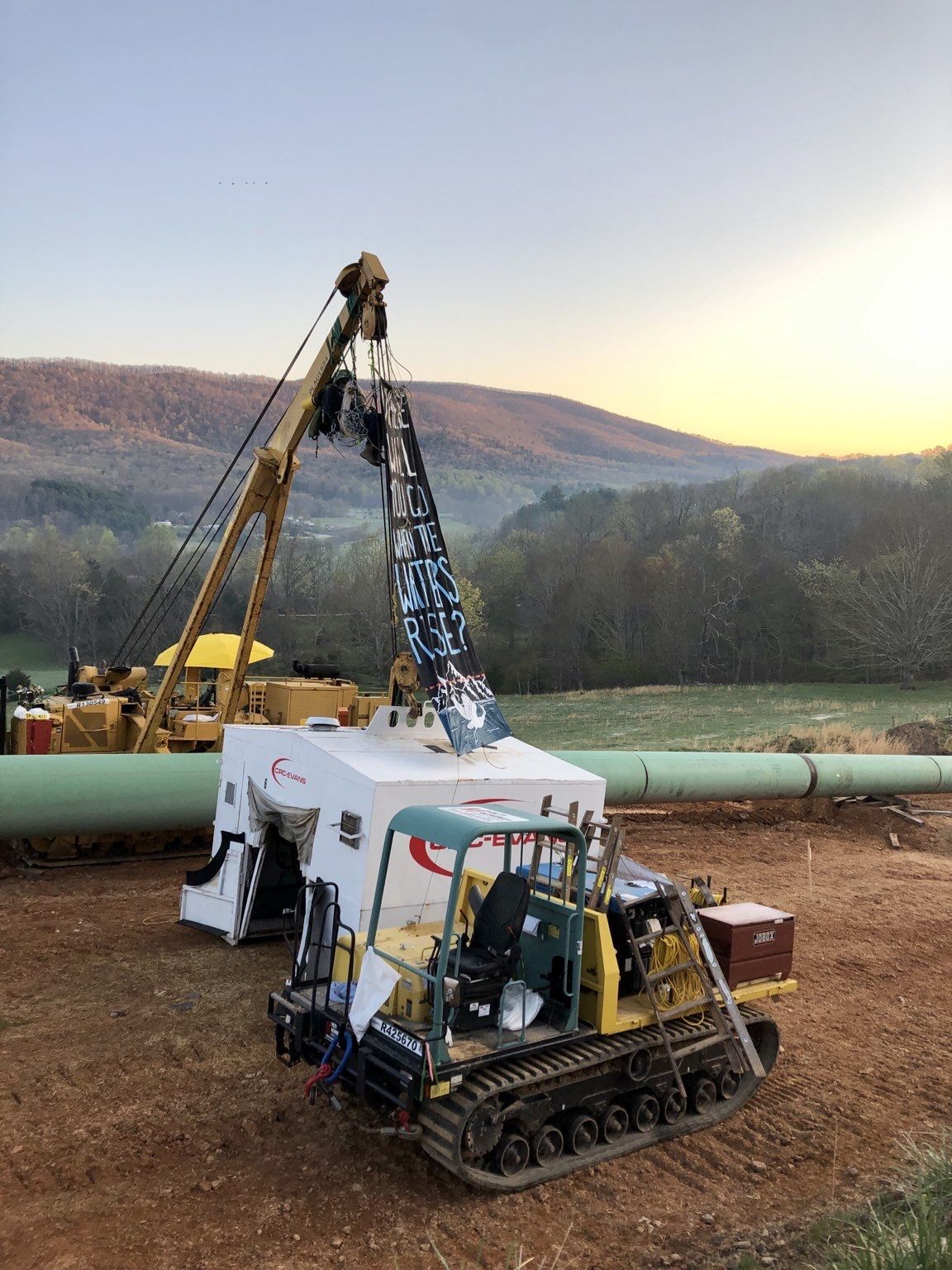 A protester chained herself to equipment at a Mountain Valley Pipeline construction site at Newport in Giles County. 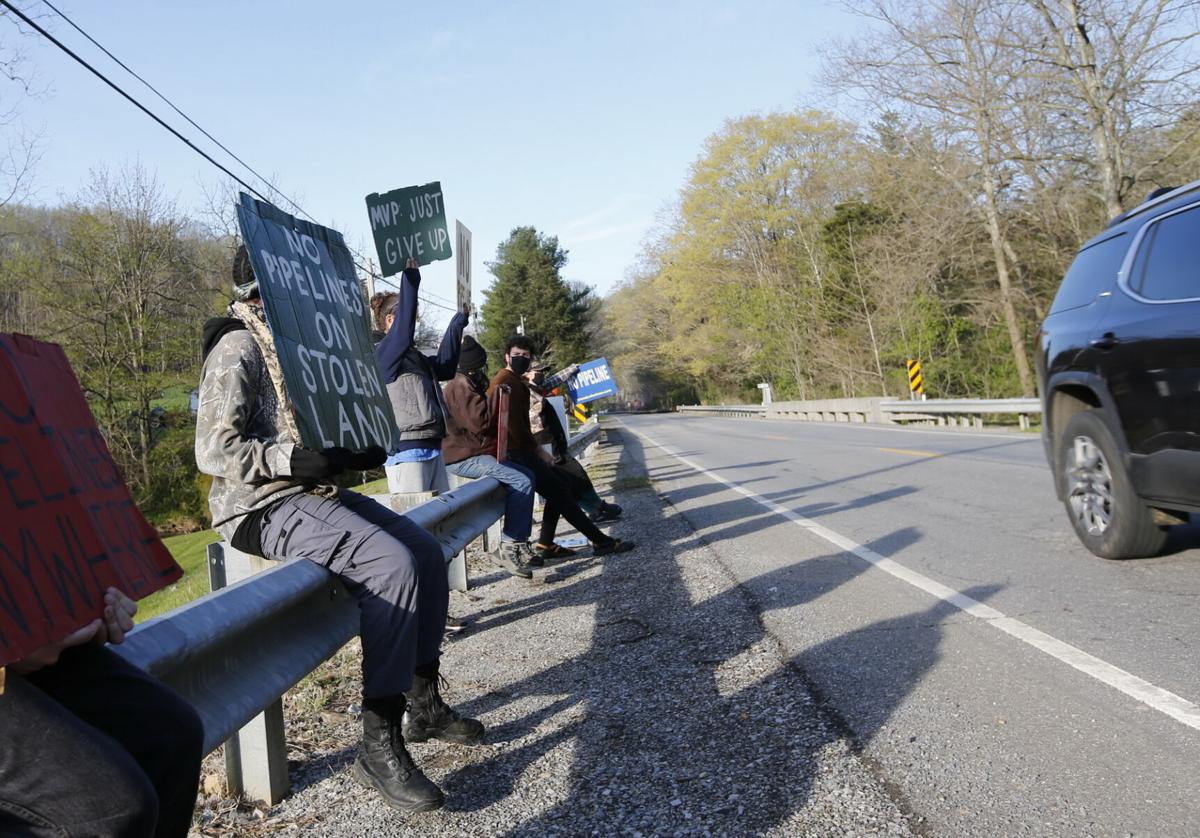 Drivers honk in support as they pass by Mountain Valley Pipeline protesters on Tuesday morning along Virginia 42 in Newport. 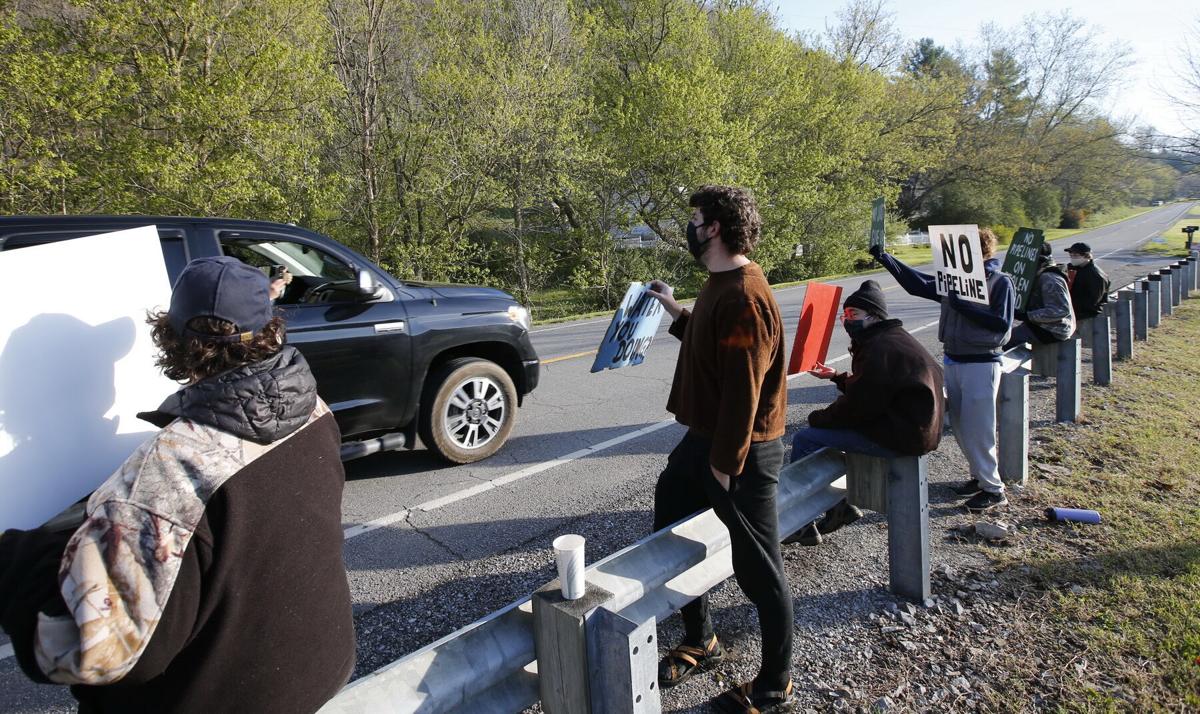 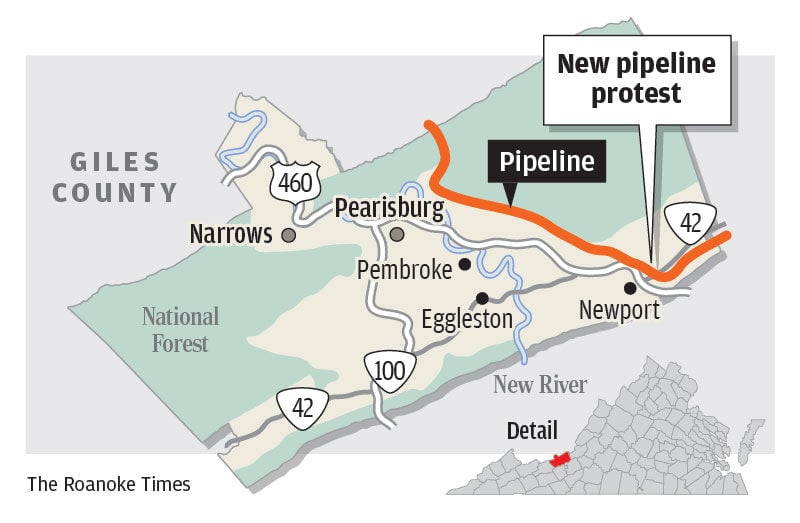 Alice Elliott, 27, of Ypsilanti, Michigan, spent about four hours suspended from a construction crane that had been left parked overnight in the pipeline’s right of way, while a crowd of supporters gathered nearby.

When authorities arrived shortly after 7 a.m., Elliott was positioned about 25 feet off the ground, said Corinne Geller, a spokeswoman for the Virginia State Police.

She slipped her arms into a “sleeping dragon” device, which kept her secured to the boom, Geller said. A team of specially trained officers dismantled the lock-box and brought her safely to the ground.

Elliott was charged with unauthorized use of the crane, damaging a vehicle, obstructing justice and interfering with the property rights of Mountain Valley. She was being held in lieu of a $1,000 bond Tuesday afternoon, according to Appalachians Against Pipelines.

“By locking myself to this equipment, I’m stopping MVP from using it and costing them tons of money, but this is just one form of resistance,” Elliott said in a statement from the group that urged action at all levels.

It was the latest in a series of human blockades of the natural gas pipeline since construction began in 2018. Protesters have sat in tree stands and chained themselves to heavy equipment and even a Mountain Valley helicopter in standoffs that usually lasted a day or less.

“THE FIGHT CONTINUES,” read a banner next to the exposed pipeline as it ran through a Giles County meadow, shown in a photo from Appalachians Against Pipelines.

Last month, two tree-sitters were removed from their perches in Montgomery County, ending after about two and a half years what was by far the longest continuing protest. Both are being held without bond pending hearings on criminal charges. They also are scheduled to appear in circuit court, where a judge in a civil case ordered them down last November.

A preliminary injunction was sought by Mountain Valley, which says the protests are delaying a project that will deliver needed natural gas to markets along the East Coast.

In recent months, much of the work on the section of a 303-mile pipeline that crosses through the New River and Roanoke valleys — on a route north of Blacksburg and south of Roanoke — has consisted of maintaining erosion and sediment control measures set up over the winter.

One exception was where the protest took place. Crews are clearing land, digging trenches and laying pipe on an 8-mile stretch west of Blacksburg, the State Water Control Board was told last week.

In the past, Mountain Valley has been cited repeatedly for allowing muddy runoff to wash away from construction zones.

But from last September through March, there were no cases on non-compliance with erosion and sediment control regulations, Melanie Davenport, director of water permitting for the Department of Environmental Quality, told the board.

Pipeline protesters have cited the project’s environmental impact, as well as its contribution to climate change and the loss of a number of key permits that were suspended after legal challenges.

Also Tuesday, a coalition of more than 60 environmental and conservation groups called on the Biden administration to order a stop to work.

“MVP’s construction impacts to date have already caused irreparable harm to landscapes and clean water — West Virginia and Virginia have assessed MVP more than $2 million in penalties for more than 350 environmental violations, mostly related to improper erosion control and stormwater management, and there are allegations of even more,” the groups wrote in a letter released by the Natural Resources Defense Council.

“Yet there is much more high-risk construction still planned.”

A group from Appalachians Against Pipelines gathered at the Newport Community Park on Tuesday morning, near where a protester had chained herself to Mountain Valley Pipeline construction equipment.

A protester chained herself to equipment at a Mountain Valley Pipeline construction site at Newport in Giles County.

Drivers honk in support as they pass by Mountain Valley Pipeline protesters on Tuesday morning along Virginia 42 in Newport.