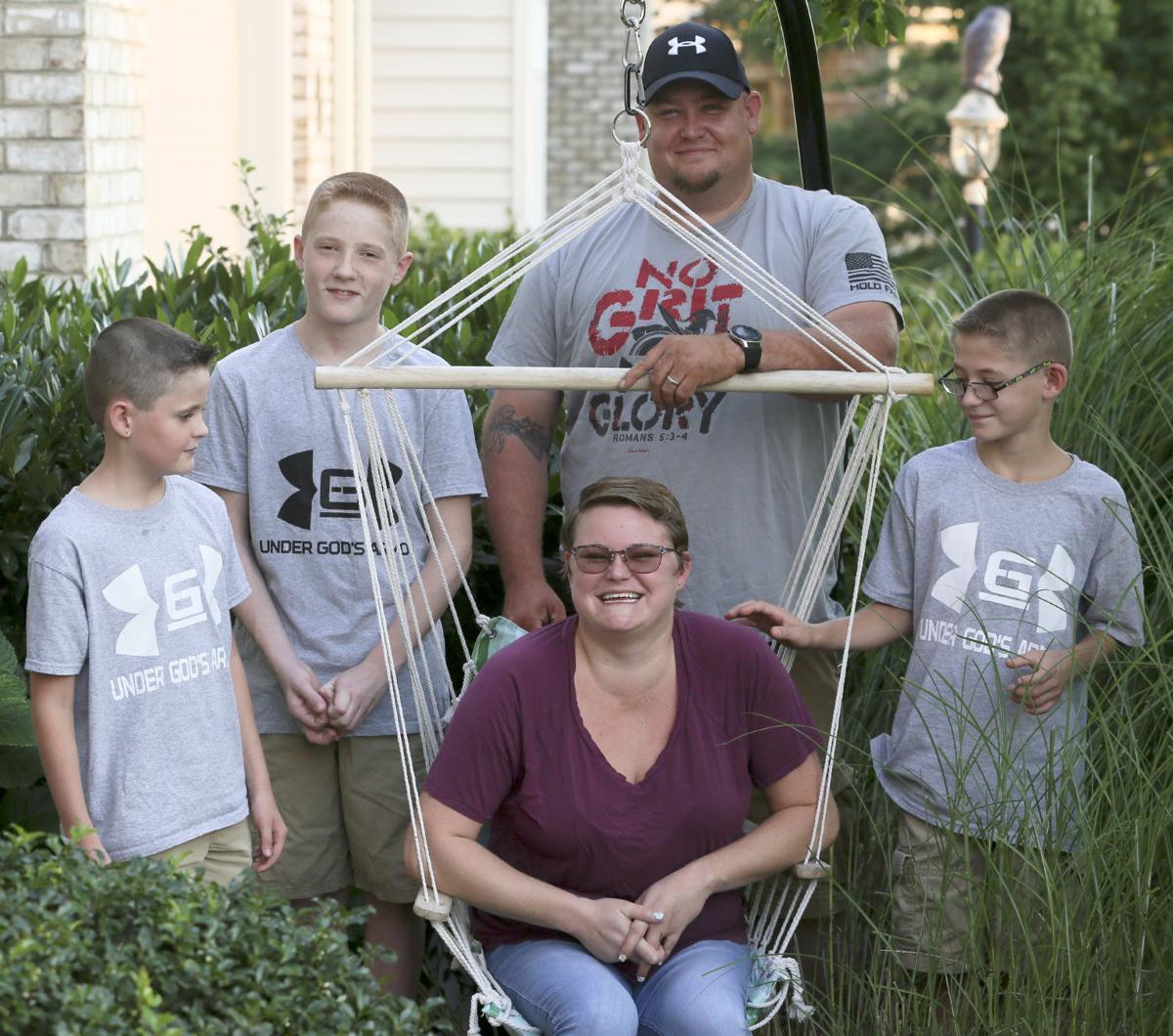 Lauren and Richard Warden pose with their three boys: Tanner (from left), 10; Alex, 13; and Stanley, 12. “I needed them more than they needed me, and that’s what kept me so positive and closer to God,” Lauren Warden said. 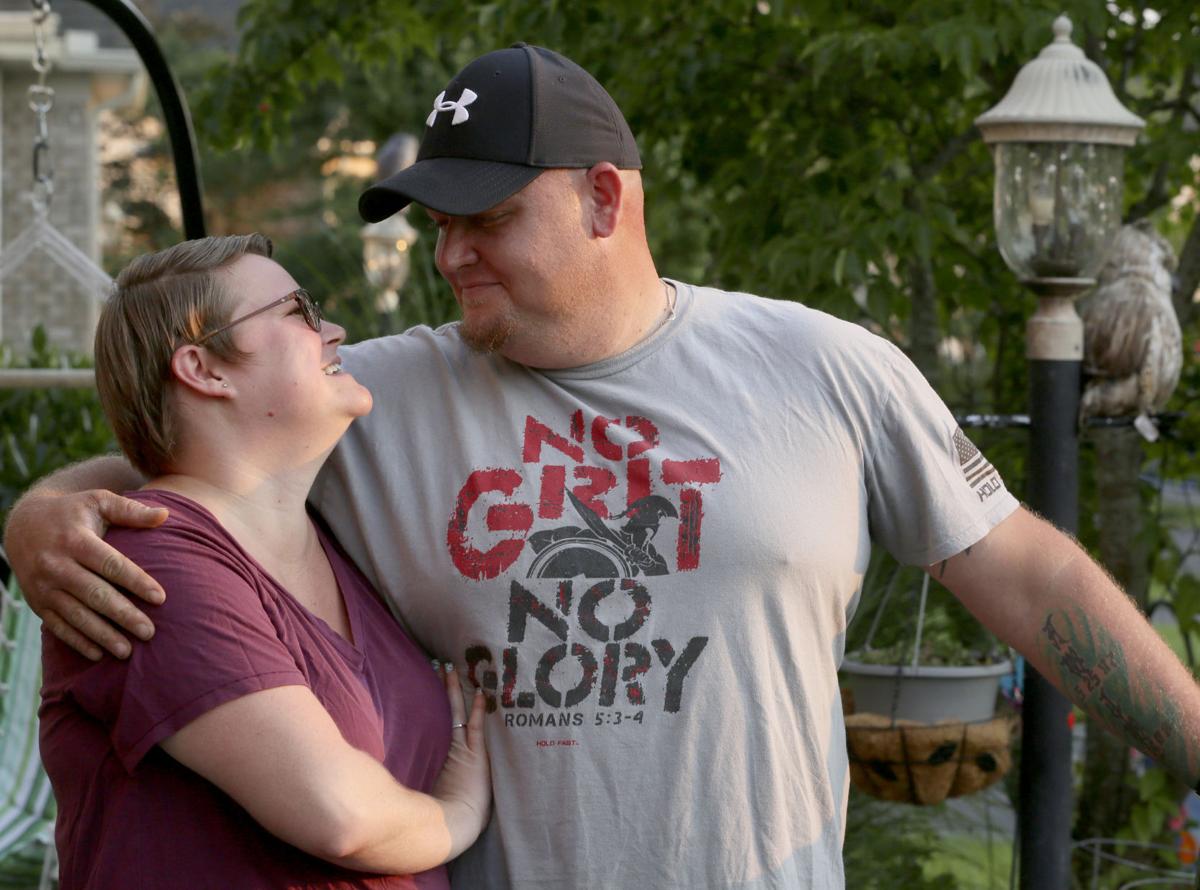 Lauren and Richard Warden and their family experienced extensive surgeries together which eventually alleviated the pressure on Lauren’s brain pain. 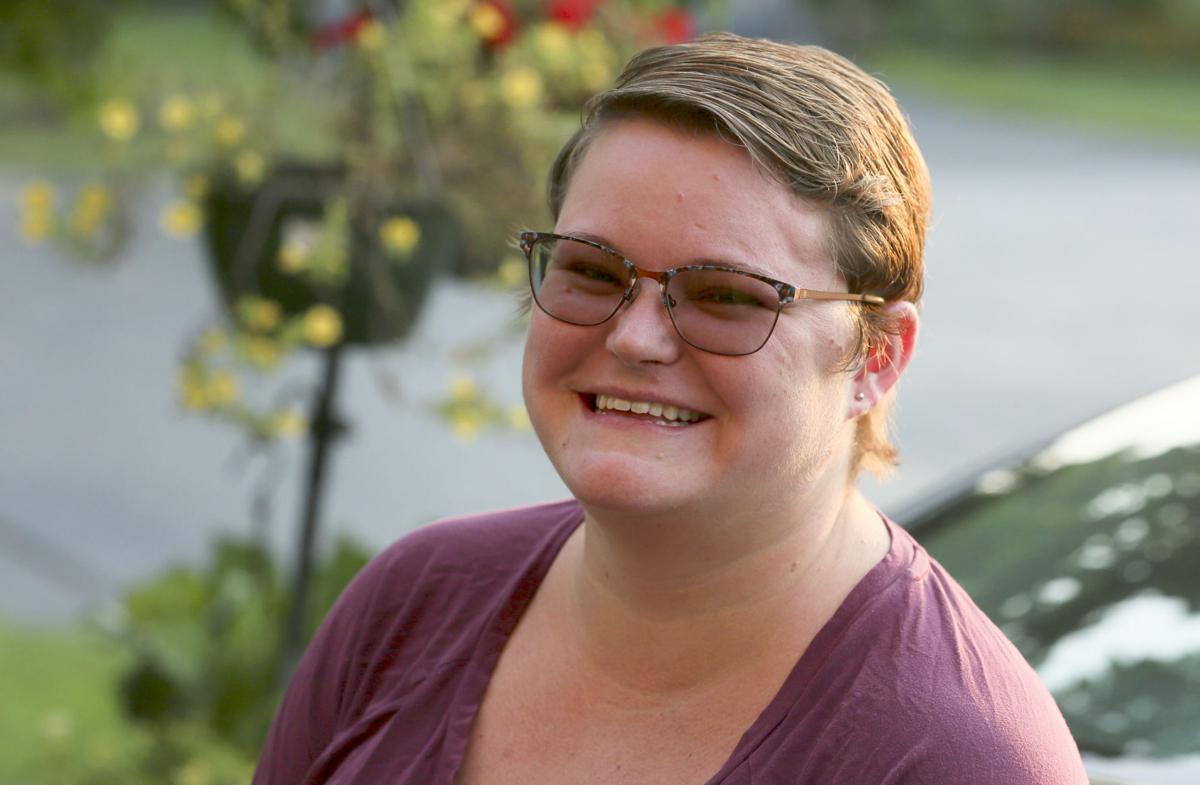 Lauren Warden underwent a cranial expansion, a rare treatment for a rare disorder. 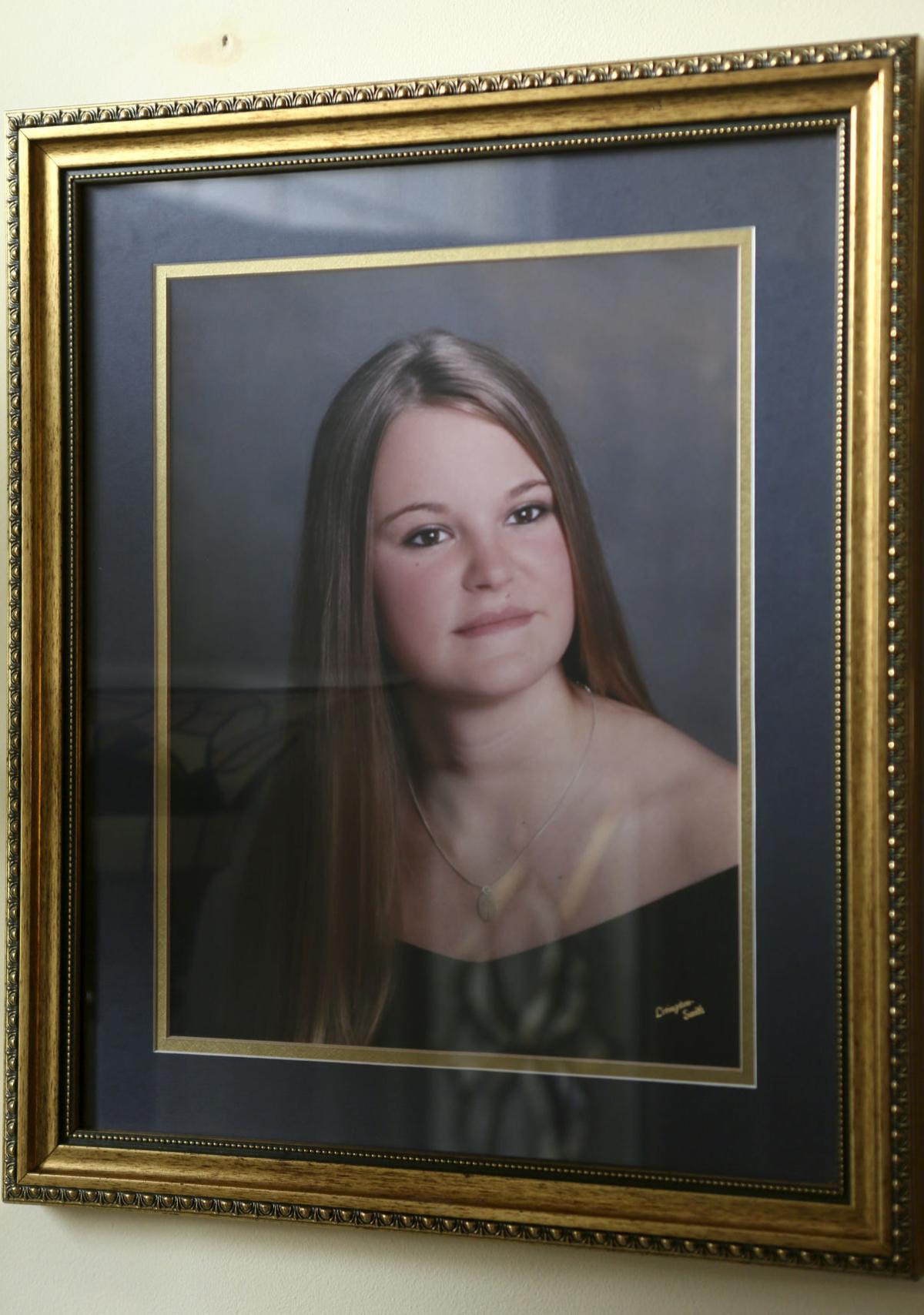 Scientists don’t know exactly what causes idiopathic intracranial hypertension. But women between the ages of 15 and 44 bear the brunt of the mysterious disorder. Yearly, about 4 out of 100,000 women are diagnosed. And three years ago, Lauren Warden was one of them.

FAIRLAWN — When Richard Warden walked into the hospital room and saw his wife, he said he knew instantly it was over. It was March 4.

“This time it was just different, and it stayed different,” Richard said. “She was smiling. After having major surgery, she was happy. It was a miracle.”

The years of suffering, the dimming vision and memory loss, the nine previous surgeries that failed to give relief and the big, frightening 10th procedure Lauren Warden had just survived — it had all led to this moment.

“There was no pain in my brain,” Lauren said. “When you live with pain, 24/7 for as long as you can remember, and then going from there [the operating room] and waking up six hours later, and it’s not there, you know that it’s over.”

In that time, Dr. Rashid Janjua of Novant Health in Winston-Salem, North Carolina, had removed much of the skull on the left side of Warden’s head and reformed it, adding material to create a bigger space for her brain.

The procedure relieved constant pressure that little by little was taking Lauren’s hearing, her sight, her memory and the person she’d always been.

Idiopathic intracranial hypertension — also known as pseudotumor cerebri — is rare. In the Western world, fewer than one in 100,000 people are diagnosed annually, according to a study published in 2014 in the International Journal of Ophthalmology and Clinical Research.

Sufferers experience severe, sometimes unremitting headaches, nausea and vomiting, altered vision and pulsating sounds in the head. And it can cause other problems, such as stiff neck, eye pain, memory and hearing loss and in severe cases, blindness.

Scientists don’t know exactly what causes it. But women between the ages of 15 and 44 bear the brunt of the mysterious disorder. Yearly, about 4 out of 100,000 women are diagnosed. And three years ago, Lauren was one of them.

“When I was first diagnosed, I was told it was very uncommon,” Warden said. “I had joined all these [support] groups. Well, it wasn’t uncommon. There are people I know that have it – people that live in Fairlawn or Draper, and Christiansburg and Radford.

“And a lot of doctors don’t understand pseudotumor, so to find one that does is amazing,” she said.

Janjua is one of those physicians. A neurosurgeon who takes regional referrals, he has many female IIH sufferers in his care.

“In my experience, these women have young kids, they have jobs. They are wives; they are mothers; they are daughters. And they keep on doing this, and by the time they come and see me, they are at wits’ end,” he said.

That was Lauren’s story, too.

The 31-year-old mother of three young boys thought it was just stress at first. After one of her three sons became gravely ill in 2017 and had to spend nearly two months in and out of hospitals, her head began to ache.

Her son recovered, but Lauren did not.

Still, she went on taking the boys to sports, taking care of the house and working as a long-term substitute elementary school teacher in Pulaski County. Slowly, the pain became more and more debilitating.

“When the pressure would get up, she would have to spend a lot of time in bed – not because she wanted to, but because she had no choice,” Richard said. “Every time she would try to attempt to do things. She would do more than she should have done just because she’s a good mom. But always it would end up taking control.”

Despite his long hours traveling as a DIRECTV installer, Richard would pick up the pieces she couldn’t handle, Lauren said. And so did Lauren’s mom, retired Pulaski County school administrator Elaine Woolwine.

Woolwine babysat the boys while Lauren and Richard went through surgery after surgery over the years. She loaned them money to help with deductibles and copays they struggled to meet.

“I’m just so thankful for her,” Lauren said of her mother.

But Lauren said there was never any choice but to keep going.

“There was no point that I was going to stop my life because I was sick. That wasn’t an option,” Lauren said. “I had kids, and I was responsible for my children.”

“I needed them more than they needed me, and that’s what kept me so positive and closer to God,” Lauren said. “They never stopped praying, even when I did. They were my strength. I tell them all the time, you’ll never know how much you got me through this.”

Many IIH patients get relief from less invasive treatments, from shunts to fluid drains to weight loss to medications, all of which can relieve pressure on the brain. But none of that worked for Lauren.

Her last option was a cranial expansion. It’s a rare treatment for a rare disorder. Janjua has done about one a year over the past three years, according to Novant Health spokesman Josh Jarman.

Janjua describes the procedure as akin to taking a tightly pinched hand out of a too-small glove and putting it into a bigger one.

Lasting several hours, the operation required him to remove about 80 percent of the left side of Lauren’s skull and reform it into a larger container for the brain.

It’s a big surgery, and requires many small procedures and tests leading up to it. In one of those procedures, a plastic surgeon places a tissue expander under her scalp to stretch the skin in readiness for a larger skull.

“I think Lauren is one of the bravest women I’ve seen,” Janjua said. “And we did all this, not just for Lauren but for Lauren’s husband and Lauren’s sons, too. They’re now at an age where they want their mom to be very active with them, and I wanted to give Lauren her life back.

“And I was very lucky to be able to work with her,” he said. “She’s absolutely fantastic.”

The morning after the surgery, Lauren took several laps around the intensive care unit and was sitting up in bed when Richard arrived. Despite the 65 sutures in her head and the black and blue circles around her swollen eyes, Lauren was ready to go home.

“I looked like death, but I felt great,” she said.

The couple left at mid-day and drove home to Pulaski County.

Since then, Lauren has regained her energy. She’s done a zipline and gone to the beach and plans to go deer hunting this fall – things she hadn’t done for years.

She’s also struggling with medical bills for both her son’s illness and her own. The family’s high deductible health plan has paid some of the cost, but the Wardens owe hundreds of thousands of dollars out of pocket, Lauren said.

“I’m sure we’ll have to claim medical bankruptcy after this,” she said. “As you know, the insurance companies are horrible, and I’m sure we’re not the only family going through this. And we’ll just do what we need to do, and God will be with us.”

Still, Lauren said, she is grateful to Novant Health and Janjua.

She’s gone on television news in North Carolina and given other media interviews to talk about her surgery and the relief it brought her.

Speaking out about her disease and her struggles is not something she ever expected to do. In fact, she said it freaks her out a little bit. But she wants other women who suffer from IIH to get the help they need.

“I didn’t do this for the attention, but just to help somebody,” Lauren said. “I want them to be fully aware that they have control of their health, and to fight and to never give up hope.”

Lauren and Richard Warden pose with their three boys: Tanner (from left), 10; Alex, 13; and Stanley, 12. “I needed them more than they needed me, and that’s what kept me so positive and closer to God,” Lauren Warden said.

Lauren and Richard Warden and their family experienced extensive surgeries together which eventually alleviated the pressure on Lauren’s brain pain.

Lauren Warden underwent a cranial expansion, a rare treatment for a rare disorder.

Scientists don’t know exactly what causes idiopathic intracranial hypertension. But women between the ages of 15 and 44 bear the brunt of the mysterious disorder. Yearly, about 4 out of 100,000 women are diagnosed. And three years ago, Lauren Warden was one of them.