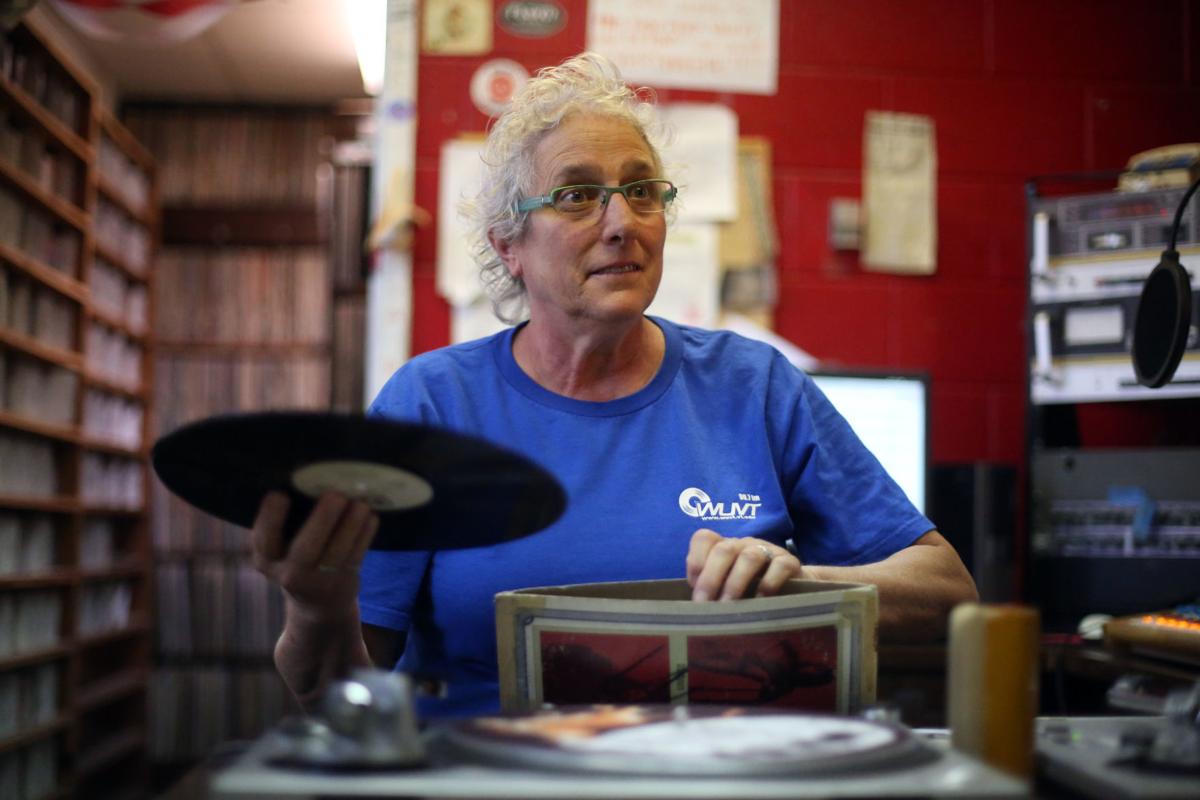 Linda DeVito sleeves an LP after playing it on one of WUVT’s turntables during her Monday morning “Winds of Change” radio show. 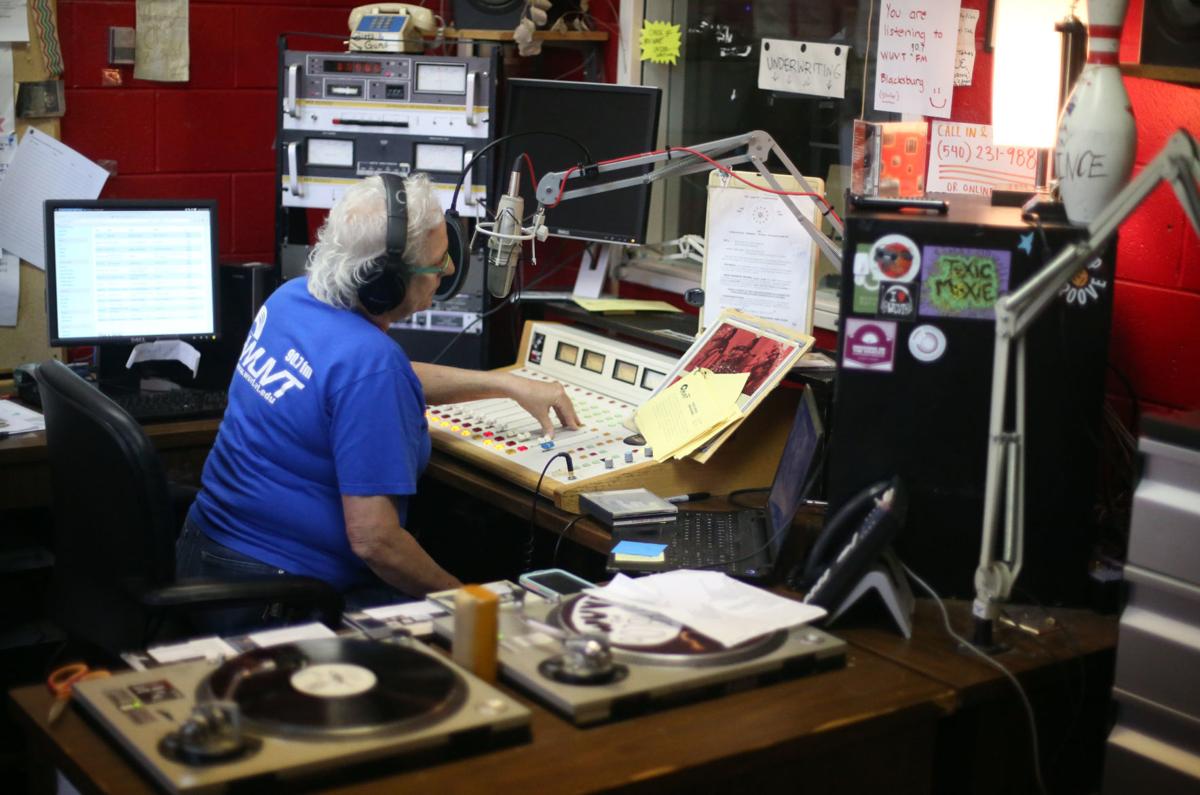 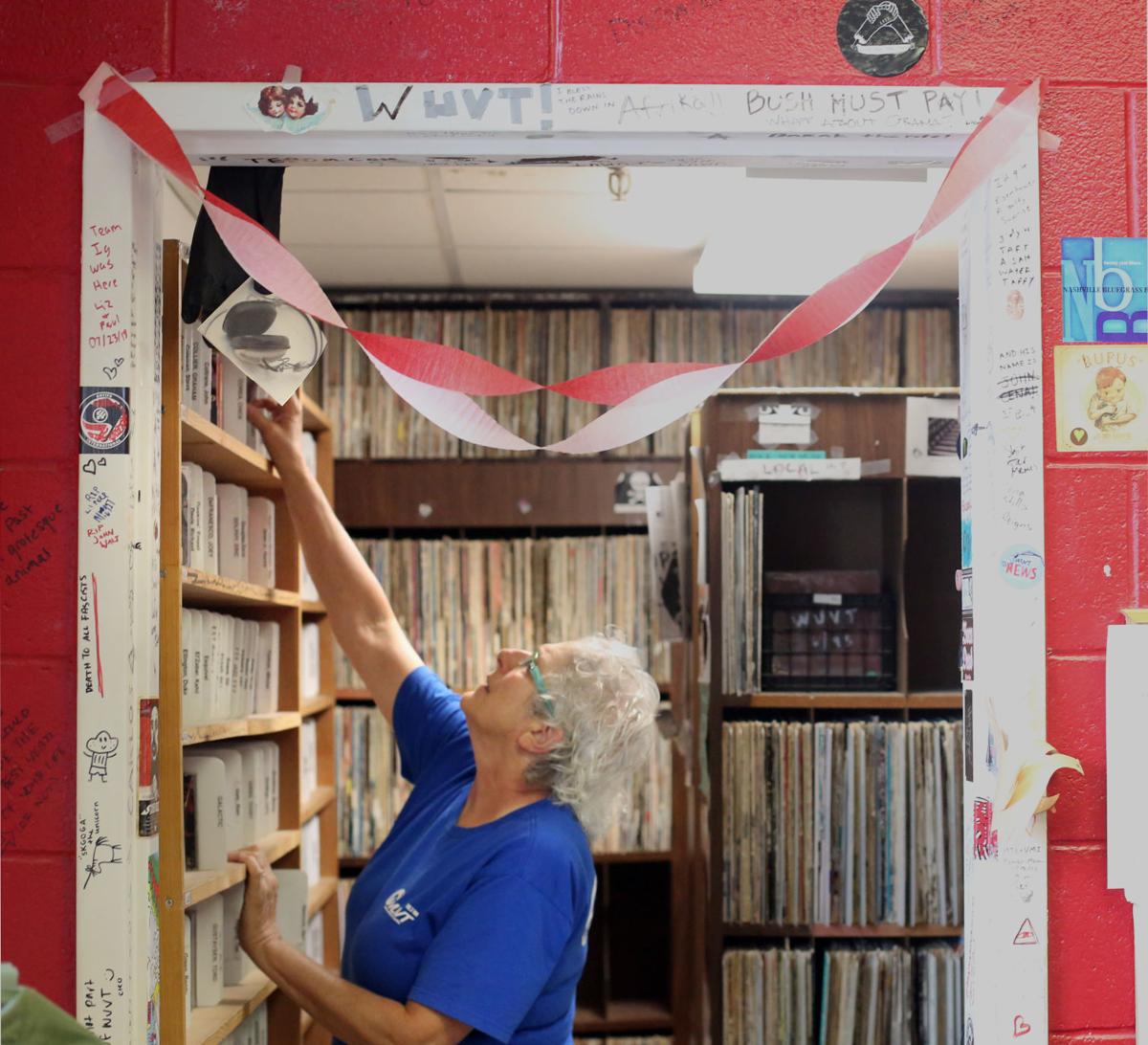 BLACKSBURG — It’s Monday morning at WUVT-FM radio station, and Linda DeVito (whose off-air name is Linda DeVito Kuchenbuch) is whirling around like a dervish, punching buttons on the radio board, delivering public service announcements, and prepping the turntable for an honest-to-goodness vinyl record. Then the phone rings.

“Parks and Recreation,” she answers, still fiddling with toggles on the sound board.

No, DeVito, former general manager and 41-year veteran of Virginia Tech’s independent radio station, is not losing her mind. As a member of the Floyd County Board of Supervisors, DeVito has volunteered to temporarily oversee the county parks and recreation department until a director is hired. This means she gets calls during her show about everything from wet playing fields to the time of volleyball practice.

“What’s the use of being stressed?” said DeVito, who was elected in 2015. “I am a public servant. I was elected to serve.”

DeVito, 61, wears a dizzying array of hats — eight of them by her estimation. WUVT is a habit she can’t quit.

“Let’s see — I’m a mom and my daughter is getting married in two weeks, a realtor, a Christmas tree farm co-owner, a supervisor/public servant, a disc jockey, radio personality and mentor, a special event planner, and primary caregiver for my 90-year-old mother,” she said.

DeVito became WUVT’s first female general manager in 1980-82, when women were decidedly in the minority at Virginia Tech. She brought her Long Island, New York, accent to the Blacksburg air waves in 1977.

“I came to Virginia Tech for its excellent forestry and wildlife program. I saw myself becoming a forest ranger at a state park,” she said. “But when I went to buy my textbooks at the campus bookstore, there was WUVT doing a live broadcast. There were wires running all over the place and heavy equipment — and music. I wanted in. I saw WUVT and my world changed.”

DeVito soon switched her major to communication studies. In 1978, she started the show she hosts today, “Winds of Change,” a genre-skipping smorgasbord of music with roots in the 1970s airing on Monday mornings.

As general manager, DeVito had to persuade the university not to shutter WUVT for a year during Squires Student Center’s renovation. Because WUVT must raise a large portion of its operating costs, she threw herself into fundraising, helping the station achieve two of its best years. (WUVT will run its 2018 fundraising radiothon Oct. 29- Nov. 4 to replace aging equipment.)

After graduation, DeVito married Skip Kuchenbuch, and together they started Maple Spring Christmas Tree Farm in Floyd County. She continued to host her show and mentor student disk jockeys. “Keeping my voice up” she calls it. But any observer can see DeVito loves playing music in what she calls “the penthouse suite” on Squires’ third floor.

“When we started the show there were only three other kids’ radio shows in the nation,” DeVito said. “We had staffers go home to get the records they listened to as children. Now we have a big collection of children’s music, probably more than any other station.”

When DeVito’s children got older, she passed the baton to other show hosts, training Julia Fallon most recently. DeVito focused her volunteer energies on her children’s school, coordinating volunteers at Floyd County High School, running the baseball concession stand, and videotaping Lady Buffalo basketball games. When the twins were in college, she ran for county supervisor of Floyd’s Little River district. She emphasized cooperation and adequate funding for schools and public safety.

DeVito never gave up the WUVT radio habit. She revived “Winds of Change,” doing on-air interviews with Ricky Skaggs, Sam Bush, Robyn Hitchcock and many others. DeVito invites students to sit in on her show and enjoys learning about new music.

“We are all big fans of Linda here,” said General Manager Josh Foelesch. “She’s a source of wisdom for the students who currently run the station. At the same time, she’s hands-off enough to allow the students to press forward with their own vision of what WUVT-FM should be. Linda has one of the most audience-friendly shows. She regularly interviews artists and holds contests.”

Along the way, DeVito has picked up another hat: weather guru. She’s trained as a weather observer with the National Weather Service and uses the social media and her show to give forecasts based on radar maps and meteorological analyses. She says people have praised her accuracy.

“I’m blessed to do all this,” DeVito said. “I’m a part of so many things that are important to me.”

DeVito’s show “Winds of Change” airs on WUVT at 90.7 FM. Listeners can pick up the show anytime through the station’s streaming site: www.wuvt.vt.edu.

Shannon Marie Winters was among 30 people charged in connection with bringing meth from Georgia to the New River Valley.

Linda DeVito sleeves an LP after playing it on one of WUVT’s turntables during her Monday morning “Winds of Change” radio show.