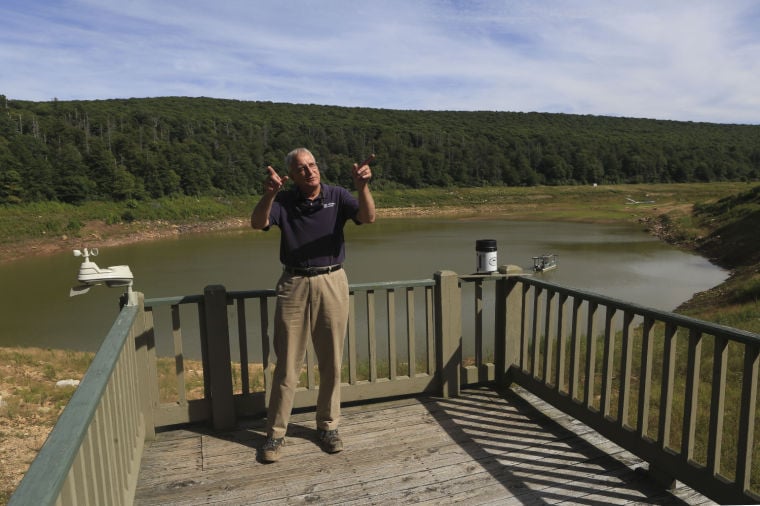 Standing between weather data-collecting instruments, Radford University engineering geologist Skip Watts points toward two live Web cameras that monitor the water levels of Mountain Lake. Scientists are fascinated by the lake’s pattern of filling up and drying out. 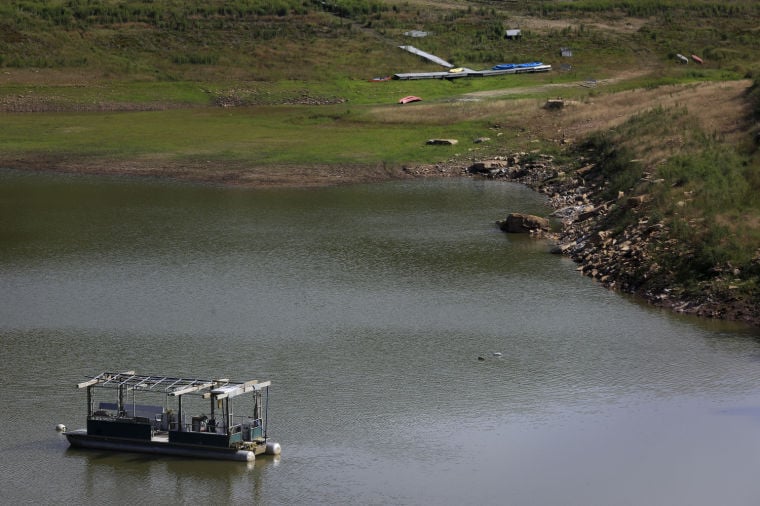 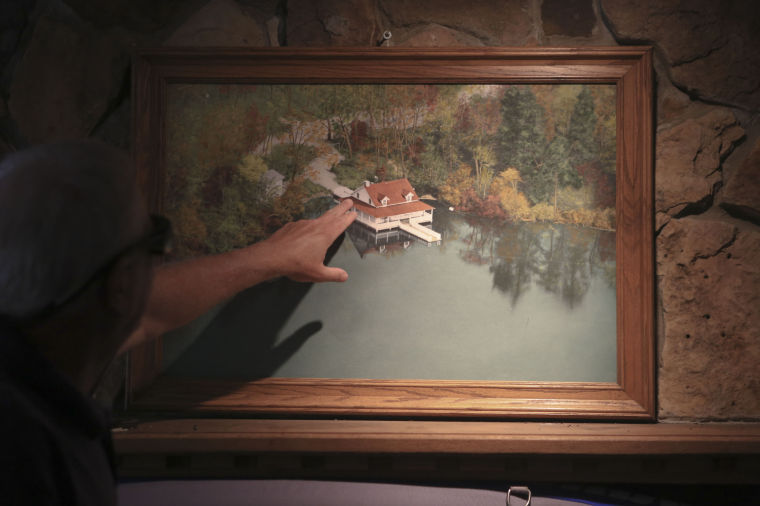 Radford University engineering geologist Skip Watts points at an old photograph of the Newport Cottage jutting out into a full pond at Mountain Lake. 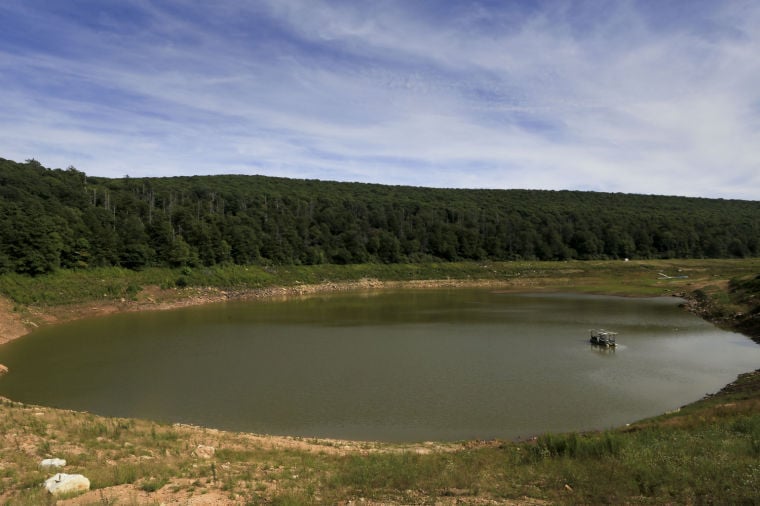 An effort to patch the bottom of Mountain Lake last year seemed to be working as water levels increased, but this summer an extended dry period slowed water intake, and researchers believe they have found another leaky area of the lake.

PEMBROKE — At Mountain Lake Lodge this summer, it’s a story of ups and downs.

After last year’s $2.25 million in renovations and improvements to the long-running resort atop Salt Pond Mountain, the finances are on the rebound. But after a promising start at refilling, the water level of the namesake lake the owners tried to fix last year dropped in July.

Lodge General Manager Heidi Stone said the lake receded so quickly last month that the staff had trouble keeping the guests informed of the changing water level. Watts said he estimated the rate of the leak at just under 1 million gallons a day.

Still, the renovations and new marketing strategies have made a difference to the bottom line, with August business up 30 percent over the same month last year, Stone said. And the resort’s Labor Day bookings are “packed,” she added.

So far this season, the resort has had 2,000 people booking stays, eating at the restaurant or paying day admission to the new Treetop Adventures zip line and ropes courses. That’s compared with 2,000 total customers last year, Stone said.

Although some guests have been disappointed that the lake remains little more than a large pond, “folks have been really great about it,” Stone said.

“Even without the lake, we’re blessed,” she said.

The lake level first dropped in 1999 but came back in 2003. In 2006, the water level dropped again. For three days in 2008, the lake dried up completely, leaving piles of rotting fish.

No living person had seen the lake disappear, although records from the 1700s describe a grassy meadow growing on at least part of the lake bed. It remained mostly empty from 2008 to 2012.

The drying up of the 50-acre lake was the most historically significant event in the resort’s history. It has drawn scientists from Radford, Virginia Tech, Purdue University and Kent State University to study it. But the low lake levels and the worst economic recession since the 1930s damaged the resort business.

In a short time, hotel occupancy dropped from about 60 percent to about 30 percent.

The Texas-based Mary Moody Northen Endowment, owner of the resort, began looking for ways to rebound. After consulting with the Urban Land Institute and hearing recommendations based on Watts’ findings, the endowment board re-branded the 1930s-era stone hotel as an outdoor adventure lodge and gourmet restaurant and bar. And the endowment embarked on a plan to stabilize the lake and bring it back to full pond.

To do that, the endowment hired local firms to carry out a major construction project to fill leaking depressions. One is estimated to have drained about 3 million gallons of a water a day out the bottom.

During the patching project, excavators pushed native stone and sediment into the lake, and added imported fine clay to mimic natural sedimentation — the same process that formed it 4,000 to 7,000 years ago. Strong geologic evidence recently found by researchers working with Watts suggests an earthquake — or perhaps more than one — caused landslides of enormous boulders and debris that filled in a gorge under present-day Newport Cottage. Eventually, the stream that cut the gorge deposited enough sediment to trap water behind the landslide to form one of Virginia’s two natural freshwater lakes.

But the fascinating geology of Mountain Lake — teased out by Watts and his teams using a remotely operated submarine and high-tech sonar, electric resistivity, seismic mapping and flow monitoring — is also its Achilles’ heel.

When surface water is abundant, the lake remains filled and the wet sediment layers keep the leaks in check, Watts said. But when something reduces the surface water going into the lake, piping holes present beneath the sediment drain the water away. Drought can set up a cycle in the lake in which the sediments dry out and make the bottom more porous.

After the bottom leaks were patched last year, water levels began rising. At the beginning of this season, the lake was about 45 feet high at its deepest part, Stone said.

But as the water rounded the bend in sight of the resort’s iconic gazebo in July, dry weather set in. The lake began to drop, and Watts’ team discovered another leak at a higher elevation just to the west of Newport Cottage.

Watts said he estimated the rate of the leak at just under 1 million gallons a day.

Watts said that even before the dry weather set in, the refilling process had stalled at a level near the new hole. He said he thinks that leak may prevent the lake from refilling completely, particularly if extended dry periods continue.

With the wet weather in August, the water level is beginning to rise again, Watts added.

Compared to the leaks found in the bottom — one of which created such a strong current that the team’s scuba diver kept his distance — this newly discovered hole is small, Watts said.

“With less rainfall, even a small leak is more serious now than it would have been in the ’90s and early 2000s,” Watts said.

Patching the bottom did work, however, Watts said. Intensive scientific monitoring has found no leaks there now, and a large pond remains atop the patched area. Patching other leaks as they emerge would likely help, too, Watts said.

But that may not be the best solution, for more than one reason.

“We are still a not-for-profit. We have to sustain ourselves,” Stone said. “We don’t have an endless pot of money. We can’t play whack-a-hole.”

Watts and other researchers are thinking about the problem in a new way, too.

“We’ve focused so long on where the water is going, we’ve not been paying enough attention to where it comes from,” Watts said.

He and Roanoke College environmental studies professor Jon Cawley and their students have already started a new line of inquiry. Together they will research how watershed changes and storm water management may be affecting the flow of water into the lake, Watts said.

Cawley has a long history of research at the lake, going back to his days as a graduate student at Virginia Tech.

Some preliminary work has pointed to at least one area where much-need moisture has been diverted away from lake, Watts said.

If a cost-effective way to return more water to

the lake can be found, perhaps then the leaks will be of interest only to scientists.

CASEY: Readers write about ‘personal responsibility’ and the unvaccinated

A reader asked, "Have you considered writing about the cost taxpayers are bearing for the medical care of folks who have been offered a free COVID vaccine but refuse to get one?" I did soon as I read her email.

Documents filed in the U.S. District Court for the District of Columbia offer no details about what the proposed deal might entail.

Dulles manager to be director of Roanoke-Blacksburg Regional Airport

Mike Stewart has worked for numerous airports and airlines, including a stop in Roanoke earlier in his career.

Standing between weather data-collecting instruments, Radford University engineering geologist Skip Watts points toward two live Web cameras that monitor the water levels of Mountain Lake. Scientists are fascinated by the lake’s pattern of filling up and drying out.

Radford University engineering geologist Skip Watts points at an old photograph of the Newport Cottage jutting out into a full pond at Mountain Lake.

An effort to patch the bottom of Mountain Lake last year seemed to be working as water levels increased, but this summer an extended dry period slowed water intake, and researchers believe they have found another leaky area of the lake.