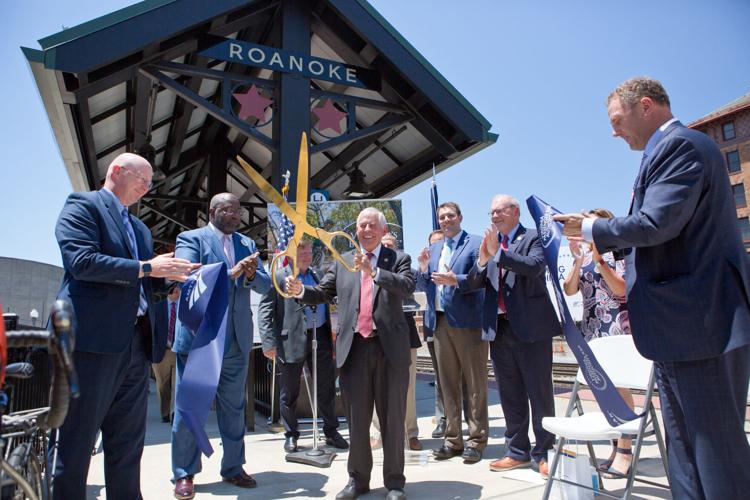 State Sen. John Edwards cuts a ribbon during a ceremony celebrating the expansion of Amtrak Northeast Regional service to and from Roanoke. 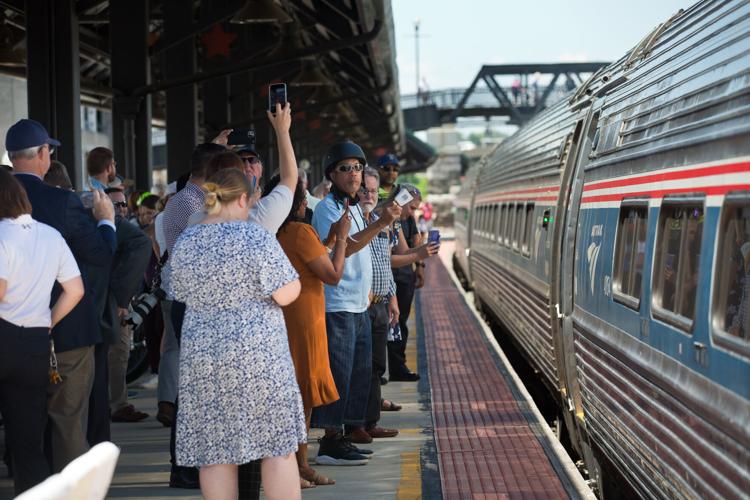 People greet the first train in the expansion of Amtrak Northeast Regional service to and from Roanoke. 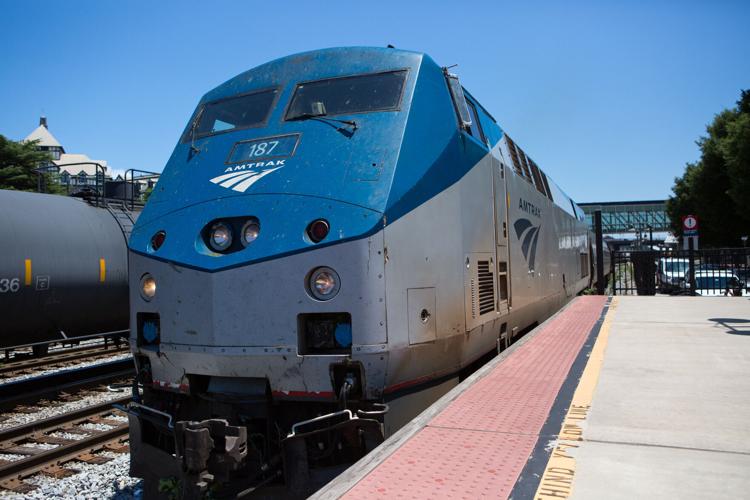 The first train in the expansion of Amtrak Northeast Regional service to and from Roanoke arrives at the downtown platform Monday, July 11, 2022, in Roanoke. 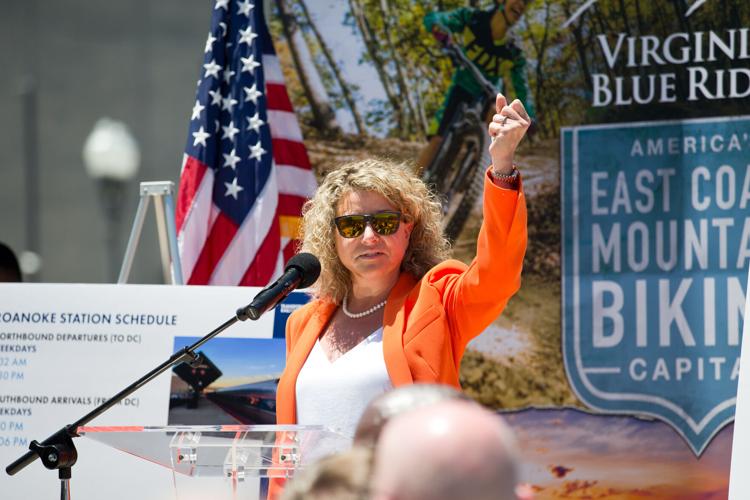 July 12, 2022, 10 p.m.: This article has been updated to add the times of the second Amtrak train's arrival to and departure from Roanoke in the afternoon.

Amtrak’s midday train to Roanoke entered the station for the first time Monday before a crowd of enthusiastic onlookers.

With two Amtrak trains now serving the city daily, one transportation official predicted that local ridership will at least double to 10,000 monthly trips within a few years.

For indication of the current level of ridership, with one train in service, April data is instructive. During that month, a combined 2,859 passengers left Roanoke on the single, daily outbound Amtrak train and 2,782 riders arrived in Roanoke on the daily incoming train, according to spokeswoman Gerica Goodman with the Virginia Passenger Rail Authority. That’s more than 5,600 total trips, counting each leg.

Monday afternoon, Amtrak began operation of Roanoke’s long-sought second daily train, with convenient daytime service. The second train arrives in Roanoke at 1 p.m. and departs at 4:30 p.m. The head of the state authority told a crowd of people who witnessed its arrival what to expect.

“If you double the frequency, you will more than double the ridership,” DJ Stadtler said.

Off stage, Stadtler said it will take a couple of years — certainly fewer than five — for the doubling to occur, given national trends.

“That’s what the passenger industry in North America has seen,” he said.

Folks in the regional tourist trade like the sound of that.

“It is our intent to keep both of these trains full of visitors coming to Virginia,” said Landon Howard, president of Visit Virginia’s Blue Ridge.

Jeff Mann, an Amtrak senior executive, reminded the crowd that the the service extension to Roanoke, which occurred in 2017, is part of one of Amtrak’s most successful ventures.

City officials plan to establish an Amtrak waiting room in a building adjacent to the platform, but not until 2026. There is no ticket booth, either. Amtrak sells tickets online.

Rail service has largely returned to pre-pandemic levels. The train service connecting Roanoke and Washington, D.C., known as Route 46, posted a ridership of 19,605 total trips in April or about 600 more than in April 2019.

Norfolk Southern, which owns the track used by Amtrak, also endorsed the project. Jackie Corletto, the company’s assistant vice president of strategic planning, said the railroad is “thrilled” by Amtrak’s results and sees the partnership as a model for how to launch and operate intercity passenger rail. It was done in a way that meets the needs of both freight shipping and passenger travel, she said.

Mass transit is a force for change in downtown. As rail advocates spoke into a public address system, heavy equipment noisily tore down the last of the former Valley Metro bus station across the street from the gathering. A new bus station is under construction on a nearby lot.

A Vinton man threatened to kill local government officials on July 21, and an emergency substantial risk order was filed against him the next day. He surrendered four handguns and a shotgun to law enforcement.

Leader of Roanoke street gang sentenced to 37 years in prison

Sean "Denk" Guerrant was the leader of the Rollin' 30s Crips, which was responsible for the murders of two young men.

“The defendant’s conduct served only to advance the mob’s progress toward the building,” prosecutors wrote. Thomas "T.J." Robertson had no comment to the judge before he was led away in chains.

One suspect was taken into custody early Friday morning. Police believe there are no additional suspects and there is no current danger to the community.

An attempt to legislate which federal court will decide challenges to the Mountain Valley Pipeline, included in the Inflation Reduction Act to secure the centrist senator's support, does not necessarily mean the project will overcome its many legal obstacles.

A couple of interesting economic development initiatives are taking shape in Carroll and Grayson counties. The unsexy one is for a regional slaughterhouse that would give farmers much easier access to marketing their livestock. The other, which sounds like science fiction, could create biosecure farms where disease-free animals are raised for their organs, for future transplantation into humans.

A 'catastrophe' if Ukrainian power plant attacked, according to President Zelensky

A 'catastrophe' if Ukrainian power plant attacked, according to President Zelensky

State Sen. John Edwards cuts a ribbon during a ceremony celebrating the expansion of Amtrak Northeast Regional service to and from Roanoke.

People greet the first train in the expansion of Amtrak Northeast Regional service to and from Roanoke.

The first train in the expansion of Amtrak Northeast Regional service to and from Roanoke arrives at the downtown platform Monday, July 11, 2022, in Roanoke.