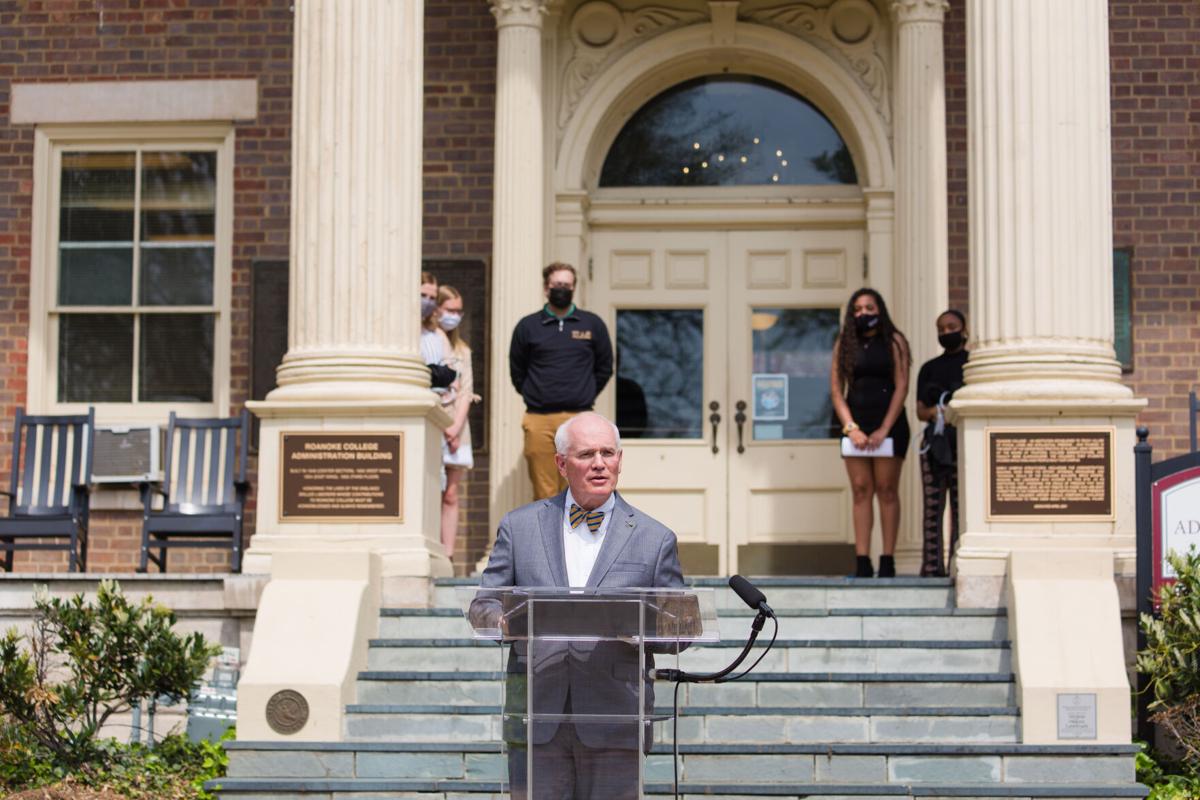 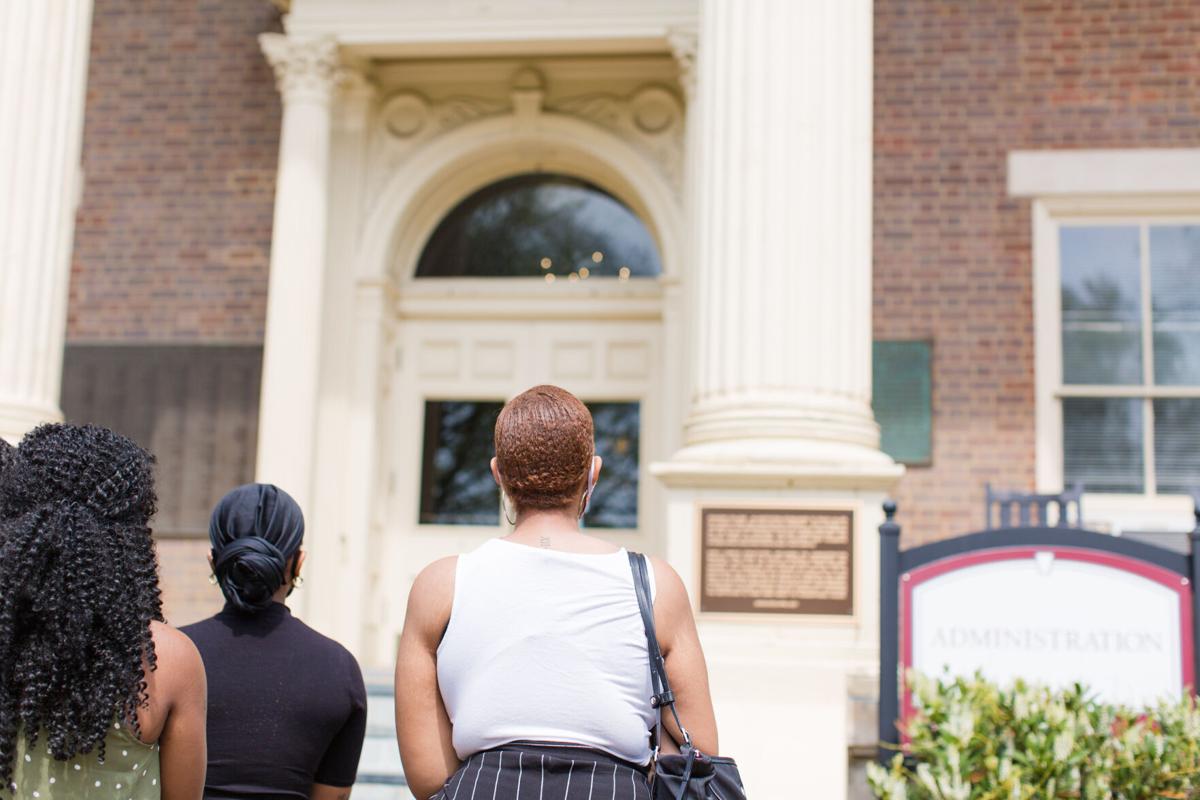 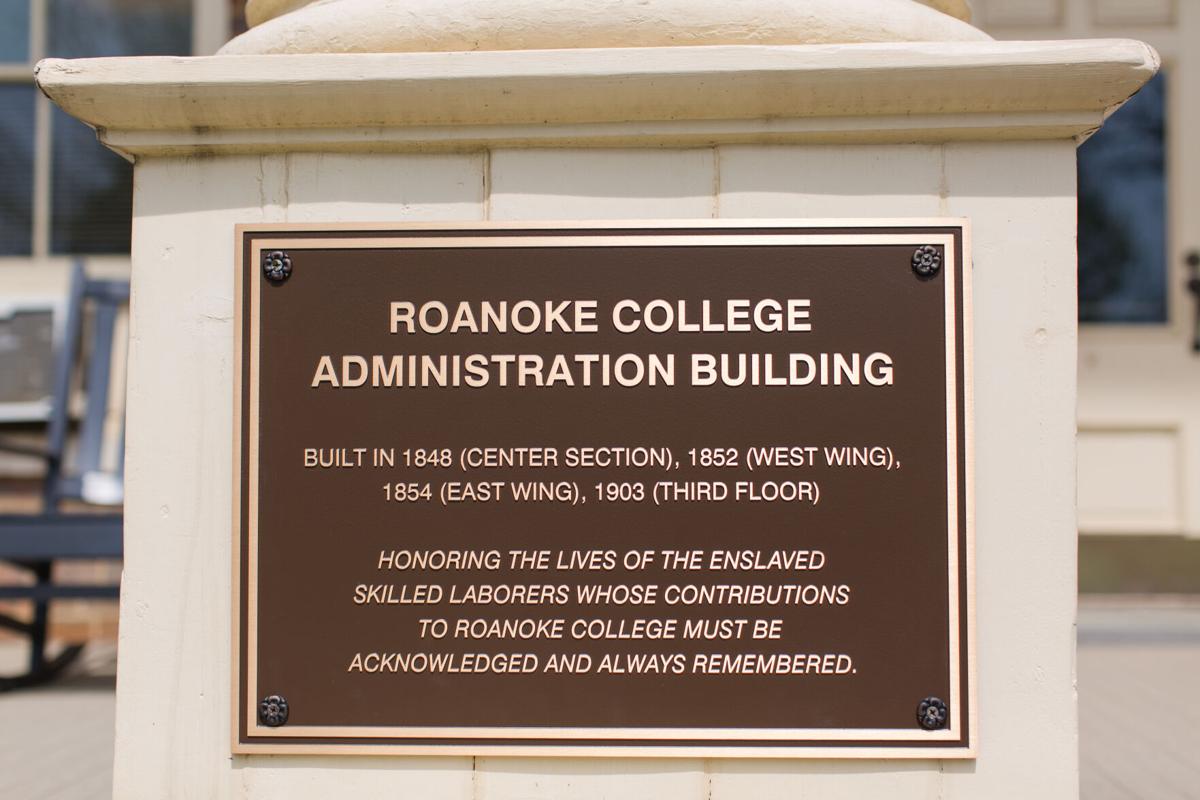 A closeup of one of the plaques with some of the Roanoke College administration building's history. 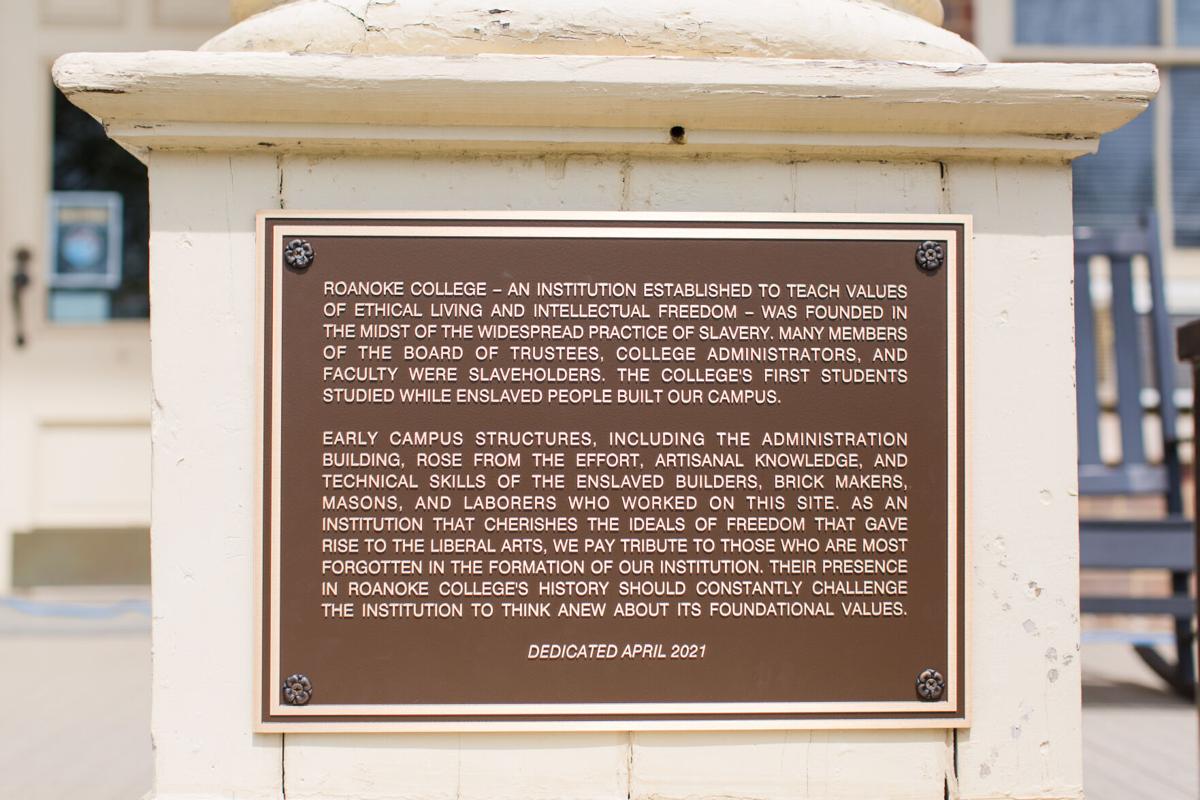 A plaque remembering the enslaved people who helped in the building and early years of operation of Roanoke College in Salem.

Plaques honoring enslaved people whose skilled labor helped found Roanoke College were affixed to the steadfast pillars they built more than 170 years ago, during a ceremony Thursday acknowledging their contributions to campus.

At least three slaves, Baldwin Simms and brothers Peyton and Charles Lewis, are known to have labored as brick masons on the Roanoke College Administration Building during its construction in 1848. The names and number of other enslaved people involved is so far undetermined as research continues.

“Those same enslaved workers and thousands of others like them helped to create the wealth that benefited this region in this part of the state and our local community,” Maxey said. “It’s a reminder to us — for us — of our founding in an economic system that exploited the enslaved, how those were intertwined.”

Indeed, the growth and history of Roanoke College is intertwined with that of the surrounding Roanoke Valley, said Jesse Bucher, associate professor of history at the college and director of its Center for Studying Structures of Race, responsible for researching the role of slaves in campus’ construction.

“The college is fully enmeshed in the regional economy, which was a slave economy,” Bucher said Thursday. “We read those names today, because those are the ones that we can verify with accuracy.”

In researching the pre-Civil War history of Roanoke College, Bucher said he and his students learned that much of the school’s early leadership — doctors, lawyers and farming landowners of the valley among them — enslaved people. Some trustees owned one or two people, while others owned as many as 80, Bucher said.

“For our college, and really for any college anywhere, one of the things that you see is that a board of trustees is comprised of local elites,” Bucher said. For Roanoke College trustees, “about half of those members in the 19th century owned slaves at varying levels.”

Some names of slaves who labored at Roanoke College — and in the surrounding valley — are undoubtedly lost to time, but acknowledgement of the past is key to understanding a region, state and nation’s full history, Bucher said.

“There was wealth, labor power and artisanal abilities of these enslaved people that existed, that we need to recognize existed, even if there’s not a golden document saying, ‘yes, here’s proof that happened,’” Bucher said. “We know that was what was going on, because it was so widespread.”

Finding the names of the Lewis brothers and Simms required genealogical research of the mid-1800s, a time period that is difficult to study due to sparse records, Bucher said. Studies continue at Roanoke College to learn more about local daily life in the 19th century.

“There’s a lot of really great local historians, and we’re always happy to connect with them. We’re really interested in meeting people in the valley that are genealogists, doing research or know things about their families from that time period,” Bucher said. “Some of this kind of stuff is available in archives, but sometimes it’s not. Sometimes it’s just family records.”

A limited crowd of students, faculty and staff gathered outside the Roanoke College Administration Building to witness the ceremony. Student Jordan Robinson spoke on behalf of the college’s Black Student Alliance.

“We would like to thank the college for beginning their journey on recognition of the slave history present on this campus,” Robinson said. “These are mere steps in order to rectify and acknowledge that without the work of these enslaved individuals, our college cannot afford buildings of this caliber that have continued to stand through over 170 years of wear and tear.”

Thursday’s event in Salem was part of an effort by colleges and universities across Virginia, notably including Washington and Lee University and the University of Virginia, and elsewhere to recognize the role that slavery and enslaved people played in the institutions’ history.

The placard dedication Thursday comes during the 156th anniversary of Virginia’s emancipation week, news of which crept across the state at the end of the Civil War in April 1865. The goal of the brown and gold plaques and the project that created them is to produce more history, Bucher said:

“What we’ve concluded is that if we do more research on the history of Roanoke College’s relationship with slavery, what we’re really starting to unpack is a relationship that’s reflective of the broader Roanoke Valley.”

The victim of a fatal weekend crash has been identified as a 57-year-old man from Roanoke, according to the Roanoke Police Department.

To figure out why some people are COVID vaccination-averse, a team of Virginia Tech researchers set out to determine if misinformation shared on social media fuels that resistance.

A grant of $175,000 could be used to purchase the last remaining piece of private land along the reservoir's shoreline.

More than 300 homes and 26 home-based businesses in the Windsor Hills, Cave Spring and Catawba districts have been identified to receive internet access in the next two years.

A closeup of one of the plaques with some of the Roanoke College administration building's history.

A plaque remembering the enslaved people who helped in the building and early years of operation of Roanoke College in Salem.