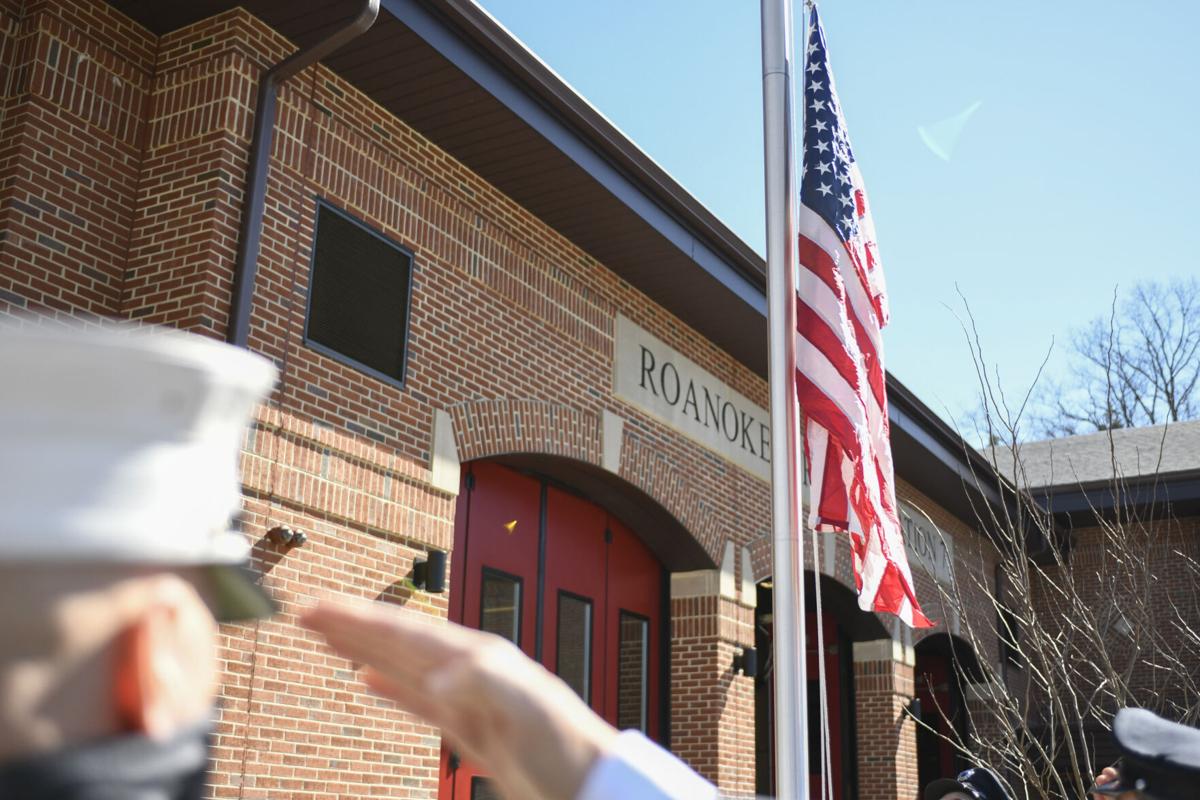 According to tradition, the flag cannot be raised over a fire station before it is dedicated. With the grand opening and ribbon-cutting for Station No. 7 in Roanoke, the colors were raised over the Memorial Avenue facility. 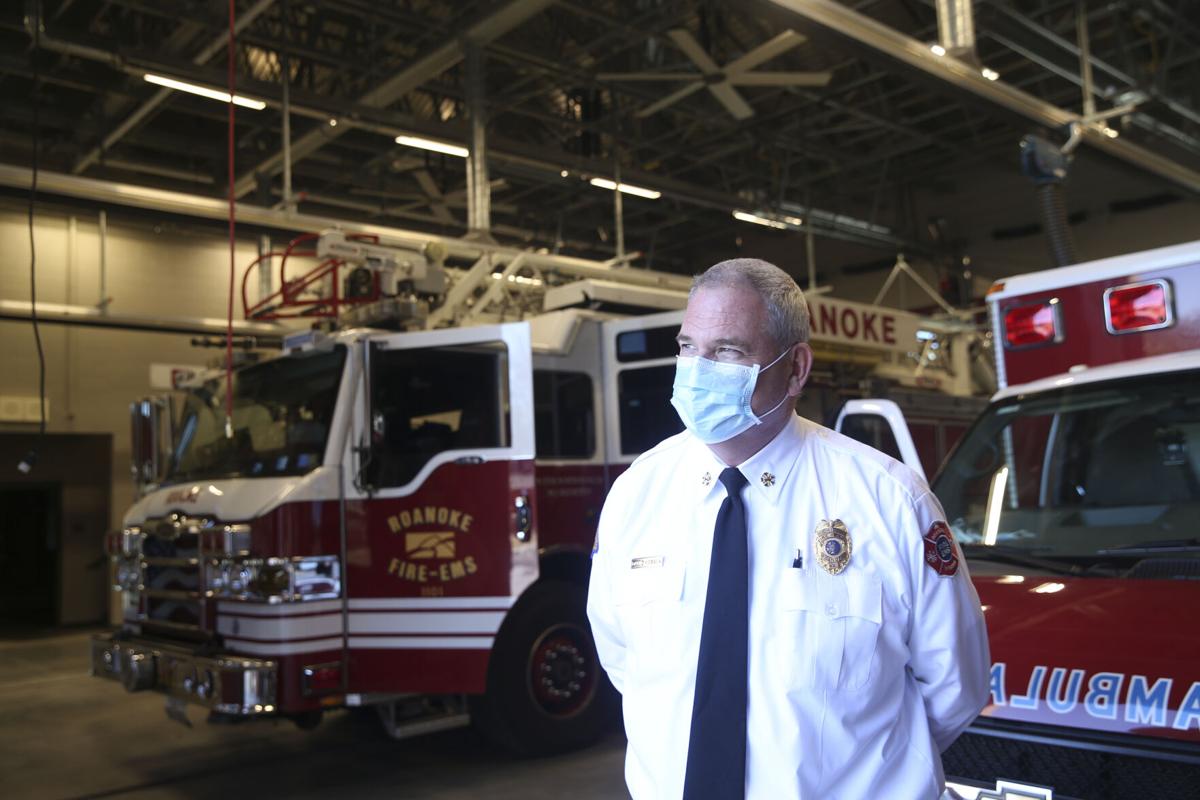 Fire EMS Chief David Hoback stands in the new apparatus bay of the new Roanoke Fire-EMS Station No. 7, where he says larger modern ladder fire trucks can fit. The modern fire trucks could not fit in the old fire station. 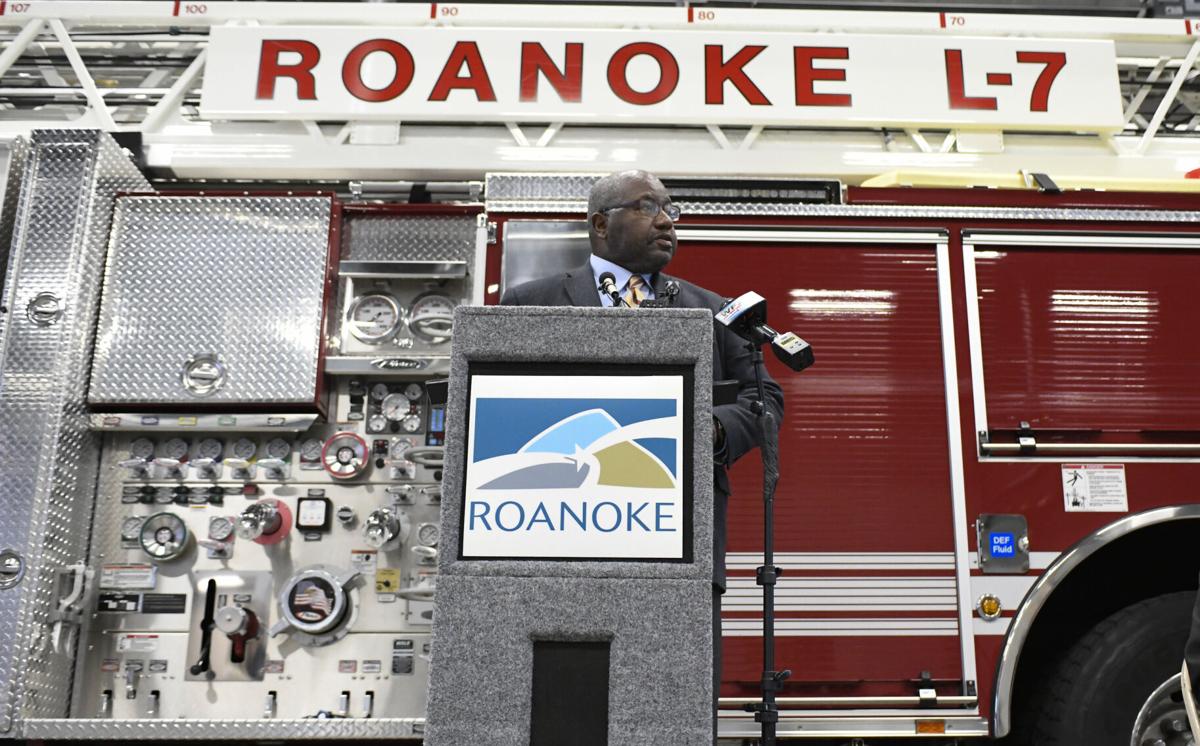 Roanoke Mayor Sherman Lea speaks during grand opening ceremonies at the new Fire Station No. 7. The new station was met with controversy when it was announced, as it replaced the facility build in 1922 that many in the community regarded as historically significant. 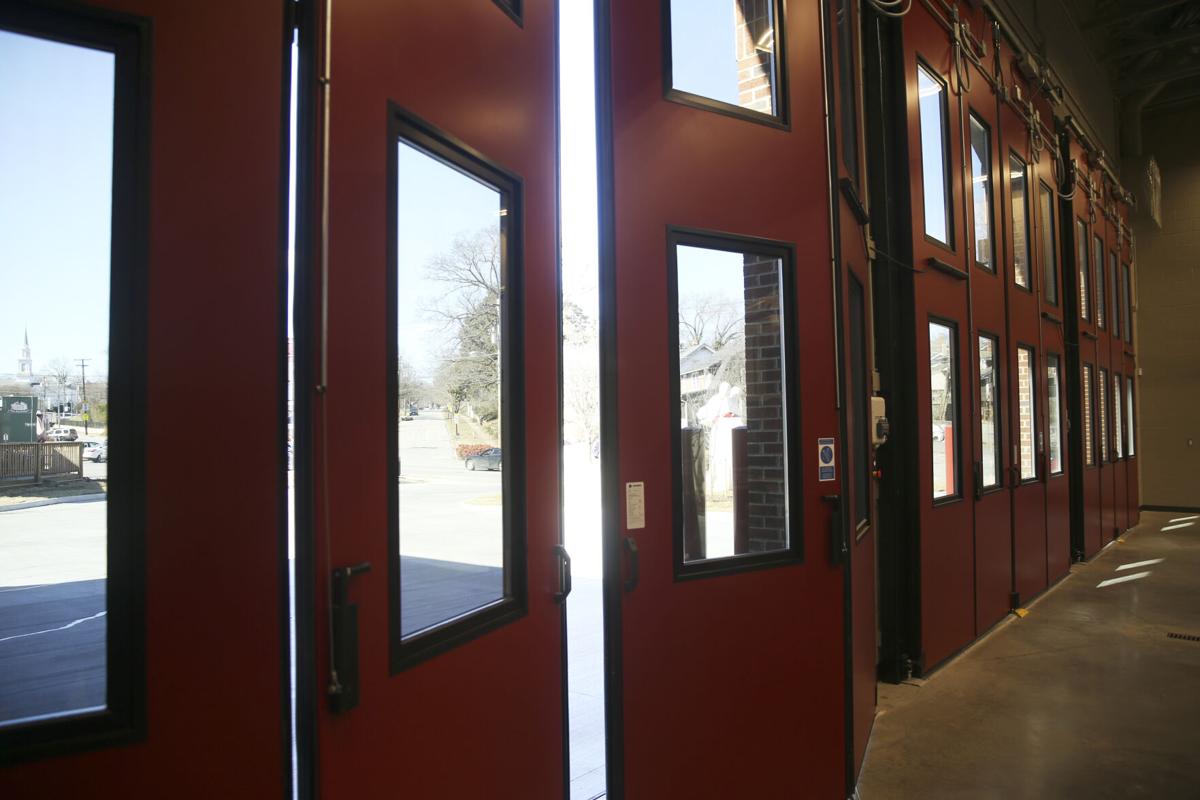 The new Roanoke Fire-EMS Station No. 7 has bifold doors in the bay entrance that open and close faster and are more efficient to repair.

Company No. 7 is home again.

“This is a great day,” said Roanoke Fire-EMS Chief David Hoback. “We built this station for the next 75 years of service to this community.”

The reconstruction of Fire Station No. 7 has been a closely watched and anticipated project in Roanoke.

The new firehouse, christened with a grand opening Wednesday, offers almost four times as much space and is better designed to meet modern needs — including, crucially, being able to properly house both male and female firefighters. That is something the prior, circa-1922 fire station couldn’t do.

“I certainly want to thank our fire and EMS personnel,” said City Manager Bob Cowell, adding that while the historic station was of a great era it was no longer able to support the community’s needs.

“You endured a lot waiting for this moment,” he said to first responders during Wednesday’s ceremony.

The new fire station spans about 16,000 square feet and will house 24 staffers who work in shifts of eight at a time.

A ladder truck and a medic unit will operate out of the site on Memorial Avenue. The firehouse runs an average of about 3,000 calls per year across Raleigh Court, Grandin Court, Wasena and surrounding neighborhoods.

The new station occupies the same spot as its predecessor, which was demolished to make way, a move that was controversial with preservationists and neighborhood advocates.

The fire department said it strived to work closely with those groups and to honor the history of the site.

The new design mirrors the architectural features of the 1922 firehouse, and materials preserved from the older facility are woven throughout it. An entryway is lined with original brick complete with stone markers denoting the years of major changes to the station.

In the kitchen, which offers twice as much space as the cramped quarters of the past, pots and pans hang from salvaged fire hooks, sliding doors were fashioned with the same sturdy wood doors that used to be closet entrances, and the dining table is held aloft by legs made from the prior station’s brass fire pole. Black Dog Salvage assisted the city in preserving and repurposing pieces.

Down the hallway, picture frames crafted from the windows of the old station hold photos that showcase its history, from black-and-white images of its earliest years to the development of the modern-day firehouse.

Hoback noted the city didn’t want a fire station that was merely utilitarian but that instead reflected the character of Roanoke and was welcoming for both the neighborhood and staffers alike.

“We hope people will be pleased,” he said, adding that during construction the department heard from some people whose minds were changed once they could see how the project was coming together.

“I think they realized we were carrying forward the characteristics of the old station to the new station,” Hoback said.

Wednesday’s celebration included the Roanoke Valley Preservation Foundation, which designed a historical placard that will be hung outside the station later this year. The placard, which will share the history of Fire Station No. 7, will be placed in an entryway facing Memorial Avenue that is also outfitted with a water bottle filling station for the neighborhood’s runners and other passersby.

Alison Blanton, president of the preservation foundation, said the day was slightly bittersweet, as she had been among those who favored saving the original fire station.

But, she added, the city had honored its promise to respect the site’s history and to ensure that the firehouse continued to fit into the fabric of the neighborhood.

“I think it’s beautiful,” she said of the new station. “It’s one of the better public buildings that the city has built in a long time.”

The new firehouse is set to come in just under budget with a total price tag of about $7 million. The construction took about 13 months. The original one-year timeline was slightly extended when the pandemic hit and slowed delivery of materials.

The opening celebration couldn’t include a public open house, as originally envisioned, in light of COVID precautions.

Roanoke Fire-EMS instead broadcast a virtual tour that can be found on all its social media pages.

New resources built into the design include a fitness room and a turnout gear room where firefighters can shower, change and launder their clothes after a call. That allows them to swiftly and efficiently shed debris that is now recognized as a carcinogenic health hazard.

Major upgrades were also made to the living quarters for first responders who work in the station in 24-hour shifts.

In the past, a shortage of space meant beds had to be shoved right next to one another. And bathrooms had an open plan, dorm-style layout that offered no privacy.

The conditions made it difficult, if not impossible, to house men and women together in the station.

The new building has enough space for single-user bathrooms and for separate sleeping quarters.

Two women are now assigned to the station, including acting Capt. Kelly Waskewicz, and a third will be joining after the next recruit class graduates.

Waskewicz served on the staff design committee that labored over Fire Station No. 7’s plans for six years before construction started. And she was the one picked by the station to formally mark the firehouse back into service with the dispatch center during Wednesday’s event.

“It’s an honor,” she said, adding that it had been a privilege to help develop the plans.

“This station can house anybody now, it doesn’t matter if you’re male or female. And it’s going to have great function for the Grandin community.”

The station’s radio crackled to life as Waskewicz alerted the dispatch center that Fire Station No. 7 was back and ready to accept calls.

“Congratulations,” came back the voice on other end, “and welcome home.”

Watch Now: Tour the new Fire Station No. 7 in Roanoke

After more than a year of work, the reconstruction of Grandin's Fire Station No. 7 was unveiled to the public Wednesday. The new design incorp…

After months of discussion and further study, the Roanoke City Council saw no reason Monday to veer from its plan to replace 96-year-old Fire …

Preservationists make another pitch, with a plan, to save Roanoke fire station

Roanoke City Council reaffirmed its recently controversial preference for demolishing the 96-year-old Fire Station No. 7 to make room for a ne…

An online petition triggered a swell of support this week for saving the old Fire Station No. 7 on Memorial Avenue, which is slated for demoli…

According to tradition, the flag cannot be raised over a fire station before it is dedicated. With the grand opening and ribbon-cutting for Station No. 7 in Roanoke, the colors were raised over the Memorial Avenue facility.

Fire EMS Chief David Hoback stands in the new apparatus bay of the new Roanoke Fire-EMS Station No. 7, where he says larger modern ladder fire trucks can fit. The modern fire trucks could not fit in the old fire station.

Roanoke Mayor Sherman Lea speaks during grand opening ceremonies at the new Fire Station No. 7. The new station was met with controversy when it was announced, as it replaced the facility build in 1922 that many in the community regarded as historically significant.

The new Roanoke Fire-EMS Station No. 7 has bifold doors in the bay entrance that open and close faster and are more efficient to repair.