Robert Fralin proposes building four apartment buildings where the trees are seen standing along Brandon Avenue. The Wasena intersection is pictured from Main Street. An already heavy flow of traffic at the intersection is one concern raised by opponents of the housing complex. Orange cones are out as bike lanes are being painted by city contractors on Monday. 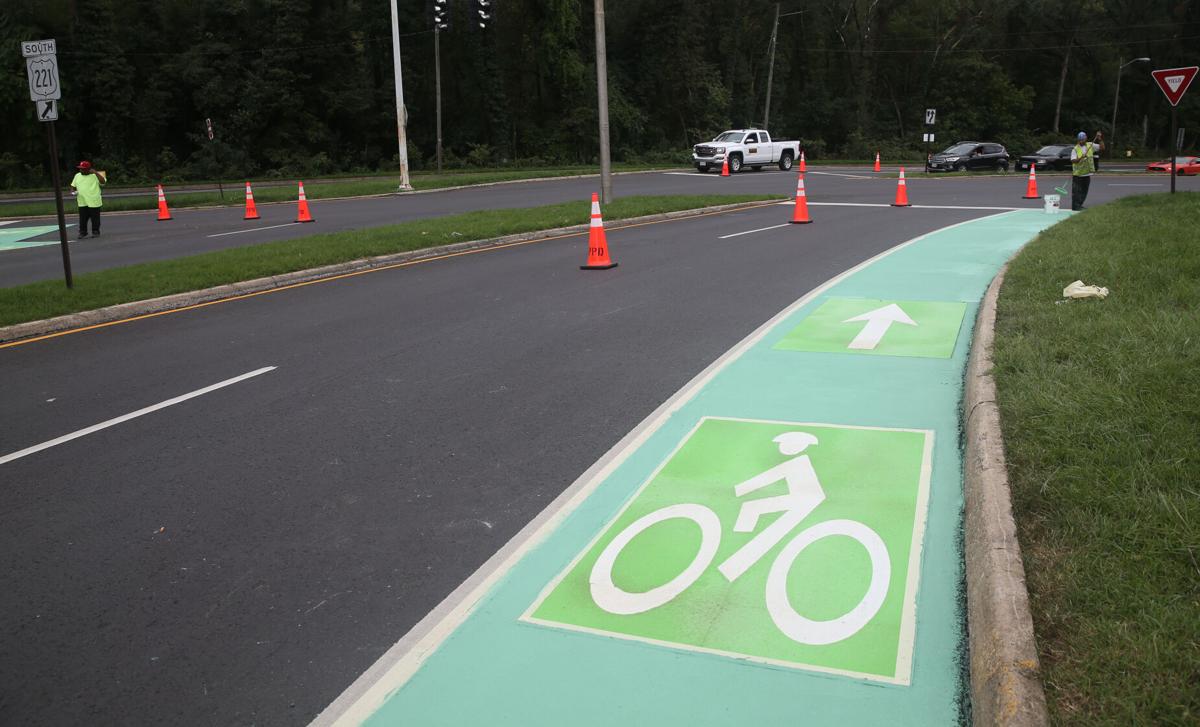 New bike lanes are painted at the Wasena intersection where Main Street meets Brandon Avenue on Monday. A proposed housing development soon to be considered by Roanoke City Council would be built nearby.

The Roanoke Planning Commission on Monday endorsed a developer’s request to rezone a small forest on Brandon Avenue to build 69 multifamily housing units — a second proposal after another for the same property was denied in 2017.

The developer still needs city council approval of the latest project, and that outcome’s uncertain. The council blocked the version of the same project four years ago despite the commission recommending approval then as well.

Monday’s vote came after Robert Fralin of R.P. Fralin Inc. told officials that he brought back his housing proposal because, “I really believe this project deserves another look.”

However, Fralin resubmitted a layout for vehicular access that council members found unacceptable in 2017. That shortcoming was flagged by the staff of the commission, which came out against the 2021 version of the project in spite of finding some positives to it.

But planning commissioners voted 4 to 1 to recommend the project’s approval, with proponents naming the addition of new housing bordered by a sidewalk as a plus. The council is scheduled to take up the $10 million proposal at 7 p.m. Oct. 18.

More than 7 acres of wooded land sit vacant on the south side of Brandon Avenue at Main Street Southwest. Fralin proposes building 54 apartments in four buildings along Brandon and 15 townhomes in three buildings at the rear of the property, with Murray Run flowing in between.

Vehicles would use either of two driveways to enter from or exit to Brandon. Brandon would have to handle about 375 vehicular trips daily, increasing total traffic by less than 2%, officials say.

However, departing vehicles would be permitted to turn only right, or east, toward Towers Shopping Center. Officials expressed worry in 2017 that such a set-up would prompt drivers who really needed to go west to attempt disruptive U-turns.

On the plus side, the proposal and existing development, a mix of homes and businesses, would be compatible, planning staff members found. They said official land use policy calls for higher density residential development near neighborhood commercial centers, as this would create. Planners also complimented the look and scale of the buildings — they would be no more than three stories tall with brick, stone, shake, siding and craftsman trim on the outside — and found the tree count would exceed requirements.

Brandon Avenue would get a sidewalk adjacent to the development under the plan — but only if the council agrees.

Area residents objected by the hundreds to the project increasing traffic and storm runoff and decreasing green space, while some credited it with increasing housing. The one- and two-bedroom apartments would start at $950 a month, while the town homes would be priced for sale at $275,000 or higher, said Brian McCahill, chief operating officer for the Fralin residential development company. Fralin deemed it an affordable housing project.

“The development was not good three years ago and it’s worse now,” said developer and former council member John Garland, who was in office for the 2017 vote. Garland, speaking to the planning commission on Monday, called the proposed traffic pattern “very problematic.” Garland further noted that Fralin’s 2017 proposal depicted only apartment buildings, but that the developer added the town homes to create the latest version. Garland lives on a nearby street.

Catherine Greenberg, also a nearby resident, expressed fear that a vehicle might drive off Brandon in the direction of one of the proposed new apartment buildings. “If someone makes a slip of their hand with the steering wheel, they are in someone’s living room,” she said.

In response, a developer’s representative explained that city planning guidelines call for development along roads. In this case, the front of the apartment buildings would sit about 20 feet from the edge of the closest travel lane.

The property, which Fralin did not own in 2017 but owns now, will be developed, McCahill and Fralin said.

“There’s only so long that we can carry this land without making it perform,” McCahill said in an interview.

Fralin revealed what he could build under the current, single-family zoning for the land and what he says he will build if officials reject his proposed planned development: He would line Brandon Avenue with a dozen rental homes, each with its own driveway, with rents starting at $1,399 monthly.

Planning commissioner Kit Hale, before voting yes, said that he could envision residents backing out of their driveways onto Brandon or backing in from Brandon, which he described as a “significant safety concern.”

Police: No charges will be placed in death of Roanoke motorcyclist

No charges are expected in a Sept. 23 traffic collision that killed a 28-year-old motorcyclist, according to Roanoke police.

Robert Fralin proposes building four apartment buildings where the trees are seen standing along Brandon Avenue. The Wasena intersection is pictured from Main Street. An already heavy flow of traffic at the intersection is one concern raised by opponents of the housing complex. Orange cones are out as bike lanes are being painted by city contractors on Monday.

New bike lanes are painted at the Wasena intersection where Main Street meets Brandon Avenue on Monday. A proposed housing development soon to be considered by Roanoke City Council would be built nearby. 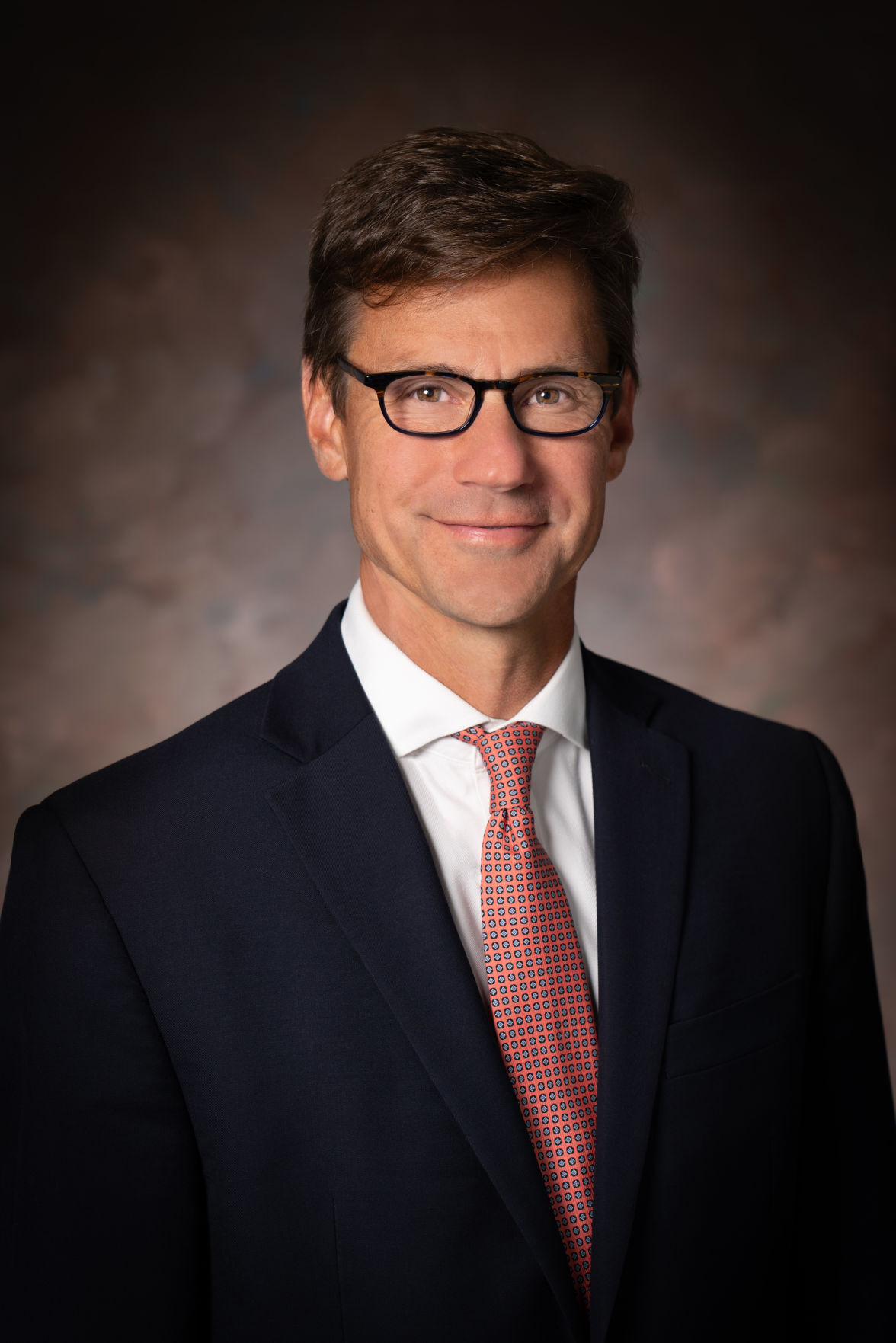