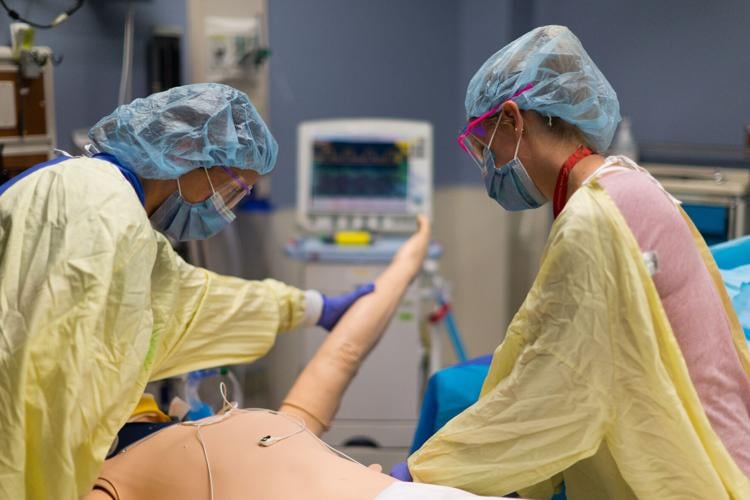 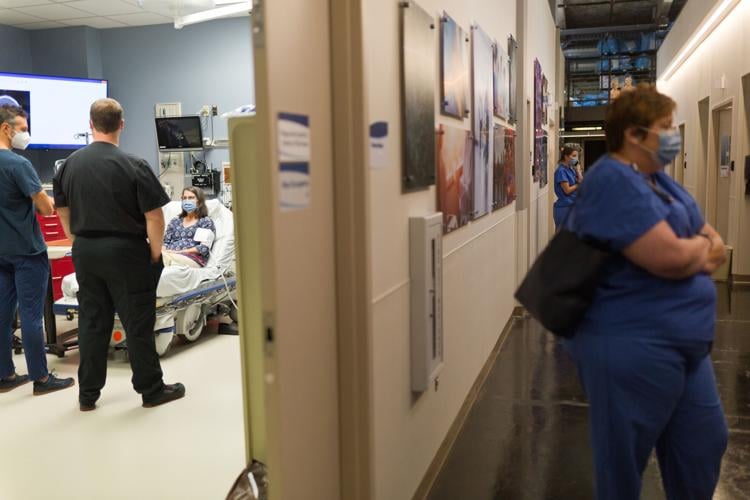 Carilion Clinic medical employees practice their skills on a live, mock patient in a mock trauma room at Carilion Clinic Center for Simulation, Research and Patient Safety on Friday. 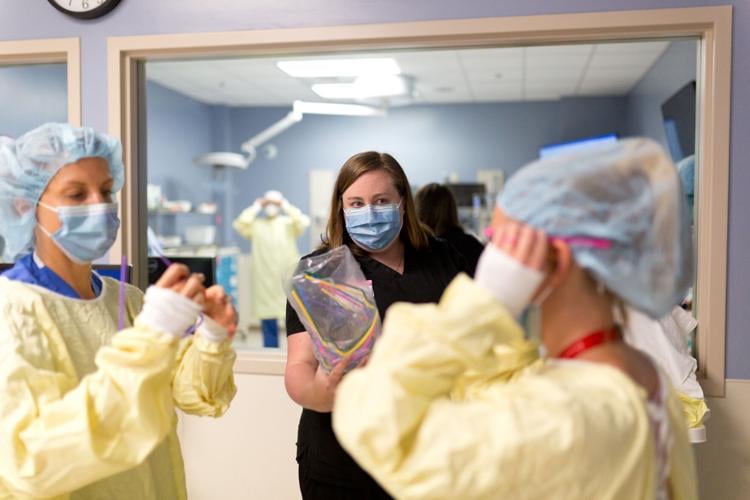 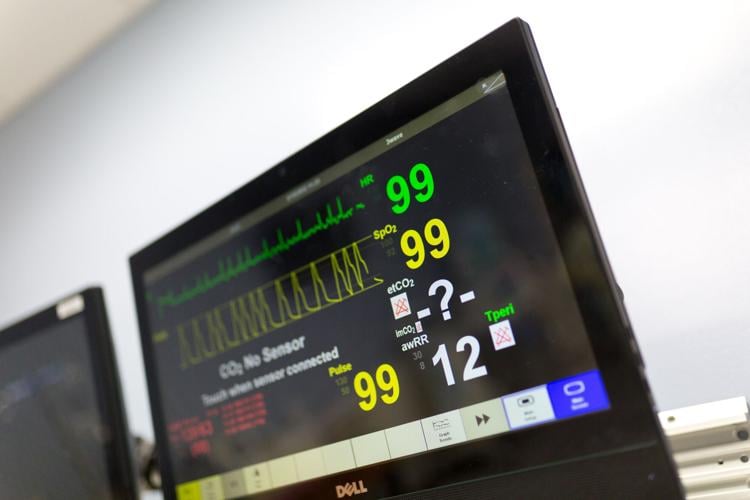 A vital signs monitor is ready for nurses to practice emergency department skills on a high-fidelity mannequin at Carilion Clinic Center for Simulation, Research and Patient Safety on Friday.

The five nurses gathered last week around a hospital training mannequin called “Chaz” were practicing the quick, coordinated steps they would take to reinflate a patient’s collapsed lung — the sort of lifesaving skills needed more and more often at Carilion Roanoke Memorial Hospital.

That’s because the Roanoke hospital is the only Level 1 Trauma Center in a region that covers Western Virginia and parts of West Virginia. It is where people injured in the worst medical emergencies end up, often being rushed by helicopter from other hospitals or directly from the scenes of vehicle crashes or other incidents.

Since 2018, the number of trauma cases treated at Carilion Roanoke Memorial Hospital has risen by about 54% — from 2,988 cases in 2018 to 4,595 cases last year. This year, figures through the end of August show the trauma center heading for a total similar to last year’s.

The climbing number of trauma cases are in line with Carilion’s projections and are a driving factor in the health system’s ongoing $300 million expansion, said Ottilia Lewis, a nurse who this year became Carilion’s trauma outreach coordinator. The Crystal Spring tower rising beside the hospital will add three new trauma bays to the two presently in use, said Lewis and Chris Turnbull, Carilion’s senior director of corporate communications and operational continuity.

The new trauma bays won’t be ready for use until 2025, Turnbull said.

Part of Lewis’ job is education efforts aimed at heading off serious injuries; she regularly delivers talks to seniors about preventing falls and to high school students about driving-related injuries. In coming weeks she’ll be speaking to students about “Stop the Bleed” interventions, such as tourniquets, to underline the seriousness of safe driving.

Year after year, ground-level falls and vehicle accidents send the most patients to the trauma center. “Those are always one and two,” Lewis said.

The shootings that have plagued Roanoke and other parts of the trauma center’s coverage area account for 5% or less of the thousands of patients being cared for. Violent incidents as a group — a category that includes stabbings and assaults of different types — usually make up around 10% of the overall trauma center caseload.

But while gunshot wounds afflict a small percentage of the trauma center’s patients, they can soak up a disproportionate amount of resources, Lewis and Turnbull said.

Gunshot victims are hospitalized an average of 14 days, “more than twice our average surgical patient’s stay of 6.5 days,” Turnbull wrote in an email.

The estimated cost of care for an average gunshot wound victim is about $38,000, a figure that is an internal accounting for treatment costs, not necessarily the payment received for services, Turnbull wrote.

In contrast, a quick sample of trauma patients who “fell from a standing position” showed an average hospital stay of 3.7 days and an estimated cost of care of $8,100, Turnbull wrote.

A medical team treating someone hurt in a fall might include a half dozen people; in a gunshot case, there could be 15 to 20 staff members working in the trauma bay: doctors, nurses and support staff.

Most of the trauma center’s gunshot wound patients are from Roanoke and from the Danville area, Lewis said.

Caitlyn Cline, the Roanoke Police Department’s community outreach, public information and crime prevention official, wrote in an email that violence in the city has tracked nationwide trends. Education, economic factors, and drugs all affect the level of violence, but finally, each incident comes down to individual decisions about how to resolve disagreements, she wrote.

Police will do all they can to keep Roanoke safe, but “until the choice is made to put down those guns and solve issues without violence, it is almost certain the numbers will increase,” Cline wrote.

Carilion’s trauma team provides the hospital system’s most intensive care, Turnbull said. It officially includes about 30 people although more may be brought in depending on what is needed.

A trauma care nurse for five years before becoming the outreach coordinator, Lewis was among the group that gathered Friday around Chaz the mannequin, mostly just to demonstrate the sort of fast reaction that occurs when a new patient arrives.

Leader Tilley Rowe, a nurse practitioner, had logged seven years with the trauma team. She had just finished a shift in the actual trauma bay and arrived at the training room with her protective eyewear pushed up on her forehead.

Jen Bath, a clinical nurse specialist, had worked for 22 years in trauma units in Roanoke and elsewhere. Nurse practitioner Kathy Gill was just starting with the trauma team but had four years as an RN. Nurse practitioner Sam Hall had three years of hospital experience.

There were a few moments of bantering as Chaz was wheeled into the training bay and the yellow-robed team members were told that he was a college student who sustained a collapsed lung in a fall from a balcony. “His last words were, ‘Hold my beer and watch this,’” someone said, prompting laughs.

Then the team began its work, with an assistant pouring a bit of lubricant into Chaz’s throat and Rowe smoothly inserting a tube down the mannequin’s trachea. “It’s much easier on a real human,” Rowe noted.

Soon another tube was pressed through an insertion in the side of the mannequin’s chest to drain blood and other fluid that would keep the lung from reinflating. With the fluid exiting and with a ventilator pushing air through the tube in Chaz’s throat, the lung was quickly restored. The treatment took just minutes from start to finish.

In real life, the patient would be sent for a CAT scan to look for soft tissue injuries that had been spotted earlier, then on to the Intensive Care Unit, Tilley said.

As the training room was cleared for the next session, Bath said that the lighthearted approach to the mannequin’s supposed injury was different from an actual treatment situation. There, everyone would be much more focused, intent on assessing the extent of injuries and determining what care would be needed. “We’re very quiet and calm,” Bath said.

Lewis said that in extreme situations, the trauma bay might have surgeons working on multiple parts of a patient’s body while other staff transfuse blood or keep a patient breathing. With the numbers of patients arriving in Roanoke, the treatment teams have to work swiftly.

On the busiest day in recent memory, Roanoke Memorial Hospital’s two trauma bays treated 10 people, Lewis said. They had been hurt in wrecks and falls and there was at least one gunshot wound, Lewis recalled.

On such days, “there can be a traffic jam in the elevator sometimes,” Lewis said.

The three grants for Carilion Clinic, Family Service of Roanoke Valley and Total Action for Progress will each cover a two-year period. The money comes from the U.S. Department of Justice.

Unauthorized communication between Russian soldiers, loved ones reveals how ill-equipped military is

Unauthorized communication between Russian soldiers, loved ones reveals how ill-equipped military is

Carilion Clinic medical employees practice their skills on a live, mock patient in a mock trauma room at Carilion Clinic Center for Simulation, Research and Patient Safety on Friday.

A vital signs monitor is ready for nurses to practice emergency department skills on a high-fidelity mannequin at Carilion Clinic Center for Simulation, Research and Patient Safety on Friday. 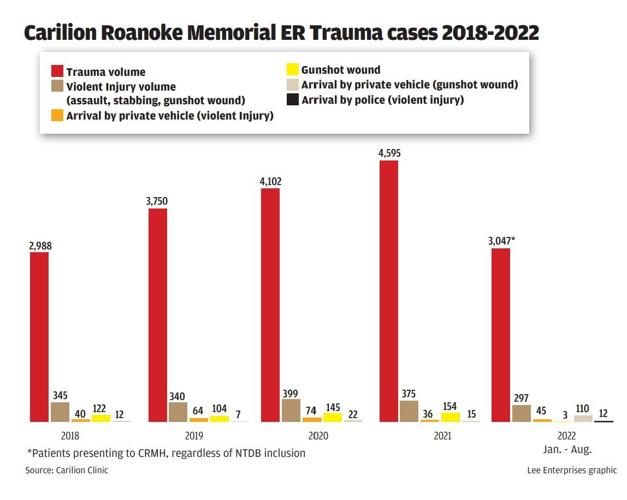