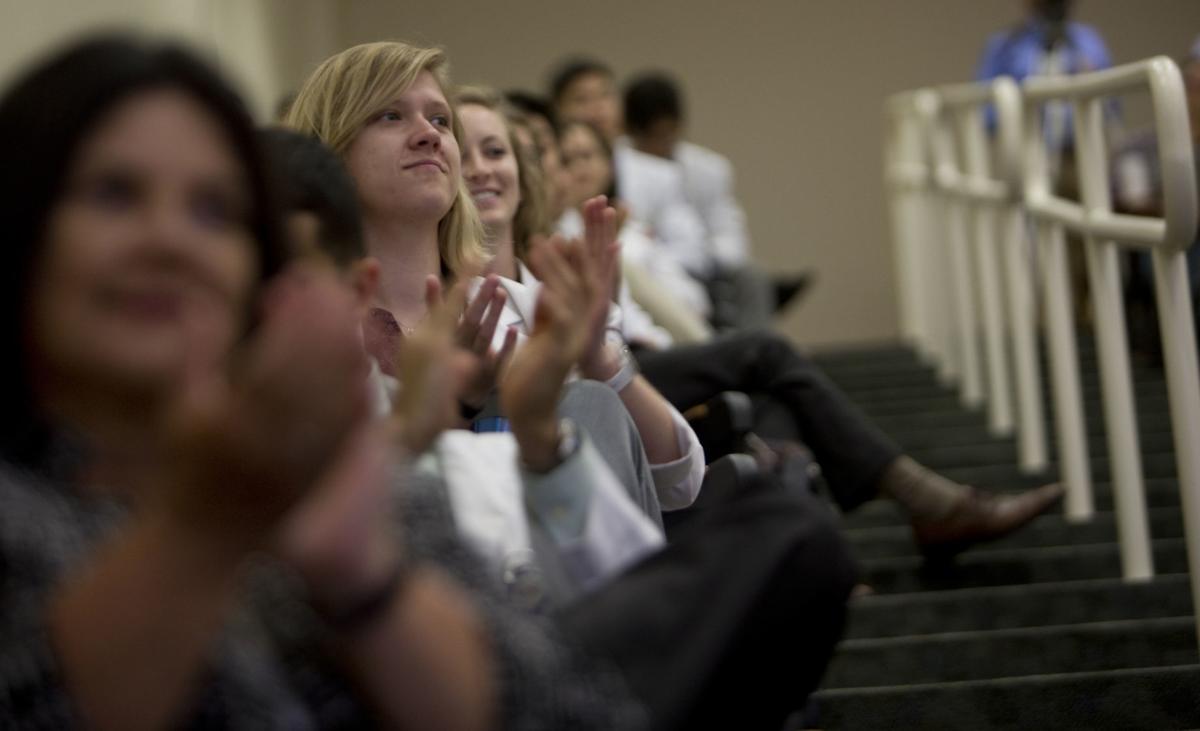 Virginia Tech Carilion Medical students applaud during a visit by Gov. Ralph Northam, on Tuesday morning during his grand rounds of medical schools to caution students about overprescribing opiods. 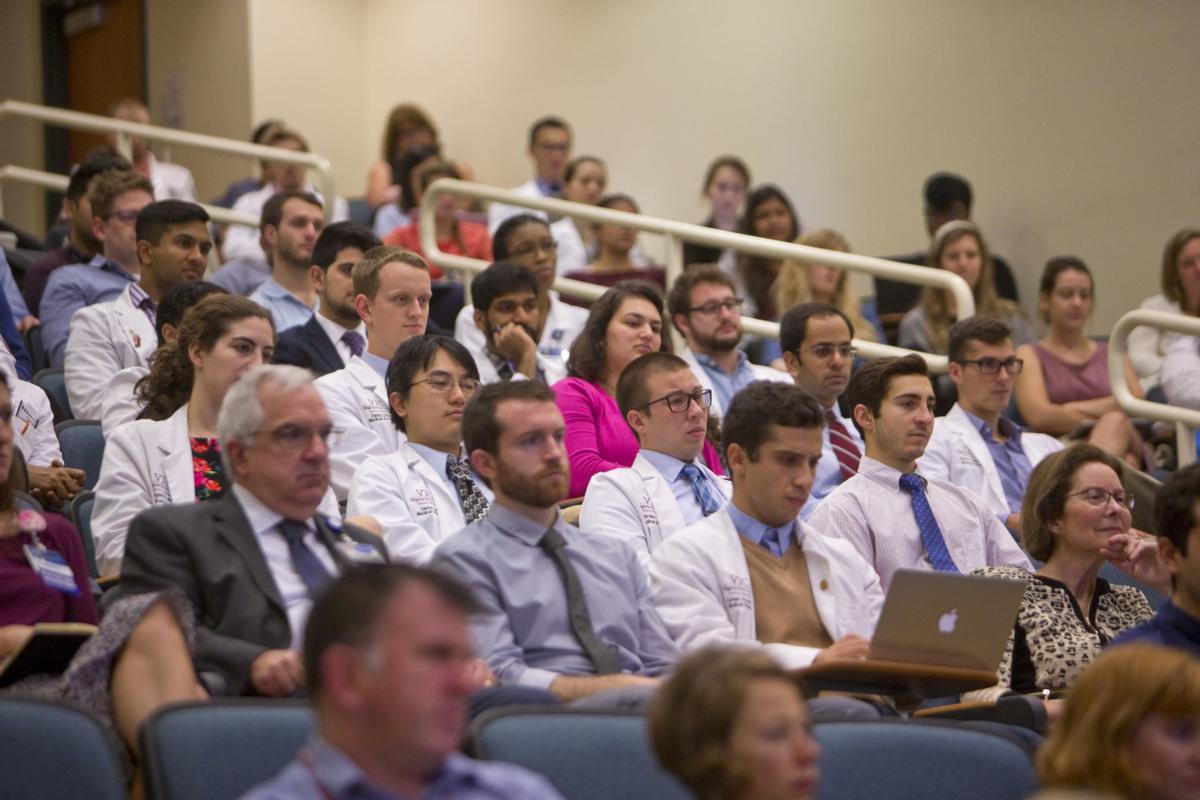 Virginia Tech Carilion School of Medicine students listen as Gov. Ralph Northam cautions them about prescribing opioids. Last year, 1,534 Virginians died from a drug overdose; 1,227 of those deaths are attributed to opioids. 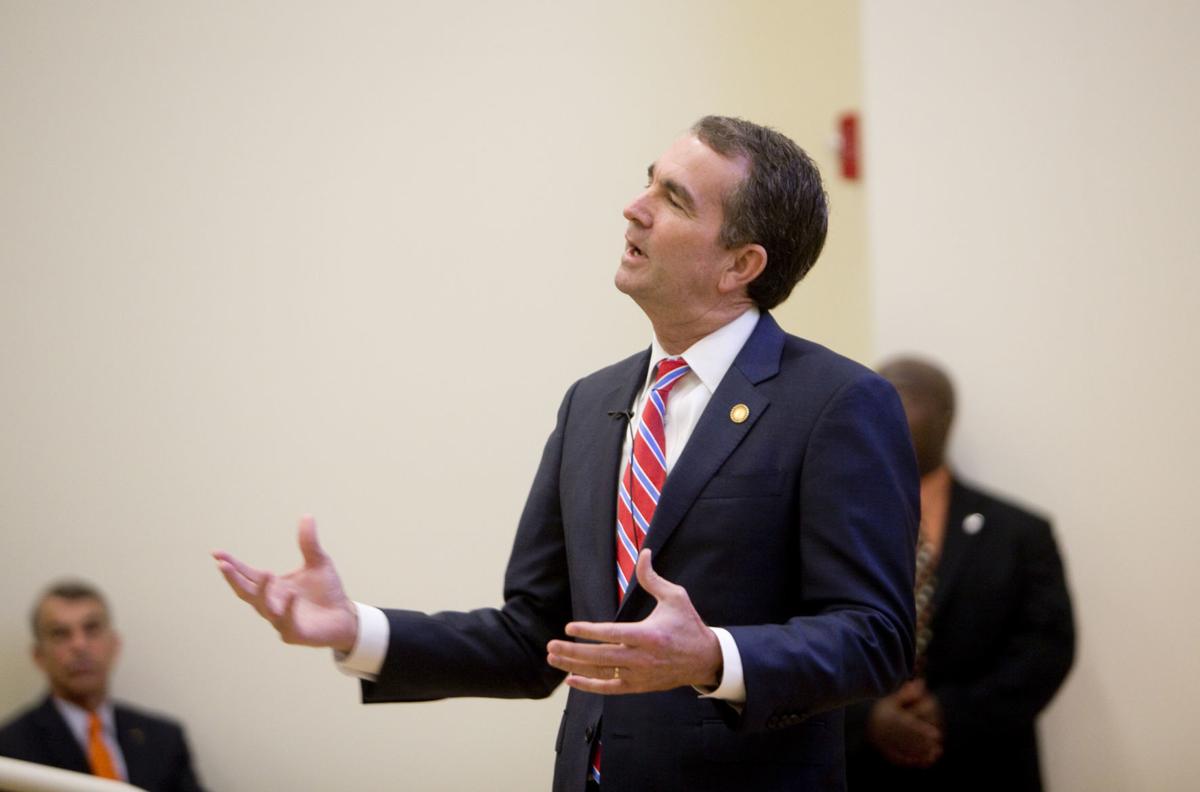 As governor, Ralph Northam has had to stop treating patients, but the pediatric neurologist continues to prescribe hope in the midst of an opioid crisis that each year kills more Virginians than car crashes.

Northam has been making house calls at the Virginia’s medical schools to talk with students about the role physicians play in causing addiction in patients. On Tuesday, he lectured at the Virginia Tech Carilion School of Medicine in Roanoke.

As with his other stops, Northam brought with him Ryan Hall, a once promising scholar athlete and son of Alleghany County Sheriff Kevin Hall, who spent 18 months in jail for stealing to support his heroin addiction.

Hall’s story plays into Northam’s underlying message to the students.

“No. 1, don’t ever take someone’s hope away,” he said. “But also be aware that with this opioid challenge, it is something that didn’t happen overnight, and it isn’t going to go away overnight. But if we continue to work together, I really think it’s something we can conquer.”

Last year, 1,534 Virginians died from a drug overdose; 1,227 of those deaths are attributed to opioids. Two of those deaths were in Alleghany County, which was an improvement over 2016 when three times as many people in the small, rural county died of an overdose.

Hall grew up in Covington and said he hadn’t even heard of heroin as a senior in high school. He was an honor student, head of student government, and youth attorney general in Virginia with an office in the state capital, and in the summer of 2010 before his senior year, Hall was fielding offers from colleges to play football.

One play changed his life. Hall, a wide receiver, had injured his hand but went into a rivalry game anyway. He was running a crack-back block to cut off a defense play, when the quarterback scrambled and brought the scrum to him. When the pile untangled, Hall was left with a leg badly broken and mangled.

A morphine drip was started on the ambulance ride. The painkiller was switched to Dilaudid in the hospital, and Hall pushed for more each time the pain broke through. By the time he could undergo surgery several days later, he said he already was experiencing difficulty in stepping down to Percocet tablets.

For eight weeks he recovered at home with two prescription painkillers. After he healed, he was at Falling Spring, a 100-foot waterfall, where kids swim in the bottom pool even though they shouldn’t.

Hall thought he was jumping into deep water; instead, he landed in three inches, breaking his leg again.

When he ran out of pain pills, he knew from the sickness that he had a problem.

“It’s like the worst case of flu that you ever had in your life,” he said.

He lied to his parents and stole. A co-worker told him if he liked pills so much, he should try heroin. It’s 10 times better.

Hall was hooked. He said he lied, stole and stayed away from his family because the last thing he wanted while using and selling heroin was to be around his sheriff father.

At least once, Hall was revived with Narcan, though he thinks he probably overdosed more than that. That didn’t stop him. Nor did 18 months in jail curb the addiction.

Kevin Hall watched from the front row of the medical school auditorium as his son talked of his addiction. The Halls hope that their story can help prevent addiction and offer hope to families going through similar circumstances.

“As a parent you are going to love your child, but you have to show tough love,” Kevin Hall said afterward. “This was the darkest time of my 32-year career as an officer, and as a father. It was never-ending.”

When he was released from jail, Ryan Hall had stopped using heroin. But he said he was still popping pills until last August.

Hall went to a faith-based recovery meeting and that set him on the path of sobriety.

“I accepted Jesus Christ,” he said.

Northam talked to the students about policies Virginia has adopted, including starting an Addiction and Recovery Treatment Services program through Medicaid that is building a network of providers who can prescribe medication to treat opioid addiction and offer counseling.

Virginia is also expanding Medicaid that will provide more people with a way to pay for treatment.

Northam also spoke of programs to help retrain medical providers to treat pain without opioids and to limit the number of pills prescribed.

“There are some individuals, if they are exposed to a narcotic for three or four days, they can become addicted,” he said. “So we have a new regulation in Virginia that they can only write a seven-day supply. Some people think we should back that down to five days.”

Northam told the students most importantly they should understand the value of hope. Despite all the credentials he earned and many years of practice, Northam said he didn’t understand this until he bumped into a mother in a Virginia Beach grocery store.

He had diagnosed her son with autism a decade before.

The mom wanted to explain why the family never returned to his office.

Northam told the students there is always something they can do.

Now that its story of opioid addiction is a national bestseller, Roanoke is ready to talk about it.

Roanoke city officials are poised for a delicate dance: Can they devise a needle exchange program palatable enough for the city’s top cop to swallow?

When people don’t want to acknowledge a problem in their communities, journalist Beth Macy has forced them to talk about it.

Gov. Ralph Northam has been making house calls at Virginia's medical schools to talk with students about the role physicians play in causing a…

Virginia Tech Carilion Medical students applaud during a visit by Gov. Ralph Northam, on Tuesday morning during his grand rounds of medical schools to caution students about overprescribing opiods.

Virginia Tech Carilion School of Medicine students listen as Gov. Ralph Northam cautions them about prescribing opioids. Last year, 1,534 Virginians died from a drug overdose; 1,227 of those deaths are attributed to opioids.