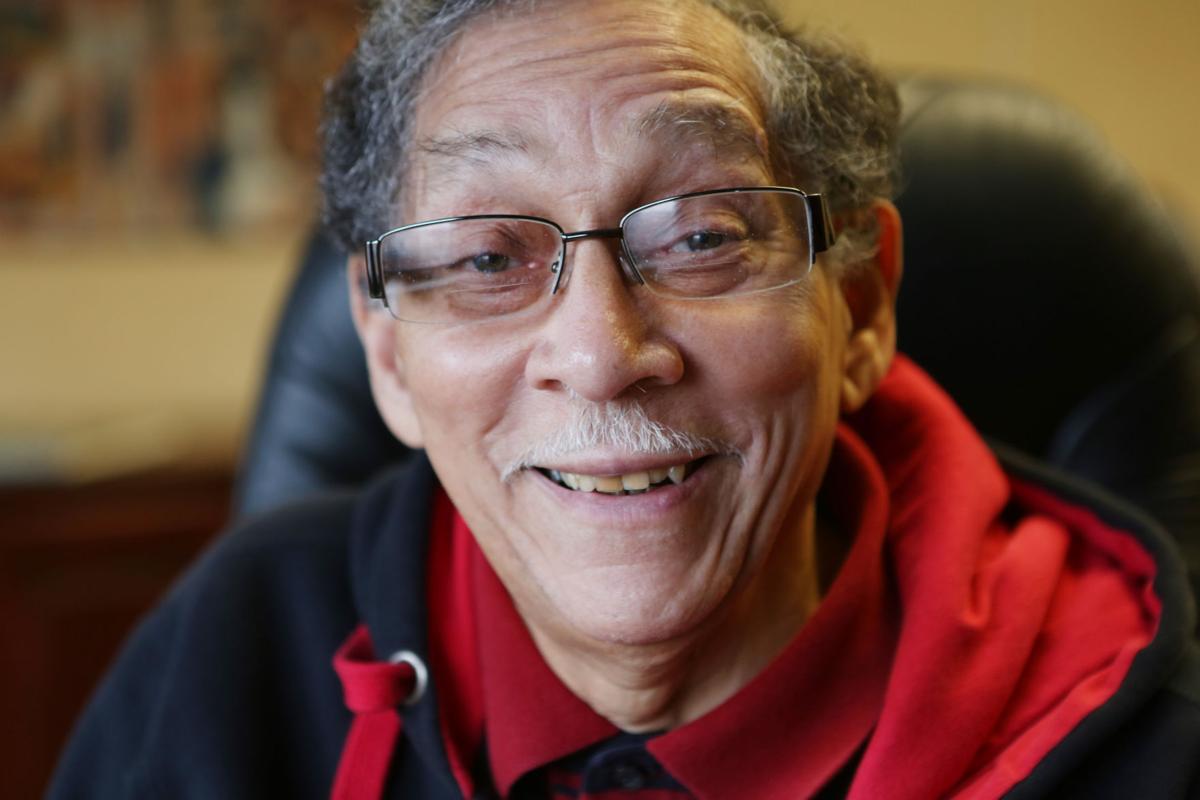 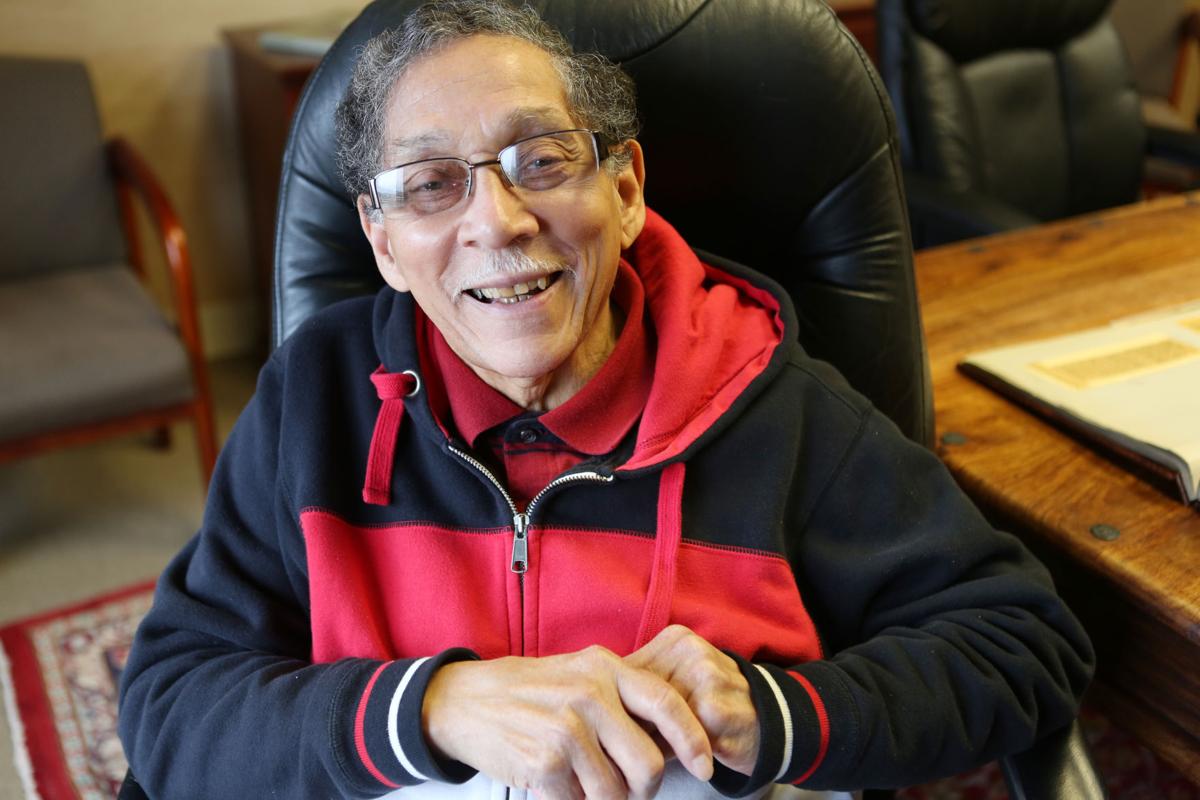 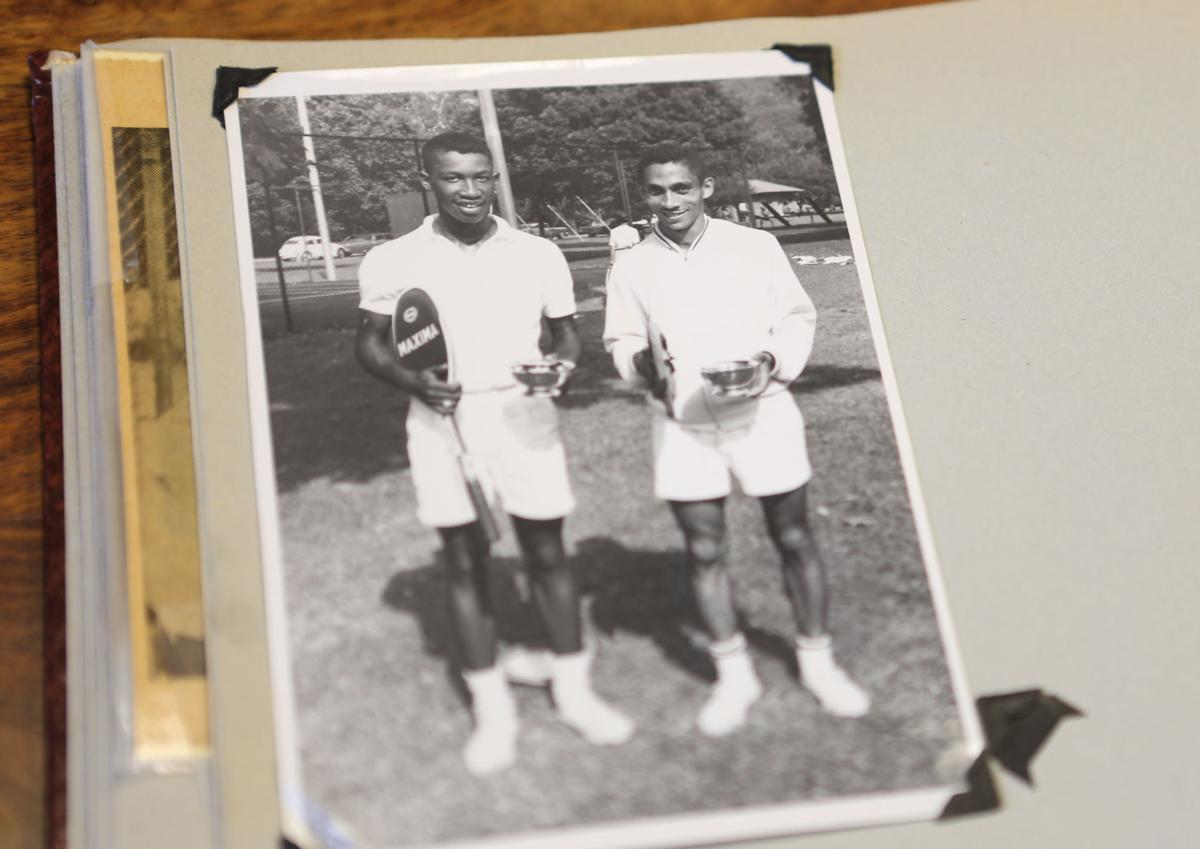 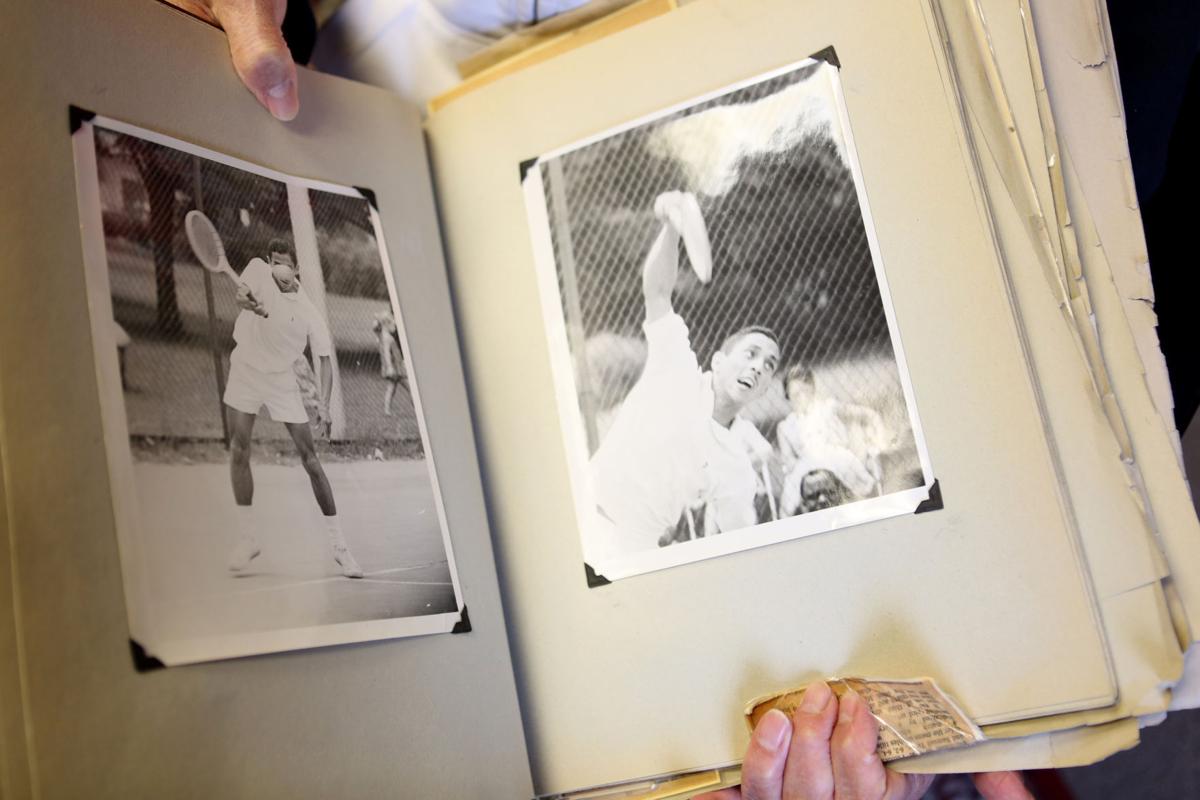 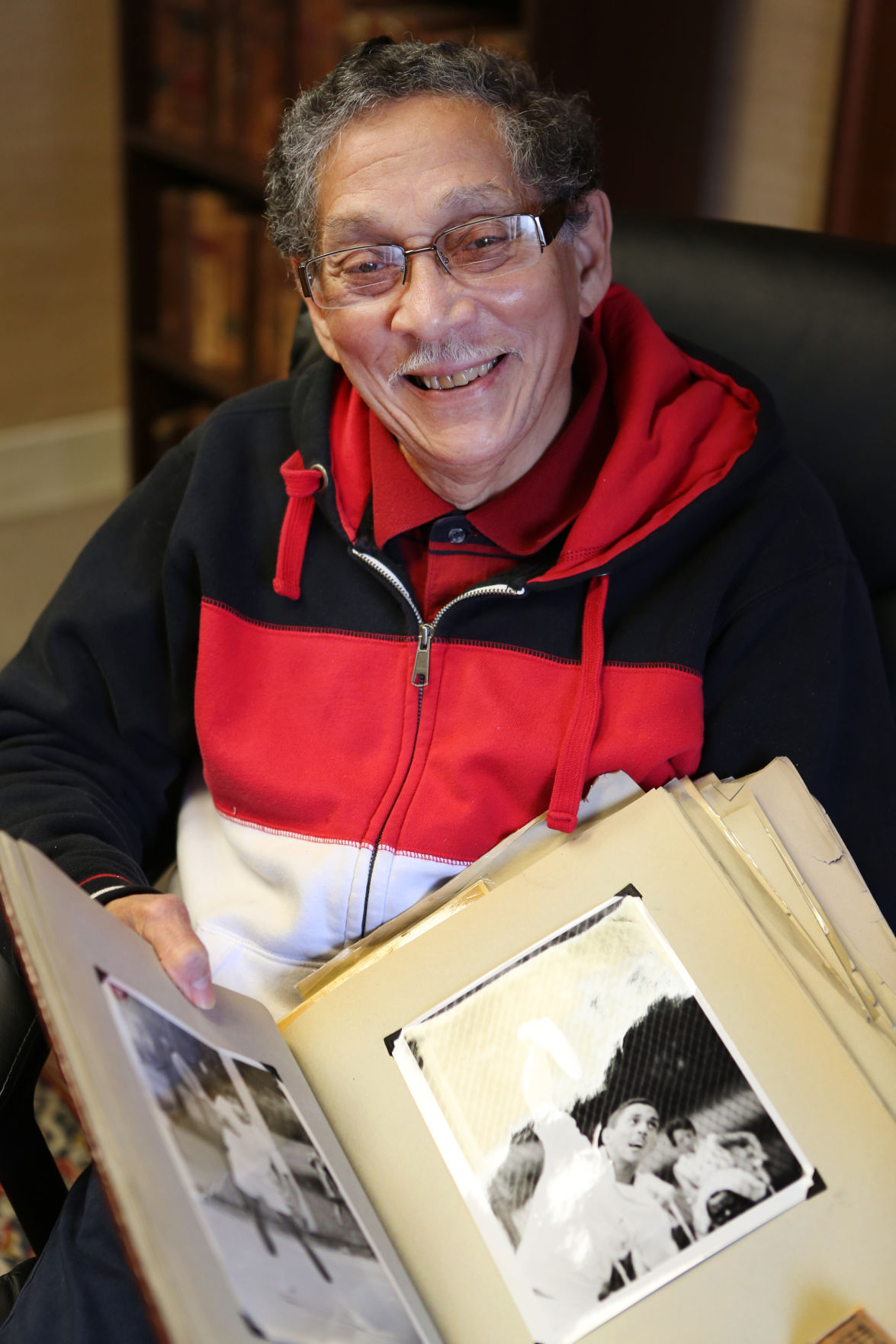 Carnis Poindexter’s late wife Vera assembled a scrapbook with photos and newspaper clippings of his tennis accomplishments over the years. 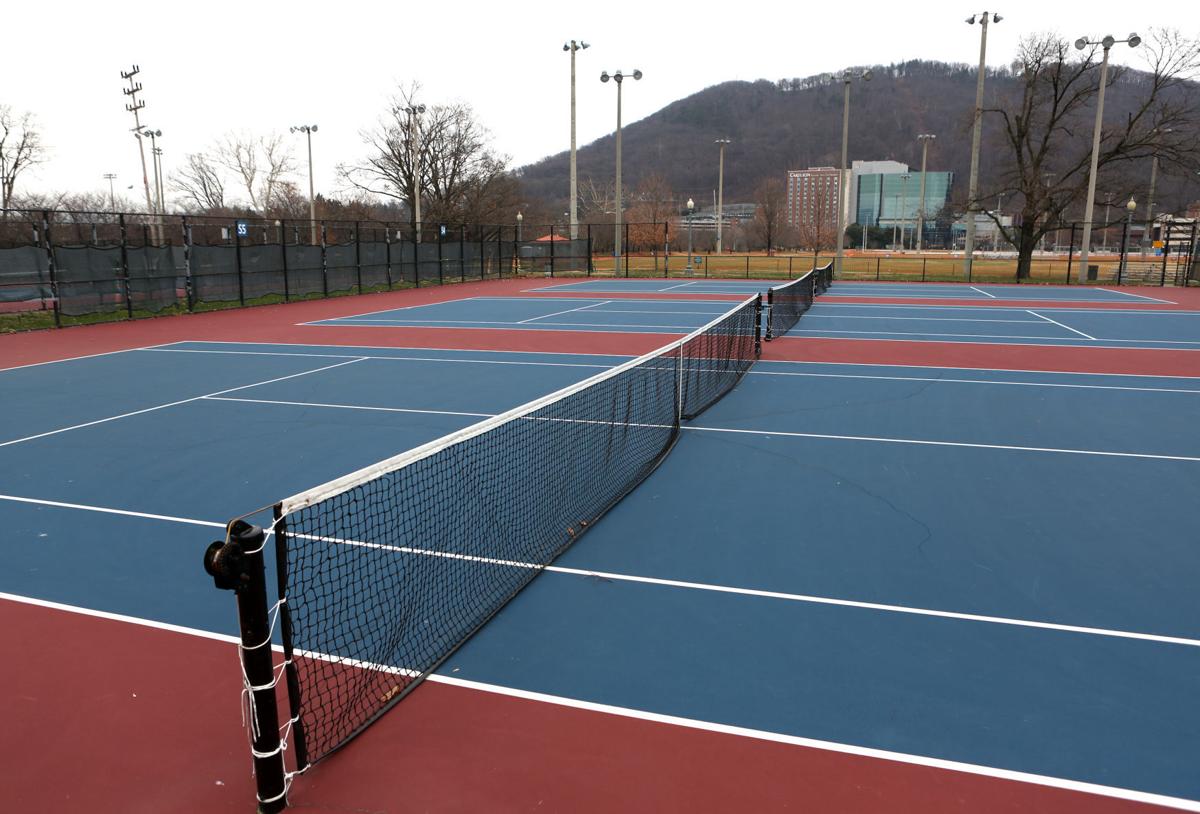 The tennis racket Carnis Poindexter borrowed from his stepfather in the summer of 1956 sure had one long reach.

It stretched from Burrell Street near the Lincoln Terrace housing project on the north side, all the way across the railroad tracks and the Roanoke River to the tennis courts at South Roanoke Park.

It bridged the Mississippi, taking Poindexter out of Roanoke to Pine Bluff, Arkansas.

Then something really amazing happened to that racket in Poindexter’s right hand.

He reached it right back to Roanoke and turned that beat-up wooden frame into a window to a brighter future for dozens of young men ready to serve.

Carnis Poindexter, today a wiry 79 years old, might be the most unlikely tennis champion ever produced in Roanoke.

He had never played tennis prior to the the summer before his senior year at Lucy Addison High School.

A young African-American without access to country clubs, he had no formal training, relying solely on books and the sweat of self-taught practice sessions on the upper Springwood Park courts or wherever he could find a concrete wall next to a flat parking lot.

Yet, in a few short months after first picking up a racket, Poindexter drew the interest of a local dentist, Dr. E.D. Downing, who had connections at Arkansas Agricultural, Mechanical and Normal University, which later became known as Arkansas-Pine Bluff.

One day, Dr. Downing tossed something his young protege’s way.

Poindexter earned a full scholarship to Arkansas AM&N, unless you count a $22.50 annual fee plus money for books he had to buy each fall.

He was an instant tennis success.

As a sophomore in 1959, Poindexter won the ATA national singles championship, a tournament for the country’s historically black colleges and universities.

During the summers while he was in college, Poindexter returned to Roanoke.

Poindexter’s recommendations are partly responsible for 25 African-American athletes from Roanoke matriculating to Arkansas in the 1960s and ‘70s to play tennis, football and basketball while receiving a college education.

Roanoke native John Eaves enrolled at AM&N in 1967 as a tennis player. He returned to Roanoke and became the first African-American accepted into Norfolk & Western’s management training program.

“In the Sixties, being an African-American and getting a college degree was not synonymous,” said Eaves, who lives in a suburb of St. Louis. “It was rare. It’s hard to say where my life would be without education.”

Mitchell packed a suitcase and his tennis rackets in 1972 and headed off to Pine Bluff with a scholarship on Poindexter’s advice.

“I doubt whether I would have gone to college without him,” said Mitchell, who earned a degree in business administration.

“My family, they probably would have tried to make a way, but I really didn’t have on my mind, college. Once tennis came into my life, I had an opportunity and a challenge in my life to do the best that I could.”

He was a 5-foot-5, 130-pound machine who could outlast opponents with his speed, deep groundstrokes and an American twist serve that he taught himself.

While opponents suffered in the heat, Poindexter was known for wearing a sweater or a warmup jacket during his matches.

“I thought I was a really good player, so I went out on the court with him,” Bolling said. “He had his little warmup jacket on. It must have been 90 degrees. After I got beat [6-0, 6-0] he hadn’t even taken his warmups off.”

Poindexter continued to play a high level of tennis into the 1970s when he was a full-time science teacher at Patrick Henry High School.

At age 35 he scored a three-set victory over 21-year-old Steve Gallagher, who at the time was a standout at Oral Roberts University.

That’s why Roanoke attorney John Fishwick is trying to make sure Roanoke remembers.

Fishwick, who played tennis at Harvard and was a highly rated junior in the early 1970s, will appear Monday before Roanoke City Council and request that the courts at River’s Edge be named after Poindexter.

“I think we should honor people who are from Roanoke, who had great success, and who broke through some barriers,” Fishwick said. “There’s no way he had the same training opportunities, the same coaching opportunities of people who were Causasian playing tennis.”

“Carnis, in his prime, was the best tennis player in Roanoke by far,” Fishwick said. “I couldn’t imagine being self-taught in tennis. I had a lot of people when I was younger try to help me. To teach yourself and to be as good as Carnis ended up being as a tennis player is a phenomenal accomplishment.”

While Ashe became a tennis legend, winning the U.S. Open in 1968 and Wimbledon in 1975, Poindexter was left to wonder. Could he have been a professional too?

Poindexter talks with pride about his tennis career ... as a coach.

After spending two years in the Army, he taught briefly at Burley High School in Charlottesville and started the tennis program there before returning to Roanoke.

He was a teacher at Addison, Jefferson and Patrick Henry high schools, coaching the PH boys tennis team for one season in 1975 when Randy Dickey and Bobby McIntosh won the VHSL Group AAA doubles championship.

Along the way, Poindexter continued to work year-round with other young players who came from the same Northwest Roanoke streets he did, the kids who needed a helping hand.

Poindexter never knew his own father. So he became a father figure to many.

“Carnis was a great influence in our lives, all that he sacrificed,” Mitchell said. “Carnis may have even been [a] pro, had he not taken time to pass it on to us. He was a real passionate man about helping others.”

When Poindexter won his first City-County championship in 1964, it was a big deal in the black community.

“I was in the stands,” Mitchell said. “Not only was he our coach and our confidant and our friend, but at the time we really didn’t know anything about how the tennis world was. It was a sport that wasn’t really a convenient thing for us to want to do.

“Once we got into that, it was good for the whole community. Once we got to the point where we could really play and hit the ball, it just became a part of the Star City of the south.”

The old coach felt his age last month when he attended the funeral of one of his former players, Douglas Younger.

“I was thinking that all these guys are still young,” Poindexter said. “But when Doug passed, it was in the paper that he was 65 years old.”

Poindexter has two sons of his own. His wife, Vera, whom he met in Arkansas, died of breast cancer in 1996.

Much of his time now is spent at Fifth Avenue Presbyterian Church, where he has been an active elder for 50 years.

The church’s most notable feature is a stained-glass window dedicated to Confederate Lt. General Thomas “Stonewall” Jackson. It depicts a group of soldiers in a camp with Jackson’s final words, “Let us cross the river and rest in the shade of the trees.”

Poindexter was pictured with two other church members in front of the window as part of a 2011 Roanoke Times article featuring noted Blacksburg Civil War historian James “Bud” Robertson.

In a book called, “The Untold Civil War: The Human Side of War,” Robertson noted that the stained glass window was commissioned more than 80 years ago by the Rev. Lylburn Liggins Downing. The reverend’s parents were African-Americans who attended a Sunday School class in Lexington taught by the future Confederate general.

Under Downing’s direction, the Roanoke church installed the window in 1906 as an expression of gratitude for Jackson’s benevolence at a time when educating blacks was illegal in the state of Virginia.

Dr. E.D. Downing, the same local dentist who spotted a young tennis player in Northwest Roanoke in the 1950s and said, “You play well enough to go to college.”

A Presbyterian minister born during the Civil War whose parents were taught Sunday School lessons by a Confederate general.

One big helping hand, reaching down and pulling everybody through the window of humanity.

Where does our help come from?

“It’s spiritual or supernatural,” Mitchell said. “It was just something I think that was meant to be.”

Following an unexpected bump in local tax revenues, the Roanoke City Council next month will consider a 2018-19 budget of $291.7 million — an …

Carnis Poindexter’s late wife Vera assembled a scrapbook with photos and newspaper clippings of his tennis accomplishments over the years.