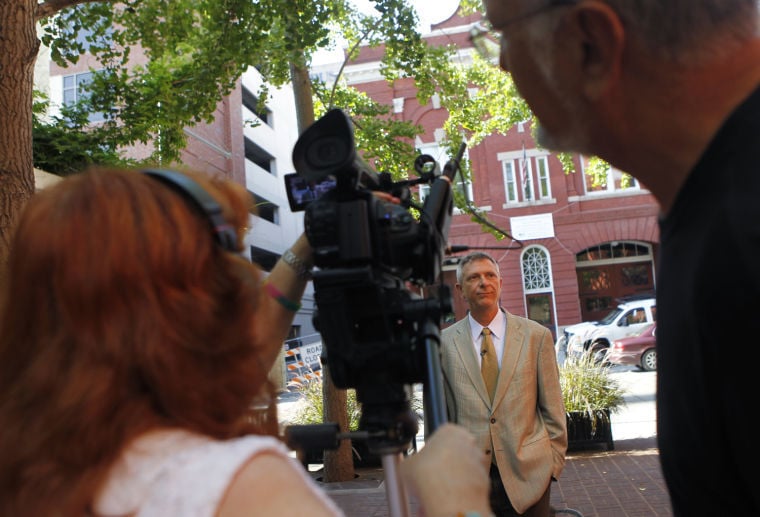 Chris Chittum, Roanoke city planning director, is interviewed Friday for a documentary about the importance and value of historic preservation across Virginia. Roanoke is one of a handful of locations that will be featured in the film. 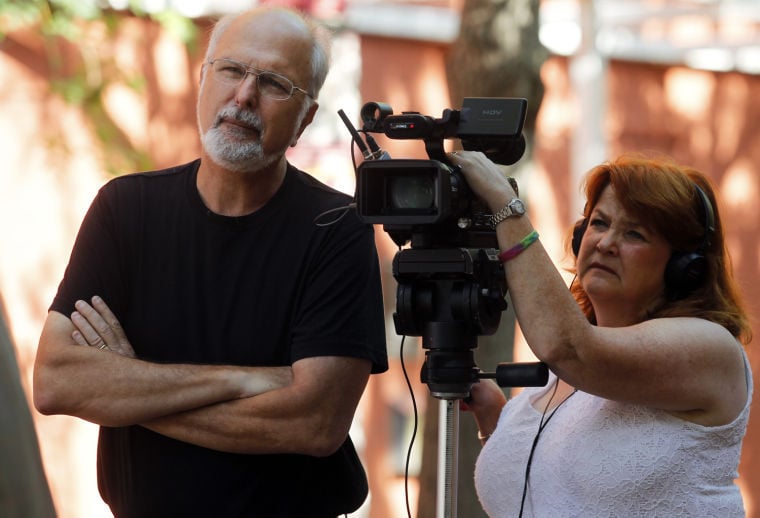 Downtown Roanoke has had a face-lift, and now it’s ready for its close-up.

A small video production company was in town to give it one just this week.

Roanoke has a role in an ensemble cast of examples of historic preservation for a documentary due out this fall.

The film, funded by Richmond-based nonprofit Preservation Virginia, will highlight success stories of historic preservation around the state.

“What it’s about is trying to look at historic preservation with an eye to showing it’s more than rich, old, white people fixing up historic houses,” said Rich Borenstein, whose Newport News-based Cinebar Productions is making the movie. “What we’re trying to do is get people’s interest piqued in the whole idea of it.”

Roanoke’s role is to illustrate how using historic tax credits to revive aging buildings can drive not only preservation, but economic development, as it has in downtown.

Chittum met the crew in front of Roanoke’s historic Fire Station No. 1 on Church Avenue, where Borenstein asked him about the role of tax credits in downtown revitalization.

“A lot of the buildings in downtown could not have feasibly been renovated without tax credits,” Chittum told him. With state, local and federal tax credits, “You can take a building that’s financially upside down and make it into a viable project.”

Roanoke is lucky to have a downtown where many examples of “timeless, classic” architecture survived, Chittum said. “I think the collection of buildings in downtown is really what makes Roanoke unique … they make Roanoke, Roanoke.”

Besides doing interviews, Borenstein and Staples spent time wandering downtown with their camera shooting “B-roll” video of buildings and sites including the City Market area and the recently renovated Ponce de Leon and Parkway 301 apartment buildings. They also visited Grandin Village and the River House apartments in Wasena.

Other sites to be featured in the hourlong documentary are preserved tobacco barns in Danville; the Woodlawn Plantation – part of George Washington’s Mount Vernon Estate; the remains of Native American Chief Powhatan’s seat of power, Werowocomoco; and Richmond’s Shockoe Bottom, where a plan to build a minor league ballpark has riled people because it’s near a historic slave market.

Preservation Virginia, founded in 1889, is funding the project, which will run on public television stations across Virginia and into Maryland.

“Roanoke quickly came to mind as segments were considered — especially after highlighting Roanoke during our Preservation Virginia conference in 2013,” said the group’s executive director, Elizabeth Kostelny.

Borenstein said his chief frustration with the film is that each of the five stories featured could make a great documentary subject on its own.

That includes Roanoke, where he and Staples say they were very well-received everywhere they went this week.

“Everybody is really excited that Roanoke is going to be featured outside of Roanoke,” Borenstein said. “That says a lot about what’s happened. People are proud of their city.”

The Roanoke City Council has named developer, entrepreneur and idea man Ed Walker its 2014 Citizen of the Year.

Chris Chittum, Roanoke city planning director, is interviewed Friday for a documentary about the importance and value of historic preservation across Virginia. Roanoke is one of a handful of locations that will be featured in the film.