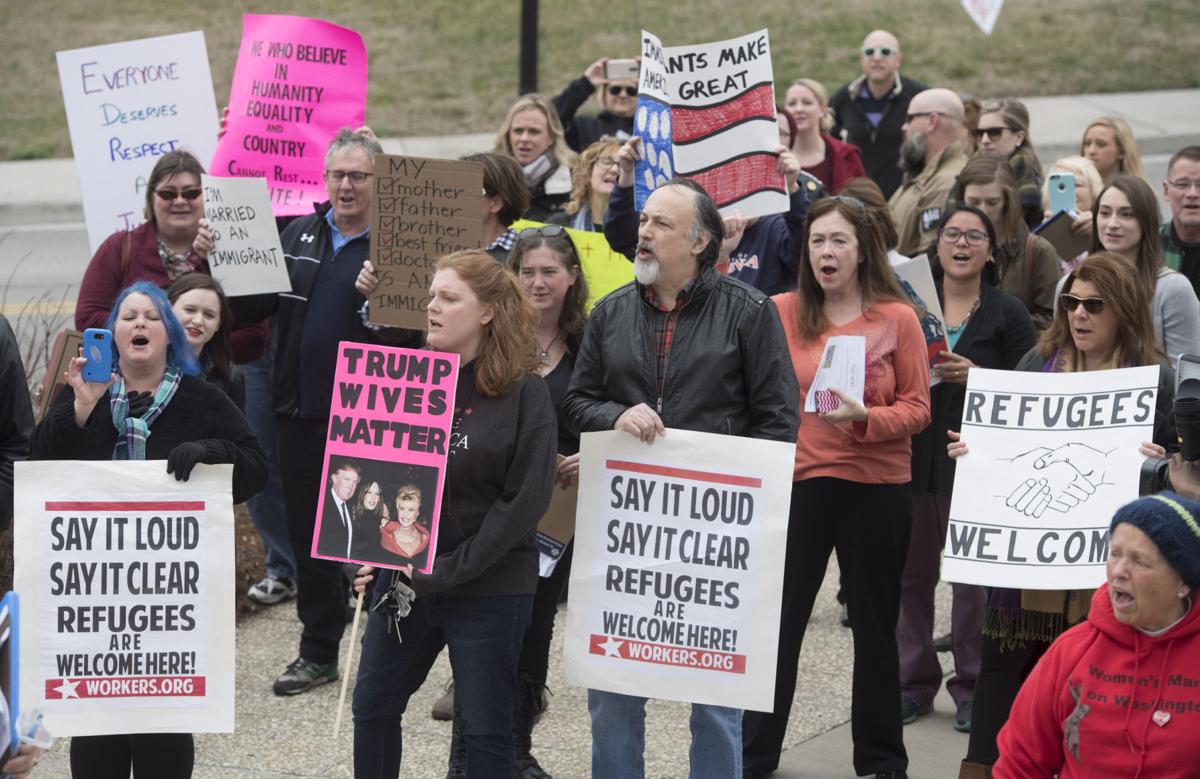 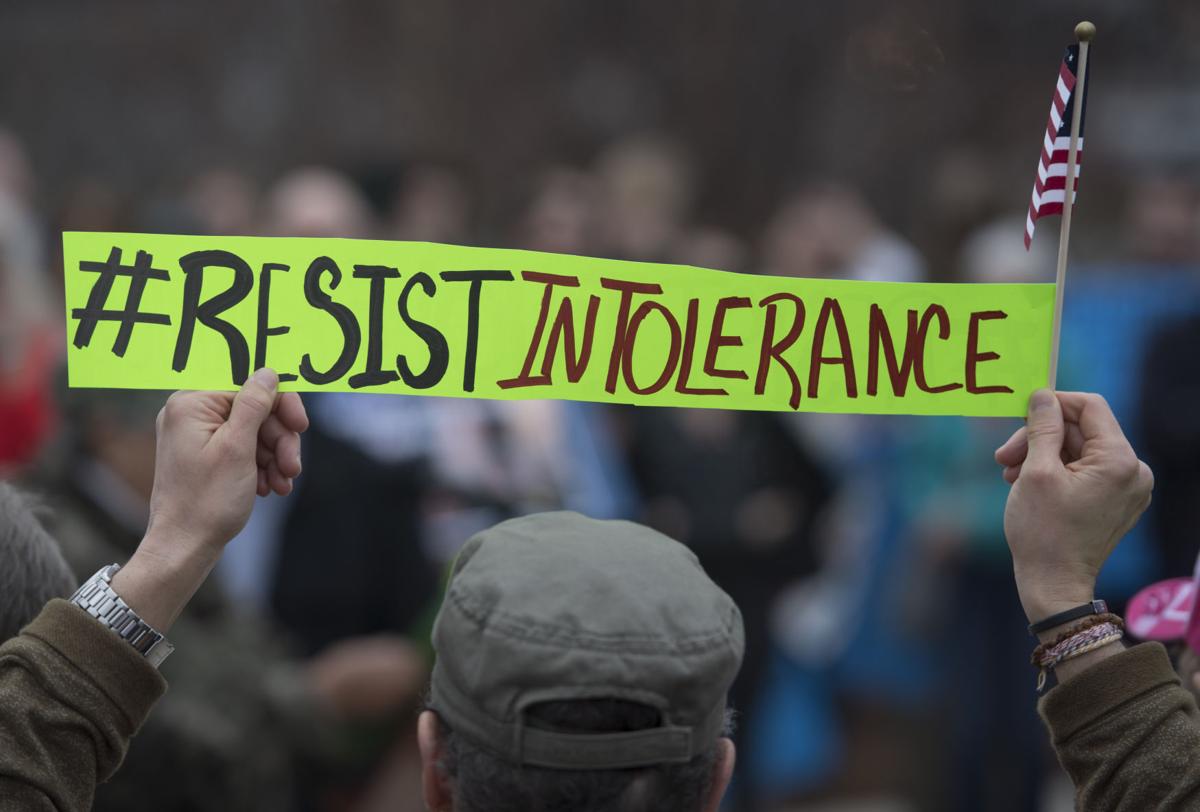 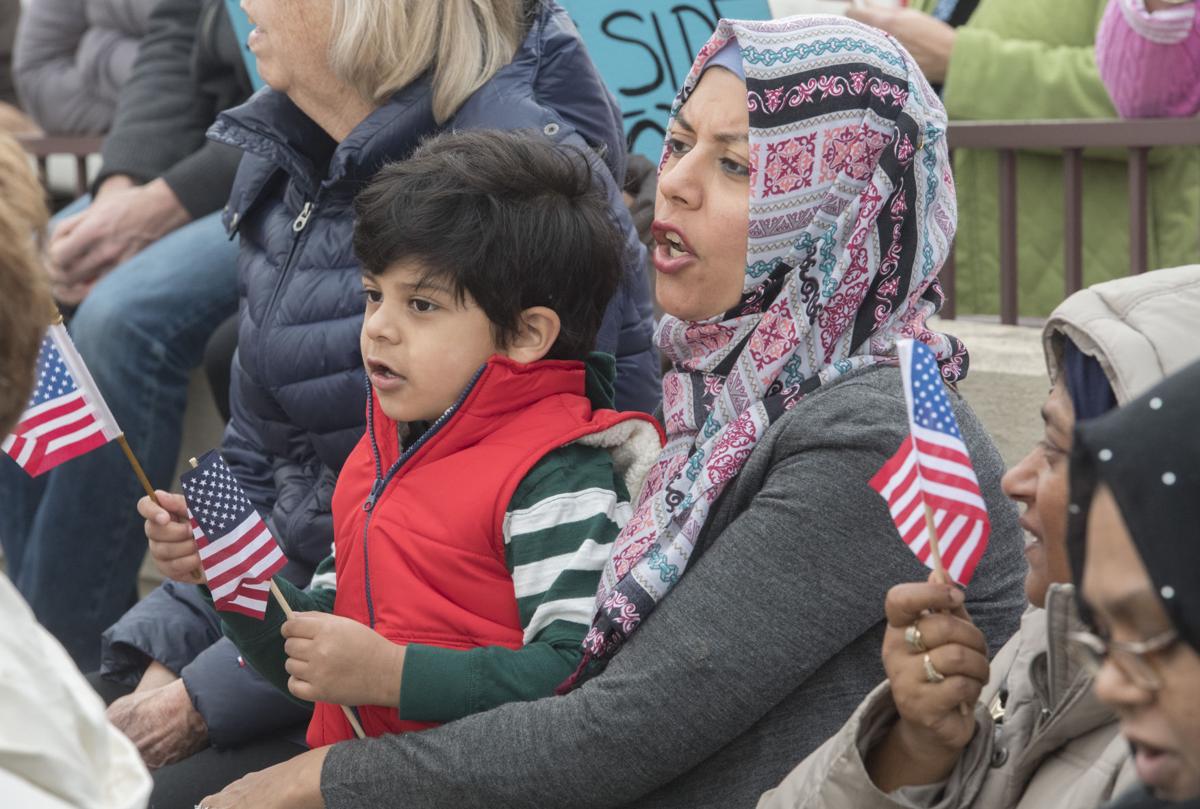 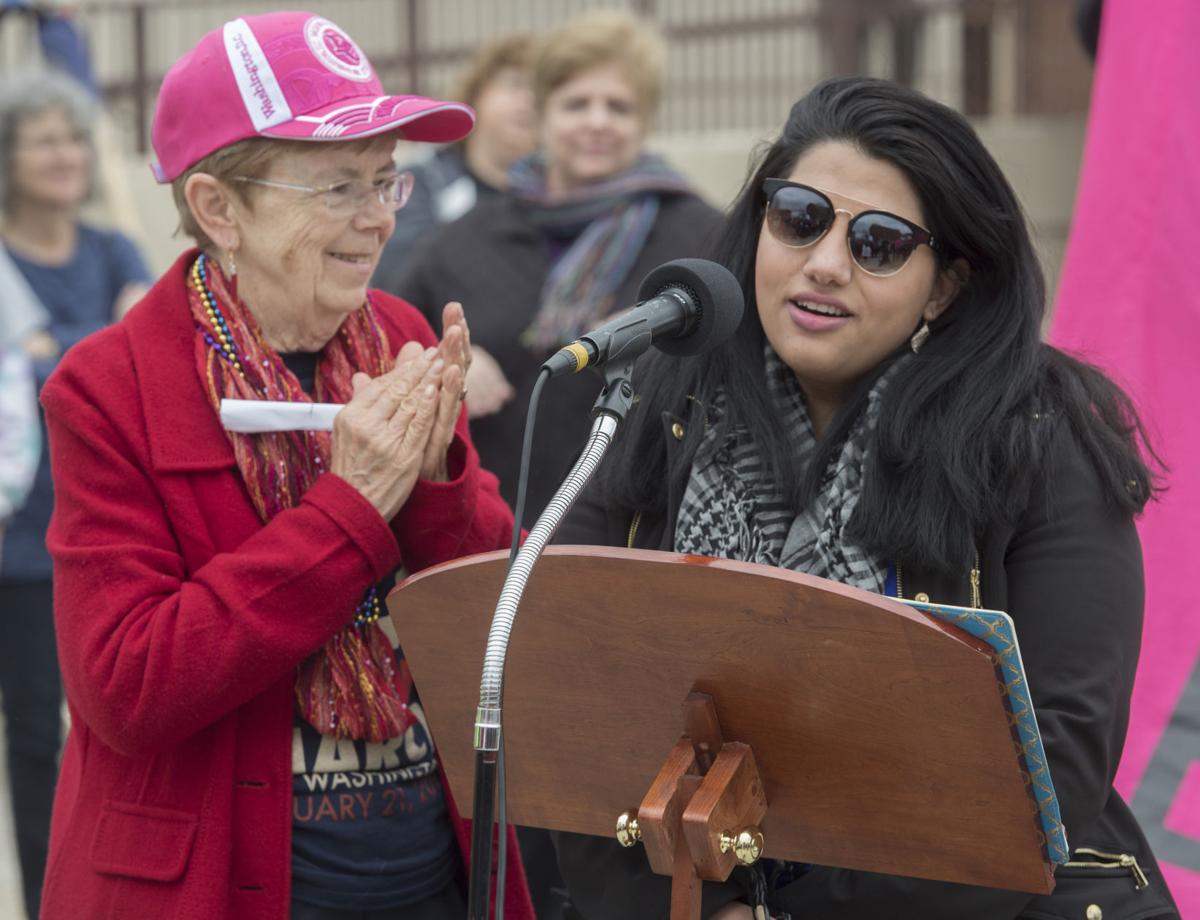 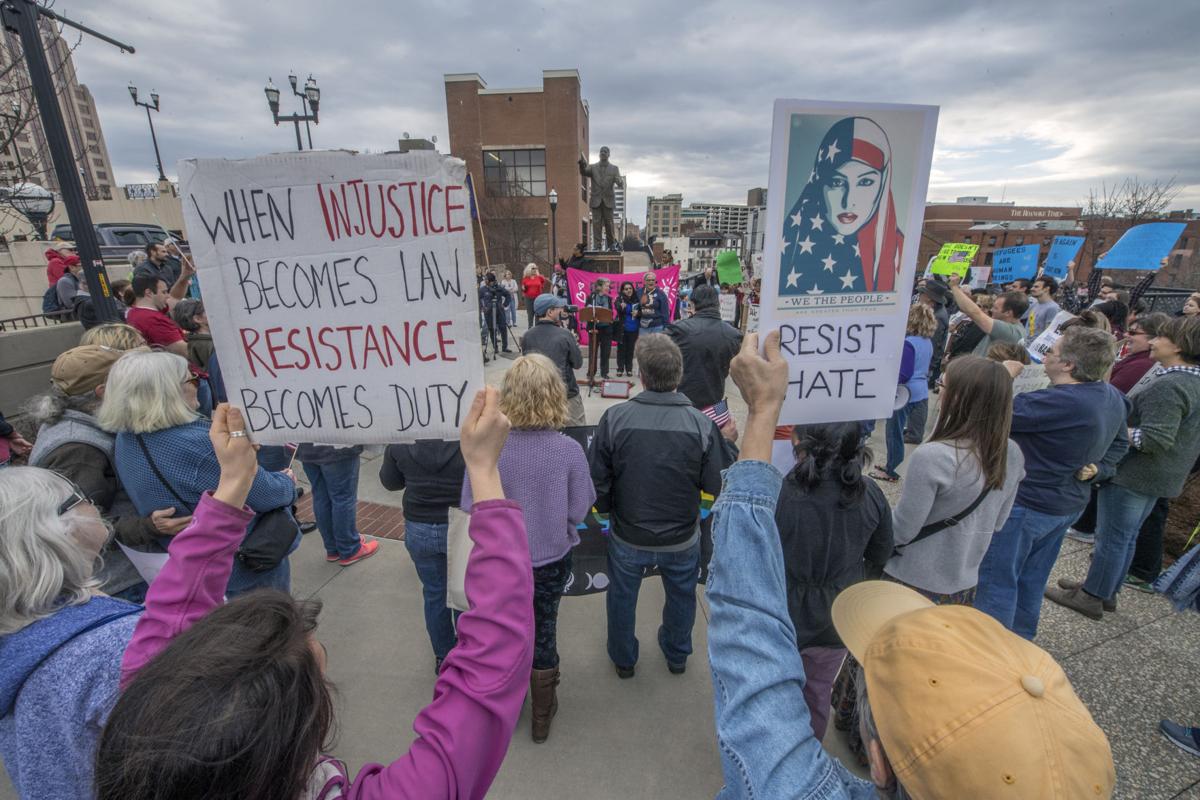 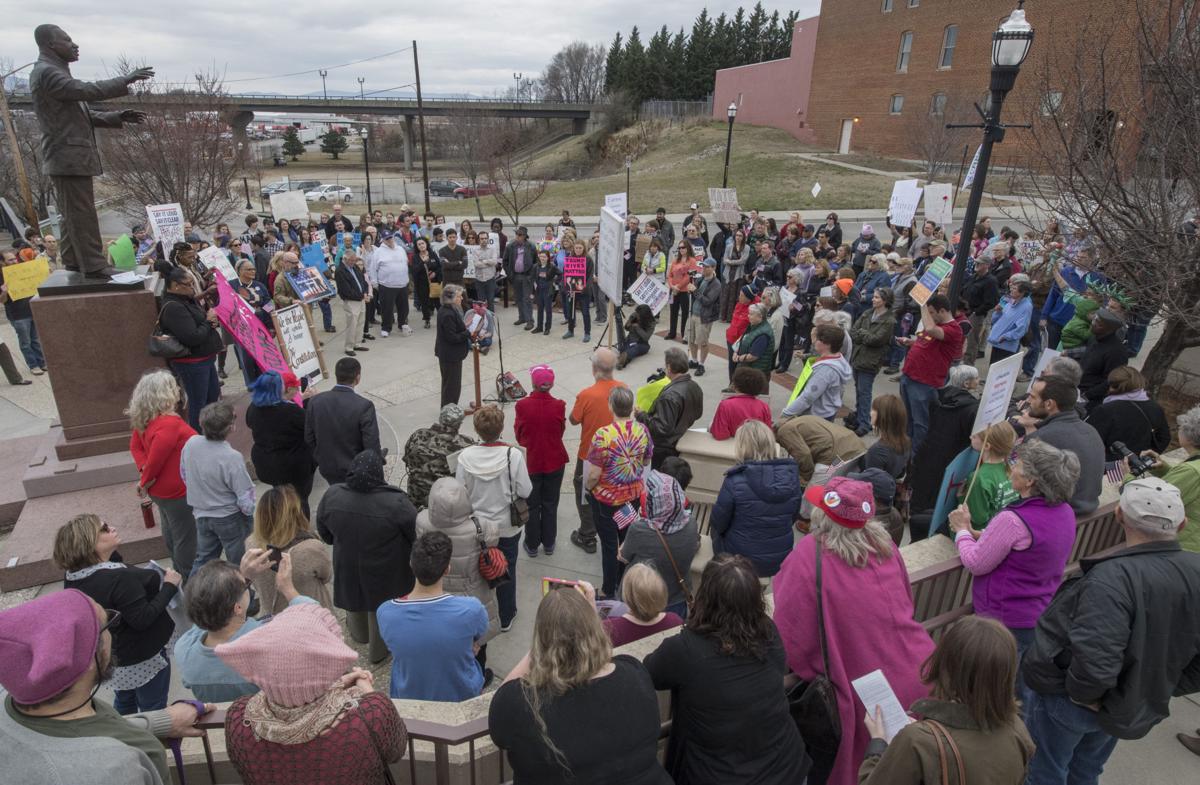 As the crowd hoisting signs proclaiming their support for refugees gathered at the Dr. Martin Luther King Jr. Memorial Bridge waited for the rally to begin, they started to sing an American classic: “This Land is Your Land.”

The sentiment was there, but for some, the words were not. The crowd’s collective voice weakened a bit after the chorus passed, and they approached the lesser-known verses. But Rob Shepard knew the words. As the other voices softened, his continued to boom.

He carried them through the end of the song, and treated the crowd to an encore with “The House I Live In,” a song that asks “What is America to me?”

Roanokers turned out Saturday to show their support for refugees in the wake of President Donald Trump’s executive order banning refugees and citizens from seven majority-Muslim countries from entering the country. The ban has faced legal challenges, and on Thursday, a federal appeals court unanimously refused to reinstate the order.

Saturday’s rally was organized by Sana Hasan, who originally came to America in 1996 as a Kurdish refugee. Her family was among the hundreds of Kurds with connections to U.S. aid groups fearing reprisal from President Saddam Hussein who were brought first to Guam, then to the United States. Hasan became a U.S. citizen in 2013.

When protests erupted at airports around the country following Trump’s executive order, Hasan though to herself, “Why not here?” She organized Saturday’s rally, which included numerous speakers such as state Sen. John Edwards and Del. Sam Rasoul, in just a week.

Hasan said she’s been saddened by what she’s seen in the news lately. She’s speaking out not just for herself, but for people who can’t or are afraid to do so, Hasan said.

Edwards drew inspiration from one of the signs in the crowd, reading “Immigrants are all God’s children.”

When Edwards mentioned Thursday’s court ruling and Virginia’s legal action against the ban, he was met with cheers.

Roanoke NAACP President Brenda Hale said most Americans are the descendants of immigrants. She spoke about her own ancestry, beginning with her great-great-grandmother who was brought to the United States as a slave from Africa at five years old.

Hale, decked out in camouflage, said the people would have to fight for equality.

Standing before a monument honoring the civil rights leader, Rasoul said he felt there were several things Dr. Martin Luther King Jr. would say if he were here today.

“He would, as a preacher, remind us that in the Old Testament, that God created man out of every color of dust, not just one color,” he said. “Martin Luther King would tell us also that we can only drive out hate and fear with love and compassion. We can’t drive out the darkness with darkness.”

Rasoul said he was proud to be alongside the group, joining them in their fight for justice.

No thought is being given to what will happen to the people the United States turns away, she said.

Catherine Koebel came to the rally dressed as Lady Liberty. Though she originally bought the costume for last month’s women’s march, she said it seemed much more appropriate for Saturday’s event.

“Right now, our democracy is in peril, but we have the opportunity to renew it,” she said.

She’s heartened to see people putting in the work and taking the steps to do so, whether by deciding to run for office or turning out for a rally at the Dr. Martin Luther King Jr. Memorial Bridge in Roanoke.

Roanokers gather to rally for refugees