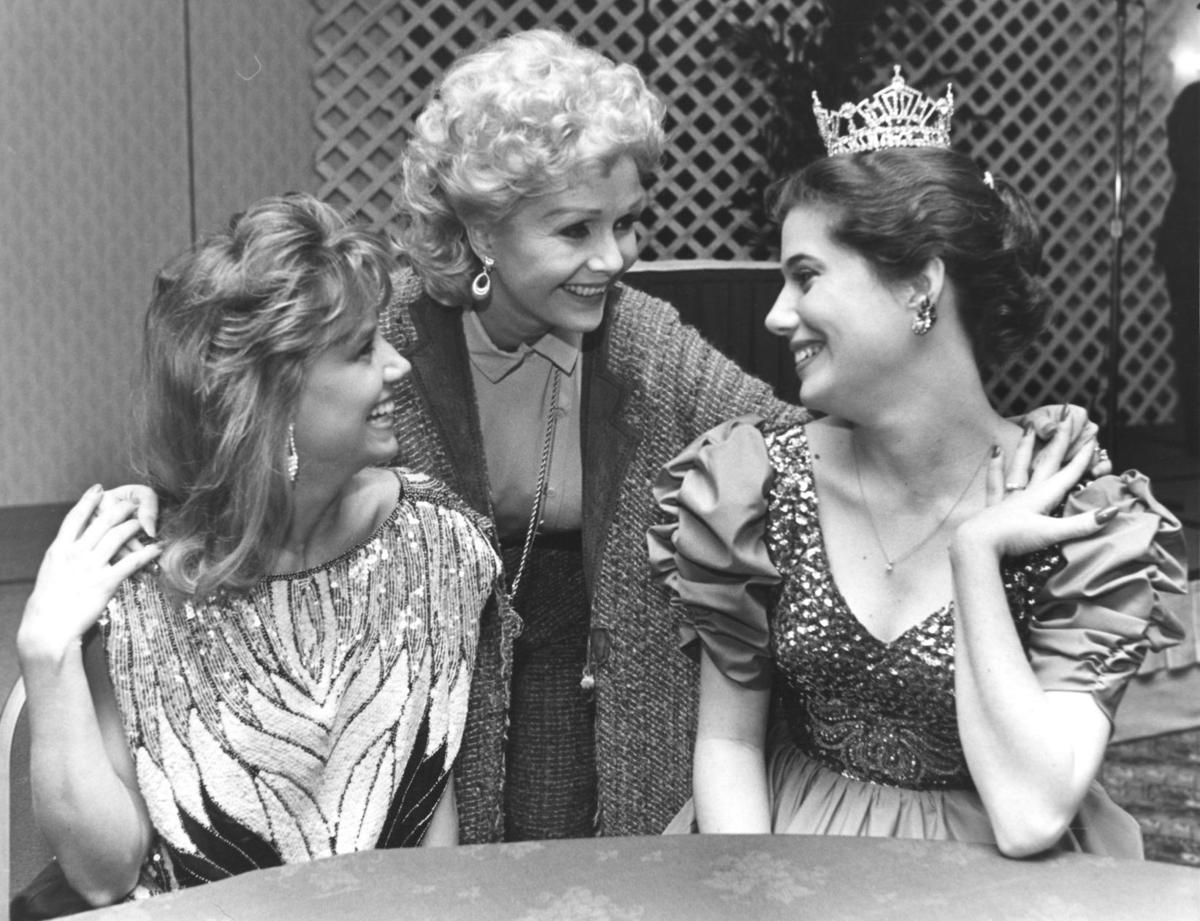 Debbie Reynolds attends a charity auction in Roanoke benefiting the United Way of the Roanoke Valley in the mid-1980s. Pictured with her are then Miss Virginia Susan Parker and former Miss Virginia Lisa Aliff. 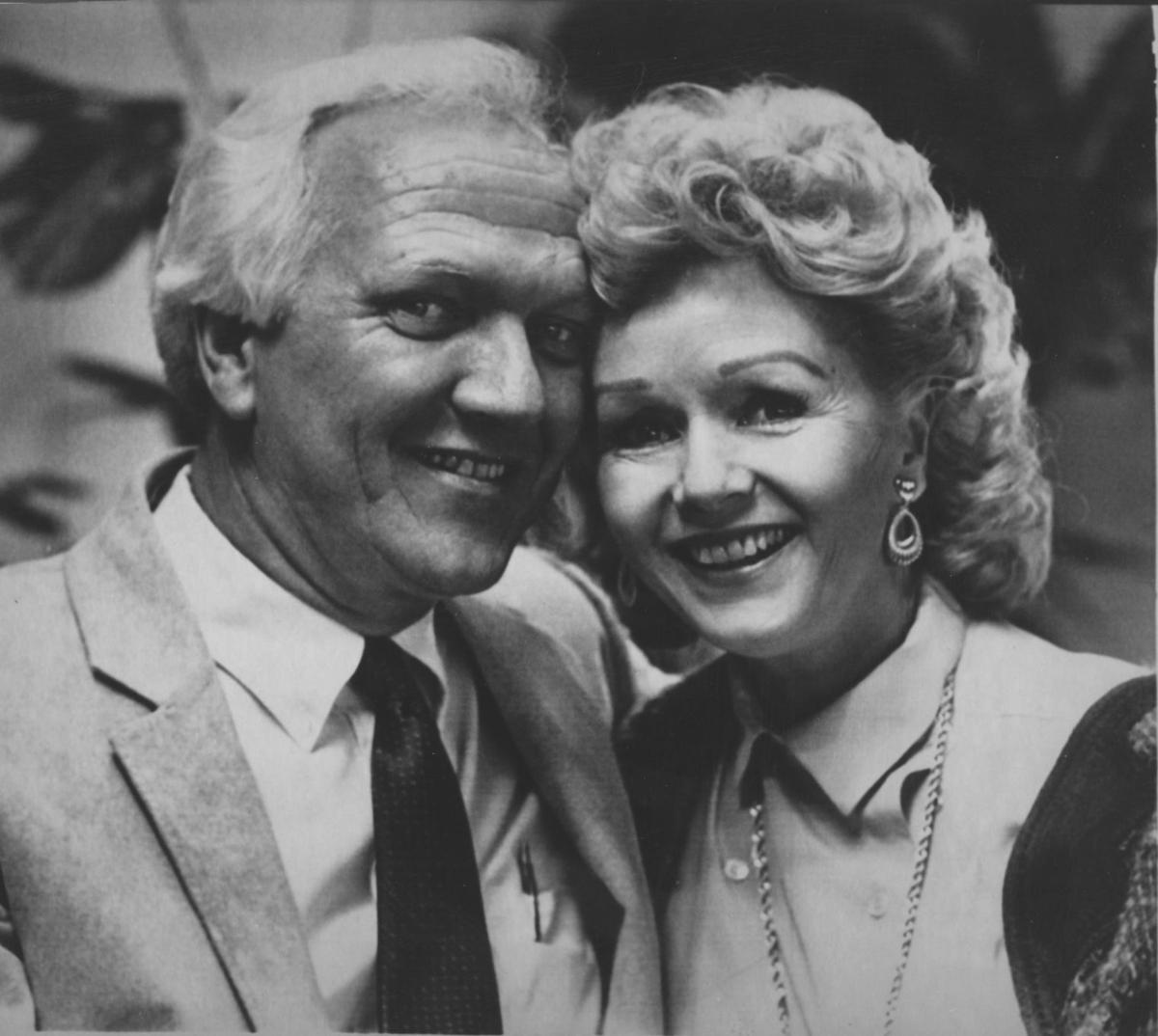 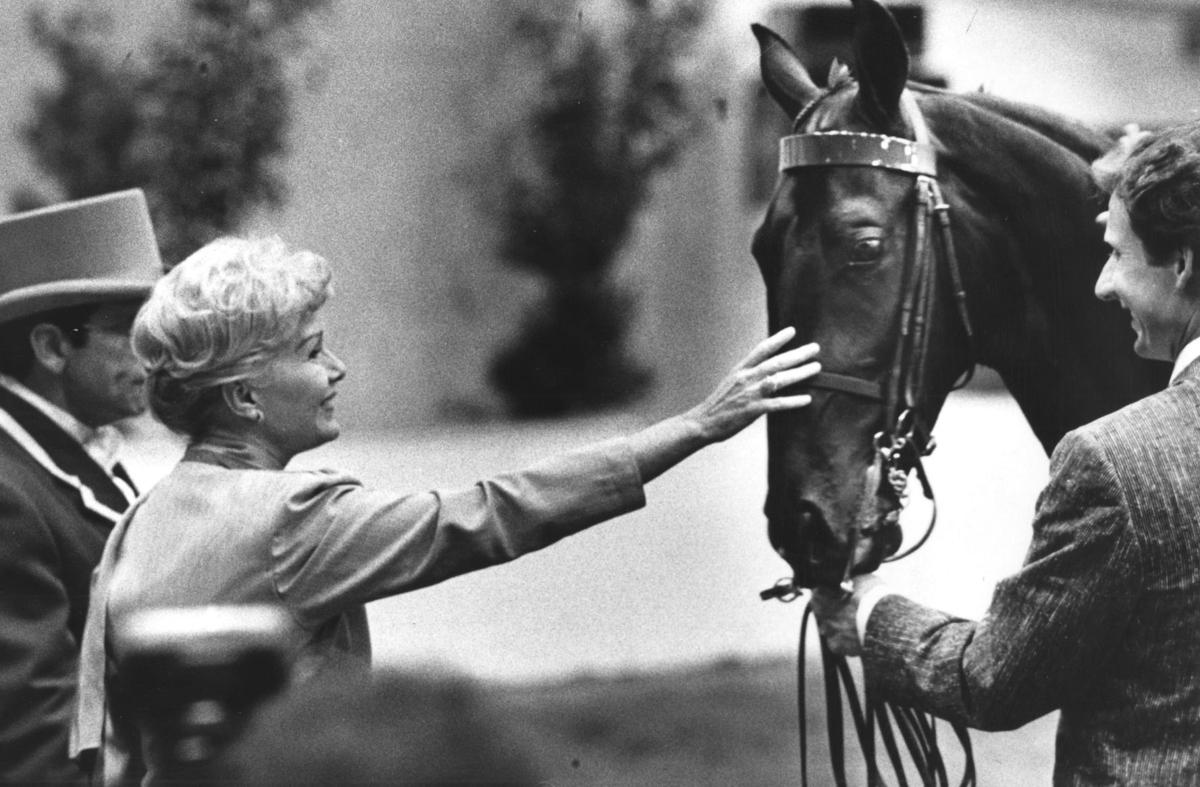 Debbie Reynolds pets After VI, who was presented to the actress at the 1984 Roanoke Valley Horse Show in Salem as a gift from Bent Tree Farms in Shawsville. 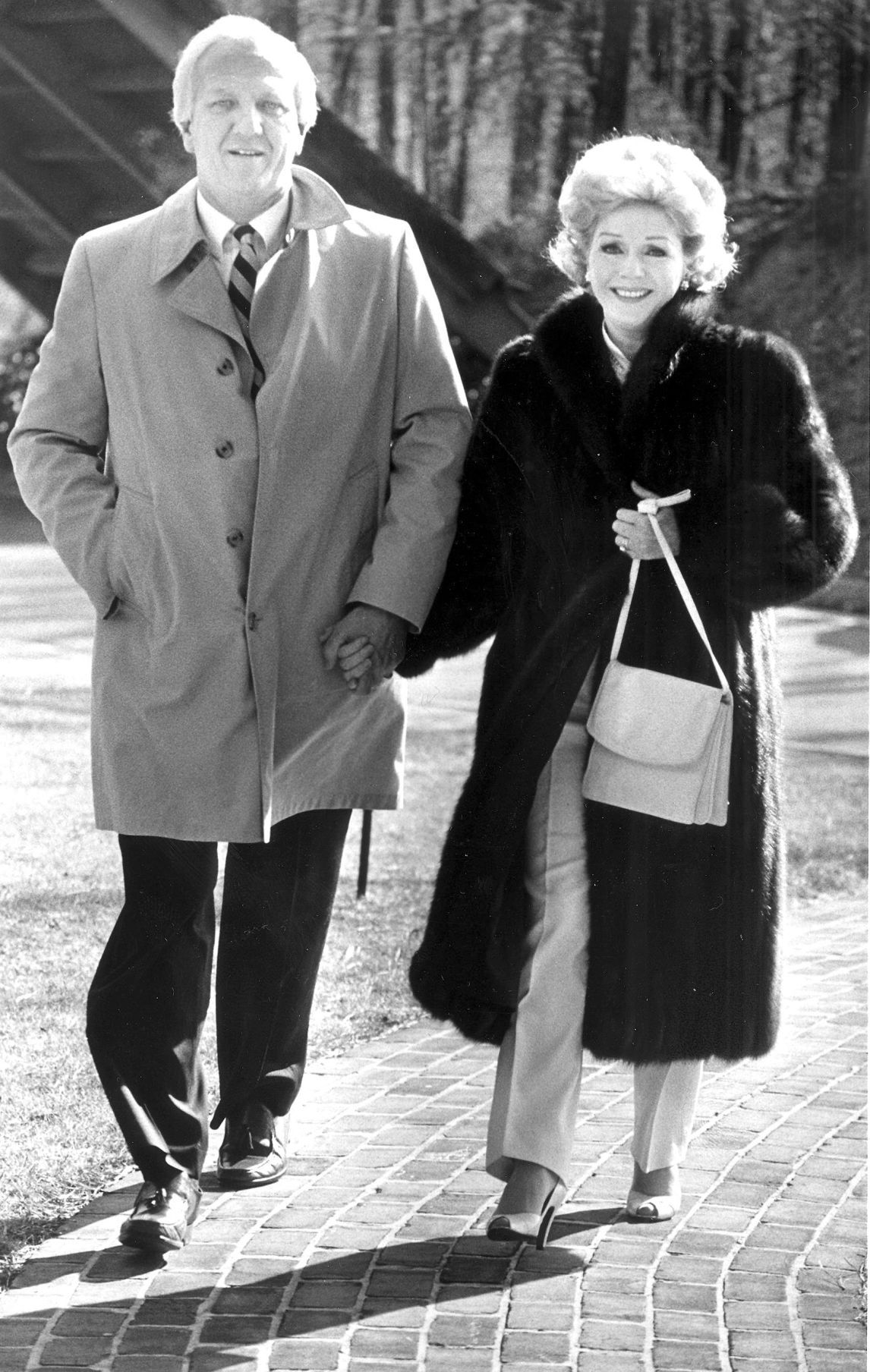 Roanoke native Richard Hamlett and Debbie Reynolds in Roanoke. They were married from 1984 to 1996. 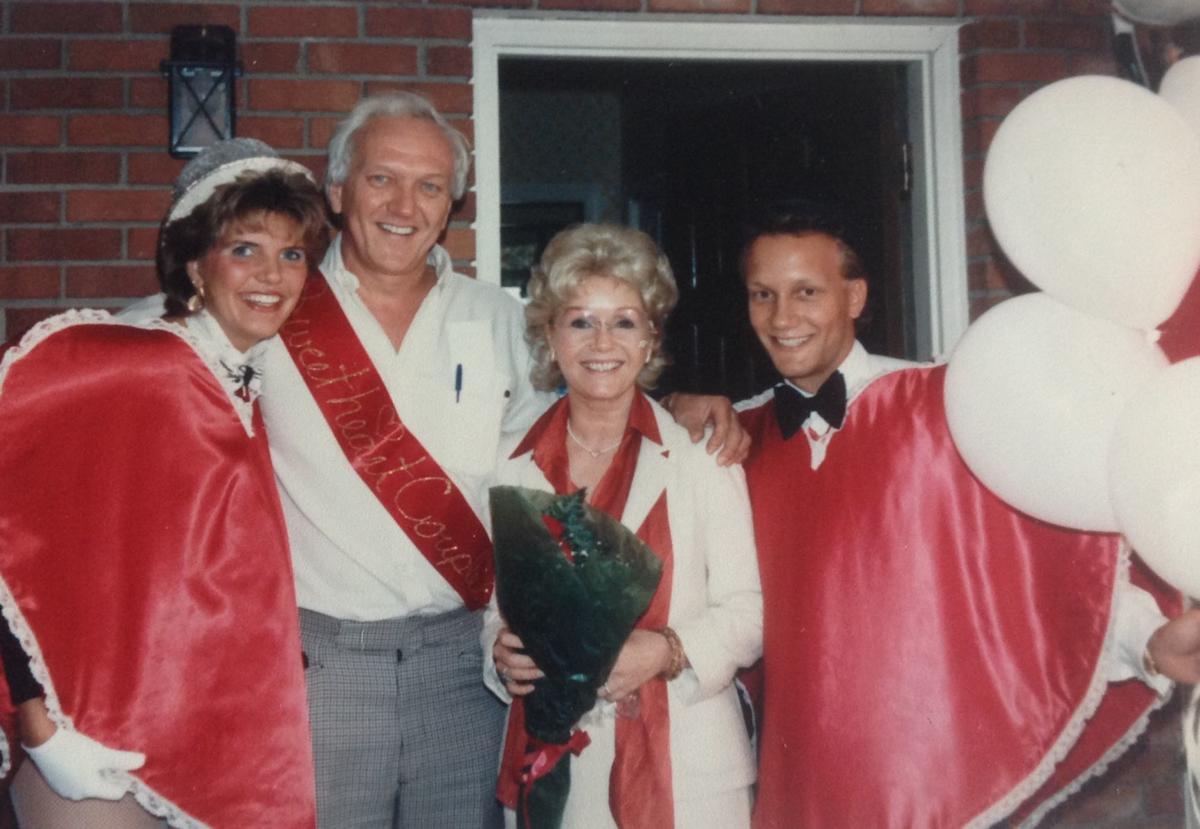 Bill Arnold went out on a grocery run and had a run-in with a movie star.

As he rounded the end of the Mick-or-Mack aisle, there stood Debbie Reynolds, her hair in curlers and covered with a scarf.

Arnold introduced himself. “Welcome to Roanoke,” he said. “I hope you will enjoy your stay here.”

She rewarded him with her silver screen smile. “With people like you here, I’m sure I will,” she said.

Their conversation took place in the mid-1980s, not long after Reynolds moved to the Roanoke Valley. While married to her third husband, real estate developer Richard Hamlett, she lived part time in a house in Roanoke County, becoming a second star on a hill for the Star City.

Though that marriage ended in the mid-1990s, Reynolds’ death on Dec. 28 at age 84 struck a chord with people in the Roanoke Valley who remember her time here. That her death came a day after that of her 60-year-old daughter, actress Carrie Fisher, made the news especially poignant. Friday, their remains will be buried in a joint funeral service in Hollywood Hills.

Fisher, who portrayed Princess Leia in the “Star Wars” film franchise, had a powerful, loving, and at times contentious bond with her show business royalty mother, explored in the 1990 film “Postcards from the Edge,” based on Fisher’s autobiographical novel, and in the documentary “Bright Lights: Starring Carrie Fisher and Debbie Reynolds,” premiering Saturday on HBO.

Roanoke artist Jim Burtch got to see that bond in action. His father, the late Bill Burtch, ran Marizel’s Flowers in Salem.

“I remember delivering flowers on Mother’s Day for my Dad one time back in the late ’80s,” Jim Burtch wrote. “In the floral industry, it’s the busiest day of the year, and I was loaded down with about 17 pieces and that was only the beginning.”

His father insisted on personally packing one particular arrangement in the van. “It was a giant expensive monster of an arrangement with just ‘Mother’ written on the envelope and the address. He placed it next to the driver’s seat and told me to deliver it first.”

The detour up a southwest Roanoke County mountain wasn’t a convenient first stop along the way, but Burtch followed his dad’s orders. Arriving at a “gaudy palatial estate,” he knocked on the door.

“Who ends up opening the door but Debbie Reynolds! She was still dressed in her morning jam jams and a robe. Being a fan of old movies, I was a bit starstruck because I knew who she was. She seemed excited and opened the card right in front of me. The flowers were from her daughter, Carrie Fisher. ‘Oh wow,’ I thought, ‘Princess Leia!’ ”

Reynolds called him darling and told him to wait a second, returning with a $40 tip. “It made that stressed, crazy day a lot easier,” Burtch said.

Those who crossed Reynolds’ path often found her gregarious and giving.

Elliston resident Karen Taylor remembered how a day working at the Salem branch of the Bank of Shawsville contained a pleasant surprise. Reynolds’ husband, Hamlett, was a customer at the bank, and arranged for a visit from Reynolds while the bank was closed, so the employees could meet her.

“She was very easy to talk to and very down to earth,” Taylor wrote. “She had an upcoming performance at the Roanoke Civic Center auditorium and gave us tickets to the performance. I was able to attend with my father. We enjoyed it very much!”

Hamlett and Reynolds divorced acrimoniously in 1996, but encounters in the early 1980s provide evidence of happier times for the couple. Reached by phone last month, Hamlett declined to comment, asserting his side of the story can be found in his self-published book, “My Life with Debbie Reynolds.”

The couple met in Nevada. When Hamlett proposed, he gave Reynolds a diamond ring purchased in Roanoke.

As Geoffrey Jennings explained, Hamlett discussed the ring with his father, Hal Jennings. Both of the Jenningses worked at the family business, Frank L. Moose Jeweler in downtown Roanoke.

“Little did we know at the time that his fiancee was Debbie Reynolds,” Geoffrey Jennings wrote. “The diamond was sent via Fed-Ex to Whitehouse Brothers in Cincinnati, Ohio, to be set in a mounting. We received the completed ring back one day before Richard was to give it to Debbie.”

Later, Reynolds turned up at the store, showing her ring. “She was bubbly and charming and I feel very lucky to have had the opportunity to meet her,” Jennings wrote.

Troutville resident Lee Minnix delivers singing telegrams. In 1984, working for Giggle Gram, she and co-worker Paul Roller delivered one to Reynolds and Hamlett, and she has the smile-filled photo to prove it.

Hotel Roanoke employee Carolyn Willis had an encounter with the couple in 1985 that became a delightful day. Reynolds, with a little dog in tow, was buying a drink as Willis came in the store with her daughters, Willis said.

Willis and Reynolds spoke for an hour. Willis told Reynolds how much she’d loved her performance in the romantic comedy “Tammy and the Bachelor.” Reynolds complimented Willis’s daughters and gave her $50 to treat them to a nice lunch.

“She was a very nice person,” Willis said.

Debbie Reynolds attends a charity auction in Roanoke benefiting the United Way of the Roanoke Valley in the mid-1980s. Pictured with her are then Miss Virginia Susan Parker and former Miss Virginia Lisa Aliff.

Debbie Reynolds pets After VI, who was presented to the actress at the 1984 Roanoke Valley Horse Show in Salem as a gift from Bent Tree Farms in Shawsville.

Roanoke native Richard Hamlett and Debbie Reynolds in Roanoke. They were married from 1984 to 1996.