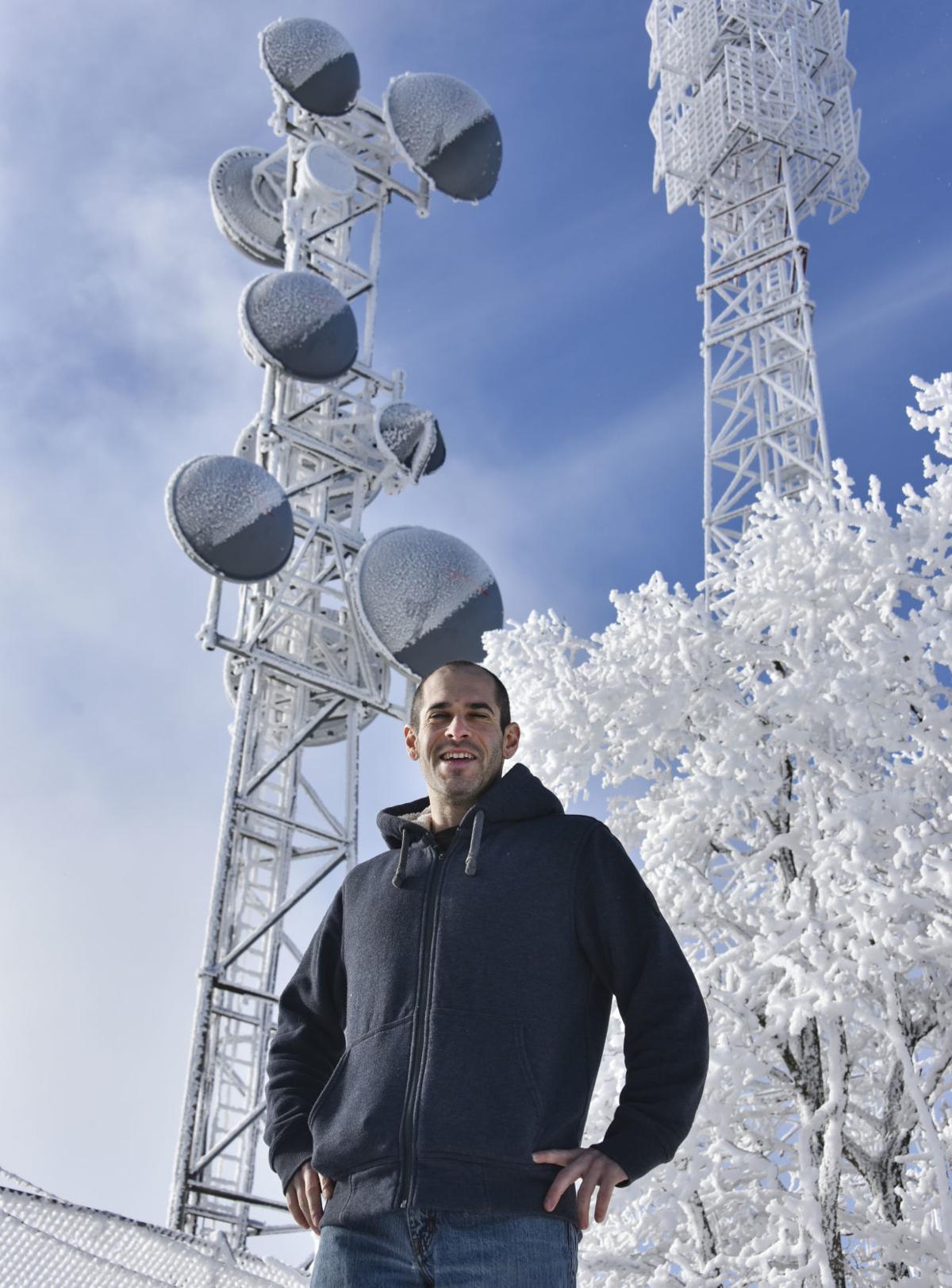 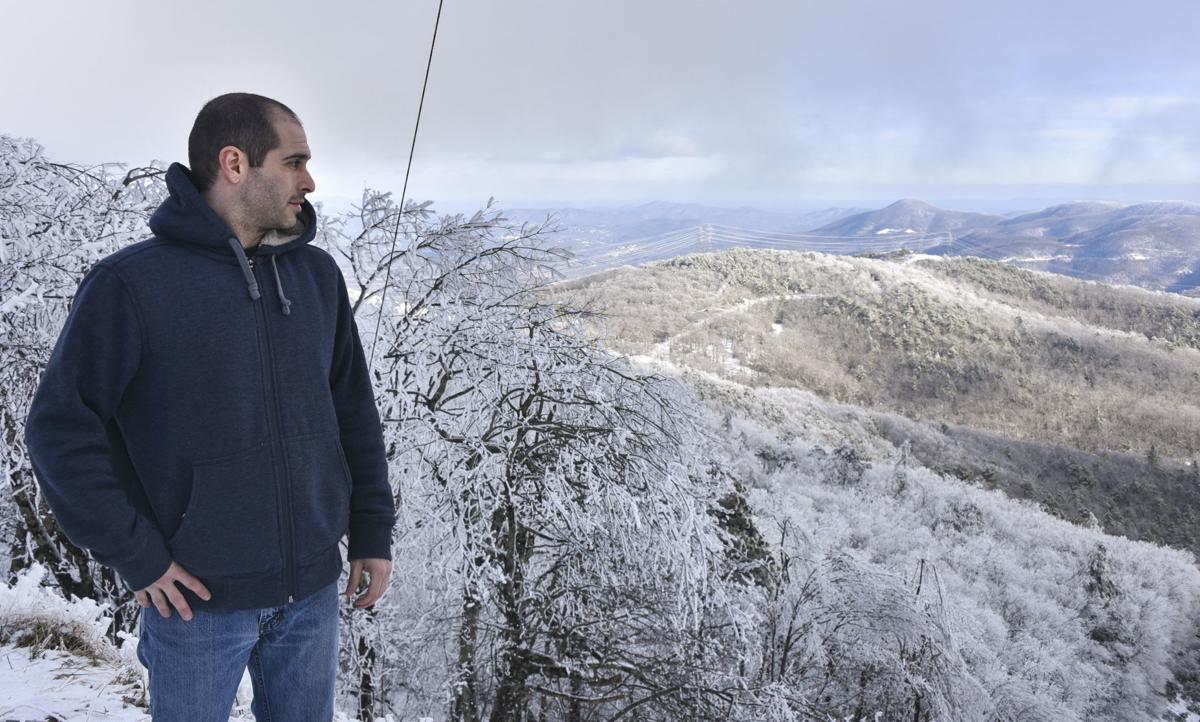 Eathan Gleiner looks down into the Bent Mountain community from the top of Poor Mountain. Growing up in the area, he remembers his family being one of the first with a personal computer — but internet service has always lagged behind.

A Bent Mountain local who felt ignored by the telecom giants has taken things into his own hands and set out on a mission to deliver high-speed internet to his neighbors, many for the first time ever.

It’s something that he says wouldn’t have been possible even a few years ago. But now the financials seem to work out, thanks to a combination of relatively new wireless technology and the government-owned fiber backbone built by the Roanoke Valley Broadband Authority.

Gleiner’s equipment can reach 100 potential customers right now, and his operating costs would be covered if he can get 12 of them signed up. Additional customers will allow MtnNet to expand with more transmitters, a larger coverage zone and — in theory — profits.

For the RVBA, MtnNet represents the first time the region’s taxpayer-funded broadband network will be used to deliver internet to unserved rural homes rather than the business customers it has mostly reached so far.

“We’re getting feedback that he’s a local hero,” RVBA CEO Frank Smith said. “We want to be a catalyst for innovation in the area. We want entrepreneurs, like Eathan and other folks, to be able to take advantage of the technology.”

Gleiner, 35, previously worked as an IT specialist for a large Burger King franchisee, but this kind of business venture will be his first. He’s working on the project in his spare time for now, but he may go full time in the future.

The learning curve has already been steeper than he imagined. He has had to clear technical hurdles to deliver high-speed internet where it has never gone before while also figuring out the business side of the venture.

“Some parts have been — actually, no,” Gleiner said, cutting himself off. “It’s been harder than I expected now that I think about it.”

He plans to partner with the RVBA and rent space on the municipal fiber already in the ground in order to get as close to Bent Mountain as possible. This will serve as the required backbone for his entire business.

Then MtnNet will beam the signal wirelessly less than 10 miles up to a tower atop Poor Mountain. That tower, in turn, will transmit connections down to receivers mounted on the outside of customers’ homes.

For now, his experiments show he’s able to reach about 100 homes within a few miles of his only transmitter west of Bent Mountain Road.

If things go well, he’ll set up more towers with the goal of eventually reaching every home on Bent Mountain.

Wireless technology has come a long way in recent years, as industry giants like Microsoft increasingly look to the airwaves to help fix the rural broadband gap. It’s expensive to run wireline connections to every home in places with low population density, but newer wireless technologies can now deliver broadband-style speeds for cheaper.

The technology does have its shortcomings. Customers have to be within about 10 miles of MtnNet’s transmitter, and even then there are dead zones. Obstacles, such as a mountain top, can block the signal altogether.

Gleiner recently hooked up his first user, finishing the install only to find a tree disrupting the connection. He moved the receiver to a different part of the house, where, he said, things have worked well since.

For price comparison, Xfinity advertises a variety of packages in nearby Blacksburg, including 15 mbps connections for $49.95 per month.

The Bent Mountain area has long struggled with some of the slowest internet speeds in the region, with many homes left with no option except satellite.

Gleiner is all too familiar with the technology gap, as he grew up on the mountain. His family was one of the first he knew with a personal computer, but internet connections have lagged for as long as he can remember.

He has a decent connection at his house today, but he says it runs out just a little farther down his road.

Mike Mills, Gleiner’s longtime neighbor and MtnNet’s first test customer, said he was previously paying Verizon more than $60 per month for a 1 mbps internet connect and the landline telephone service the company required.

He said the connection cut out frequently, Netflix movies were often too pixelated to watch, and everyone in the house had to disconnect whenever someone checked email.

Mills runs a landscaping business from his home. He said he knows he’s lost customers over dropped connections.

After he joined MtnNet last week, Mills said, he was streaming high definition movies at home. The connection has run uninterrupted for about a week, even through an ice storm.

“We’re just kind of stuck,” Mills said, noting it doesn’t seem like any of the bigger internet service providers plan to invest in their networks where the population density is so low.

“So when he [Eathan] said he was going to do this, it was like, ‘Great. Maybe we can actually join the technological revolution here.’ ”

Smith, of the RVBA, said the municipal network he operates was initially designed to serve business customers.

But part of the group’s mission all along has been to make it possible for new internet service providers to move into the market, compete and deliver faster speeds at lower costs — especially where it hasn’t been available in the past.

“That’s exactly what Eathan is doing,” Smith said. “He’s taking a community that is really under served and answering the call, making the investment and taking the risk.”

Roanoke County launched a broadband survey to pinpoint pockets of the county that are unserved or underserved by internet providers.

Eathan Gleiner looks down into the Bent Mountain community from the top of Poor Mountain. Growing up in the area, he remembers his family being one of the first with a personal computer — but internet service has always lagged behind.