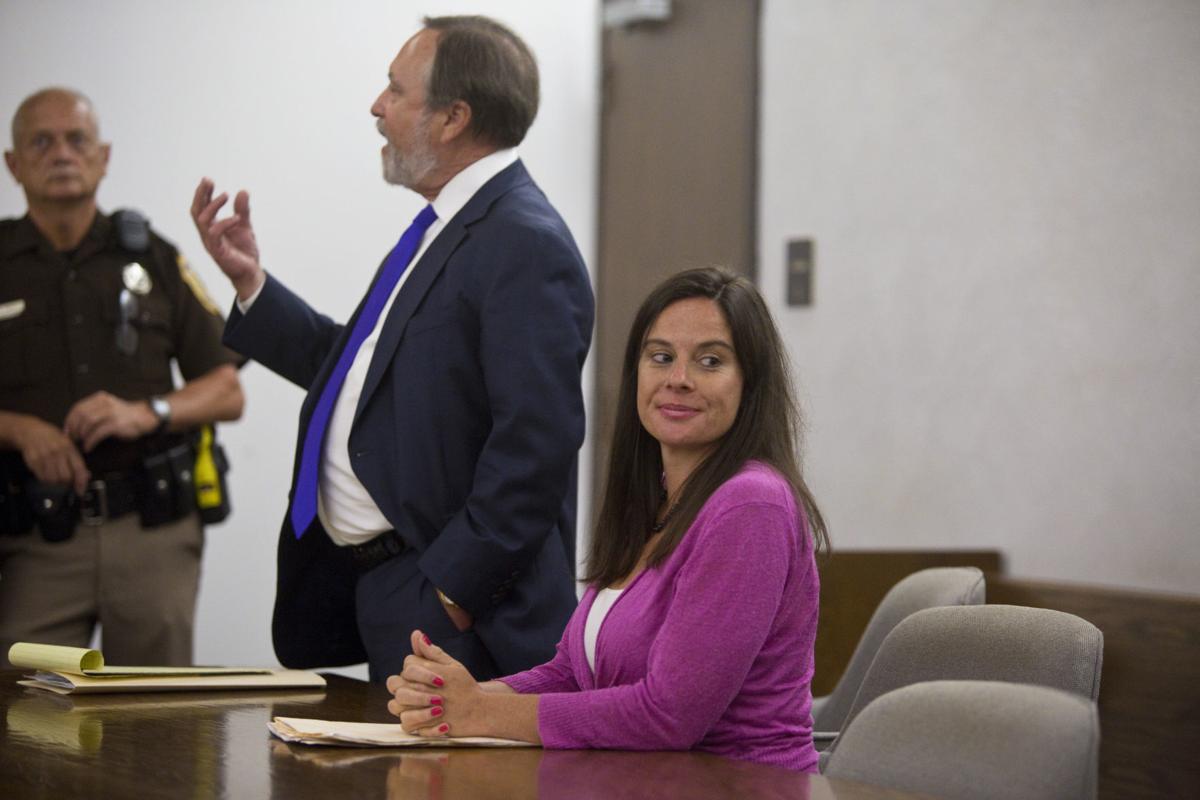 Stephanie Stallings Davis smiles at some of her supporters while her attorney, Jonathan Rogers, speaks during her hearing in the Roanoke County General District Court on Wednesday morning. She was arrested April 11 and charged with entering property belonging to Mountain Valley with the intent to damage it. The charge was dropped Wednesday. 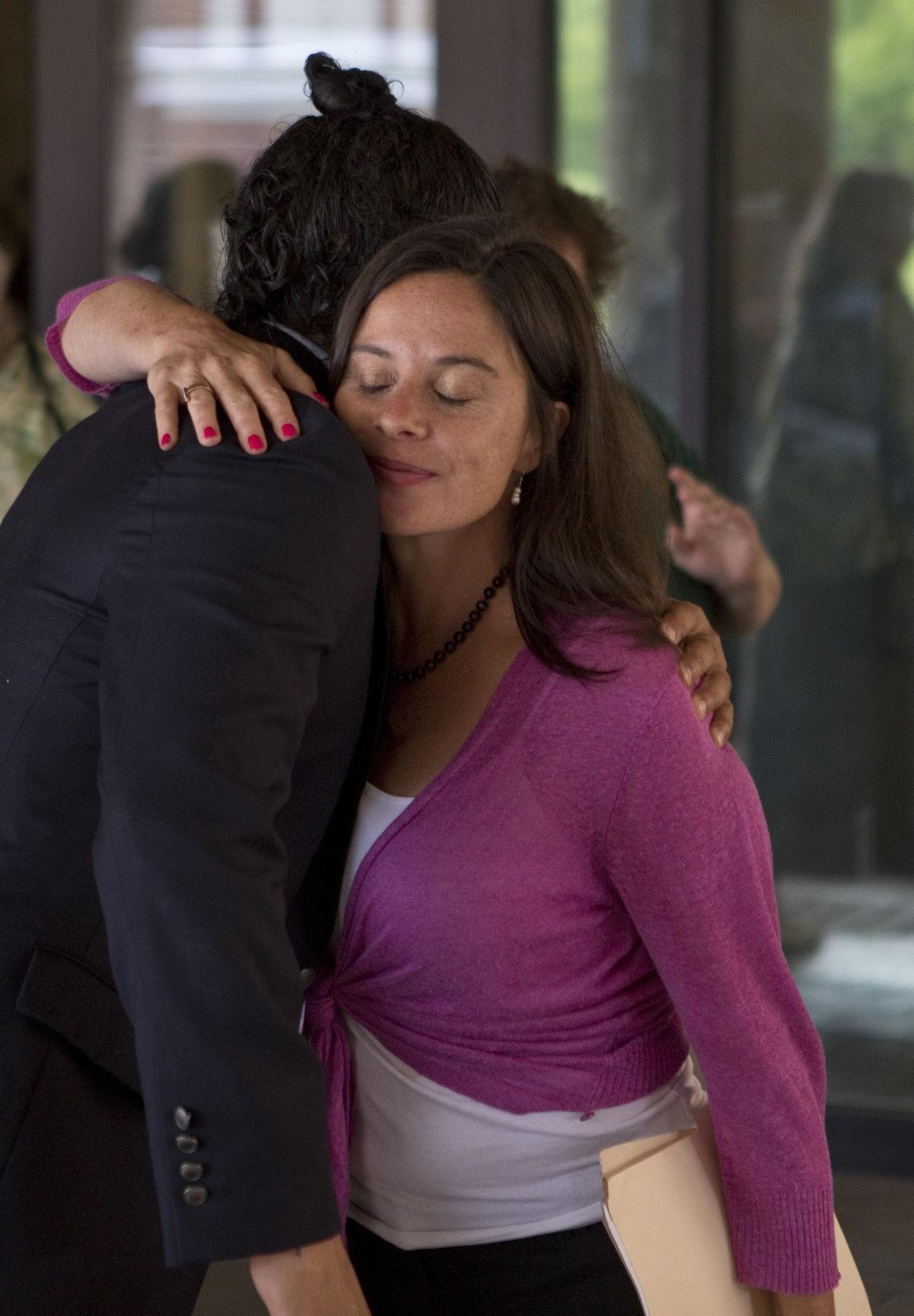 Stephanie Stallings Davis hugs one of her supporters after her hearing in the Roanoke County General District Court on Wednesday morning. A charge against her related to her protest against the pipeline was dropped. 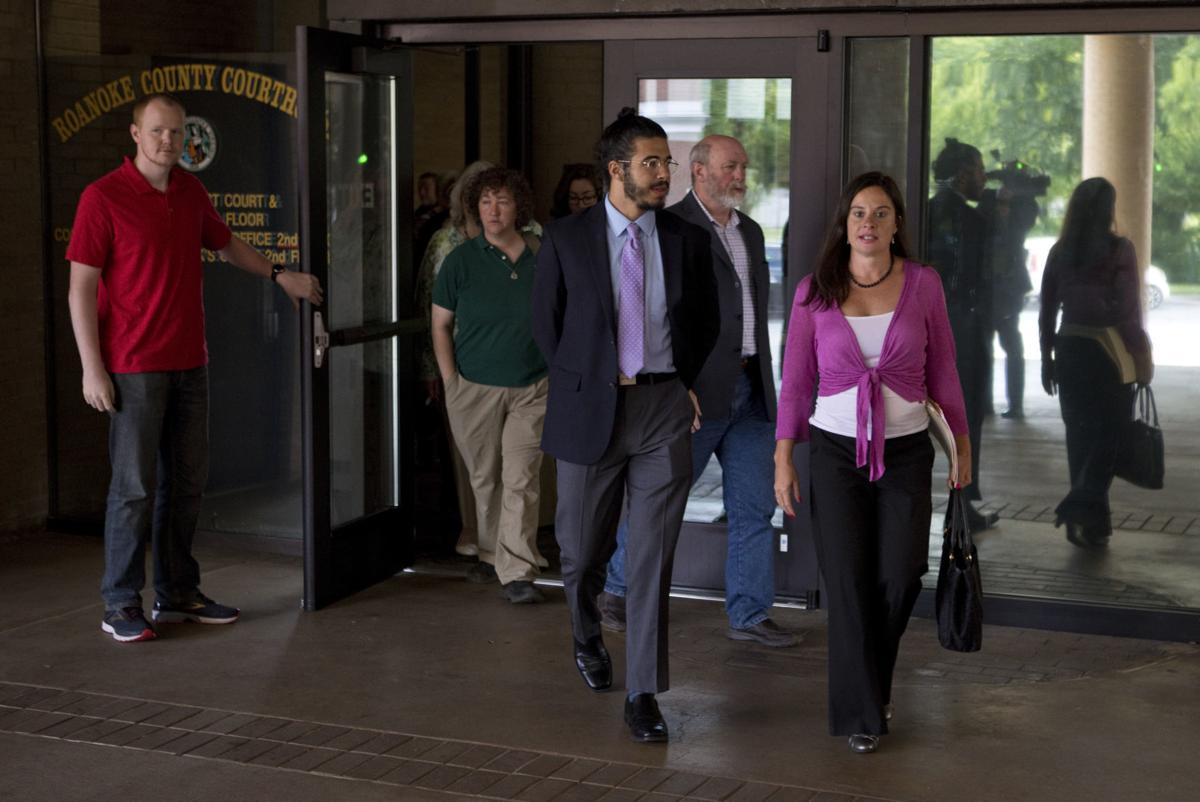 Stephanie Stallings Davis walks out of the Roanoke County General District Court on Wednesday. A charge filed against her on April 11 in connection with her keeping a vigil against the pipeline construction on Bent Mountain was dropped Wednesday. 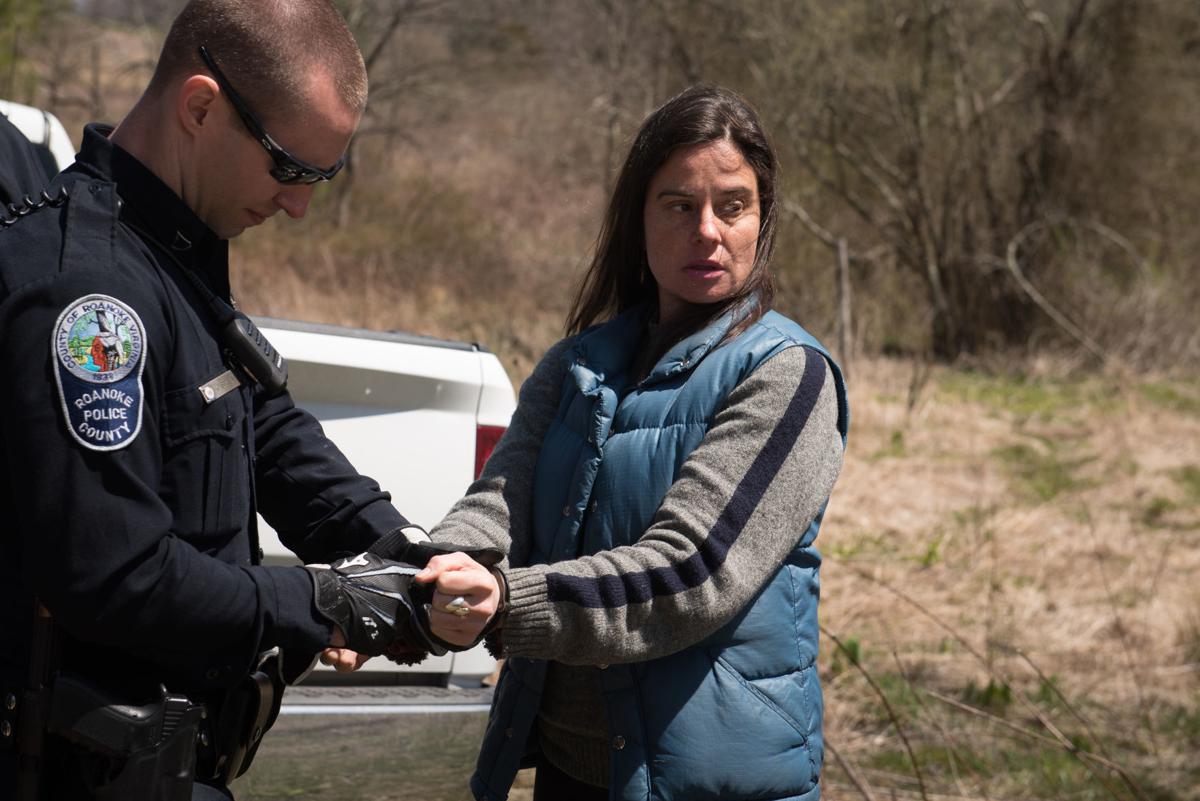 Since work on the Mountain Valley Pipeline began, opponents from all walks of life — including a Virginia Tech professor, a former candidate for the Roanoke City Council, a substance abuse counselor, a speech pathologist, a local artist and a Harvard University graduate — have been charged with a variety of non-violent misdemeanor offenses.

More than 20 activists have been arrested or given citations for occupying tree stands that blocked the pipeline’s route, attempting to provide food and water to a protester on an elevated platform in the Jefferson National Forest and sometimes for simply standing too close to the pipeline right of way while they shadow construction crews.

In one of the first cases to go to court, a charge was dropped Wednesday against Stephanie Stallings Davis.

On April 11, Roanoke County police arrested Davis along the pipeline’s right of way on Bent Mountain and charged her with entering the property of Mountain Valley with the intent to damage or impede work on the 125-foot wide construction easement.

Although prosecutors said they were not ready to try the case, it was unclear if they will bring charges a second time.

“It was important to me that I take a stand … to protect our water, our land and our rights as citizens,” Davis, 38, of Floyd County, said as she left the courthouse.

“We will not stand down.”

The resistance has been likened to the non-violent tactics employed during the civil rights movement of the 1950s and 1960s.

Just as those advocating equal rights for blacks saw fit to break unjust laws of the Jim Crow era, the argument goes, pipeline opponents are being arrested for resisting laws allowing a project that they say will ruin individual lives and the environment at large.

“The suffering of one is the suffering of all,” Katie Zawacki, chair of the nonprofit Points of Diversity, said during a rally Tuesday next to Roanoke’s statue of Martin Luther King Jr.

About 50 people attending the rally heard multiple complaints, including how the natural gas pipeline will damage Native American artifacts in its path and how peaceful protesters have been monitored by local police with the assistance of anti-terrorism agencies.

“There are no terrorists here,” Zawacki said. “In many ways, this entire scene seems surreal to us.”

A key goal of the rally was to back pipeline protesters charged with crimes and encourage supporters to attend their trials.

About 20 people showed up Wednesday in Roanoke County General District Court, where prosecutor Beth Oates said she was not ready to proceed and requested a continuance. After Judge Jacqueline Talevi denied the last-minute request for a delay, Oates asked that the charge be dropped.

It was not clear if Oates will reinstate the charge, as allowed by state law under the circumstances. The assistant commonwealth’s attorney did not return a call following the hearing.

Davis is “totally innocent of the charges if they look into the facts,” defense attorney Jonathan Rogers said.

Witnesses for the defense were expected to testify that Davis and other protesters never entered a 125-foot-wide strip designated for tree cutting, and that they had the permission of the property owner to stand at a nearby spot in their vigil against the pipeline. Mountain Valley officials called police to the scene, complaining that the protesters were standing in their way of felling trees.

It was one of countless standoffs that have played out since Mountain Valley began work on a 303-mile buried pipeline that will transport natural gas at high pressure from northern West Virginia through the New River and Roanoke valleys.

Earlier in the week, three protesters were arrested in Monroe County, West Virginia, after they chained themselves to construction equipment in an effort to stop crews from boring a tunnel that would allow the pipeline to pass under a highway.

At a work site where the pipeline will cross under U.S. 219 near Lindside, construction crews arrived Monday morning to find a man and two women from Massachusetts who had chained their hands to heavy equipment.

The human blockade involved “a type of improvised piping that did not allow direct access to their hands and prevented their immediate removal,” state police said in a news release. After several hours, police detected nylon straps inside the pipes through with the protesters had inserted their forearms.

Police were “able to utilize different methods to slip the strap off the wrist which allowed the hands to be freed,” the news release stated.

The trio was charged with trespassing and resisting law enforcement officers. They were released on bond pending court dates in Monroe County Circuit Court.

Stephanie Stallings Davis smiles at some of her supporters while her attorney, Jonathan Rogers, speaks during her hearing in the Roanoke County General District Court on Wednesday morning. She was arrested April 11 and charged with entering property belonging to Mountain Valley with the intent to damage it. The charge was dropped Wednesday.

Stephanie Stallings Davis hugs one of her supporters after her hearing in the Roanoke County General District Court on Wednesday morning. A charge against her related to her protest against the pipeline was dropped.

Stephanie Stallings Davis walks out of the Roanoke County General District Court on Wednesday. A charge filed against her on April 11 in connection with her keeping a vigil against the pipeline construction on Bent Mountain was dropped Wednesday.