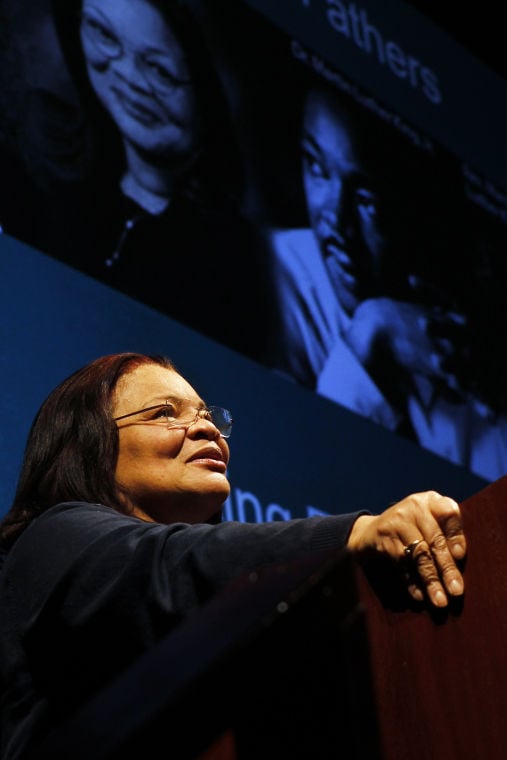 Alveda King, a niece of the Rev. Martin Luther King Jr., speaks Monday at Roanoke College in Salem. The topic of her speech was “How Can We Keep the Dream Alive? Social Equality in the 21st Century,” spending much of the time speaking against abortion. 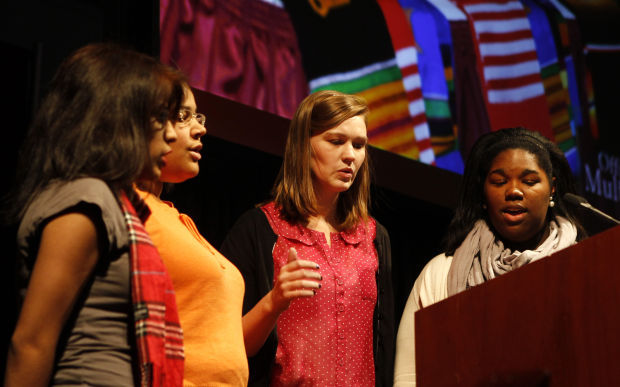 Roanoke College students lead the audience in singing “Lift Every Voice and Sing” at the start of the program featuring Alveda King, the niece of the Rev. Martin Luther King Jr. 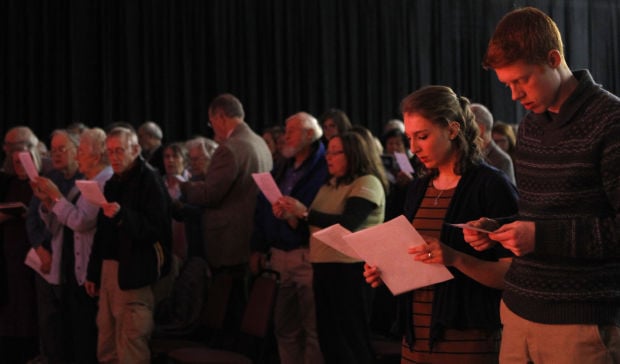 Members of the audience sing “Lift Every Voice and Sing,” by James Weldon Johnson, before Alveda King took the stage Monday to speak at Roanoke College in Salem.

Alveda King did not shy away from controversy, whether she was answering questions about her stance against abortion rights, discussing her thoughts on “sexual perversion” or discussing her own heroic family.

The niece of the Rev. Martin Luther King Jr. spoke to a crowd of nearly 400 people Monday night at the C. Homer Bast Center at Roanoke College.

Given her family’s legacy, she acknowledged that it was appropriate that she give a speech during Black History Month, but she also noted that she was on campus at the invitation of several campus and religious groups, which included Students for Life, a club whose mission, according to the Roanoke College website, is “to save lives threatened by induced abortion, euthanasia, and the destruction of human embryos for research.”

King, 63, spent much of her 65-minute presentation talking about her family, the civil rights movement and her own conversion, as she put it, “from being pro-choice, which I used to be, to pro-life.”

King is the daughter of the Rev. Alfred Daniel Williams King, the older brother of Martin Luther King Jr. Alveda King grew up in the midst of the civil rights movement, during which her father was often by her legendary uncle’s side. Her family’s home in Birmingham, Ala., was bombed in 1963, when she was 12.

She showed a photograph of that bombed house during a PowerPoint presentation that included pictures of her uncle leading the March on Washington and other family photos.

She spoke briefly about the most recent dispute among her cousins, whose differences have often played out in public.

Bernice King, Martin Luther King’s daughter, has claimed that her two brothers, Martin Luther King III and Dexter Scott King, want to sell their father’s Nobel Peace Prize and a personal Bible to a private buyer. The brothers have sued their sister for having “secreted and sequestered” the items.

Alveda King said that the media had hyped her family’s “squabbling” and that her cousins “love each other … [they] just disagree on something.”

The latter part of her speech was devoted to her testimony about becoming a fervent opponent of abortion. She told her personal story of having two abortions more than 30 years ago, one of which was against her will, she said.

“I had bought into the pro-choice [opinion] that a woman has a right to do what she wants to do with her body … and she does,” King said. “But a baby is not her body.”

She served one term in the Georgia House of Representatives as a Democrat and has been a prominent speaker for groups that oppose abortion.

After her speech, King took written questions from the audience and reaffirmed her beliefs about abortion and her opposition to easy access to birth control, which she called “fertility blockers.” She lashed out several times against Planned Parenthood and accused its ostensible founder, Margaret Sanger, “and her gang” of moving abortion clinics into predominantly black neighborhoods in the mid-20th century as a nefarious way of controlling black population.

Martin Luther King Jr., however, was given the Margaret Sanger Award in 1966, a commendation that his niece dismissed as having been due to his wife’s influence and support for abortion rights

When asked if she opposed abortions in the cases of rape or incest, King did not give a direct answer but instead said that she knew of studies that reported that raped women who were impregnated and carried babies to term “had less suicidal tendencies and depression” than similar women who had chosen abortion. She did not cite the source of the studies.

King, who has spoken out against gay marriage in the past, did not specifically address the rights of gays when pressed by a question on Monday, but she made a couple of references to “sexual perversion” during her presentation.

In the end, though, she said that most people “don’t want to hear that all have sinned and fallen short of the glory of God.”

Alveda King, a niece of the Rev. Martin Luther King Jr., speaks Monday at Roanoke College in Salem. The topic of her speech was “How Can We Keep the Dream Alive? Social Equality in the 21st Century,” spending much of the time speaking against abortion.

Roanoke College students lead the audience in singing “Lift Every Voice and Sing” at the start of the program featuring Alveda King, the niece of the Rev. Martin Luther King Jr.

Members of the audience sing “Lift Every Voice and Sing,” by James Weldon Johnson, before Alveda King took the stage Monday to speak at Roanoke College in Salem.