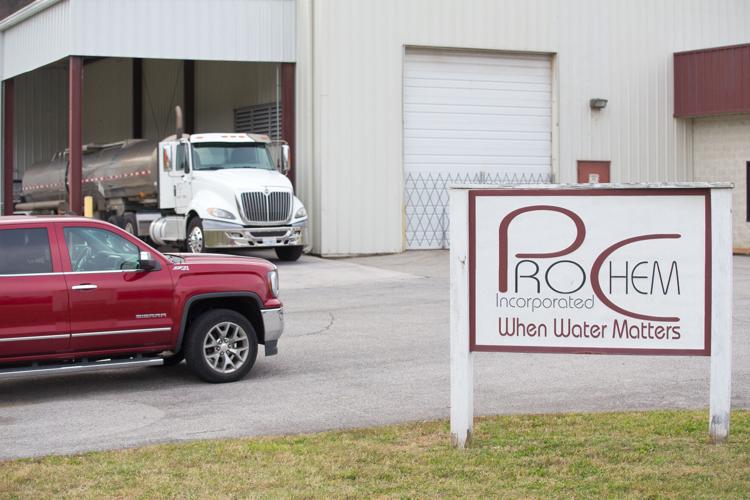 The ProChem building at 5100 Enterprise Drive in Elliston on Thursday. 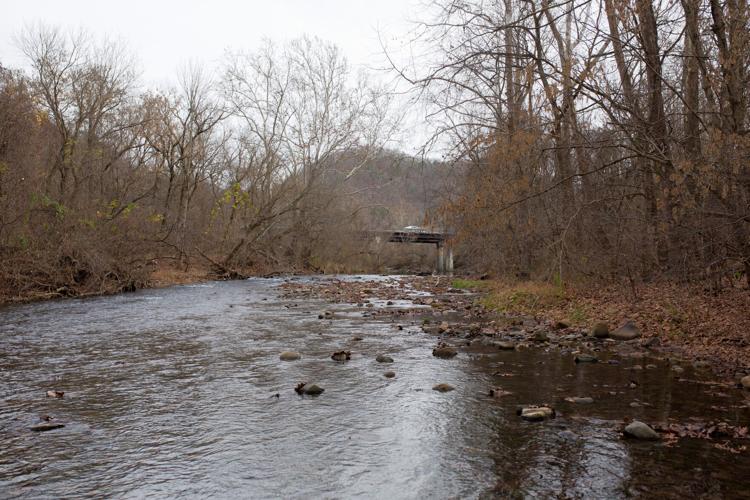 The South Fork Roanoke River across the street from ProChem Inc. 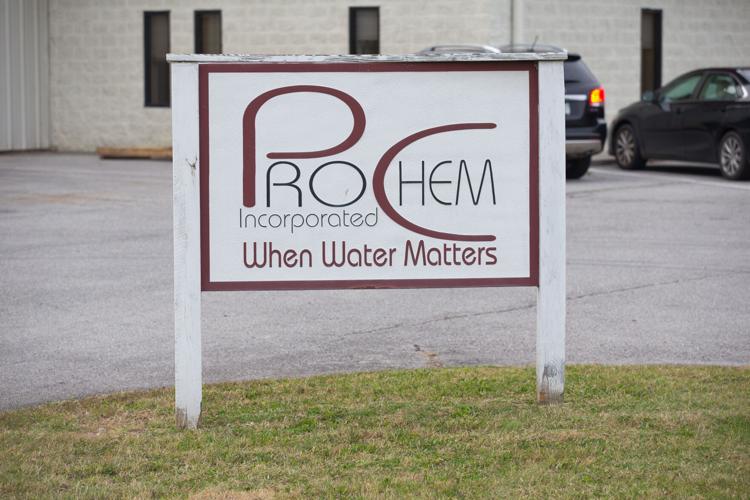 The ProChem building at 5100 Enterprise Drive in Elliston. 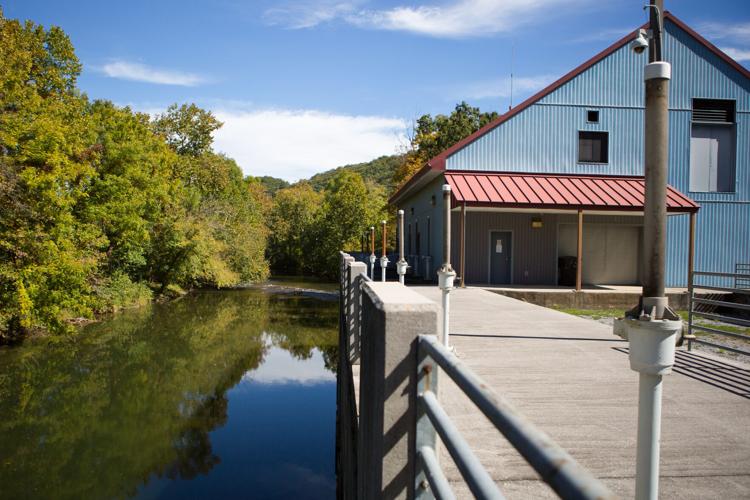 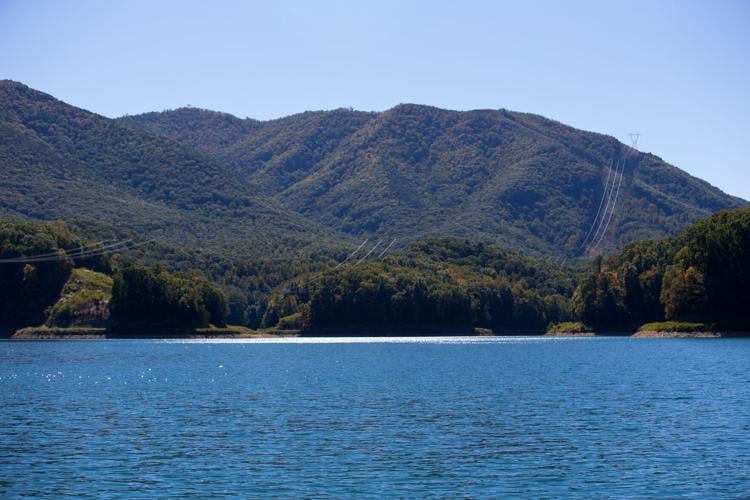 A so-called “forever chemical” detected in the Roanoke River has been traced to a plant in Elliston that services industrial water treatment equipment.

ProChem Inc. has been releasing GenX into wastewater that is treated and discharged into the South Fork of the Roanoke River, according to the Western Virginia Water Authority. From Elliston, the contaminated water has flowed into the Roanoke River, which a short distance downstream supplies water for the Spring Hollow reservoir, a key source of drinking water for the region.

The company said Thursday that it was unaware until recently of the GenX releases, which it says came from the equipment of one of its customers.

Long-term exposure to GenX can cause health problems that include complications to the liver, kidneys and immune system, the U.S. Environmental Protection Agency warns.

Recent tests of wastewater that ProChem released into a sewer system that leads to the Elliston water treatment plant detected levels of GenX at 1.3 million parts per trillion — far more than the 10 parts per trillion threshold recommended by the EPA in a June health advisory.

After the water had been treated and released into the South Fork of the Roanoke River, the level had decreased to 23,900 parts per trillion.

Even at the lower number, “we have never seen a level that high in the Roanoke River,” said Sarah Baumgardner, a spokeswoman for the water authority.

Forever chemicals are currently not regulated by the EPA, and studies on their risk to humans are evolving.

ProChem has been instructed not to service equipment believed to be linked to GenX, the water authority said on its website. Follow-up testing is planned by the authority and the Virginia Department of Environmental Quality.

According to the water authority, ProChem provides a chemical washing process on equipment from a Chemours facility in West Virginia. Chemours is a company that works with industries that include automotive manufacturing, paints, laminates, advanced electronics, construction and telecommunications.

Chemours has been linked to the spread of GenX near Wilmington, North Carolina, among other places.

“We are dismayed that ProChem may have unknowingly contributed to the presence of GenX found in the local water supply,” Kidd said in a written statement.

“We believe this is the result of contaminated units (of which we were unaware) provided by a customer with whom we have discontinued service. We are actively working with the DEQ and the local water authorities to aggressively treat the issue.”

Because GenX is not regulated by the federal or state government, there are currently no requirements for testing. “As a result, routine regulatory testing conducted by ProChem would not indicate the existence of GenX compounds in treated wastewater,” Kidd said.

As soon as it was notified by DEQ of tests that showed high concentrations, ProChem discontinued service to the customer suspected of being the source, which it did not identify. Since then, the company believes that no other forever chemicals have entered its system.

“We also believe current tests will show substantially reduced levels of GenX,” the company said. “We will continue to aggressively treat the issue until levels are below the EPA’s current lifetime health advisory of 10 parts per trillion. This process may take several weeks.”

Most customers of the authority, which serves about 69,000 homes and businesses in the Roanoke Valley, have been receiving water from other sources that tested negative for forever chemicals, such as Carvins Cove.

A water sample was taken Oct. 5 in the area of ProChem. Laboratory testing generally takes about a month before results are known.

Since it learned that it was the source of GenX, ProChem has been conducting frequent monitoring of the water it pumps into the Montgomery County Public Service Authority’s treatment plant in Elliston. It has also starting using a carbon filtering system similar to one currently in use at Spring Hollow.

Forever chemicals do not break down naturally over time. They can repel both oil and water and are widely used in industry and the manufacture of consumer products, including nonstick cookwear, waterproof clothing, fast food containers, upholstery and carpets.

GenX is the trade name for hexafluoropropylene oxide dimer acid. Chemours uses the substance in the manufacture of fluoropolymers, which can resist heat, water, salt and chemicals and are used in demanding industrial environments.

“It’s great that the source has been found and even better that it appears to have been stopped,” said Mark Barker with the Blue Ridge Environmental Defense League. “These are ‘forever poisons’ with health impacts.”

“We have a right to know what’s in our drinking water,” Barker wrote in an email. “The state and the companies must do better. Companies must know who they are dealing with and what chemicals are involved. They can’t be allowed to get away with this.”

A company upstream from the Spring Hollow reservoir, where a hazardous chemical was detected, is believed to be responsible.

A hazardous substance used in the manufacture of no-stick plastic was detected in the river near the Spring Hollow reservoir in Roanoke County. Salem draws its drinking water some 10 miles downstream and so far has not detected the chemical in its water supply.

A compound called GenX has also shown up in the Spring Hollow reservoir, a key supply of drinking water for the Roanoke Valley.

The ProChem building at 5100 Enterprise Drive in Elliston on Thursday.

The South Fork Roanoke River across the street from ProChem Inc.

The ProChem building at 5100 Enterprise Drive in Elliston.