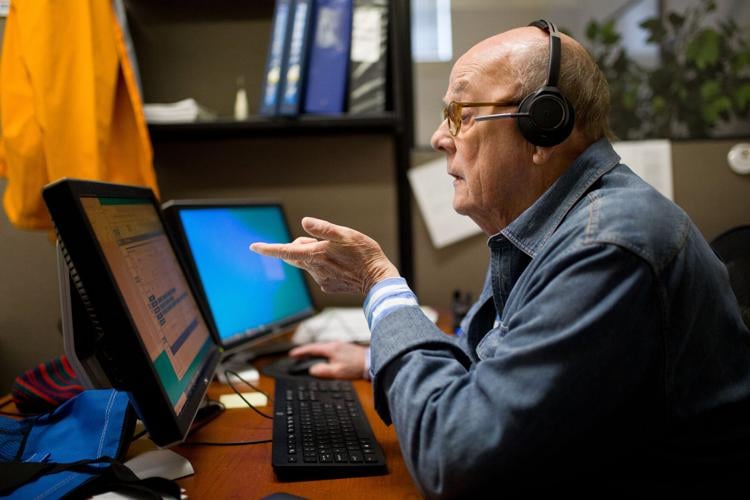 Tom Kennedy, community resource specialist with 211 Virginia, takes phone calls from people around Virginia seeking financial and other crisis assistance and connects them to helpful agencies from a call center at Council of Community Services, 502 Campbell Avenue in Roanoke. 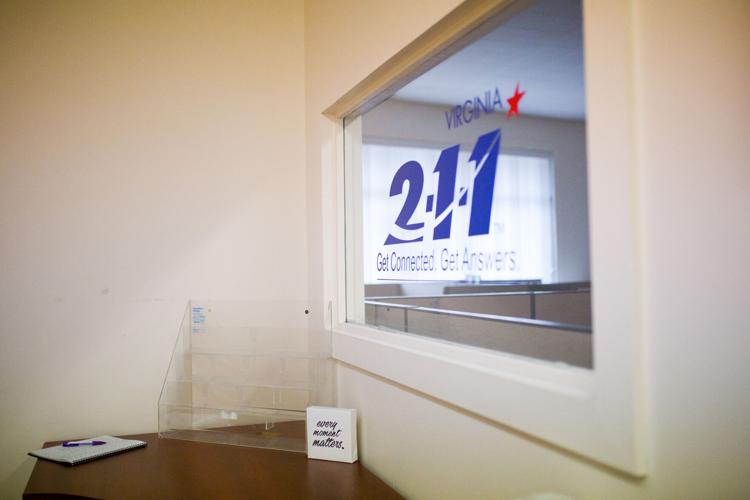 The lobby of the 211 Virginia center in Roanoke, which is experiencing much higher call volumes. 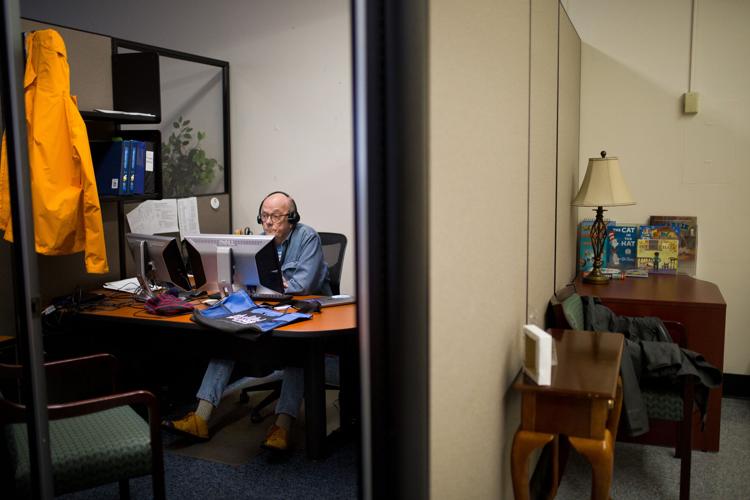 Tom Kennedy, community resource specialist with 211 Virginia, offers words of kindness as he tries to help those who call the service, which is based in Roanoke. 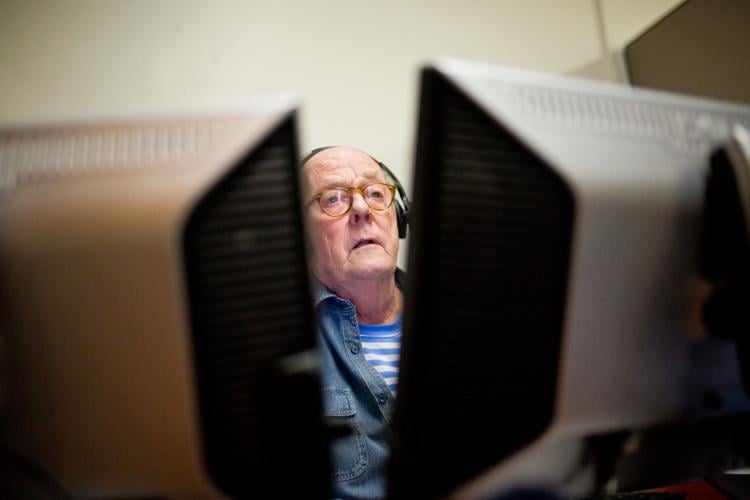 Tom Kennedy, community resource specialist with 211 Virginia, says of his interactions: “I try to give them a couple of minutes of peace and hope."

Tom Kennedy, one of the state’s 211 operators, told a caller seeking help with an unpaid rent that he liked her name.

“Did your mother give you that name?” he asked. “If you have a chance, you ask her because she gave you a beautiful name.”

Kennedy performed those small acts of verbal kindness earlier this week as he handled another demanding shift as a community resource specialist at the statewide information and referral service 211 Virginia. Dialing 211 is free 24 hours a day just like 911, only operators dispense practical information for managing the day-to-day of life. It has expert advice for finding a day care service, food bank, homeless shelter, job training center, tax preparation, legal help, health care and lots more.

People whose lives were upended by the pandemic have turned to 211 in large numbers. The phone line rings 700 to 900 times a day, up from 300 to 400 before the pandemic, according to a representative of the Council of Community Services in Roanoke, which operates 211 Virginia for the Virginia Department of Social Services.

The service still receives, as always, routine requests for community services information and familiar pleas for help managing poverty. But 211 operators have also spoken to thousands of people newly struck by pandemic-related economic pain, some in personal distress, who need reliable advice.

“I try to give them a couple of minutes of peace and hope,” said Kennedy, 75, a former broadcast radio professional with two years of 211 experience.

Facing income reductions or total income loss attributable to the pandemic’s fallout, callers want to stop eviction and ward off disconnection of their utilities or to find out what to do after they couldn’t. There’s the parent who doesn’t know how to make baby formula with the water cut off; the grief-stricken caller grappling with funeral arrangements for a COVID-19 victim; the lonely elderly who seldom go out.

“We’re seeing people that have never called us before,” said Margaret Telsch-Williams, director of the 211 Virginia call center.

The size of the contact center staff has stayed at about 20 people since usage spiked with the onset of the pandemic two years ago, which leaves operators feeling outnumbered. On Feb. 21 the service was contacted 864 times.

“We have the same number of staff working twice as hard as they’re handling twice as many calls as they used to,” Telsch-Williams said.

Weekdays between 9 a.m. and 6 p.m. the average wait is about 20 minutes, but can drag out to 45 minutes. In the early years of the service, which is 16 years old, 211 Virginia frequently answered calls in half a minute. That happens in the middle of the night, but seldom in the day, in these times.

Administrators hope to address understaffing by requesting volunteers, while they work for more state funding this summer. Funding for 211 fell from nearly $1.6 million in fiscal year 2020-21 to more than $1.4 million this fiscal year. A proposal before the Virginia General Assembly would boost funding July 1 to more than $2.1 million, said Anne-Marie Green, president of the Council of Community Services.

Telsch-Williams said pay starts at $15 an hour, “not enough for what they’re doing and how much stress they’re under.”

The average new employee probably needs six months of training, but the director said there’s only time for about six weeks. Then they put on a headset and go to work. Newly hired workers usually know in about a week if the job’s for them.

The job requires keyboarding in data and pulling phone numbers, websites and program descriptions from a database with 20,000 resources available through 8,000 agencies and entities.

But 211 operators also draw on a range of personal skills, which may include de-escalation for a caller in crisis.

“You can’t do this for the paycheck, you have to do it because you really want to help us,” Telsch-Williams said. “This is life, this is problems, this is family situations.”

Emotional depletion is an occupational hazard. Exhausted staff, who may handle 50 calls in a single shift, have taken time off to recharge. But other times staff have worked while experiencing COVID-19.

The agency has four openings for community resource specialists. Working from home is an option.

At one time, staff had ample time to call clients back and find out if the offered advice helped. When inbound call volume is high, there isn’t time. But follow-ups still happen and callers report success. Staff joyfully receive such news — they helped somebody move forward in life.

Kennedy said he started shortly before the pandemic began, learned on the fly, felt terrified he would give incorrect information and felt overwhelmed at times during the initial period, he said.

With two years under his belt, he appeared deft during a recent shift. One caller wished to communicate in an Asian language. Kennedy arranged for an interpreter to join the call in 90 seconds. He processed the request for assistance, which was about an unpaid utility bill, spending a total of 17 minutes on the case.

Kennedy said it’s critical for him to remember that people who dial 211 need something and are hurting without it. His opening lines, such as “we’re going to try to get you some help,” set a reassuring tone that the staff tries to strike with every customer. “We encourage them to be a human being. You’re not here to be a robot, an old-school phone operator, and every one of our staff is amazing like that,” Telsch-Williams said.

The 211 Virginia service is looking for volunteers to handle select types of calls during shifts of three or four hours. To apply, go online at:

The 211 Virginia service is looking for volunteers to handle select types of calls during shifts of three or four hours. To apply, go online at:

Children among injured as Pearisburg daycare vans crash on U.S. 460 in Blacksburg

Also hurt were occupants of a sedan that was involved in the wreck.

As Virginian politicians declared their distaste or support for the Supreme Court ruling on Friday, about 200 protestors took to the streets in front of the Poff Federal Building in Roanoke.

James T. 'Tim' Callis' single-engine plane has just taken on fuel when it began circling back toward Ohio County Airport in a rural area of western Kentucky. An eyewitness was quoted as saying the plane then nosedived and crashed.

A decade after the derecho: A word and a wind we will never forget

An unusual weather event rocked the Roanoke region and far beyond 10 years ago this week.

Asked about past charges, Roanoke candidate Volosin says "no" despite '18 case

Floyd County board says no to NRV Rail Authority

The board of supervisors voted last week not to join the authority after much discussion and answers from county Attorney Stephen Durbin.

Tom Kennedy, community resource specialist with 211 Virginia, takes phone calls from people around Virginia seeking financial and other crisis assistance and connects them to helpful agencies from a call center at Council of Community Services, 502 Campbell Avenue in Roanoke.

The lobby of the 211 Virginia center in Roanoke, which is experiencing much higher call volumes.

Tom Kennedy, community resource specialist with 211 Virginia, offers words of kindness as he tries to help those who call the service, which is based in Roanoke.

Tom Kennedy, community resource specialist with 211 Virginia, says of his interactions: “I try to give them a couple of minutes of peace and hope."