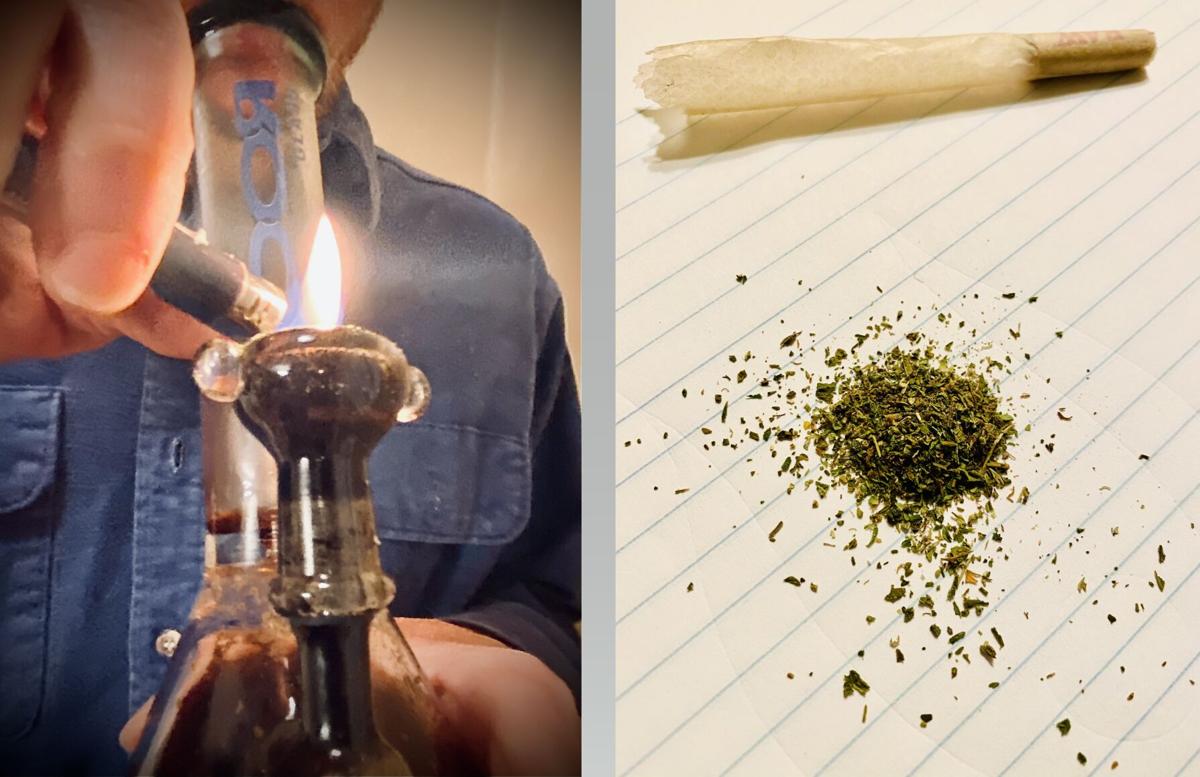 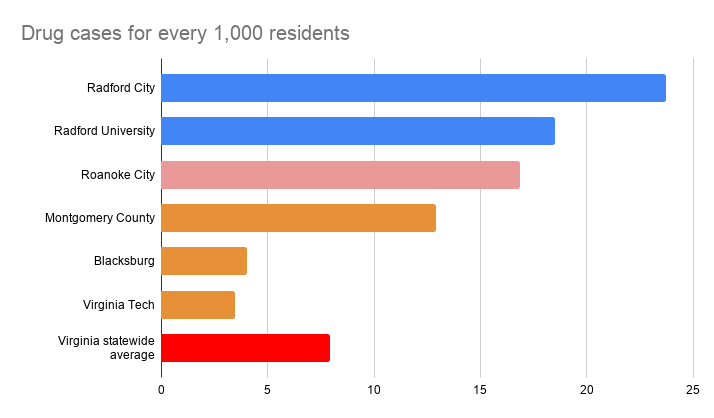 Sources and methodology: Data are derived from Virginia State Police’s Crime in Virginia annual reports and reflect an average of drug offenses reported by each agency from 2014 to 2019. 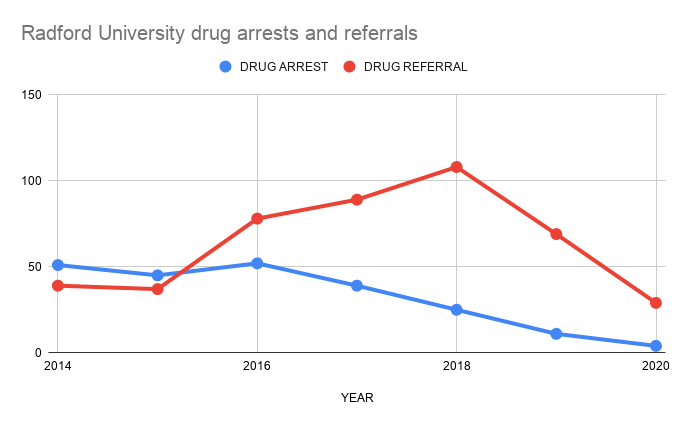 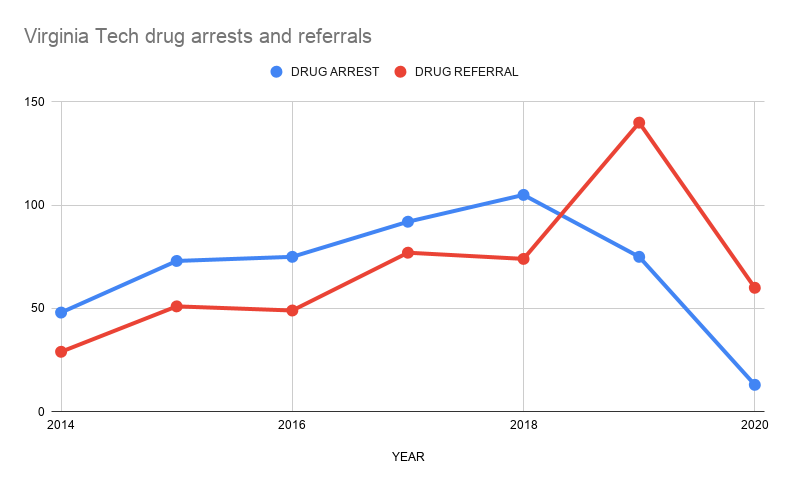 Marijuana has been growing on Virginia.

This summer, the state decriminalized the drug, meaning simple possession prompts a $25 civil fine rather than a misdemeanor that could carry a $500 fee, a suspended driver’s license and even jail time. Last month, Gov. Ralph Northam pledged that the General Assembly convening in January will seek to legalize weed, which practically could take effect as early as the summer.

Last year, for the first time since at least 2014, more Virginia Tech students were referred to the university’s conduct office for drugs than were criminally charged, according to a Roanoke Times analysis of data from Clery Act reports, which log crimes on campuses.

“I would say there was probably less emphasis on officers to place those kinds of charges, knowing the place the state was headed,” Virginia Tech Police Chief Mac Babb said about recent marijuana cases, which makes up the bulk of drug offenses. “There wasn’t an emphasis to go out and do drug enforcement, I can tell you that.”

Preliminary data for 2020 show a significant drop-off in both arrests and student conduct referrals at Tech and Radford University, with the pandemic shuttering campuses in the spring likely playing a factor.

But even if the state legalizes pot, students may want to think twice before toking up on campus.

Schools must still ban any use of cannabis — even medical marijuana — on college grounds, in keeping with federal laws like the Drug-Free Schools and Communities Act of 1989. That dynamic means students who may not be doing anything the state finds illegal could still be punished by a state agency.

“That was the real fear with a lot of these students, what the school was going to do with them, versus whether the legal system would handle it or not,” Brad McConnell, a Blacksburg-based defense attorney, said about drug cases in recent years. “I used to tell these parents down here that would call me, ‘Hey, you need to be calling the administration.’ It’s really overly punitive. You’ve got a kid caught with three or four grams of marijuana getting suspended from school when it’s being taken under advisement by the court.”

Nowadays, students appear less likely to be suspended for such behavior.

In response, Tech spokesman Mark Owczarski did not directly say whether anything had changed in recent years at the university. He said “student use and possession of cannabis has been and remains a student conduct violation,” and that “there are many different potential conduct outcomes.”

Punishment can still come at a price.

In the fall, a Tech freshman from North Carolina and his friends were caught with marijuana while at the Duck Pond one Tuesday evening.

“We were being stupid and kind of ignorant to the fact of where we were,” said the student, who agreed to speak on the condition his name not be made public because of legal ramifications.

“We heard rustling in the bushes then four officers stepped out with flashlights,” he said.

The student said both officers and university conduct staff were understanding. He was put on academic probation, had to write a 1,000-word essay on the incident, and take a two-hour Zoom class on drug and alcohol safety, for which he had to pay $130.

But the experience hasn’t prevented the student from smoking marijuana in the future, he said.

“I think that all it really is going to do is push me off campus, and that’s more to — not just to avoid the amount of police — but to avoid the trouble I can get in with the school,” he said. “It’s a different story. It’s a $25 citation through the police department, instead of getting the $130 drug class and a lot of trouble with the university.”

Another student who spoke with The Roanoke Times said he was also put on academic probation after a campus police officer caught him smoking pot in Stadium Woods this fall.

The freshman from Maryland said he was ordered to talk with a drug counselor a few times a week and write an essay about his emotions.

“I thought it was going to be worse, honestly,” he said of the sanctions. But while they won’t keep him from smoking, the penalties have influenced where he’ll light up.

“Oh yeah, it hasn’t stopped me,” he said. “But at Virginia Tech it has determined— I’m not trying to get a second conduct referral and face those consequences.”

Owczarski said in an email this month that “it would be premature for the university to comment on or discuss the impact of yet undefined legislation” on the university’s disciplinary policies.

But if the experience of states that have already legalized cannabis is any guide, not much will change.

“There were some really small clarifications that we made to our code and our housing policies,” Mike Katz, director of the Student Resolution Center at Colorado State University, said. “We still enforce all drug- and alcohol-related federal laws on university property.”

He noted that the land-grant university in Fort Collins hasn’t seen meaningful swings in its drug arrest and referral data since Colorado legalized recreational marijuana through a statewide ballot in 2012.

Katz encouraged college administrators in Virginia to follow the science of cannabis and to work with healthcare and mental health professionals when responding to marijuana cases, noting that “a student who is using marijuana typically is going to be of less concern to me than a student who is seriously abusing alcohol or any number of other drugs.”

“We’re long past the days of Reefer Madness,” he said.

Virginia’s own path to decriminalization began in 2010 when Republican Harvey Morgan from Gloucester County proposed such a bill in the House of Delegates. A Washington Post story at the time noted Morgan’s bills “have been viewed largely with amusement by his Republican colleagues. Some have taken to holding pinched fingers to their lips, to mime smoking a joint, as they pass him in the hallway.”

In 2017, the state enacted laws allowing use of medical marijuana, but final regulations took effect in the summer of 2019. Momentum toward legalization of adult use picked up that fall, when Democrats took control of the General Assembly.

In addition to both growing public acceptance and tax benefits, lawmakers have framed legalization as an issue of racial justice. Black Virginians have been arrested and convicted over marijuana offenses at much higher rates than white Virginians, despite using the drug at similar rates, according to a November study from the state’s Joint Legislative Audit and Review Commission.

Even before decriminalization took effect this summer, local prosecutors had shifted away from harsh punishments.

Jenn Michelle Pedini, executive director of Virginia NORML — the state chapter of the National Organization for the Reform of Marijuana Laws — said that if the General Assembly passes a legalization bill, the law would ideally make adult use of cannabis legal as early as July 1.

“What the state shouldn’t do is say, ‘OK, we passed a bill and it’s going to be legal, but it can’t be legal until we can figure out how to make money on it,’” Pedini said. “That would be terrible public policy.”

It could take two years for the state to fully implement a recreational marijuana marketplace.

“What you can’t do is snap your fingers and have a regulatory model take effect,” Pedini said.

Pedini noted that under a legalization bill, those aged 18 to 21 — which make up a significant majority of college students — would still be subject to a $25 civil penalty.

But for the Virginia Tech freshman from North Carolina, marijuana legalization strikes him as in perfect harmony with the ethos of the university.

“It’s a very hippy mountain type of atmosphere, and I feel like weed kind of ties in with that,” the student said. “I feel like it [legalization] will bring more of an atmosphere like that, or let it show a little more, which I think will be interesting.”

Carilion Clinic is offering monoclonal antibody infusions that if given within 10 days of COVID-19 illness can help to prevent the disease from progressing in people most at risk of becoming seriously ill. It works best when given in the first days of illness.

Sources and methodology: Data are derived from Virginia State Police’s Crime in Virginia annual reports and reflect an average of drug offenses reported by each agency from 2014 to 2019.