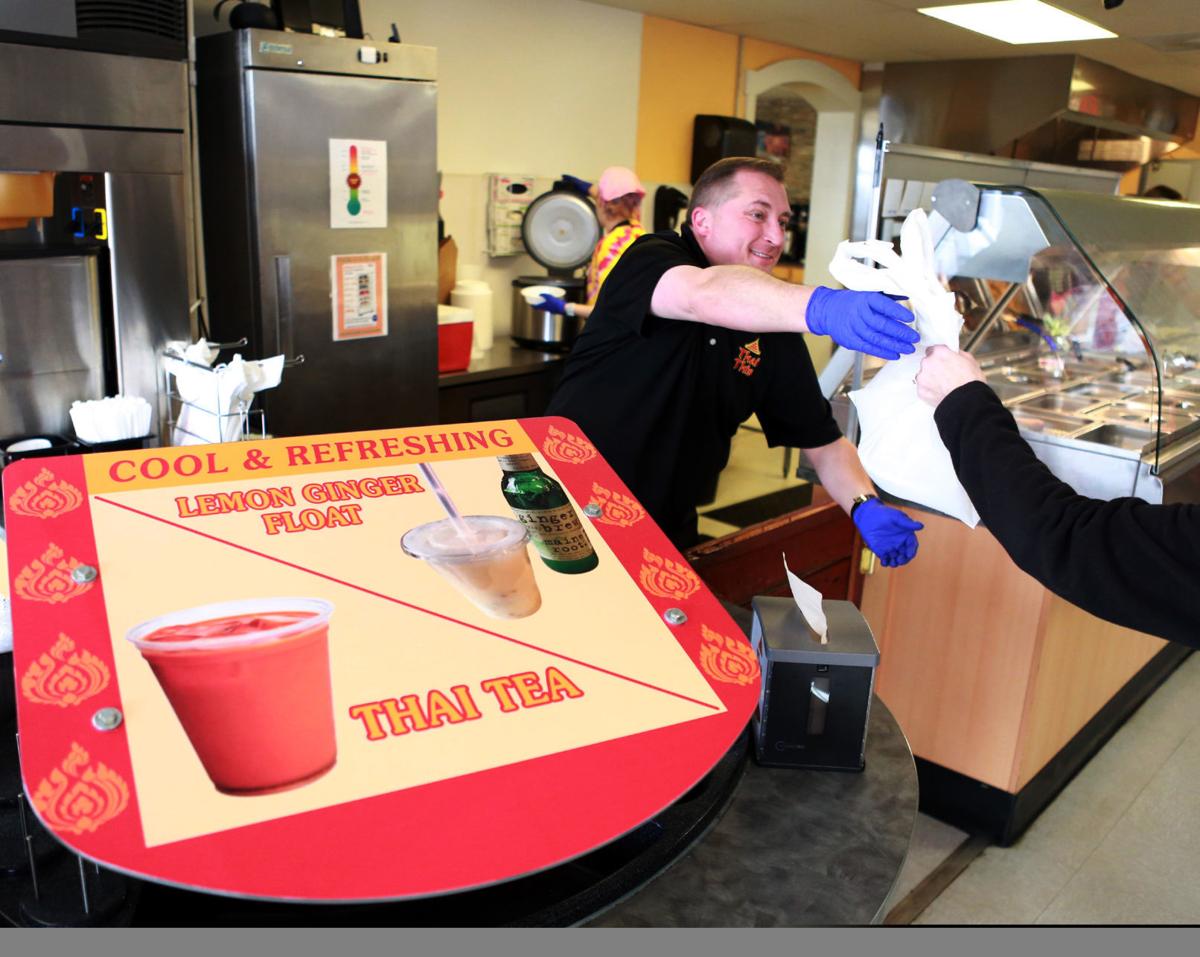 Owner-operator Brian Lawson hands over a to-go order. After beginning as the Thai This food truck four years ago, the business has launched Thai This Express, a storefront location on Tyler Avenue in Radford. 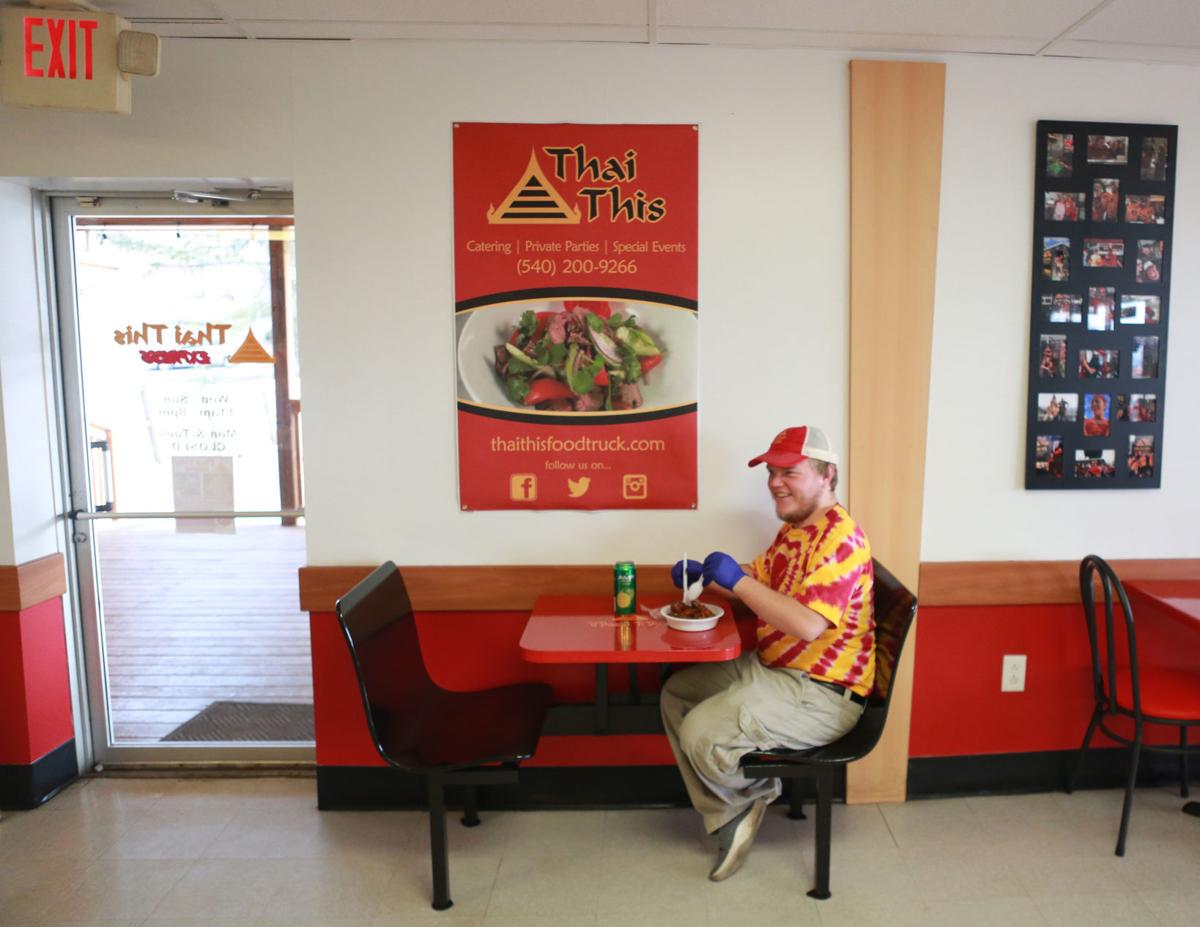 Thai This Express server Josh Dunford sits down with some basil chicken wings. 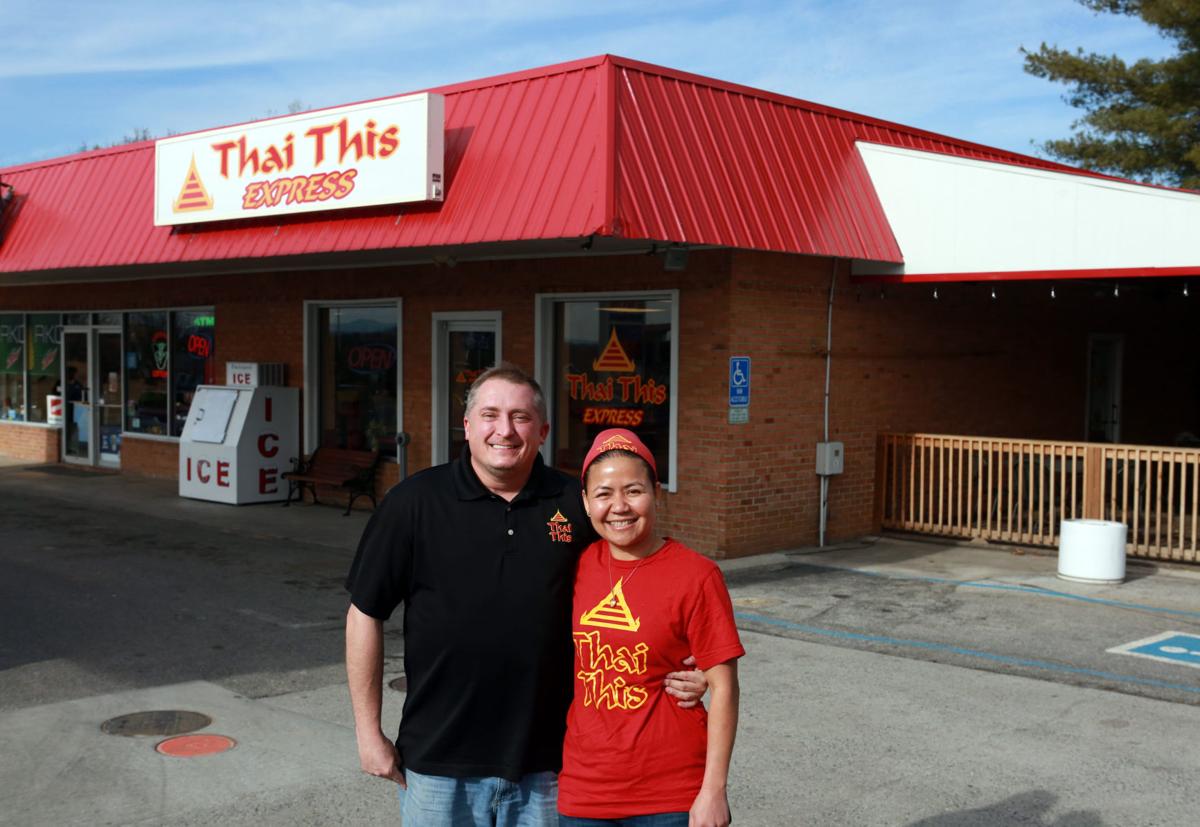 Brian and Jang Lawson in front of the Thai This Express storefront location on Tyler Avenue in Radford. 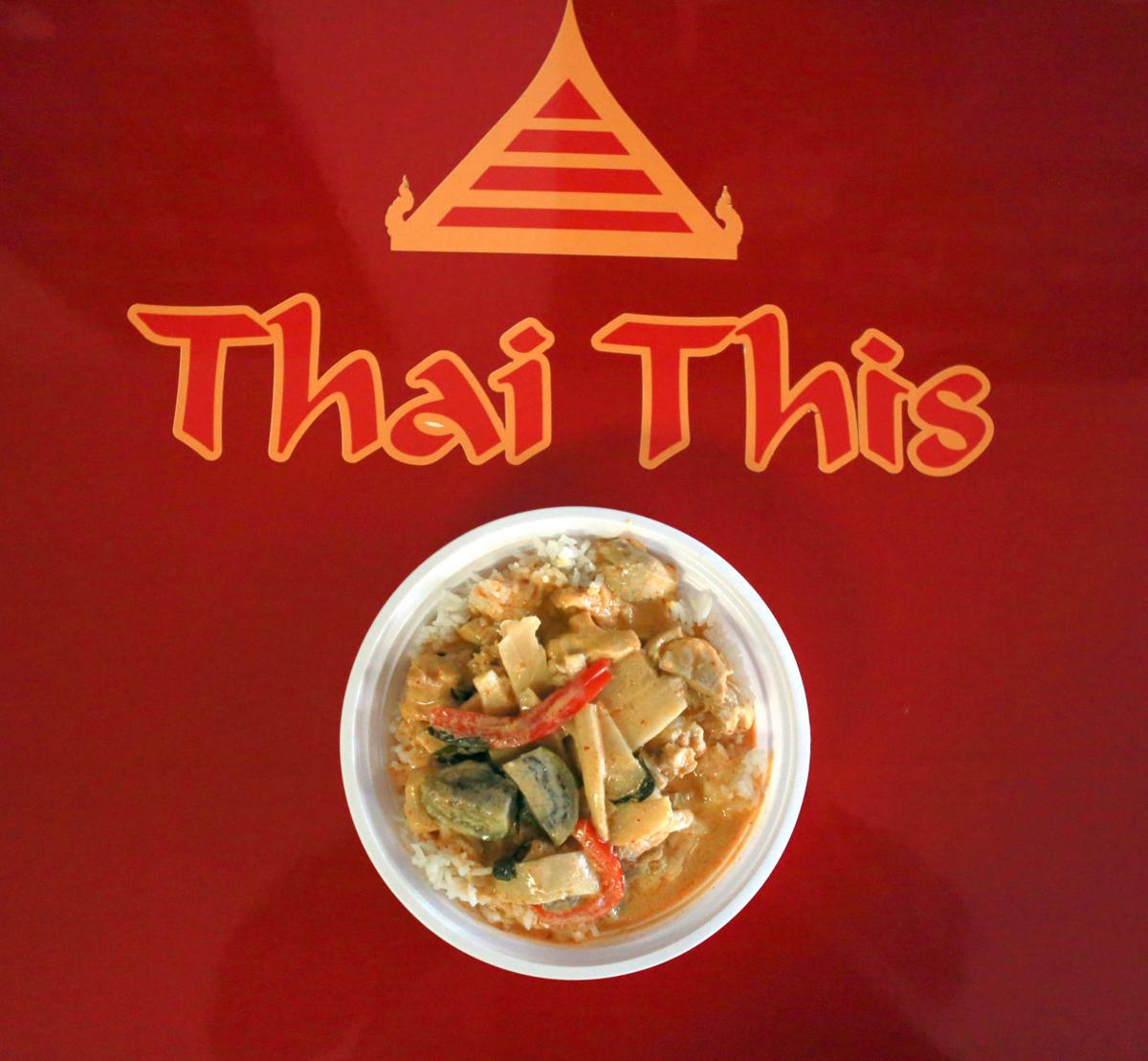 RADFORD — The Thai This food truck continues to attract long lines wherever it parks across Southwest Virginia, but the owners say you can only sell so much curry on four wheels.

The space is cramped. Inventory is limited to however much you can carry. You can’t add additional workers to deal with the lunchtime rush. You have to shut down when temperatures drop too low.

But, as the business moves into its first permanent restaurant location, owners Brian and Jang Lawson said they hope to see things really take off.

The Thai This food truck is closed for the winter right now, but will continue to make appearances around the Roanoke and New River valleys in the spring.

But now the Lawsons also own Thai This Express on Tyler Avenue in Radford.

The experience is similar to eating off the truck, except now there’s a dining room for customers. The menu hasn’t changed, though it is growing now that there’s more room to experiment in the kitchen. The food is cooked ahead of time, so it’s ready for quick service. Meals still cost around $9.

The store first opened in December 2017, and it’s still getting settled. About 70 percent of the customers so far first visited the food truck, but Brian Lawson is focusing on the 30 percent that are new diners he was able to reach because of the store.

He said the food truck was breaking even after four years of building a reputation for itself, but it didn’t bring in a lot of extra profits to grow.

The store, meanwhile, is already doing about as much business as the truck.

If the concept works, the Lawsons plan to open three additional Thai This Express locations around the New River Valley.

“We just kind of started from nothing. We wanted to do a restaurant but we couldn’t afford to do a restaurant — that’s why we did the truck,” Brian Lawson said. “Now we’ve graduated into a little space. Hopefully we’ll graduate into another one, and then a bigger one.”

The business is taking an unusual route, beginning with a food truck and transitioning to a traditional storefront — instead of the other way around.

But the Lawsons said their story couldn’t have come together any other way.

Jang Lawson, known as Mama Jang in the kitchen, met Brian Lawson in an online chatroom in 2007 while she was living in Thailand. She moved to the U.S. in 2009 and the couple got married.

Jang Lawson wanted a flavor of home, so she began searching for traditional Thai ingredients online and cooking for large groups of friends at home. She realized the food was something new for the area, and people were becoming fans.

Brian Lawson had years of restaurant experience, managing a line of Outback Steakhouses and a Coldstone Creamery around Alabama and North Carolina. So the couple decided to go into business together.

Mama Jang would set the menu, cook the food and be in charge of the kitchen. Brian Lawson would handle marketing and a lot of the business side of things.

The financials didn’t add up for the couple to go straight into launching a full restaurant, so they started smaller.

“It’s such a small space,” Jang Lawson said. “If you put too many people in it, it’s not going to work.”

The couple was enjoying the extra elbow room during a visit earlier this year, as Brian Lawson chatted with customers in the dining room and Mama Jang donned an apron in the back.

After spending most of his days in a truck for the past four years, Brian Lawson said the step counter he wears on his wrist has never recorded so much activity.

“We already feel like we have a pretty decent thing here in a month,” he said. “We’re really going to build this thing up.”

The Thai This opening is one of several other Radford restaurant happenings in recent months:

n The Dented Pot: The restaurant advertised locally sourced “Appalachian and low country cuisine” when it celebrated its grand opening inside Best Western Radford Inn around September 2017. It offered gourmet burgers, sandwiches and southern staples like chicken and waffles. But about four months after opening, the restaurant posted on Facebook that it would close the Radford store. “This decision wasn’t made lightly,” the restaurant posted on Jan. 15. “We are in the process of looking for another location.” The owners did not respond to questions about what’s next for The Dented Pot.

n Golden Bowl/Taco Inn: Chinese restaurant Golden Bowl has moved into the space that housed local staple Taco Inn for around 30 years. The casual Mexican restaurant first went public with its struggles when it contemplated closing in 2013. The news sparked more business, keeping the restaurant afloat for a few more years. When it did close, Golden Bowl jumped at the opportunity. Golden Bowl owner John Lin said a previous lease ran out for the restaurant, which has served carryout and dine-in Asian food for six years. So the business relocated to the former Taco Inn site about two miles away.

Owner-operator Brian Lawson hands over a to-go order. After beginning as the Thai This food truck four years ago, the business has launched Thai This Express, a storefront location on Tyler Avenue in Radford.

Thai This Express server Josh Dunford sits down with some basil chicken wings.

Brian and Jang Lawson in front of the Thai This Express storefront location on Tyler Avenue in Radford.