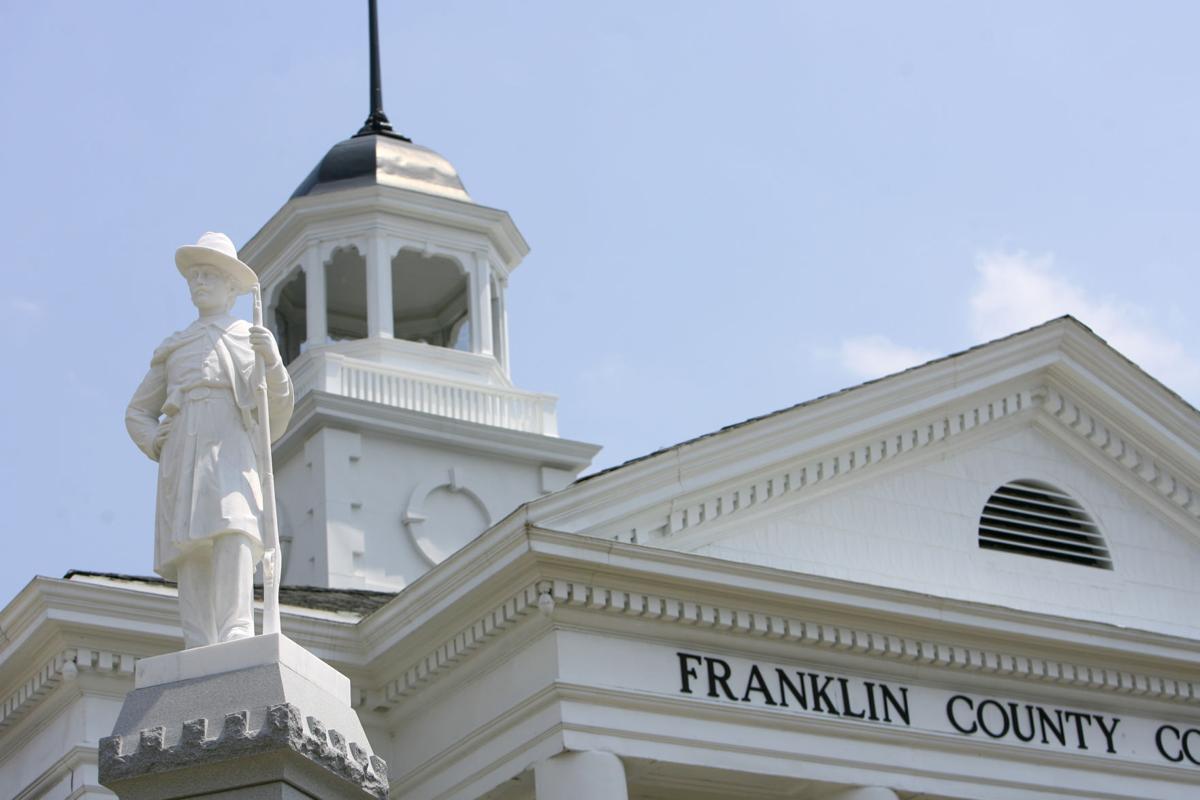 The Confederate statue at the Franklin County Courthouse in Rocky Mount. 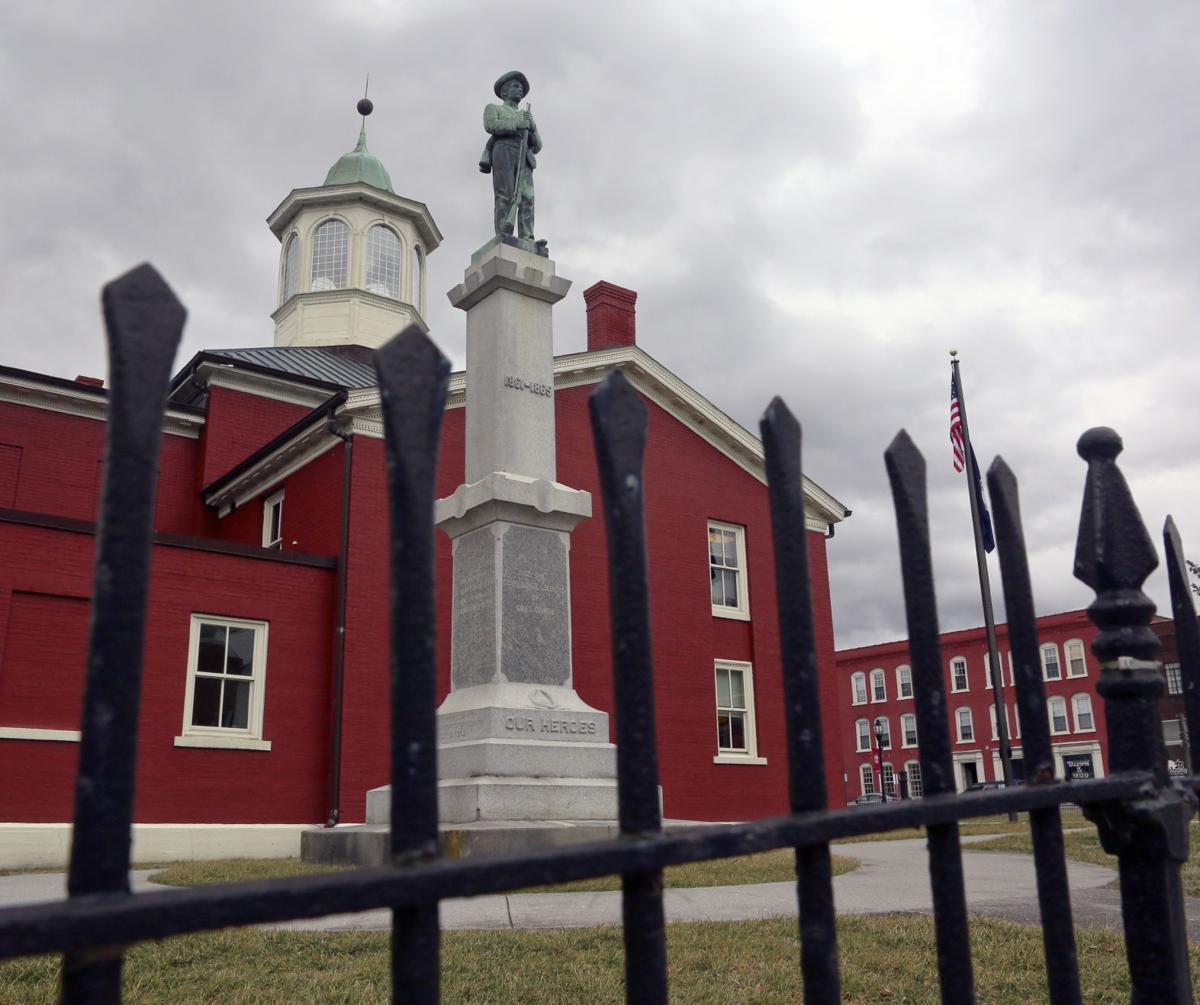 Towns and cities across Virginia are dotted with monuments to the Confederacy and its soldiers and leaders, including this monument at the Giles County Courthouse in Pearisburg. 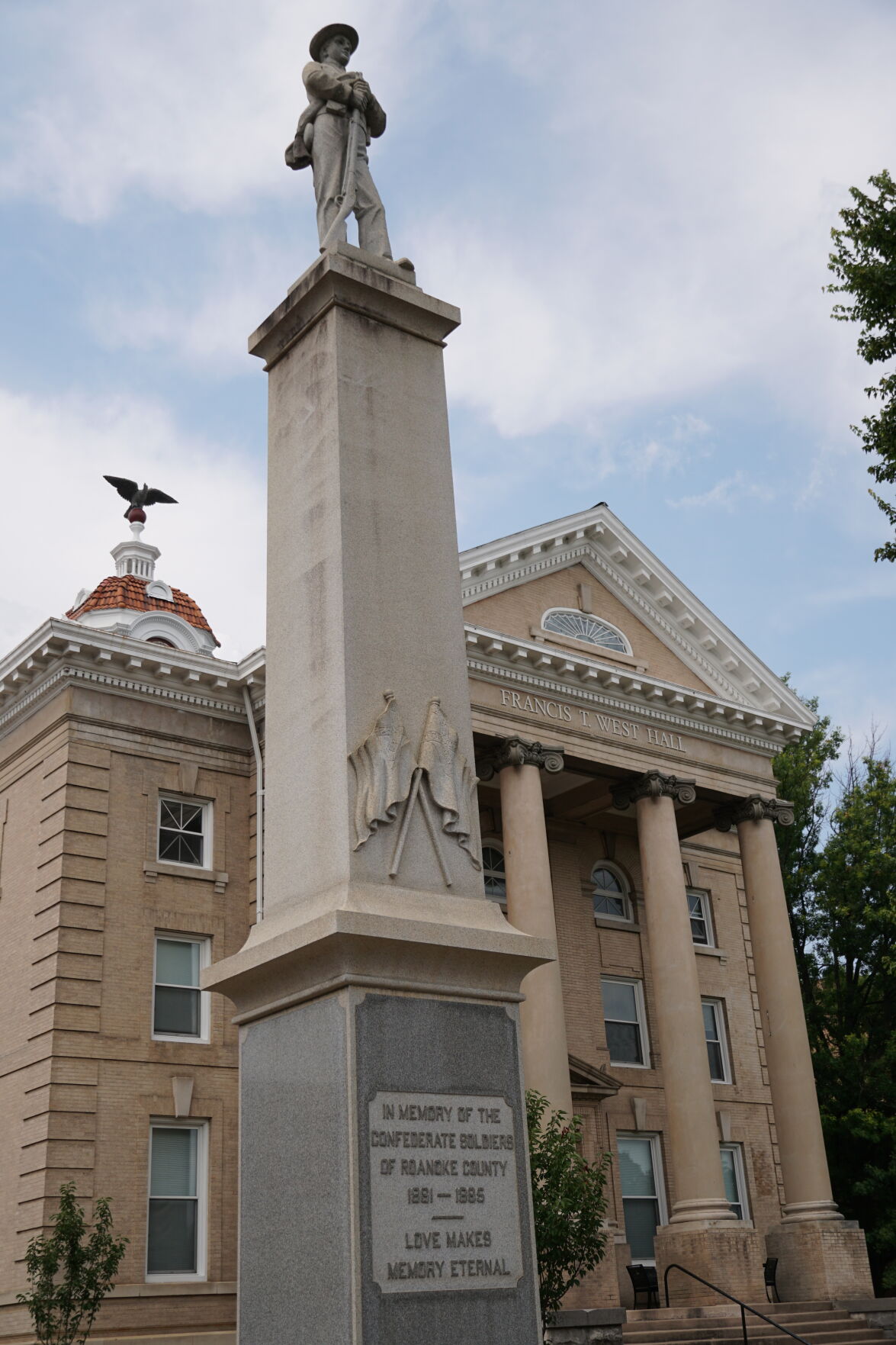 A Confederate monument sits off Main Street in Salem. The building behind it is the former county courthouse, now part of the Roanoke College campus. 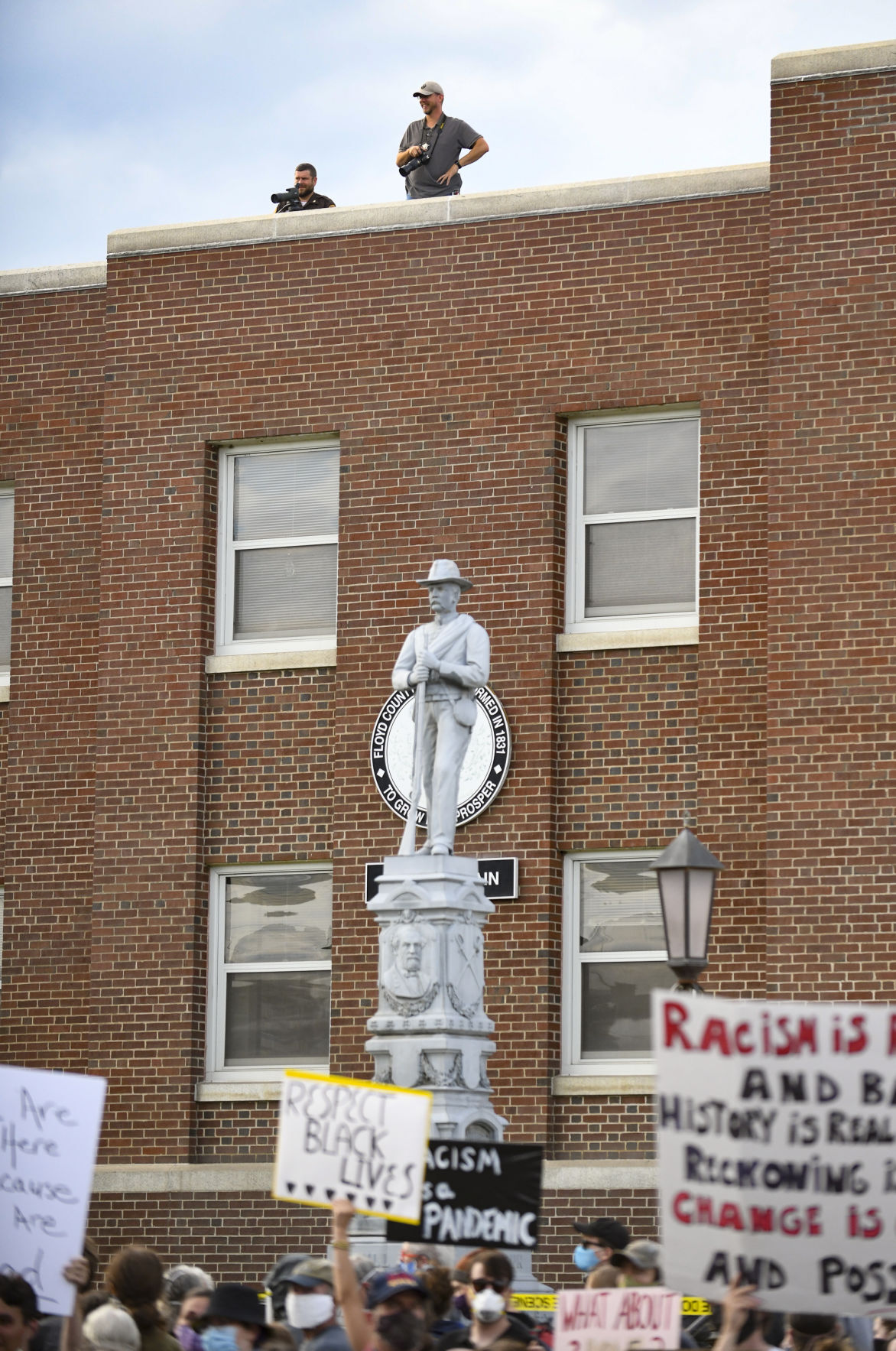 Members of Floyd County’s Sheriff’s Office watch as protesters offered songs, prayers and support at a “Floyd4Floyd” rally and vigil in 2020 at the county courthouse — where a Confederate monument continues to prompt debate. 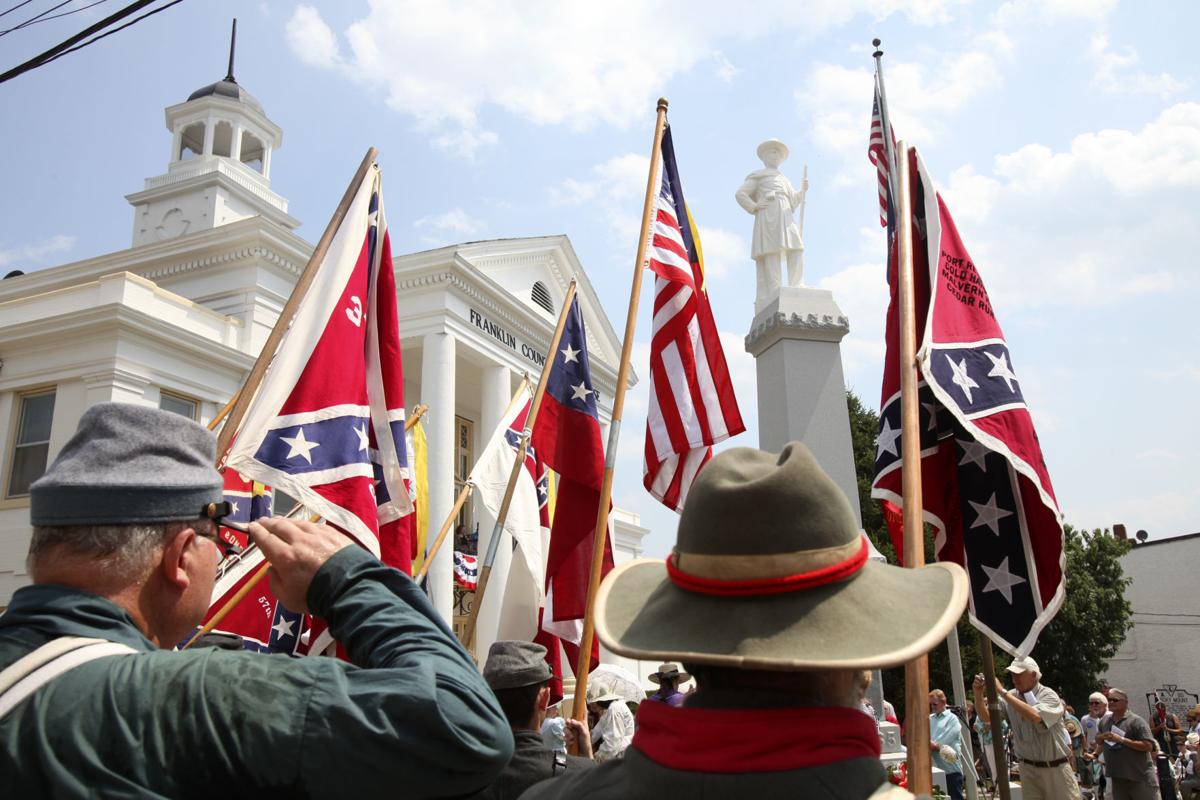 Members of the Fincastle Rifles Camp #1326, Sons of Confederate Veterans, salute as the new Confederate soldier monument is dedicated in 2010 at the Franklin County Courthouse in Rocky Mount.

Confederate monuments might relocate due to new construction, or be removed upon the order of elected leaders, but during the last two Virginia elections, constituents of nine counties voted strongly against moving Civil War memorials.

During elections this November in eastern Virginia, Middlesex County saw 77% out of 5,500 votes cast “no” to a Civil War monument referendum, while in nearby Mathews County, 80% out of 4,700 voters said “nay” to a similar monument movement question.

In Southside Virginia, 67% out of 5,300 Nottoway County voters were likewise opposed to relocating their Confederate War Memorial, unveiled 1893, from directly in front of the courthouse.

State law changed to allow the removal of war memorials in 2020, the same year that the six counties of Halifax, Warren, Tazewell, Lunenburg, Franklin and Charles City all voted 55% or more against moving or removing monuments from their present places, usually outside courthouses.

Despite high ratios of dissenting ballots, scholars suggest recent referendums in those nine counties have little bearing on the future of monument movements statewide.

University of Virginia Law Professor Rich Schragger has authored legal reviews and newspaper columns about the legality of moving war memorials. Opinions on whether to move Confederate statues tend to split along partisan lines, he said during a phone call.

“It’s interesting that these things got on the ballot in the first place,” Schragger said, adding that city councils or county supervisors can elect on their own to move monuments. “They can do a referendum, but they don’t need to.”

In Washington County, Civil War statues are moving out of necessity. The county announced earlier in November it is entertaining letters of intent from anybody interested in acquiring either of two Confederate monuments that must be moved from courthouse grounds for renovations.

And Virginia’s governor did not resort to referendum when he ordered removal of the 60-foot-tall Robert E. Lee statue in Richmond, which came down in September, despite legal opposition.

Confederate general statues in Charlottesville that served as the setting of a fatal white supremacist rally in 2017 were removed this July, after a yearslong legal battle over the city council’s decision for removal.

Recent votes against monument movements may indicate the preferences of Virginians in rural and typically Republican-voting precincts, but not necessarily everywhere else, he said.

“These referenda struck me as kind of political statements, in part because … those counties likely did not have a big push for removal in the first place,” Schragger said. “In jurisdictions where there is a kind of clear majority favoring removal, I think the city council would act anyway, maybe without the need for a referendum.”

Additionally, Confederate statues might be owned by a county, but exist in the middle of a city, complicating the idea of a referendum, he said. That’s the case for a Roanoke County Confederate monument situated near the regional jail and courthouse, located in the middle of downtown Salem.

“So it’s interesting to wonder, who should decide?” Schragger said. “Should it be the people who live with the monument every day because it’s right down the street from them? Or should it be the entire county making this decision — all the citizens, even if they don’t live very close to it?”

Opinions could potentially split between city and county residents, he said.

“The citizens of Salem may want to get rid of it, but the county residents — and Roanoke County has more population — might want to keep it,” Schragger said. “Is that fair, simply because it’s a county statue?”

He said it’s usually a good idea to ask impacted voters what they want, “but figuring out who the relevant political community is, is sometimes trickier than it looks.”

A diversity of opinion

Overall, time will decide the future of Confederate statues, Schragger said. The nine votes in recent elections represent only a few of at least 126 Confederate monuments tallied statewide in 2019 by the Southern Poverty Law Center.

“I wouldn’t draw huge conclusions,” Schragger said. “Other cities have moved to remove their monuments already. I think what we will see is some localities keeping their monuments, and many having them removed. That represents the diversity of opinion in the state.”

Such diversity of opinion interests Ashley Reichelmann, assistant professor of sociology at Virginia Tech. She’s interviewed numerous people from local communities over the years, who taught her their truth about Confederate statues, she said.

Polls conducted in July 2020 by Quinnipiac University found that 82% of respondents who are Black were in support of removing Confederate statues from public spaces, while 75% of respondents favored removal in the youngest demographic, ages 18-34.

“Younger folks are more likely to understand the implications of having a statue, even if they don’t necessarily believe in the interpretation of it having racist implications,” Reichelmann said. “They do recognize the reality that people are interpreting it as such.”

Further, she pointed to recent exit polls from the 2021 election that showed 82% of Republican voters were in favor of leaving Confederate monuments where they are, while 87% of polled Democrats preferred to remove them. Overall, 51% of exit poll respondents favored leaving the statues.

But just looking at election results or exit polls would paint an incomplete picture. There is complicated context surrounding the simple yes-or-no responses.

“These referendums are not just about modern political views,” Reichelmann said. “Frequently, they’re about different elements that we’re taught as young people.”

The way people are taught history as children seems to significantly impact whether they currently support Confederate statues, she said, summarizing some of her research based on interviews with Virginians.

Lost Cause revisions of history wiggled into Virginia textbooks well into the 1900s, and that’s what kids were taught, she said.

“That was deeply rooted, and likely a narrative that they were taught as a child,” Reichelmann said. “Public education was taught in a very specific way, in order to garner support to retain statues, in some capacity.”

So it would be disingenuous to blame people for having one viewpoint or another, she said. Viewpoints are often learned, and reflect what people understand as truth.

“Sometimes what’s important to know is the perception of what’s happening, rather than what’s actually happening,” Reichelmann said. “What’s important for folks is not to look at the vote, but to talk with local people about how they came to that.”

She said it is important not to judge opposing views or look at the divisive component of the Confederate monument referendums, but to instead start discussions on how people arrived at their perspectives.

“In what I’ve seen so far, I believe that for the communities that still have statues, we’re only going to see them move through other action,” Reichelmann said. “Or with the threat of other action.”

In Loudoun County last year, a chapter of the daughters proactively requested their 1908 Confederate statue be returned from the county courthouse lawn, after a majority of elected leaders expressed verbal support for its removal, but before a formal vote was cast.

“The communities that still have Confederate statues on public land know why they’re there, in some capacity,” Reichelmann said. “There’s no way an individual or community can claim that they don’t recognize opposition at this point.”

Communities including Roanoke County are considering adding informational placards around their Confederate statues, to more completely explain how and why they got there. But a drafted version of state guidelines for contextualization remain in development, undergoing a bureaucratic approval process.

Understanding is key to finding consensus, as is willingness for people to come together, Reichelmann said.

“How they got there and why they got there are going to become important for us to understand,” Reichelmann said. “How do we move forward as a society when we have very divisive issues?”

The Confederate statue at the Franklin County Courthouse in Rocky Mount.

Towns and cities across Virginia are dotted with monuments to the Confederacy and its soldiers and leaders, including this monument at the Giles County Courthouse in Pearisburg.

A Confederate monument sits off Main Street in Salem. The building behind it is the former county courthouse, now part of the Roanoke College campus.

Members of Floyd County’s Sheriff’s Office watch as protesters offered songs, prayers and support at a “Floyd4Floyd” rally and vigil in 2020 at the county courthouse — where a Confederate monument continues to prompt debate.

Members of the Fincastle Rifles Camp #1326, Sons of Confederate Veterans, salute as the new Confederate soldier monument is dedicated in 2010 at the Franklin County Courthouse in Rocky Mount.