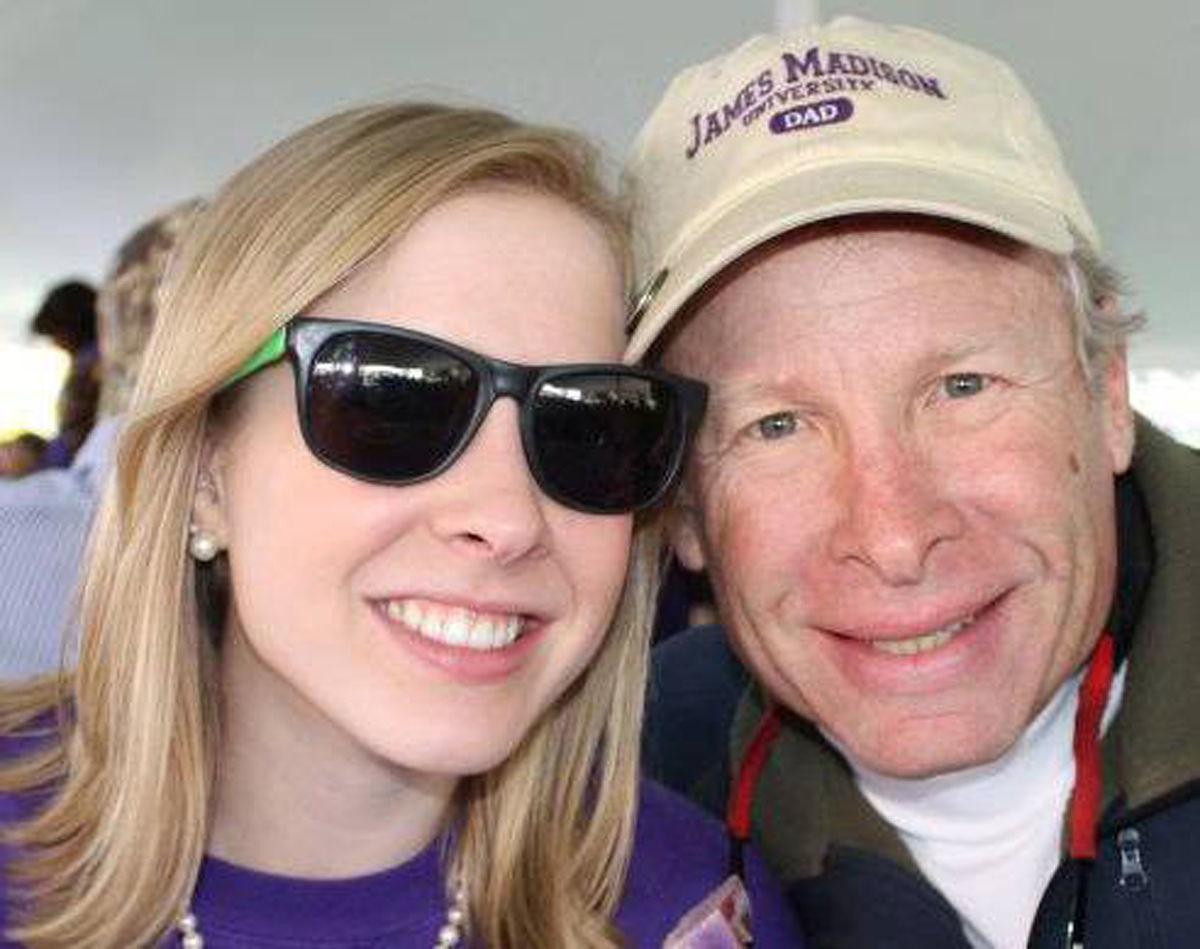 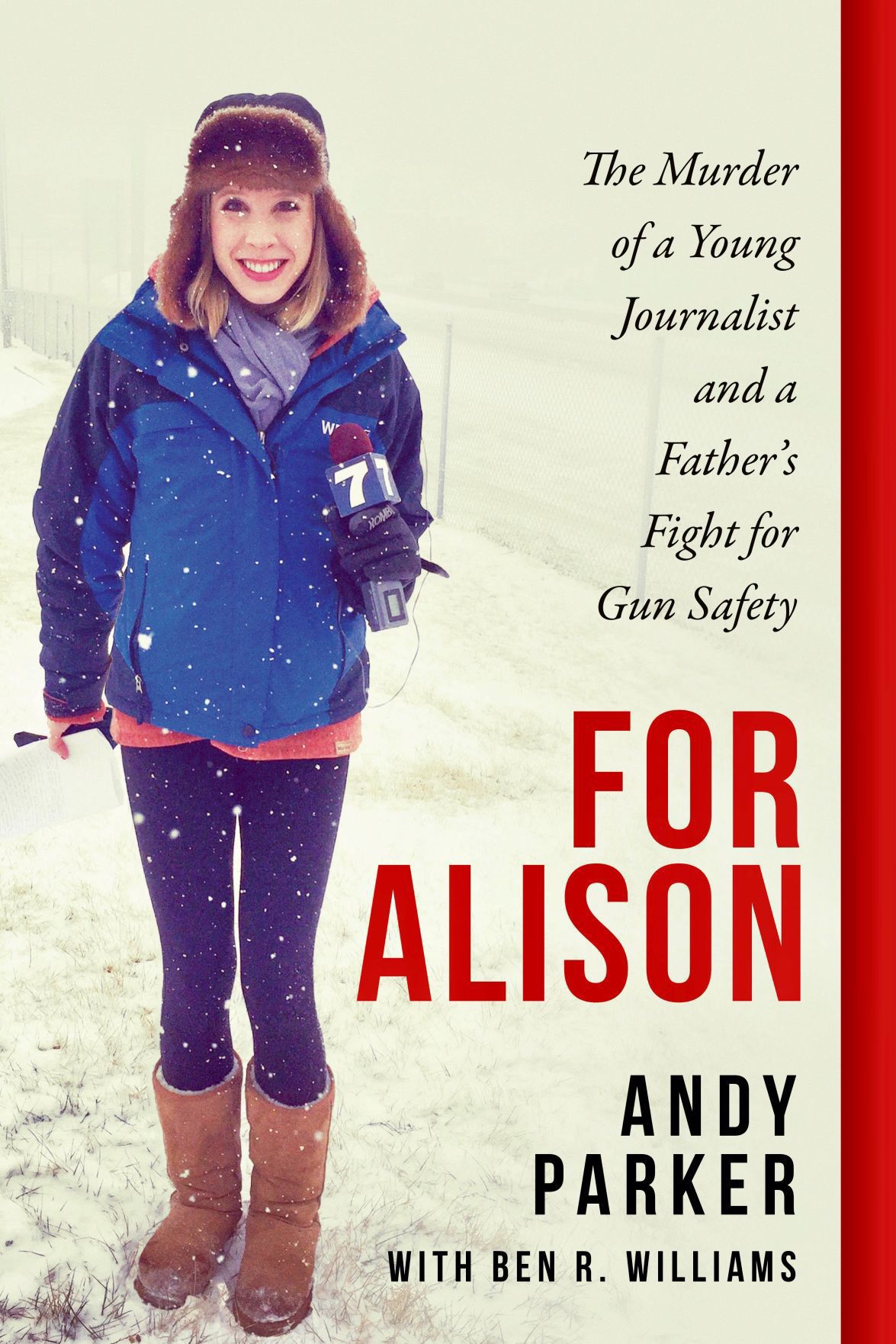 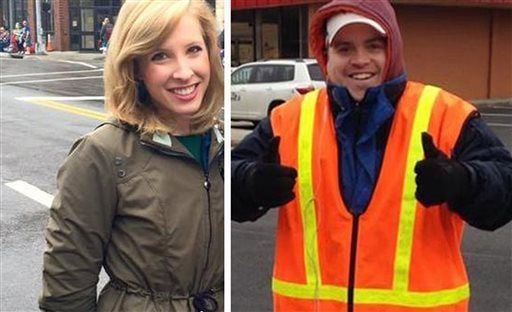 WDBJ (Channel 7) reporter Alison Parker (left) and cameraman Adam Ward were shot and killed live on air by a disgruntled former employee of the station in 2015.

Andy Parker has spent three and a half years trying to erase online footage of his daughter’s shooting death — all while never having seen the videos himself.

“I feel like I’ve been dodging a land mine because I haven’t seen the video, and I never want to,” Parker said.

The death of 24-year-old Alison Parker was documented in two ways. Cameraman Adam Ward, who was also fatally shot, broadcast the moment live on WDBJ-TV (Channel 7). And the gunman, a former colleague, used a camera attached to his chest to film the killing of Parker and Ward and the wounding of Vicki Gardner, a chamber of commerce official they were interviewing. He then posted it to social media.

The videos festered across platforms. Knowing the videos remain out there, along with the conspiracy theories they produce, is traumatizing to Andy Parker. He may eventually stumble upon one, and he hates the idea of people viewing them for intrigue or entertainment, or that they are monetized with advertising.

Since Alison Parker was killed at Smith Mountain Lake on Aug. 26, 2015, her father has been on an evolving mission to honor his daughter through action. He started out fighting for gun law reform. He recently released a book about his daughter.

Now Parker is putting pressure on major technology companies — especially YouTube’s parent company, Google — to take action against people posting videos of his daughter’s murder and conspiracy theorists who thrive on their platforms.

Parker said for years he has tried to work with Google to figure out a way to remove the videos in bulk instead of having to individually flag them.

“The onus should not be on me or any families who have gone through a tragedy to remove these videos,” Parker said.

Parker got inadequate responses and too many excuses, he said. He contacted Georgetown Law’s Civil Rights Clinic, which is helping Parker accomplish his goals.

“There needs to be a measure of human decency at Google that thus far they have not exhibited,” Parker said.

Andy Parker’s experience is unfortunately not unique. Victims and families of the Sandy Hook and Parkland shootings have been dogged by conspiracy theorists and harassers.

This month’s slaughter in two New Zealand mosques played out on the platforms of some of the biggest technology companies, which have roles in publicizing violence and hosting the hate-filled ideology breeding it.

For years, it has automatically flagged pornography and copyrighted music, yet YouTube has not been able quell the upload and spread of violent attacks.

When you search “Alison Parker” on YouTube’s website, there are numerous videos of Alison Parker’s murder, captured from Ward’s angle or the killer’s viewpoint.

There are conspiracy videos suggesting the shooting was a hoax. There’s a man who finds it “interesting” that a girl with the last name Parker died at the Sandy Hook shooting and another boy killed there liked tacos. The man then includes video of a WDBJ news broadcast of Parker saying she likes Mexican food.

There’s a video that scrolls through a bunch of photos from a Parker family vacation and ponders why Chris Hurst, a former WDBJ news anchor who is now a state delegate, is in none of the photos. The conclusion is he must have posed as Alison’s fake boyfriend.

“These trolls have always been out there since the beginning of time, but now they have a platform,” Andy Parker said.

For YouTube to remove similar videos, it asks people to flag them and cite the reason for why they should be taken down. This was impossible for Parker because of the trauma he would suffer in the process.

Parker reached out to Leonard Pozner, whose 6-year-old son Noah was among the 26 people shot to death at Sandy Hook Elementary in 2012. Pozner and others have studiously helped Parker remove videos.

One video showing her murder that could be viewed last week now displays a message saying it’s unavailable “due to copyright claim by the HONR Network.” Pozner created the Honr Network, which is devoted to stopping the “continued harassment and intentional torment” of victims of major tragedies.

Pozner’s most effective tool for removing conspiratorial content about his son has been filing copyright claims on images of Noah. Parker has developed a similar strategy.

He asked WDBJ’s owner, Gray Television, for the digital rights to the video that Ward shot of the shooting. That way videos using that footage could be cited for copyright infringement.

Online platforms are not held liable for copyright infringement claims against users of their platforms, as long as they remove or block access to content in response to the claims.

As for the video the gunman shot, Parker said it still should be YouTube’s responsibility to remove videos showing a killing because the service’s terms of use bars publication of videos showing the moment of someone’s death.

“We’re just doing this whack-a-mole thing, taking one down and another pops up, but instead we need to systematically do something about it,” Parker said.

That is where the Georgetown Law Civil Rights Clinic has come in. About three weeks ago, the team working on Parker’s issue sent a letter to Google demanding that it take down all videos showing Alison’s death. The letter also makes other demands, including prohibiting hoaxes or content that targets and harasses victims of public tragedies and their family members.

“I think in Andy’s case, the real hope is to have a conversation with Google,” said Andrew Mendrala, a supervising attorney at the Georgetown law clinic. “It just makes so much sense for them to give Andy what he’s asking for. The incentives are completely aligned here.”

Parker is waiting on a response from Google.

He hopes his actions will help others by stopping the spread of violent content and conspiracy theories that add another layer of trauma for grieving families.

Parker also fears such content emboldens extremism and gives killers the notoriety they seek when they know videos will be propelled around the world. He reasons that violent attacks can be reduced by eliminating such a source.

This month’s massacre in New Zealand became the third time that Facebook has been used to broadcast video of a murder. In 2015, a gunman posted Alison Parker and Ward’s death. In 2017, a gunman posted a video of him shooting a man in Cleveland and then talking about the killing.

Shortly after the New Zealand massacre, Facebook revealed statistics on how quickly users are able to upload videos, which the social media giant said illustrated its inability to intercede.

Mendrala said the public pushback to the inadequate responses from the companies illustrate why action is needed.

“This is an issue that is never going away; it’s only going to get worse,” he said. “It’s also completely in Google and Facebook and all these platforms’ interests to address this head-on and play offense and not defense. They’ve been very reactionary. It makes sense for them to spend the resources to get this right.”

He says he’s not just fighting for his daughter, but for everyone.

“There’s not an hour in the day that goes by that I don’t think about her,” Parker said. “But if I didn’t honor her through action, she’d be pissed. She would. Because I know she’d do the same for me, and so that’s why I keep going. That’s my job.”

Where: Glenvar Library at 3917 Daugherty Road in Salem

"For Alison" is available to purchase at book stores now.

Andy Parker took his battle with Google over its resistance to removing videos of his daughter’s shooting death to Washington, D.C., to ask Co…

It has been more than four years since WDBJ-TV journalist Alison Parker, doing a live television interview at Smith Mountain Lake, was killed …

It was a secret love, a private passion between otherwise very public people.

Gov. Terry McAuliffe met privately Friday with WDBJ (Channel 7) staff to offer his sympathy and support as the station continued to mourn Alis…

MARTINSVILLE — Andy Parker, the father of slain WDBJ (Channel 7) journalist Alison Parker, announced Thursday he was dropping out of the race …

After loss of Alison Parker, WDBJ anchor lives in honor of her and himself

In the nearly four months that WDBJ anchor Chris Hurst lost his girlfriend, Alison Parker, he's accomplished a variety of tasks to honor her.

Tragedy and transition: One year after the WDBJ shootings

WDBJ (Channel 7) reporter Alison Parker (left) and cameraman Adam Ward were shot and killed live on air by a disgruntled former employee of the station in 2015.