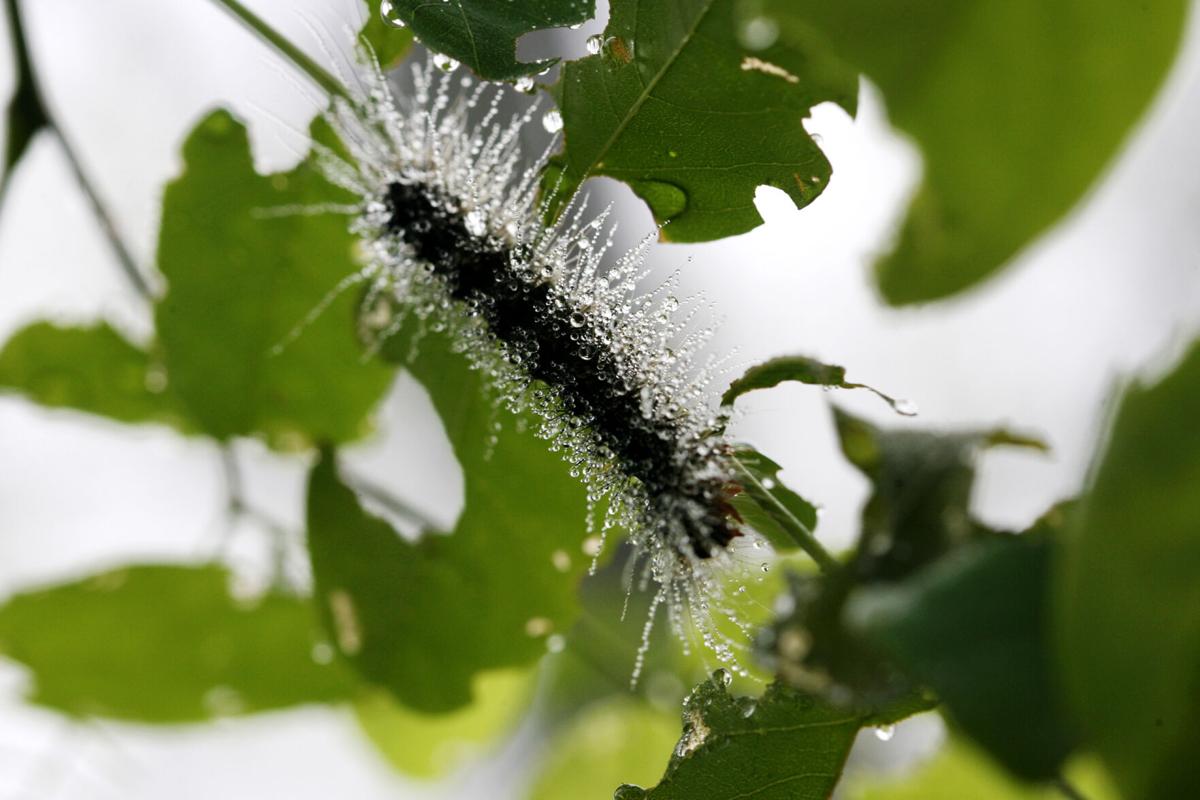 A single gypsy moth caterpillar will consume as much as 10 square feet of foliage in its short lifetime. 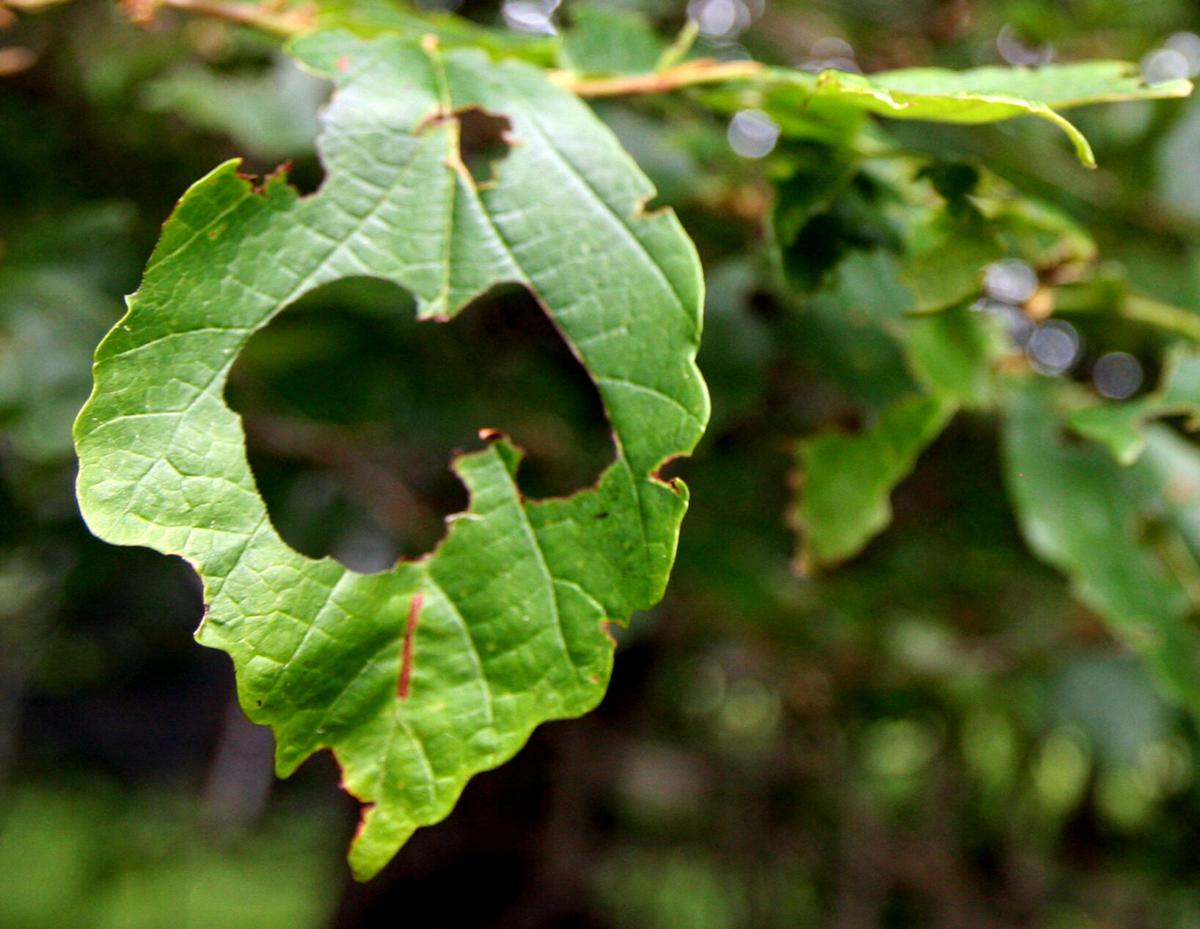 The hairy gypsy moth caterpillars, distinguishable by red and blue dots on their backs, climb high into trees and feed rapidly — with as much as 10 square feet of foliage being consumed by a single caterpillar in its short lifetime. 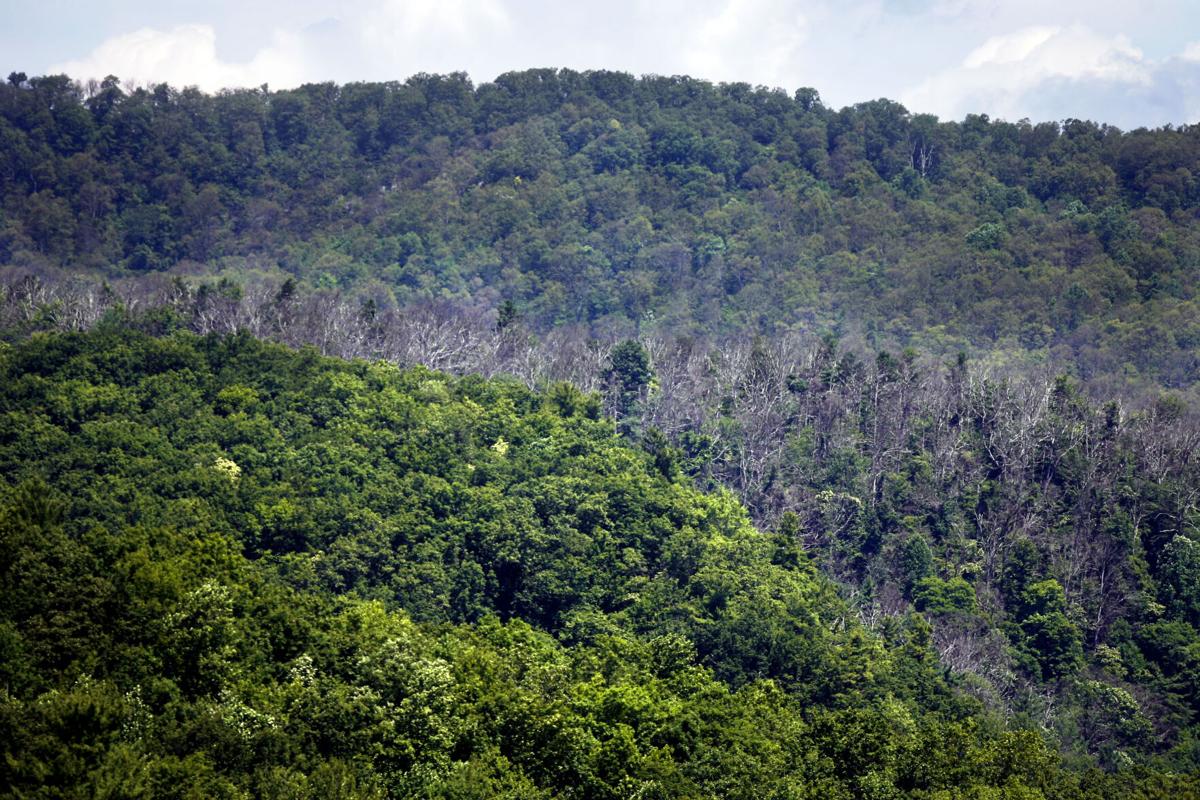 Defoliated trees, center, were caused by a gypsy moth caterpillar infestation on Brush Mountain in 2009. Oaks are most vulnerable to the gypsy moth, but it has been known to feed on more than 500 types of trees, shrubs and plants. 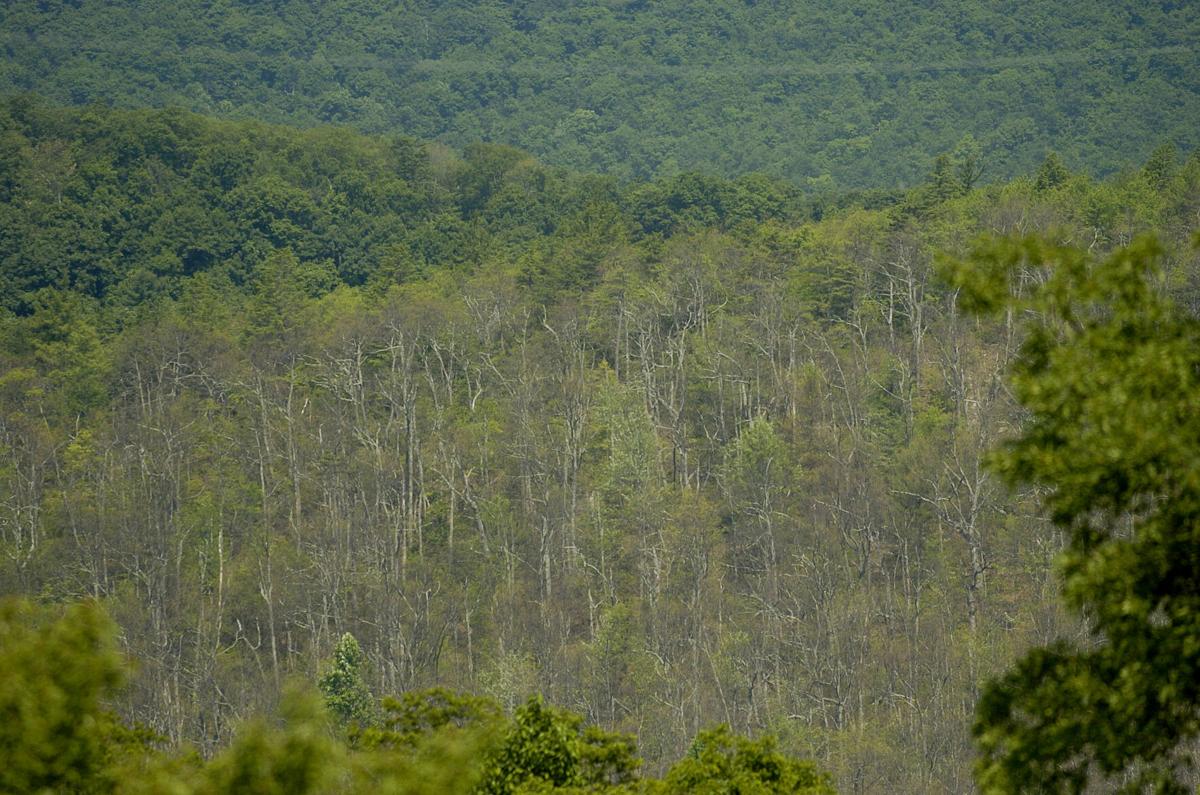 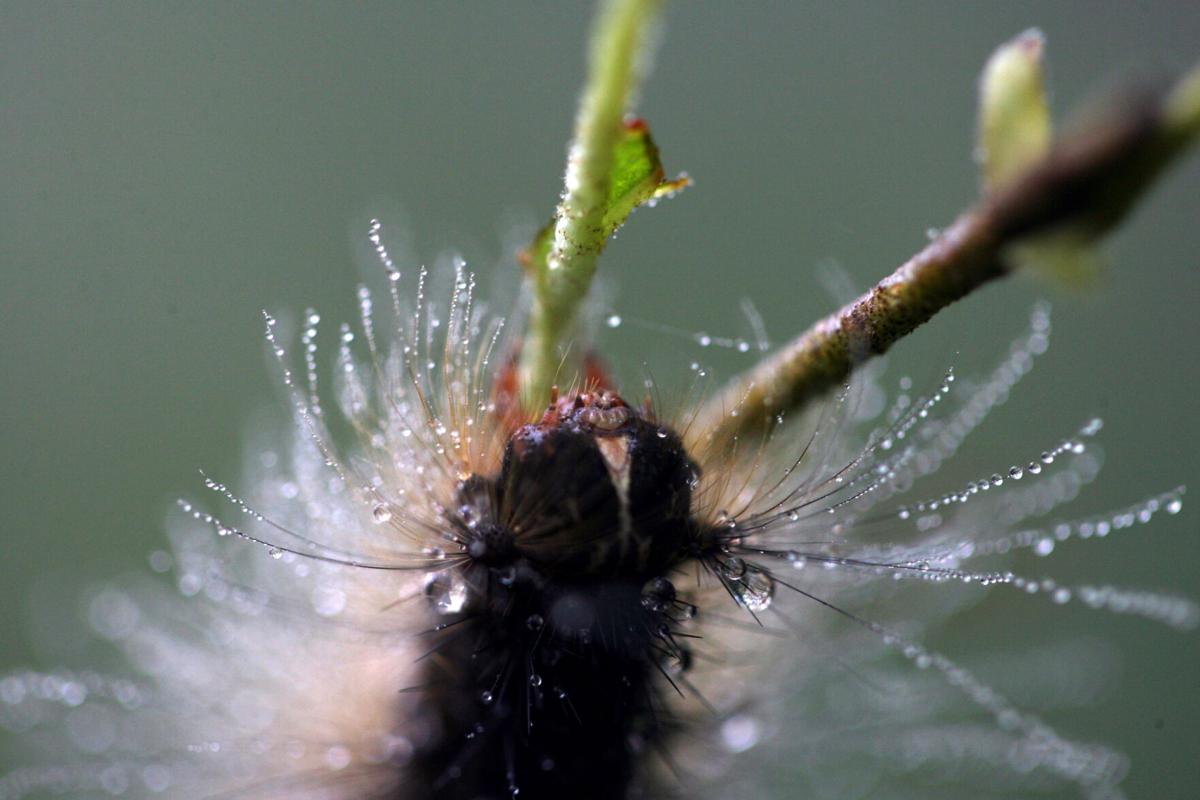 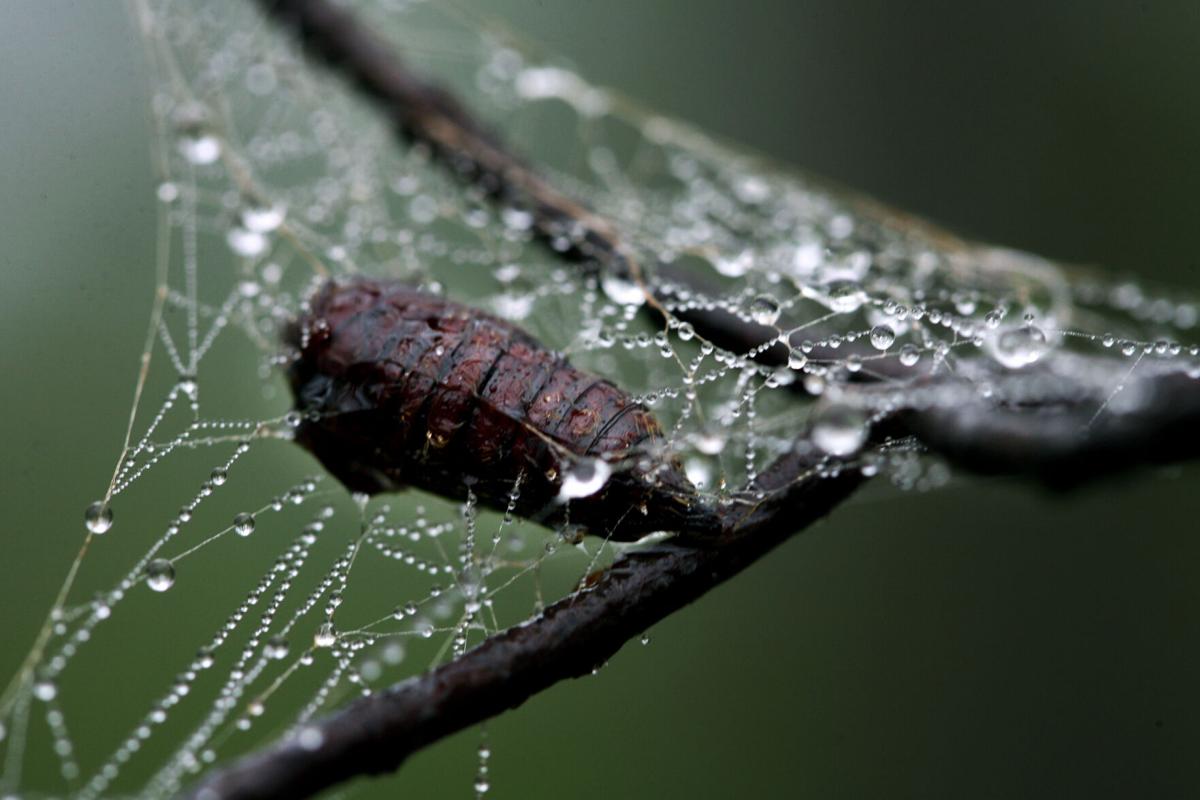 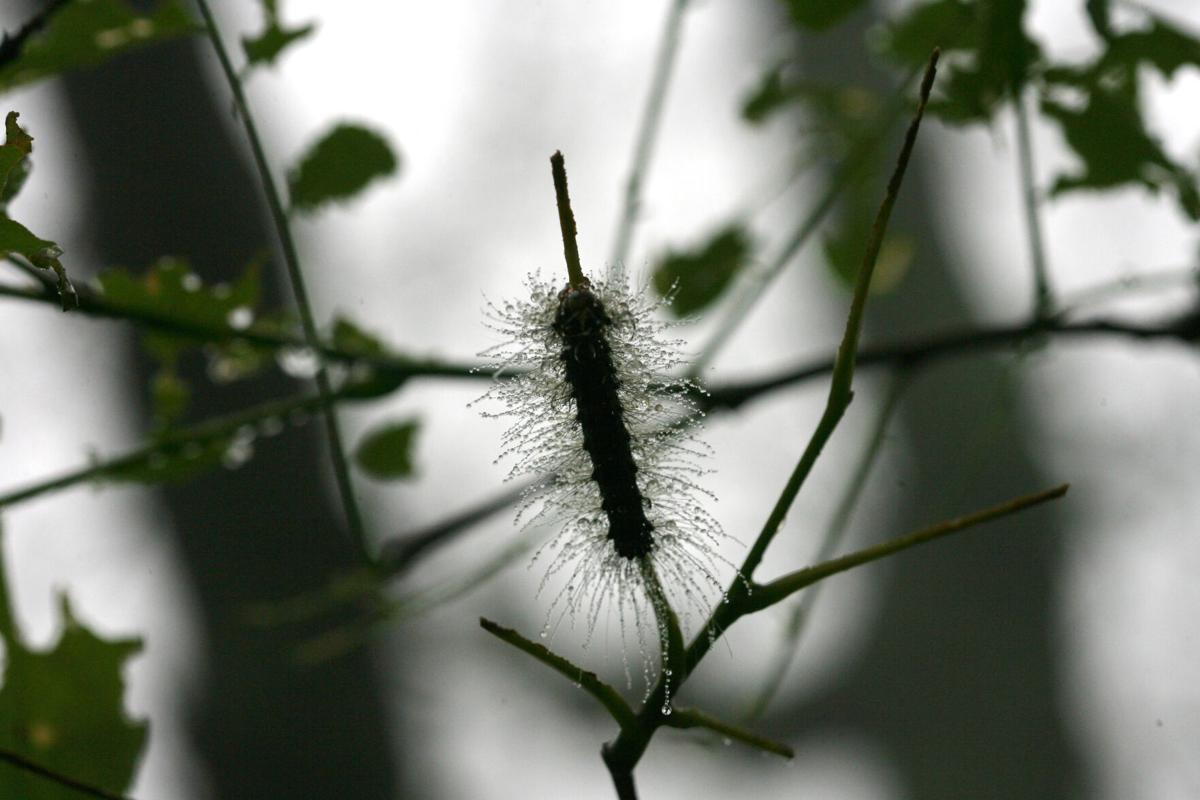 The following is an article about sex-crazed gypsy moths.

For those of you who are still with us, the U.S. Forest Service is taking public comments on a program — which it more discreetly describes as a “mating disruption treatment” — to eradicate an invasive species that feeds voraciously on foliage.

Gypsy moths also have a big appetite for sex. And unprotected moth sex leads to caterpillars, which have stripped oak trees and other hardwoods of their leaves in Southwest Virginia and beyond.

To protect the trees, the Forest Service is taking a family-planning approach to a problem that starts with the female gypsy moth’s inability to fly.

The female produces a powerful scent, or pheromone, to attract mates. As part of the program, a synthetic pheromone called SPLAT GM Organic will be dropped from airplanes on nearly 21,000 acres of forest in and near the Mount Rogers National Recreation Area in late June, just as the breeding season begins.

An intense combination of real and fake pheromones is too much for most moths. “The males simply fly around in a confused state unable to specifically locate females to mate with,” the Forest Service said in a statement.

Eventually, they die lonely. That leads to less larvae, which means fewer caterpillars. And, over time, the forests become more healthy.

The risk posed by gypsy moths is not new. A native of Europe, the pest first arrived in Massachusetts in 1869. The intent was to cross it with native silk moths, but the larvae escaped from cages in the backyard of an amateur entomologist.

Spreading slowly but steadily, the infestation has now reached 20 states as far north as Maine and west to the Great Lakes, according to the U.S. Department of Agriculture.

Gypsy moths live for only about two weeks, which explains why they are so bent on reproduction while they have the time. In fact, they don’t even eat. Eggs are laid on tree trunks, branches and rocks, where they survive the winter and hatch at about the time leaves begin to appear on trees.

The hairy caterpillars, distinguishable by red and blue dots on their backs, climb high into trees. In order to sustain themselves before turning into moths, breeding and then dying, they feed rapidly — with as much as 10 square feet of foliage being consumed by a single caterpillar in its short lifetime.

“This is the reason why they are such terrible pests,” said Ksenia Onufrieva, a research scientist at Virginia Tech’s Department of Entomology.

Over the past century, the spread of gypsy moths has happened primarily in two ways: Slowly, when the wind blows the larvae from the trees, advancing the insects by about 100 feet a year. And more rapidly, when the egg masses are accidentally transported by humans after finding their way into cars, campers, and loads of firewood.

In the late 1980s, they arrived in the Jefferson National Forest, according to Tom Coleman, an entomologist with the Forest Service who manages the moth eradication efforts.

Outbreaks occur in cycles of about eight to 12 years, Coleman said. An infestation from 2015 to 2018 defoliated about 120,000 acres in federal woodlands and on private land, mostly in Bland and Giles counties.

Statewide, about 4.4 million acres have been impacted since 1984, according to records kept by Virginia Cooperative Extension.

So how can the moths be muted?

The Forest Service began working with 12 states, and in 2000 the Slow the Spread Program was created.

Traps baited with a synthetic pheromone are used to identify colonies that have been established beyond the main population front. The formula is then dropped from an airplane during the mating season, causing a sexual — but ultimately unsuccessful — frenzy that is repeated each year.

The liquid formula is biodegradable and poses no threat to wildlife or humans, according to a fact sheet from the Ohio Department of Agriculture, which participates in the program.

Airplanes fly 100 to 200 feet above treetops, spreading a small dose of about 6 grams an acre on the forest.

“These pheromone treatments are very effective, they are shown to reduce mating success by over 95% compared to untreated areas,” Onufreiva, the Tech scientist who is involved in the Southwest Virginia efforts, wrote in an email.

That has reduced the rate of spread by about 60%.

When trees are stripped bare, they often grow a second set of leaves that are smaller and more lightly colored, making them stand out in the forest. Healthy trees can usually withstand one or two severe defoliations, according to Virginia Cooperative Extension. Stressed trees are likely to die the first time.

Oaks are most vulnerable to the gypsy moth, but it has been known to feed on more than 500 types of trees, shrubs and plants.

Although the aerial application of pheromones has been happening in the Jefferson National Forest since 2000, repeated doses are required as new populations continue to emerge.

In a recent classified ad, the Forest Service said the treatment is planned this summer for almost 21,000 acres in Smyth and Wythe counties.

The area includes about 18 miles of Forest Service trails. While the spraying is not expected to cause problems for humans, exposure to the caterpillars can trigger respiratory problems, skin irritation and allergic reactions for some people. But the biggest threat is to trees.

Without eradication measures, Onufrieva said, the gypsy moth will continue its spread across the country, at a rate of about 12 miles a year.

The U.S. Forest Service is asking for public comments on its gypsy moth eradication program.

Comments may be submitted electronically through late March to https://cara.ecosystem-management.org./Public/Commentinput?Project=59509

Dr. Harry McCoy recently left private practice at Blue Ridge Cancer Care, where he worked as an oncologist and hematologist for more than two decades.

CASEY: In defense of Reps. Ben Cline and Morgan Griffith

Since December, scores of letters to the editor have hammered the Sixth and Ninth District congressmen. But as questionable as their efforts to overturn the presidential election were, it could be far worse.

The Virginia legislature narrowly accepted an accelerated schedule to legalize possession of small amounts of marijuana, with Lt. Gov. Justin Fairfax breaking a tie in the Senate.

End of the line for Roanoke Valley's trash train

The way the Roanoke Valley transports its trash to the regional landfill will change with the closure of the nearly 30-year-old trash train in favor of heavy trucks.

Kevin Forrest Hite pleaded guilty to 11 charges tied to a sexual relationship he had with a girl who he said was 15.

Recognition from the International Dark-Sky Association is expected to encourage star-gazing at the state park.

Two state police cars collided Wednesday while pursuing a suspect in a drug investigation in Roanoke, according to the Virginia State Police.

The situation prompted a debate over the free speech versus proper university values.

A single gypsy moth caterpillar will consume as much as 10 square feet of foliage in its short lifetime.

The hairy gypsy moth caterpillars, distinguishable by red and blue dots on their backs, climb high into trees and feed rapidly — with as much as 10 square feet of foliage being consumed by a single caterpillar in its short lifetime.

Defoliated trees, center, were caused by a gypsy moth caterpillar infestation on Brush Mountain in 2009. Oaks are most vulnerable to the gypsy moth, but it has been known to feed on more than 500 types of trees, shrubs and plants.