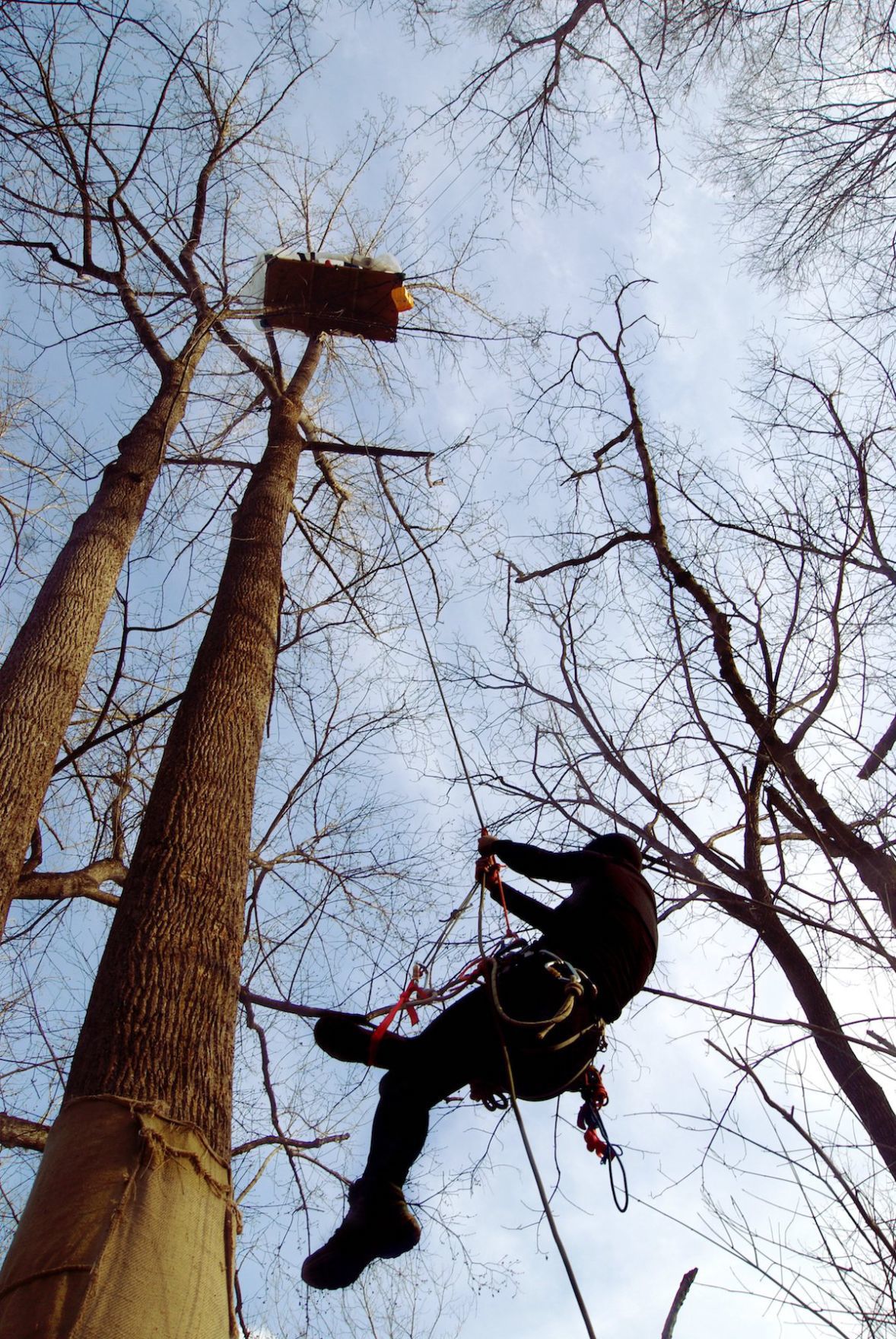 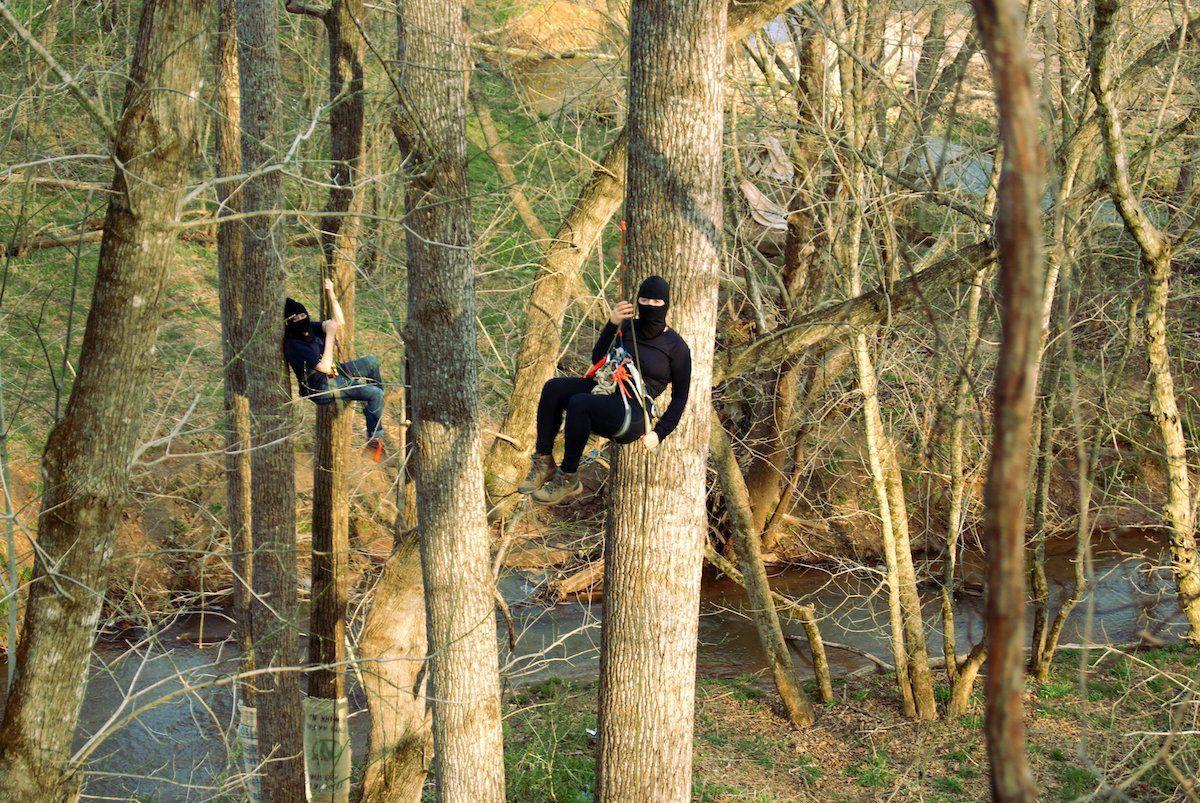 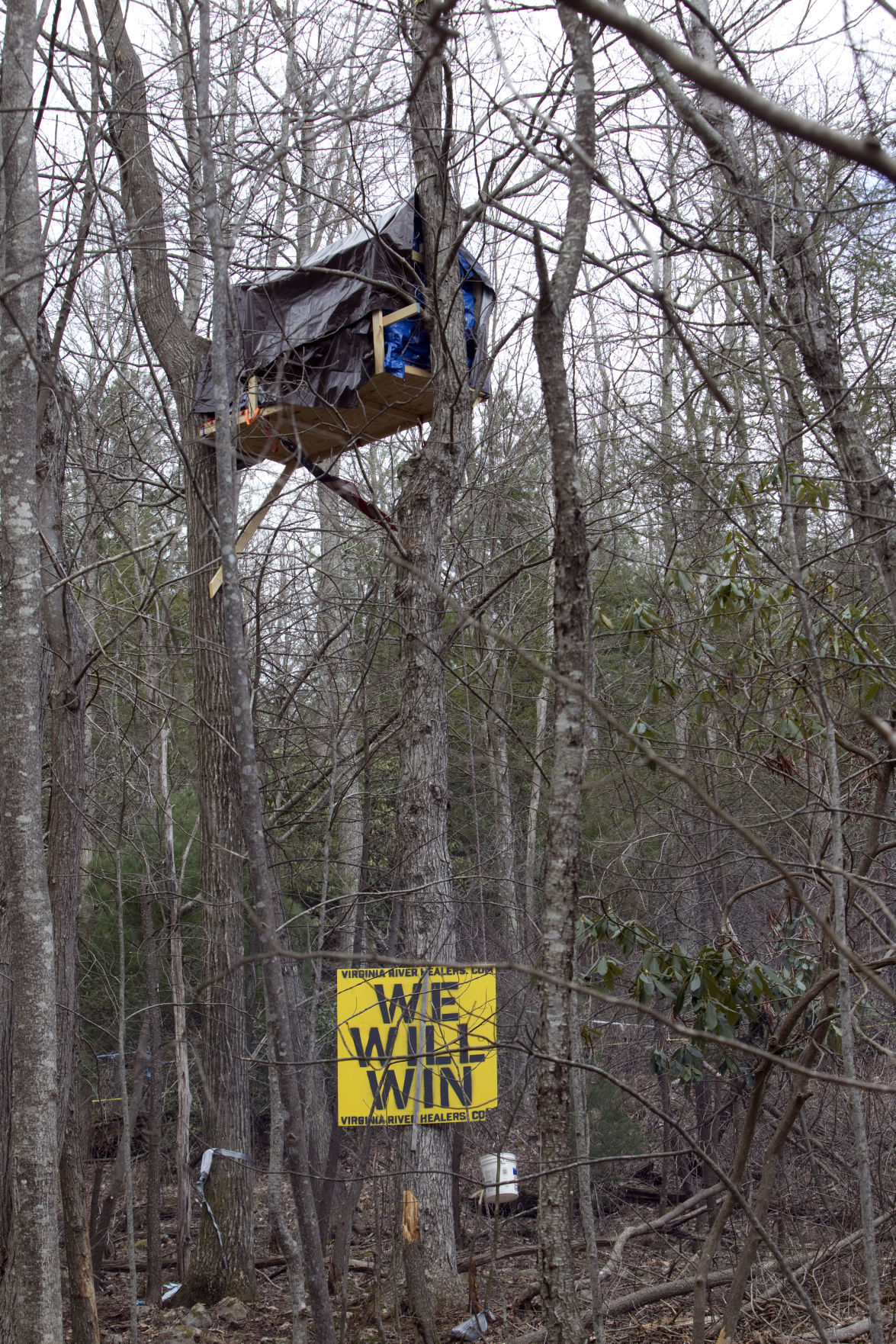 Theresa Ellen Terry, 61, has been sitting in a tree stand for more than two weeks. 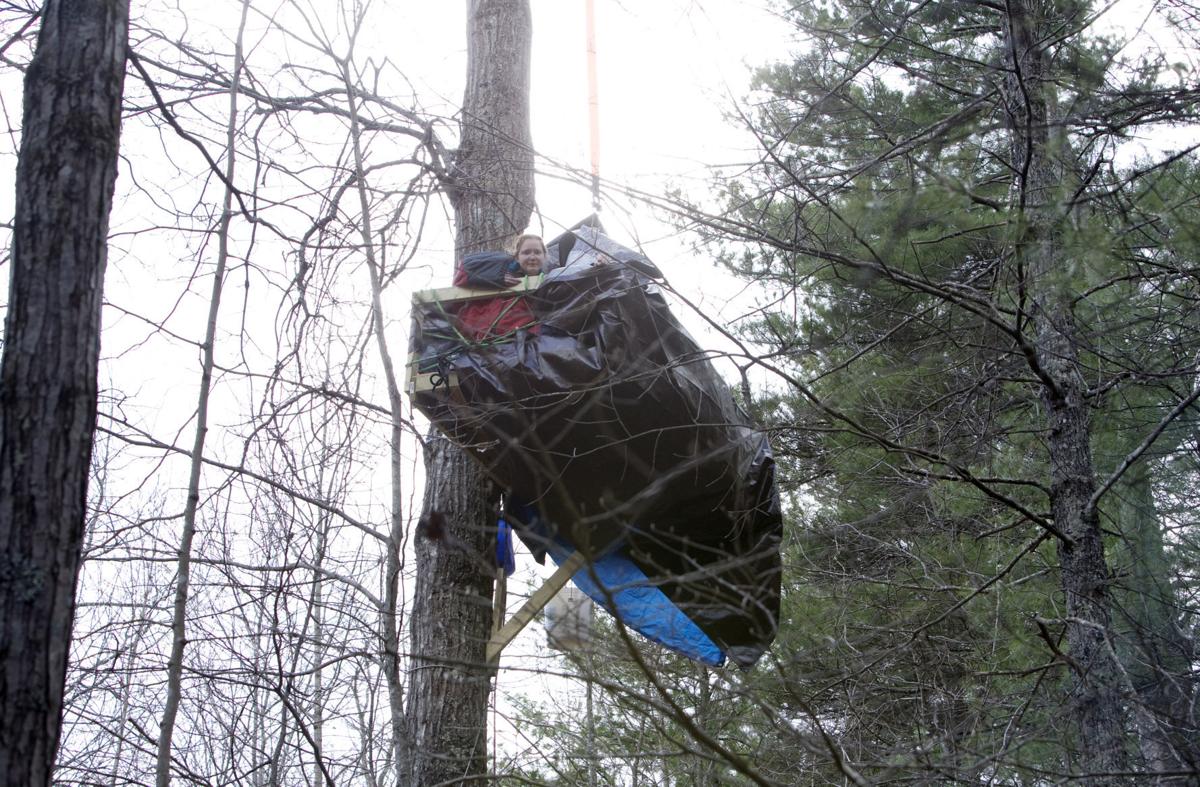 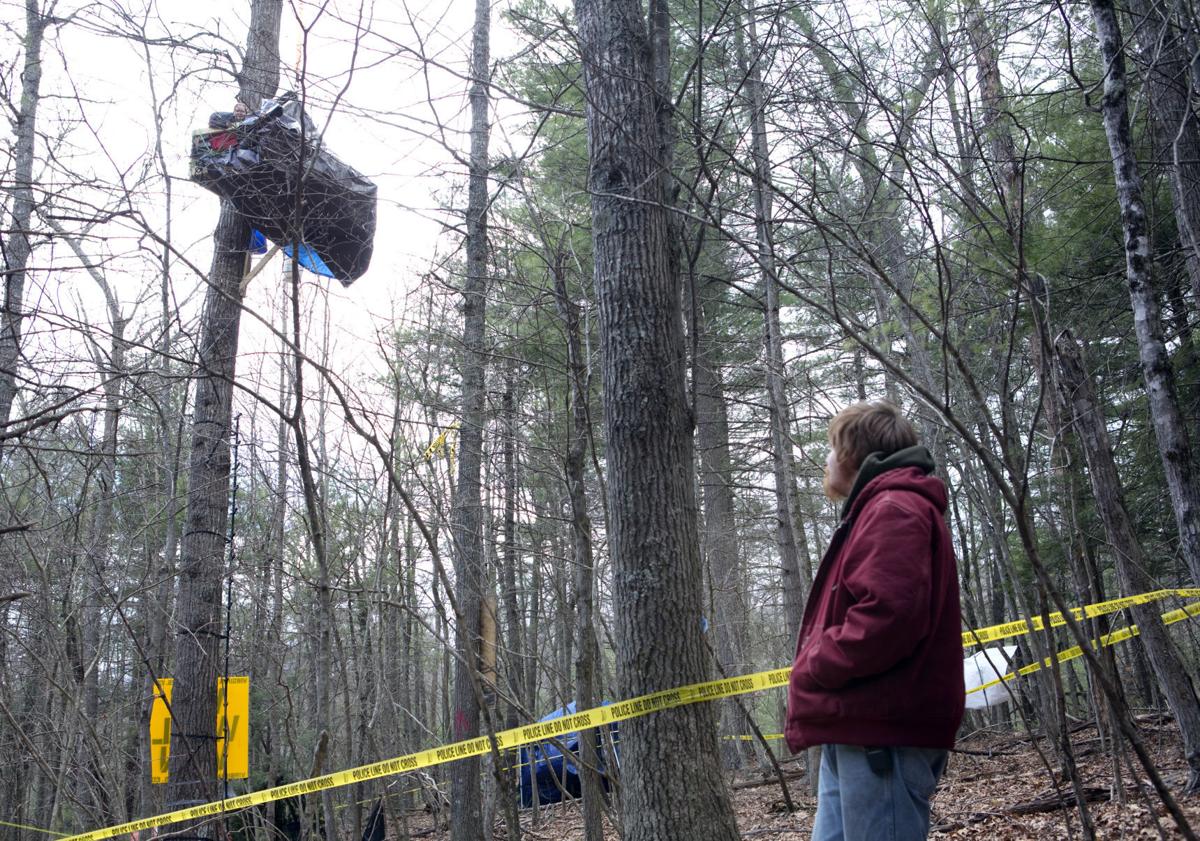 Coles Terry, 29, looks up to his sister, Theresa Minor Terry, 30, in her tree stand on April 19. She was unable to charge her phone, so Coles read her news and books. 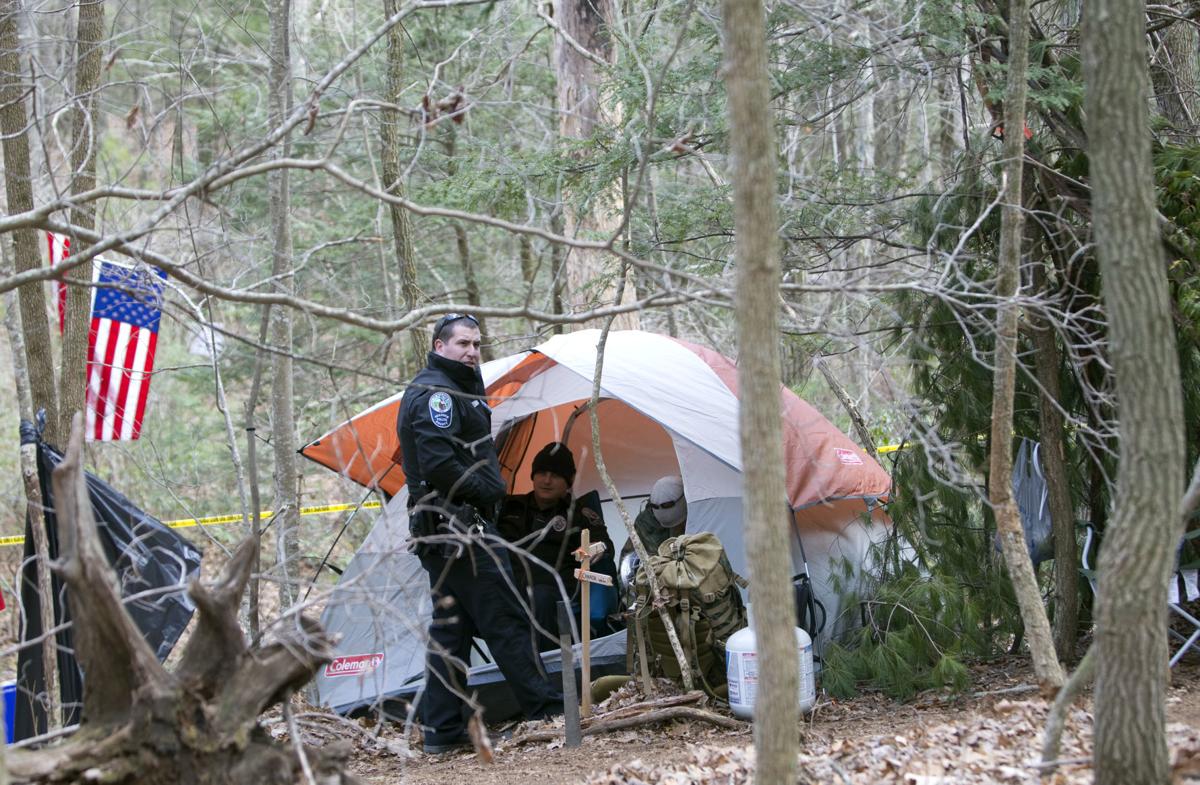 Roanoke County police have their own camp below the tree stand of Theresa Minor Terry, who, along with her mother, is trying to block a natural gas pipeline from crossing their family's land. Criminal charges have been filed against both of the Terrys.

Since tree-cutting began for the Mountain Valley Pipeline, local police have been faced with a new question: What to do when a protester climbs up a tree destined for a chainsaw and refuses to come down?

There seems to be no established protocol for such a situation in Southwest Virginia, where the closest thing has been the occasional call for a cat up a tree.

But according to law enforcement officials involved in similar standoffs elsewhere, the best response is the one being used here: avoid the use of force and wait the tree-sitters out.

In the Kalmath National Forest of Northern California in the late 1990s, several people opposed to logging and timber sales on public land camped out in tree stands for weeks in an effort to block tree-cutting.

Jay Power, a now-retired Forest Service law enforcement officer who was involved in the standoff, said authorities cut off the supply of food and water the tree-sitters were receiving from supporters on the ground. Then they shone bright lights at them all night long while cranking up country music on loudspeakers.

“We did everything we could to make them uncomfortable and make them want to come down out of the trees,” Power said.

In such cases, when determined but peaceful activists are high above the ground in tight quarters, trying to remove them forcefully can carry more risks than police are willing to take.

“I think we were meeting non-violent tactics with non-violent police work, with no intention of hurting anybody,” Power said.

Deb Strickland, a retired Forest Service officer in Montana, said similar tactics paid off when dealing with tree-sitters in the Bitterroot National Forest.

“Sooner or later, each one of them crawled down on their own,” Strickland said. “But it was a waiting game.”

With the Mountain Valley Pipeline, the waiting game began Feb. 26, when protesters occupied two trees in the path of the natural gas pipeline near the top of Peters Mountain in the Jefferson National Forest.

About a month later, a third protester positioned herself on a wooden platform suspended from a 50-foot pole planted in the middle of a Forest Service road, blocking heavy equipment that might be used by Mountain Valley construction crews.

All three protesters were holding their positions on Friday, despite complaints by Appalachians Against Pipelines, a group involved in the effort, that Forest Service officers have surrounded the stands and cut off supplies of food and water.

The protesters are violating an emergency closure order that was issued for public safety reasons along the pipeline’s right of way and other construction areas, according to Joby Timm, forest supervisor of the Jefferson National Forest.

Yet in a post to the Facebook page of Appalachians Against Pipelines, the woman indicated that her main source of water is the rainfall that she has funneled from the tarp covering her tree stand.

Forest Service officials have said they are monitoring the tree-sitters but have declined to elaborate on their plan for handling what they say is an ongoing investigation.

In Roanoke County, where a 61-year-old woman best known as Red and her daughter have been in tree stands since early April, police have also prevented supporters from sending food and water up to the women with a system of ropes and buckets.

But the county is taking steps to “ensure their physical needs are being met,” spokeswoman Amy Whittaker said in a statement Thursday.

Like the Forest Service, Roanoke County officials have declined to say what steps they might take to bring the matter to a close.

Despite being charged with trespassing, obstructing justice and interfering with the property rights of Mountain Valley, Theresa “Red” Terry and 30-year-old Theresa Minor Terry have said they have no intention of giving up to authorities.

The defiance that started with what is being called the Peters Mountain Stand appears to be spreading.

Earlier this week, three more tree-sitters took to the woods in an effort to block pipeline construction, this time on a Franklin County farm owned by Carolyn and Ian Reilly.

“There are too many ways this pipeline would destroy the ecosystem that preserves peoples’ livelihood here,” Carolyn Reilly said.

Reilly, who has been an active opponent of the pipeline project since it was announced more than three years ago, said the three tree-sitters on her land do not want to be identified. But they have the permission — and full support — of the landowners.

“This is about taking a stand,” Ian Reilly said. “This is about choosing for ourselves when the fight is over. MVP thought we would just resign when pipeline tree clearing began. But the fight has just begun, and we still believe we can stop this destructive project.”

Maj. Mike Bowman of the Franklin County Sheriff’s Office said deputies recently checked on the tree-sit but took no action because at this point there is no logging or other activity in the immediate area that is affected.

At least not yet, Mountain Valley contends.

In a motion filed Friday in U.S. District Court in Roanoke — where earlier this year the company used eminent domain to obtain easements through the land of the Reillys and nearly 300 others against their wishes — attorneys for the company argued that the tree-sitters are in the way of the pipeline and must be removed.

The motion asks that the Reillys and the tree-sitters be held in contempt of court.

By blocking tree-cutting along the pipeline’s route, the motion states, the protesters are violating an order from Judge Elizabeth Dillon. In a bitterly contested case, Dillon found that Mountain Valley can invoke eminent domain by virtue of an approval it received from the Federal Energy Regulatory Commission, which found there was a public need for the natural gas to be transported through the 303-mile pipeline.

Eminent domain, which allows the taking of private property for a public use, is more commonly employed by governmental bodies for projects such as highways or bridges.

In addition to seeking fines against the Reillys and the unidentified tree-sitters, Mountain Valley is asking Dillon to direct the U.S. Marshals “to take all necessary action to enforce the order, including removal of the tree-sitters.”

A similar action was filed against the Terrys.

“We have been patient in our attempts to consistently work with the handful of landowners that continue to impede MVP’s progress,” company spokeswoman Natalie Cox wrote in an email.

“We are now seeking additional relief under existing federal injunction orders that allow MVP to proceed with the project and prevent interference of the project’s construction activities.”

So far, she said, work on the pipeline is still on track to be completed late this year.

But if the protests continue, the wait-and-see practice employed so far by law enforcement officials may change.

Scott Parkin, who has followed tree-sit protests around the country as organizing director of the Rainforest Action Network, said efforts to remove protesters usually follow the same pattern.

“Often they will cut off their ground support, so it’s an attempt to starve them out,” he said.

Yet law enforcement officials must be mindful of the First Amendment rights of the tree-sitters, he said, who in most cases remain nonviolent while taking a stand on public land or private property with the permission of the landowners.

As word of the movement spreads, the tree-sitters and their supporters seem more emboldened to defy what they see as unjust court orders and regulatory actions allowing the pipeline projects to move forward.

For all the arguments that such projects will boost local economies and provide a needed energy supply, opponents respond with counter arguments of environmental damage, increased use of fossil fuels and property rights violations.

“I can see around the country that the [Mountain Valley] protesters are really supported,” Parkin said, “and they are seeing the momentum build.”

Roanoke man charged in Tuesday night shooting on I-581

Brent Lamont Dinkins, 21, is accused of malicious wounding in an altercation believed to have happened on Interstate 581, officials said.

Early voters in region say it should continue

The early voting and request for absentee ballots in Montgomery County reflects a statewide trend.

Theresa Ellen Terry, 61, has been sitting in a tree stand for more than two weeks.

Coles Terry, 29, looks up to his sister, Theresa Minor Terry, 30, in her tree stand on April 19. She was unable to charge her phone, so Coles read her news and books.

Roanoke County police have their own camp below the tree stand of Theresa Minor Terry, who, along with her mother, is trying to block a natural gas pipeline from crossing their family's land. Criminal charges have been filed against both of the Terrys.