This computer simulation from Apex Clean Energy shows what the Rocky Forge Wind Farm would look like from a residence 1.1 miles away, but the recently approved revisions to the plans call for taller turbines. 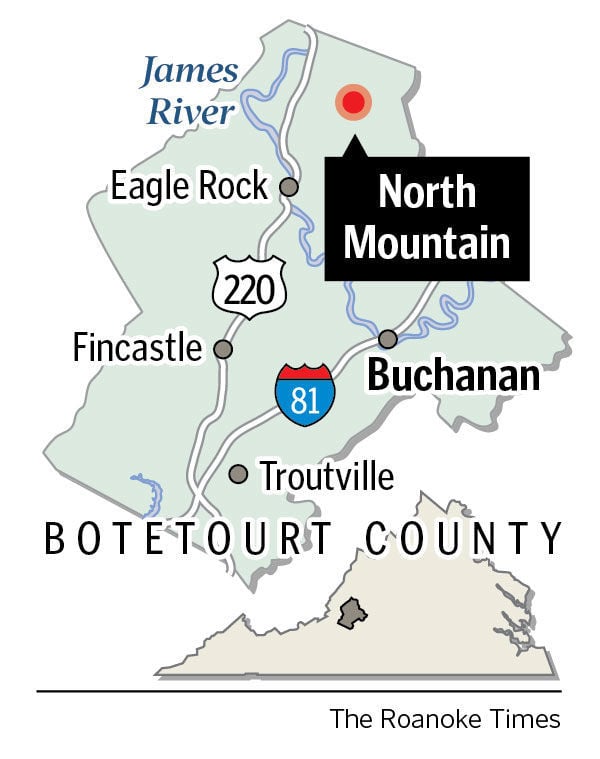 In October, Apex Clean Energy asked for a change to its permit that would allow for the construction of fewer, taller turbines.

Instead of the original proposal of 25, 550-foot tall turbines along the North Mountain ridge top, Apex wanted to build up to 22 that would be 680 feet high, about as tall as a 50-story building.

At the end of a four and a half hour public hearing over planning commission recommendations that featured speeches from critics and supporters, the decision just before 10:30 p.m. Tuesday of whether to approve the Charlottesville company’s request came down to a series of four votes, and in three of the four votes, the normally harmonious board split 3-2 in favor.

“It was 3-2 this time. Last time it was unanimous,” said Daleville resident Bill Van Velzer, an opponent of the Rocky Forge project. “That tells me that the voice of reason didn’t go unnoticed.”

For Apex, the immediate next step involves seeking more permits, this time with the Virginia Department of Environmental Quality. But in terms of advancing Rocky Forge toward completion, “it’s a huge milestone,” said Karlis Povisils, the company’s senior vice president of development.

For any project like this, the most important pieces are “getting your local permit and getting your power sold,” Povisils said. “Rocky Forge now has both of those.”

Botetourt supervisors first approved plans by Apex Clean Energy to build the Rocky Forge wind farm in 2016, but Apex didn’t find a buyer for the 75 megawatts of electricity the turbines will produce until 2019. Dominion Energy agreed to purchase the power and sell it to the state as part of a green energy package.

By then, Apex asserted, technology had advanced to the point where the wind farm could generate the same power at a more competitive price using taller turbines, and they wouldn’t need to build as many, reducing the effect on the environment.

The company’s request reactivated the debate, pitting supporters — including wind energy advocates and the owner of the North Mountain land and his family — against advocates for preservation of scenic views and residents from Botetourt and Rockbridge concerned about plummeting property values, noise and the potential for bird fatalities.

The 22 speakers were evenly divided for and against.

Among those who weighed in on the side of Apex, state Del. Terry Austin, R-Botetourt, provided a statement, read aloud by board Chairman Billy Martin, that mentioned the General Assembly recently passed legislation requiring utilities to deliver energy from 100% renewable sources by 2045.

“Choosing to diversify our energy portfolio with Virginia’s first functional wind farm will establish Botetourt County as a leader in this effort.”

The most vocal critic, however, proved to be Amsterdam District Supervisor Steve Clinton, who described the proposed wind farm as having “overstated benefits and understated costs,” suggesting “maybe this isn’t worth it.”

Martin, who represents the Blue Ridge District, stated that he supported wind energy but opposed the height increase. He also expressed exasperation that Apex still hasn’t secured passage to transport the massive turbine parts up the mountain, telling company representatives, “You’ve had four and a half years to get a right of way.”

Yet during the deciding votes, Clinton and Martin were outnumbered. The first two votes involved changing the county code for wind energy systems to allow for maximum turbine heights of 680 feet and a substation of up to 100 feet.

Bailey responded to Clinton that although he could question the degree of benefits the county will gain from Rocky Forge, the benefits will be genuine.

“Green energy is real,” he said. “It’s undeniable that it’s the future as we move forward.”

“This is effectively approving the project,” Clinton warned.

Clinton said afterward that he hoped Apex would take the opportunity to engage in community outreach and invest in the county beyond the North Mountain property. He said he worried Rocky Forge could open the door to other ridge top projects.

Tall wind turbines in Botetourt will pose no hazard to aircraft, FAA determines

In a step forward for a proposed wind farm in Botetourt County, the FAA has determined that turbines reaching as far as 680 feet into the sky from the top of a mountain would “not constitute a hazard to air navigation.”

If wind turbines are allowed to tower up to 680 feet into the sky from a Botetourt County mountaintop, they would be higher than the tallest o…

This computer simulation from Apex Clean Energy shows what the Rocky Forge Wind Farm would look like from a residence 1.1 miles away, but the recently approved revisions to the plans call for taller turbines.