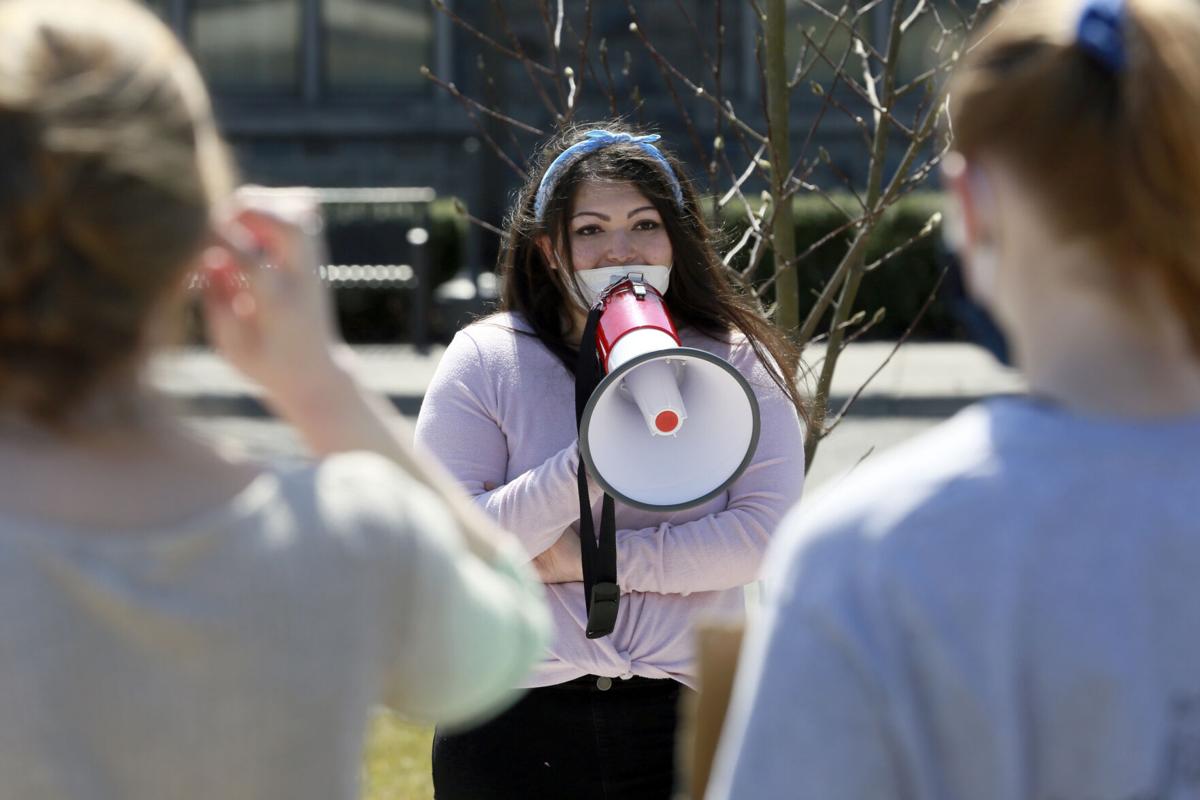 Virginia Tech senior Rachel Spector, 21, shared her story about how she became involved and motivated in addressing the climate issue during a student demonstration Monday. 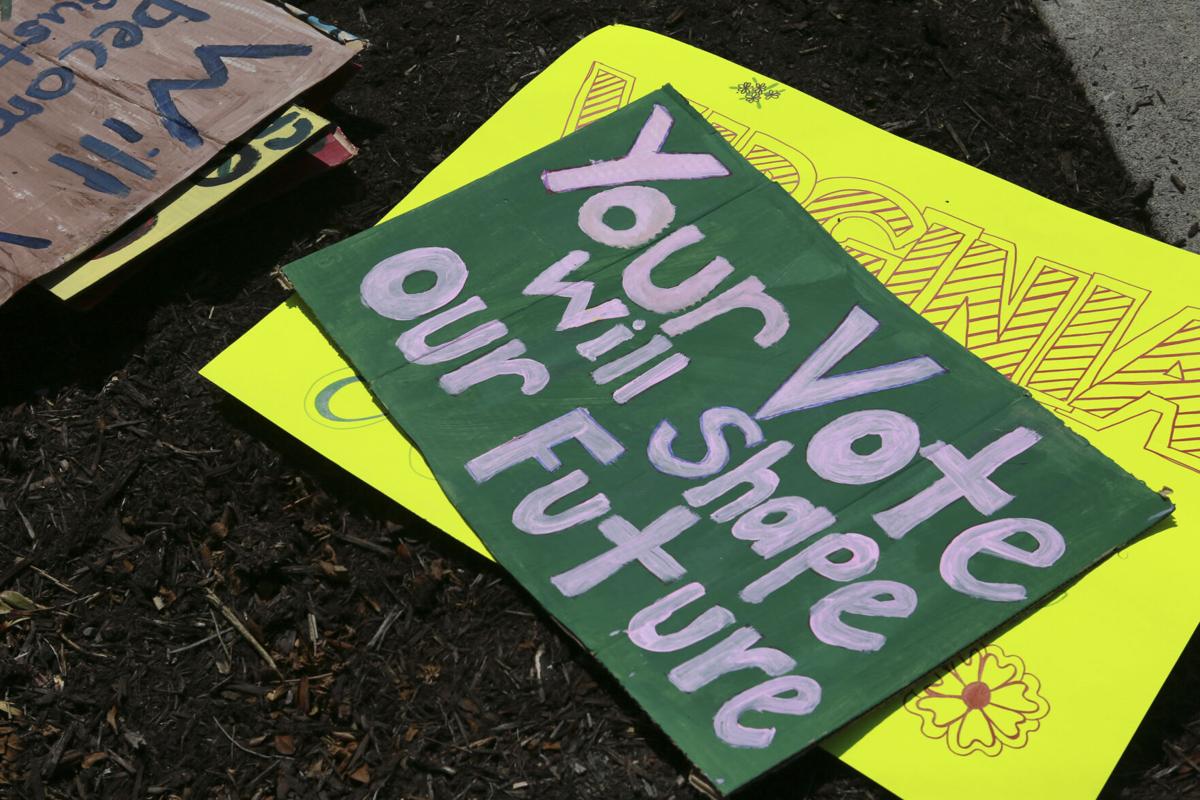 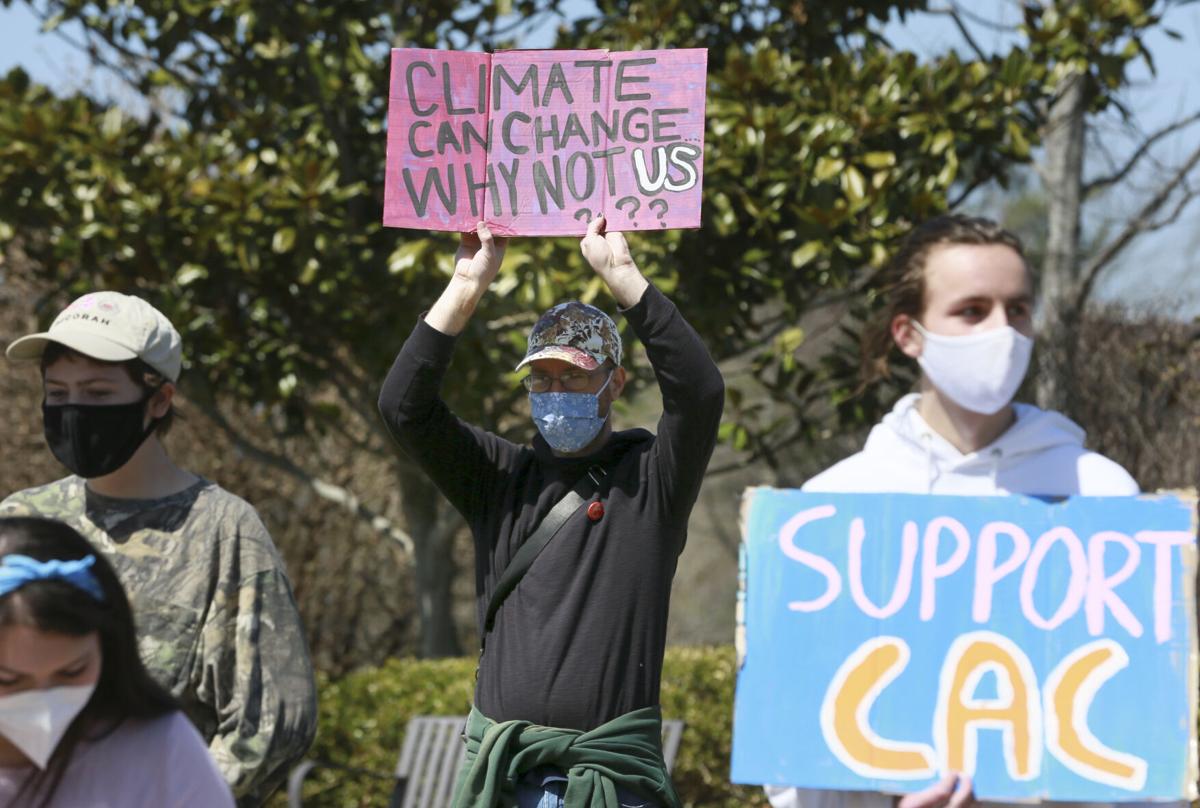 Clyde Marshall, center, of Pembroke, was one of about a dozen members of Virginia Tech for Climate Justice that held signs and shared stories and slogans in support of a climate initiative approved by Virginia Tech’s Board of Visitors on Monday. 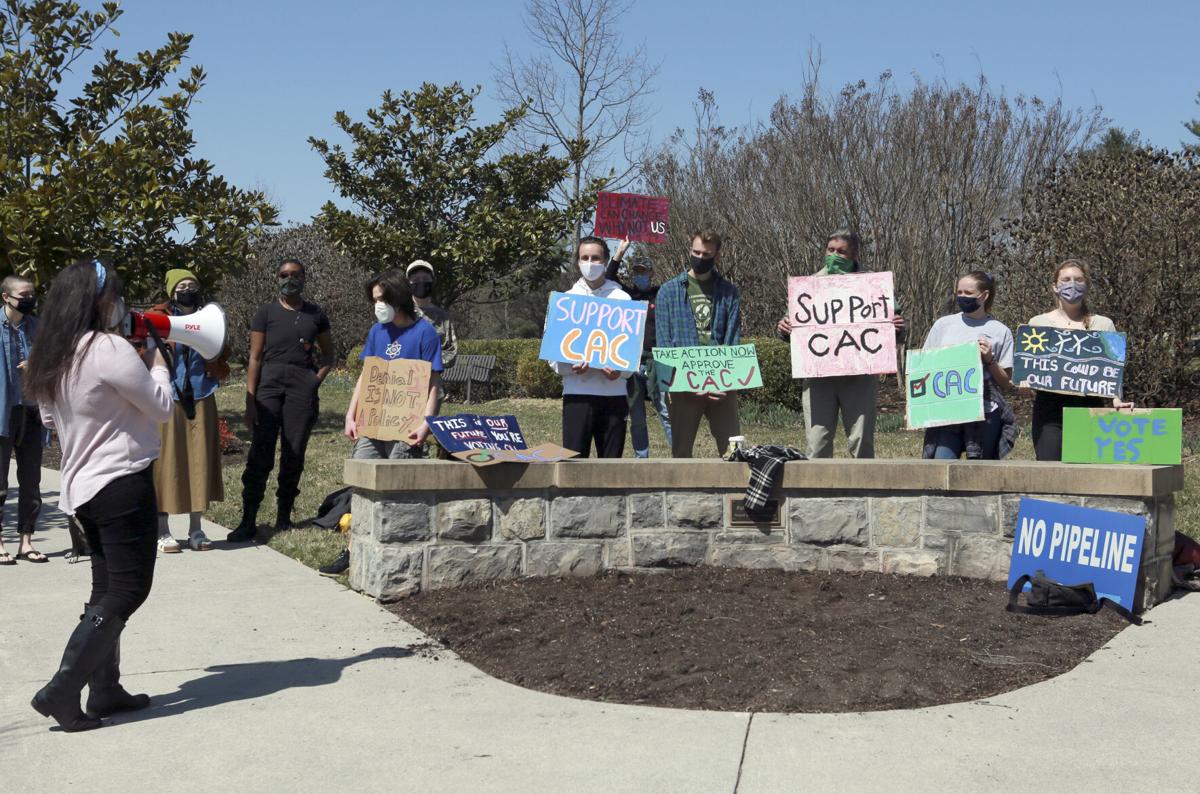 Virginia Tech senior Rachel Spector, 21, left, speaks as about a dozen members of Virginia Tech for Climate Justice hold signs and shared stories, slogans and songs in support of a climate initiative approved by Virginia Tech's Board of Visitors, which met at the Inn at Virginia Tech Monday.

BLACKSBURG — A handful of students gathered outside the Inn at Virginia Tech on Monday afternoon, holding homemade signs and chanting call-and-responses.

And, for the most part, they got it.

Virginia Tech’s governing board on Monday adopted an ambitious climate action plan for the university’s campus to become carbon neutral by 2030.

Approval by the Board of Visitors marked the final stage in a monthslong slog to update the university’s decade-old plan to reduce greenhouse gases.

Among 15 goals, the plan calls on Tech by 2030 to use 100% renewable electricity; become a zero-waste campus; reduce transportation-related greenhouse gas emissions by 40%; and achieve carbon neutrality on campus and in agricultural and land-use operations.

“I hope it’s the beginning of aggressive climate action for the university, and I’m excited to see the process of its implementation,” said Rachel Spector, a 21-year-old senior involved in the group Virginia Tech for Climate Justice who helped organize the gathering of a dozen students Monday.

Tech President Tim Sands in November 2019 said the university would form a group of students, faculty and administrators tasked with updating Tech’s Climate Action Commitment, which was devised in 2009 and largely kept intact in 2014.

Two months earlier, the Virginia Tech for Climate Justice group arranged a march in Blacksburg as part of youth-led climate strikes across the globe in September 2019.

Nationwide, more than 100 colleges and universities — including the University of Virginia and the College of William and Mary — have announced goals to achieve carbon neutrality by 2030, John Randolph, chair of the climate committee, told the Tech board Monday.

Tech’s plan will involve a combination of rooftop solar panels on campus and through what’s called power purchase agreements, in which the university would buy solar-powered electricity through another party, such as American Electric Power.

After hearing an update on the climate group’s plans in November, the university’s board had asked for more financial details.

Between December and March, university officials worked on a financial analysis on the plan, Randolph said.

“The 100% renewable electricity goals emerged as the pathway with the most variability,” he said.

The climate group then considered a range of scenarios, with the university owning all its own solar power or buying it all through a third party.

Randolph said the group recommended a combination, with the university responsible for solar panels generating about 2.3 megawatts.

One megawatt of solar energy can power around 150 to 200 homes, according to the Solar Energy Industries Association, a trade group.

Before 2050, the university would actually end up saving an estimated $24.8 million through that plan, Ibeziako said.

The university would pay less if it just bought all its solar energy needs from third parties, according to that plan, which would cost an estimated $37 million up front with an eventual $26.3 million in savings.

But the group believes it’s important for Tech to build its own solar panels on campus property.

“The primary benefit is really educational. Having ownership and control of some solar capacity on our campus will allow us to create a renewable energy ... living laboratory and for instruction,” as well as opportunities for outside grants, Ibeziako said. “Last but not least, it gives us that visible showcase of our commitment on campus and also in the community.”

The university did not seek any new funding tied to the Climate Action Commitment, but would instead use its annual budget process to fund the goals.

The plan for carbon neutrality by 2030 — and a goal to eliminate carbon offsets and fossil fuels completely by 2050 — is far more aggressive than the previous plan. Tech’s original climate plan sought to reduce emissions to 80% below 1990 levels by 2050.

Spector, the student activist, said students showed up Monday to celebrate and show gratitude for all the work put into the plan from students, faculty, staff and community members.

Spector said she’s “very happy” with the goal for carbon neutrality by 2030. She did note the plan does not call on the university’s foundation to divest its endowment from fossil fuel money, for which students had advocated.

Before the board’s vote, outside the hotel, Spector urged students to continue the fight against climate change.

“This can’t be the end,” Spector told the students. “We can’t be complacent because of the Climate Action Commitment.”

Virginia Tech senior Rachel Spector, 21, shared her story about how she became involved and motivated in addressing the climate issue during a student demonstration Monday.

Clyde Marshall, center, of Pembroke, was one of about a dozen members of Virginia Tech for Climate Justice that held signs and shared stories and slogans in support of a climate initiative approved by Virginia Tech’s Board of Visitors on Monday.

Virginia Tech senior Rachel Spector, 21, left, speaks as about a dozen members of Virginia Tech for Climate Justice hold signs and shared stories, slogans and songs in support of a climate initiative approved by Virginia Tech's Board of Visitors, which met at the Inn at Virginia Tech Monday.