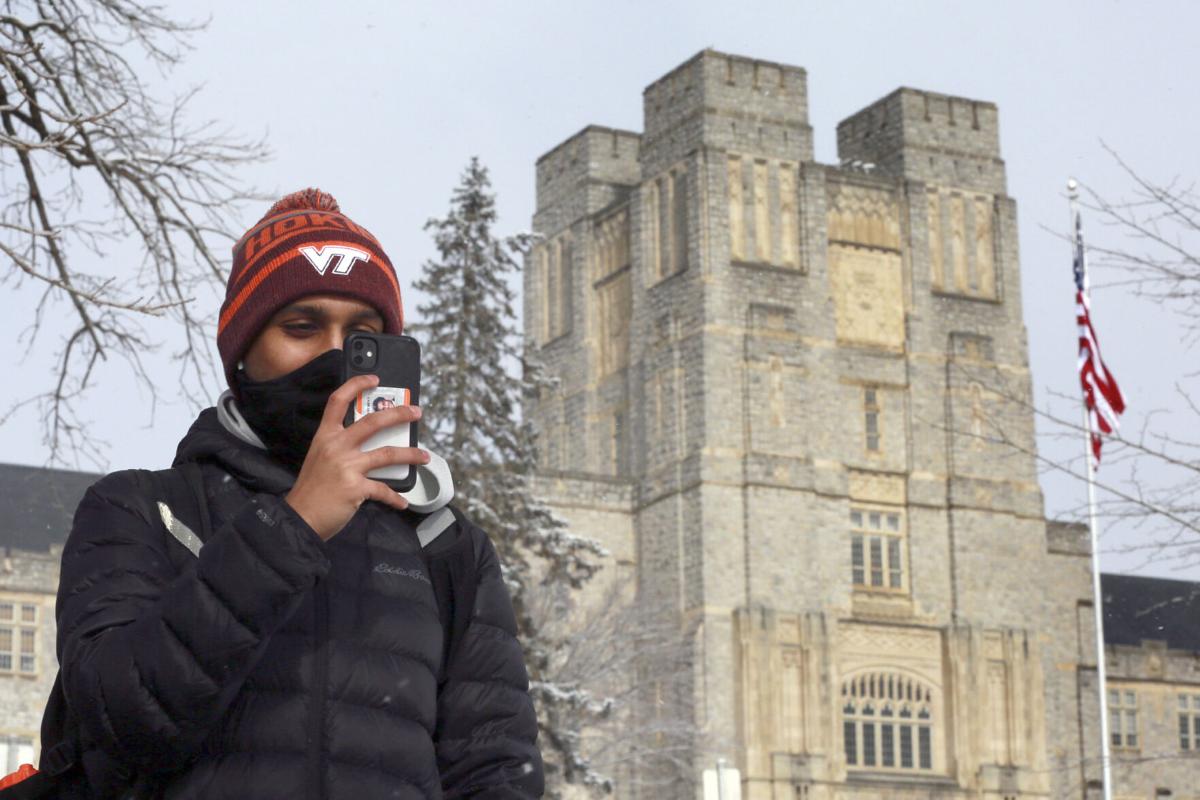 Chiraag Potharaju, a Virginia Tech freshman from Northern Virginia, takes pictures of a snow-covered campus with his phone Thursday. This year, the university received more than 40,000 applications. 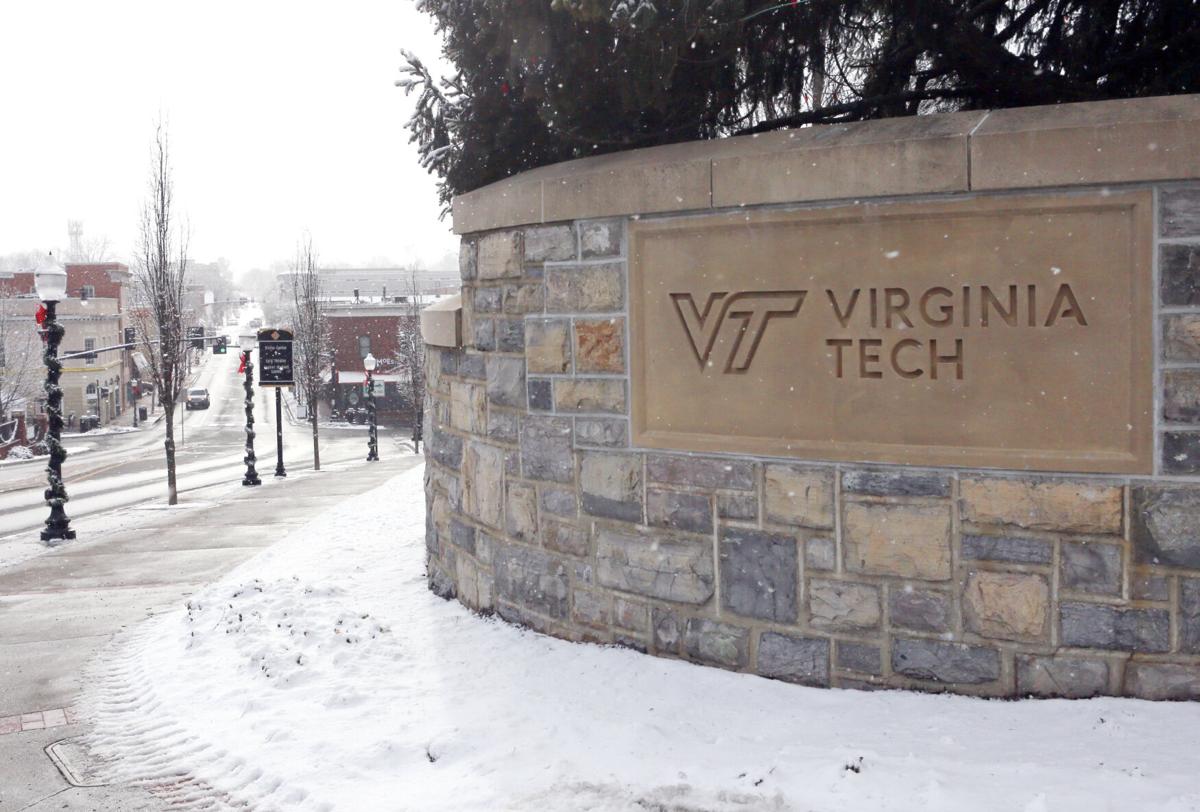 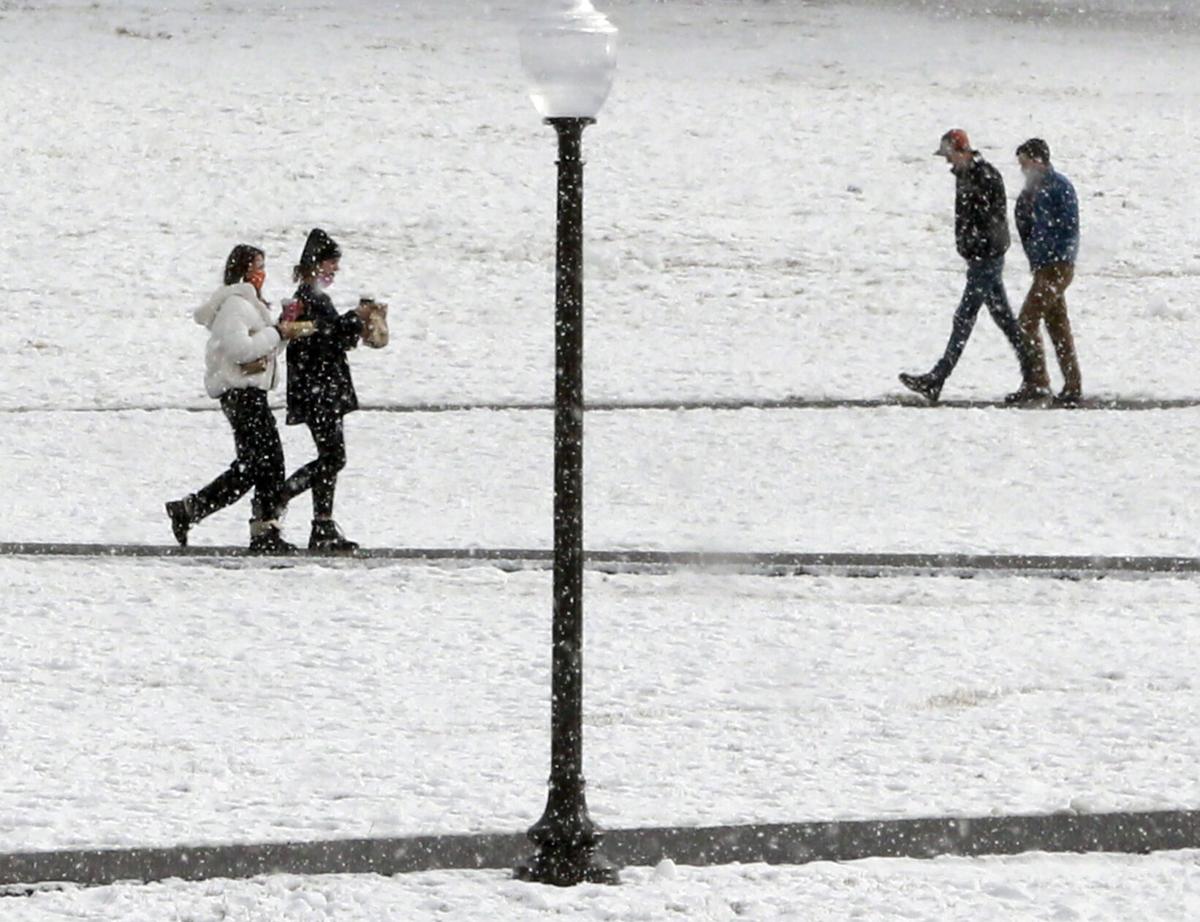 Virginia Tech students crisscross a snow-covered campus on Jan. 28. On Thursday, Tech’s dashboard showed that 163 students and seven employees had tested positive for COVID-19 in the previous seven days.

Applications to Virginia Tech have exploded.

When the university garnered national headlines in 2019 by enrolling hundreds more freshmen than expected, a record 31,974 prospective students had applied to the school.

This year, the university has received 42,084 applications.

Pandemic uncertainty and the option—instead of requirement—to submit standardized tests have helped boost applications at top-tier schools nationwide, with those such as the College of William and Mary, New York University and Harvard University all reporting record-breaking numbers this year.

But college admissions hasn’t been spared by inequality inflamed by the pandemic and economic crisis. Nationally, low-income and first-generation students have not applied at higher rates, and some less-competitive schools are seeing a decline in applications, according to Inside Higher Ed, a news site.

Virginia Tech is not one of those. The record interest reflects a 36% increase in applications from when 30,875 applicants sought admission at the same time last year.

“I think where we were most pleased in the increases wasn’t necessarily the overall application number than in the underrepresented and underserved groups,” said Juan Espinoza, Tech’s director of undergraduate admissions, who credited recent policies easing the application process with the surge.

“As a first generation student myself, as an underrepresented student who graduated from Virginia Tech, this is exactly what needed to be done, is making sure that we removed these barriers.”

The number of applicants to Tech identifying as Black or African American increased 75% from the previous fall. Interest from Hispanic and Latinx applicants increased 43%. And first-generation college applications surged 47% from the year before.

Changes the admissions office enacted in 2018 are paying off, Espinoza said. Those include introducing an application form used by multiple colleges; providing fee waivers for some applicants; and allowing applicants to report their own grades initially, so that students don’t have to wait on, and pay for, their high school to provide a transcript up front.

“I was really pleased to see that the work we have been doing for three years has really come to fruition now,” Espinoza said. “I have yet to come across another [admissions] director that has seen this much increase in their diversity and first-generation students.”

But Tech is not alone in seeking a more diverse applicant pool. And the unprecedented pandemic year has introduced a myriad of factors reshaping the application process.

“All schools are trying to do a better job in terms of access, and thank God they are,” said Parke Muth, a college admissions expert who worked in the University of Virginia’s admissions office for 27 years. “That’s not a Tech thing. That’s an everybody thing.”

For the first time this year, though, Tech has added another application form, the Common App, which is used by hundreds of schools nationwide. Schools that join the Common App typically see an 8% to 12% increase in applications, Espinoza said, and, “we’re well past that.”

Tech also this year made it optional for prospective students to submit scores from standardized tests like the SAT and ACT. About 47% of applicants chose not to submit scores, Espinoza said.

Many colleges dropped the test requirement this year because testing centers closed or cancelled exams amid the pandemic.

“The testing is the big one, but so is the uncertainty,” Muth said about increases in applications. “If you’re living in Virginia, I always tell people this, and you’re not applying to state schools, then you’re stupid. It’s such a great state system.”

This year, more students are hedging their bets by applying to more colleges, experts say. The current job market can also make college look more attractive, Muth said, with restaurant work and gap years made dicey by the pandemic.

Nationwide, applications through the Common App increased 10% from last year, to 5.6 million submissions, according to Inside Higher Ed. But Common App leaders told colleges they remain “very concerned about the decline among fee waiver and first-generation applicants,” the site reported.

At Virginia Tech, last year’s incoming Class of 2024 was the most diverse in its history. President Tim Sands said in his State of the University address this month that the school is close to achieving its goal of having 40% of an entering class be low-income, first-generation, veteran or underrepresented minority students by 2022.

But this year’s spike — with 10,000 more applications — could give Tech an aura of exclusivity, by driving down its admissions rate.

Espinoza says it’s too early to say whether Tech’s rate of offering admissions will actually drop. The university could see an unprecedented increase in the number of students who are offered admission but don’t end up attending. In recent years, Tech’s admission rate has fluctuated around 65% to 70%. Typically, about a third of students accept admission offerings.

Espinoza also insists the university is working hard to avoid a repeat of 2019, when a thousand more freshmen accepted Tech’s offer than expected.

“This is a high priority: We want to make sure that we do not go past 30,000 undergraduates,” he said. “We put together an effective strategy to ensure that we don’t do that, that we are right on target and that we stick to that. That is our strategy that we do not end up in any sort of over-enrollment scenario.”

Admissions officers will keep a close eye on how offers turn into acceptances, Espinoza said, with an eventual goal of enrolling 6,675 new students in the freshman class.

Mayor Shannon Collins and Blake Le have cultivated a unique business in the downtown.

Chiraag Potharaju, a Virginia Tech freshman from Northern Virginia, takes pictures of a snow-covered campus with his phone Thursday. This year, the university received more than 40,000 applications.

Virginia Tech students crisscross a snow-covered campus on Jan. 28. On Thursday, Tech’s dashboard showed that 163 students and seven employees had tested positive for COVID-19 in the previous seven days.