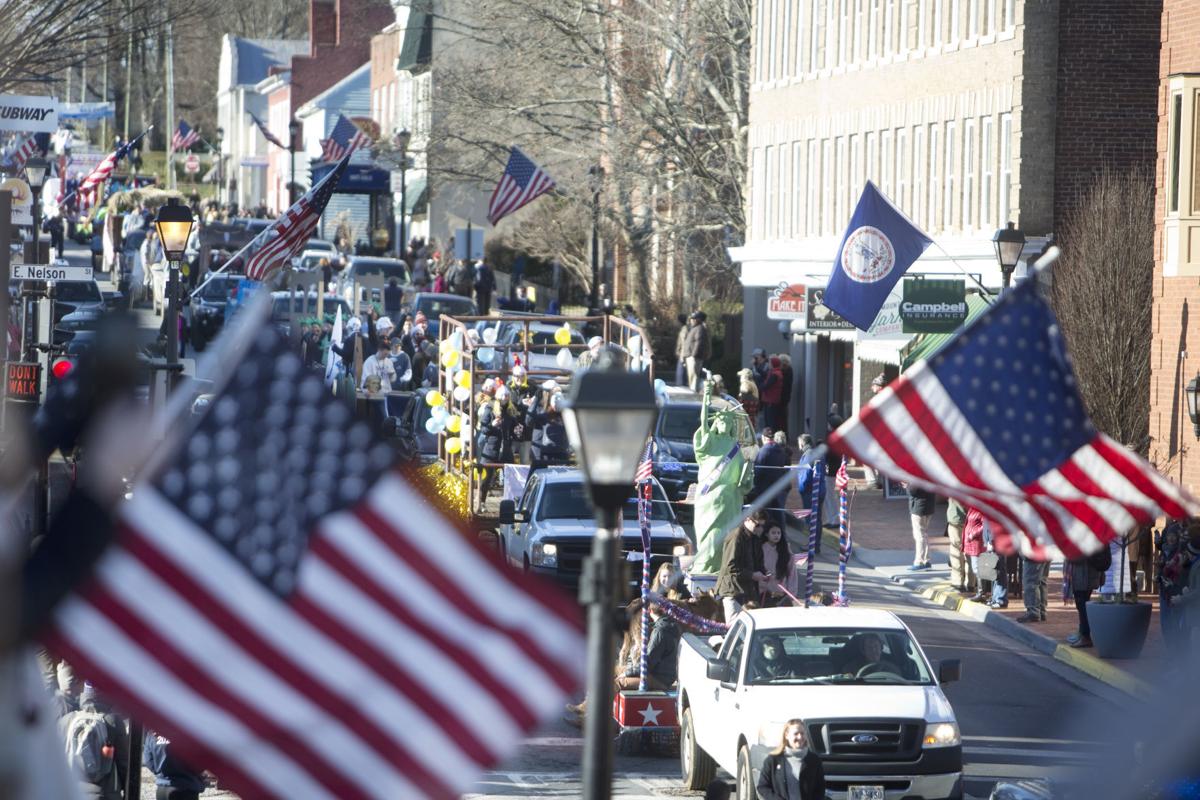 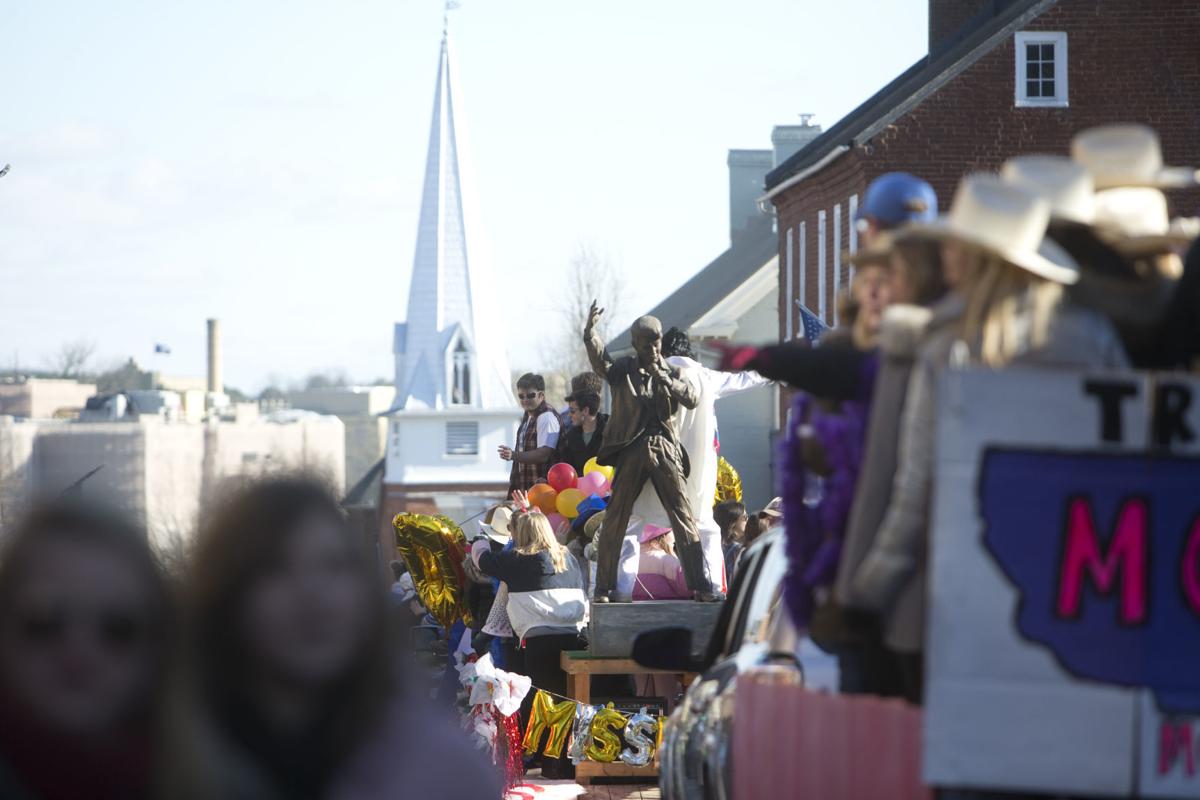 Mississippi is represented by Elivs Presley, aka Mark Cline, a local artist who constructed the statue at the rear of the float as part of Washington and Lee University's Mock Convention parade on Feb. 14, 2020. Presley was born in 1935 in Tupelo, Miss. 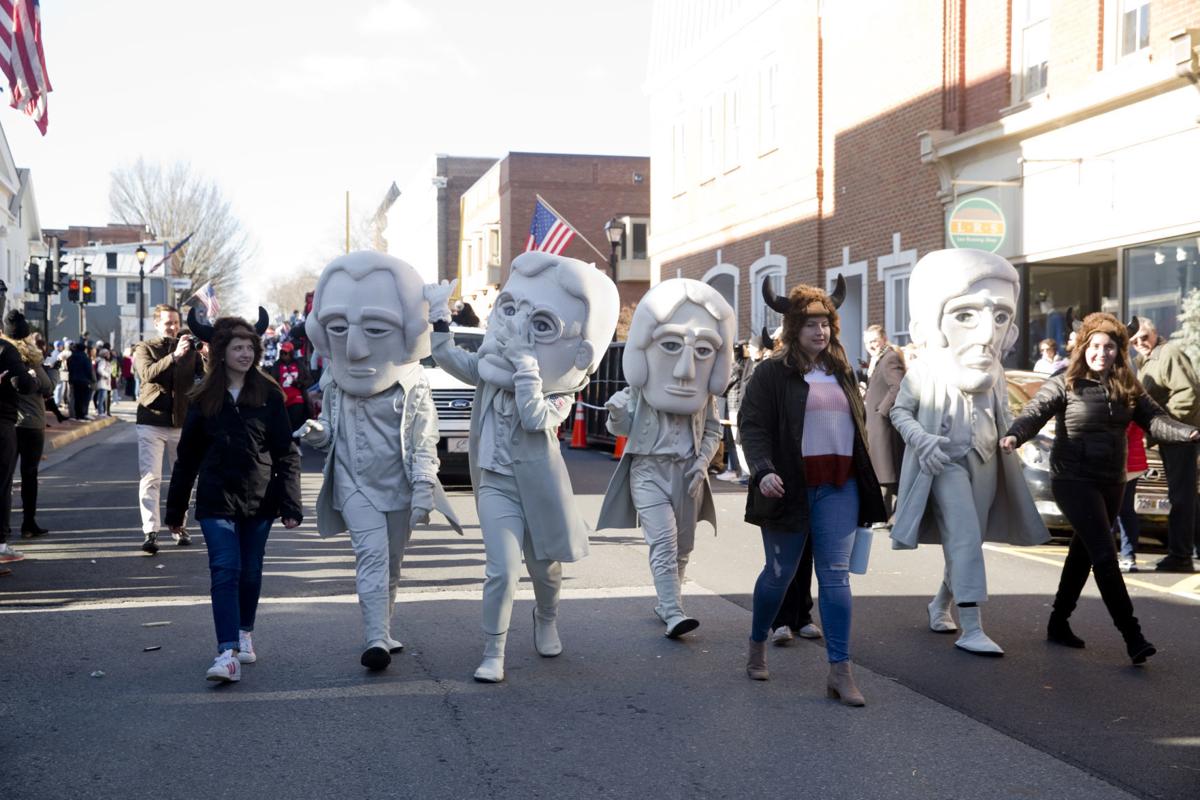 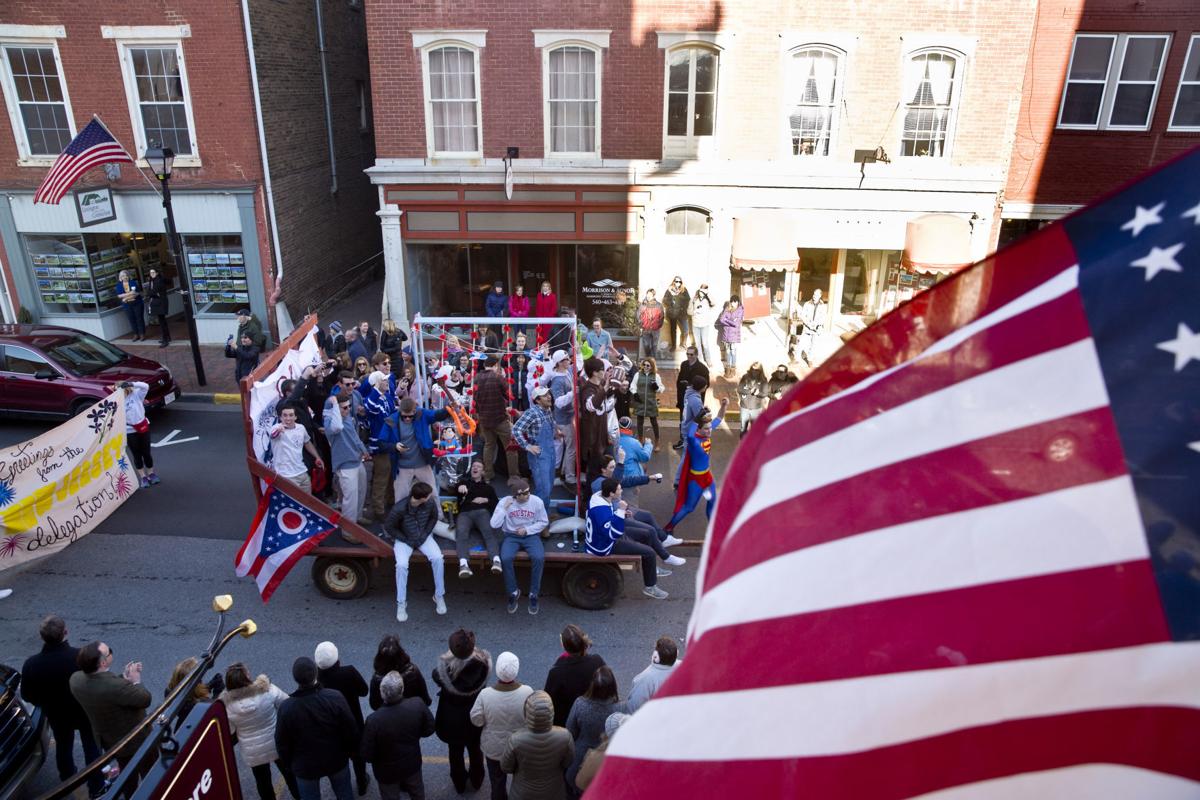 Washington and Lee University's Mock Convention parade rolled down Main Street in Lexington on Friday morning, with most if not all U.S. delegations represented. Creatively constructed themed floats entertained the cheering crowd. 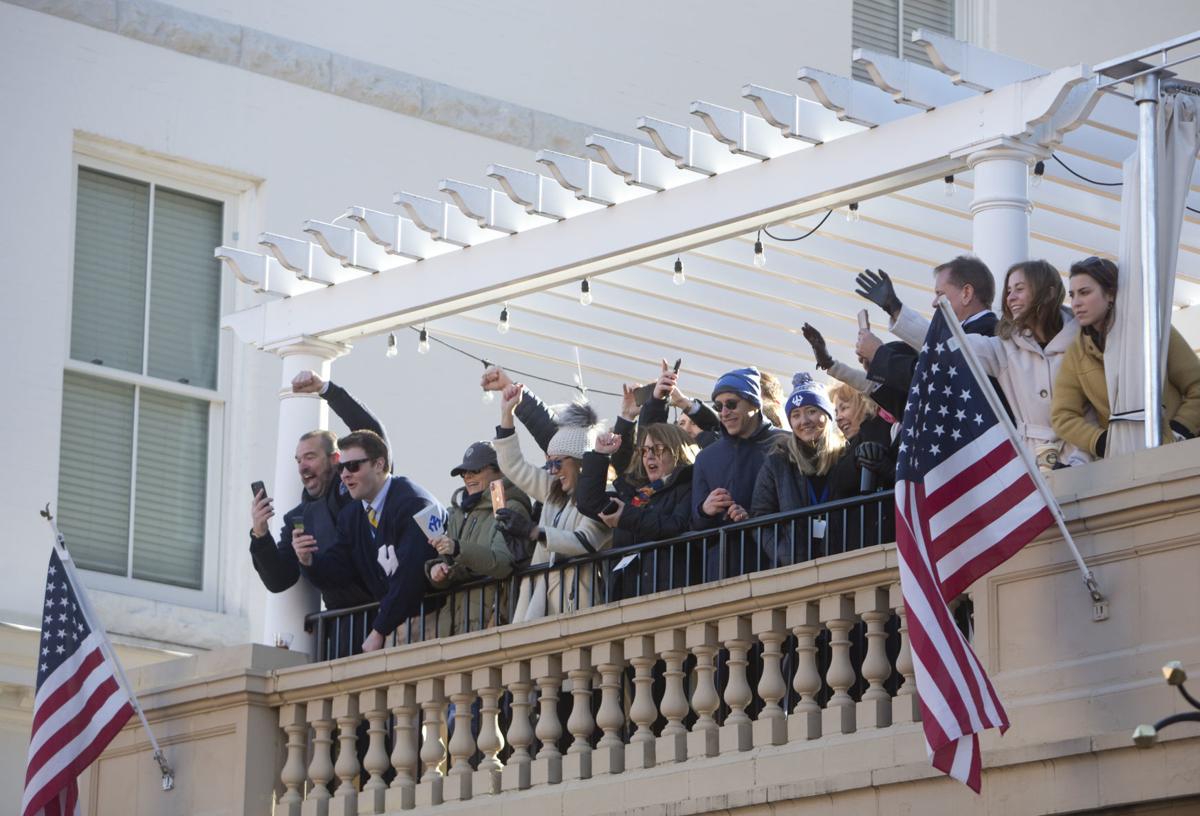 Alumni, students, parents and guests of Washington and Lee University’s Mock Convention watch the parade from the balcony of the Robert E. Lee Hotel on Main Street in Lexington on Friday morning. For more photos, visit roanoke.com. 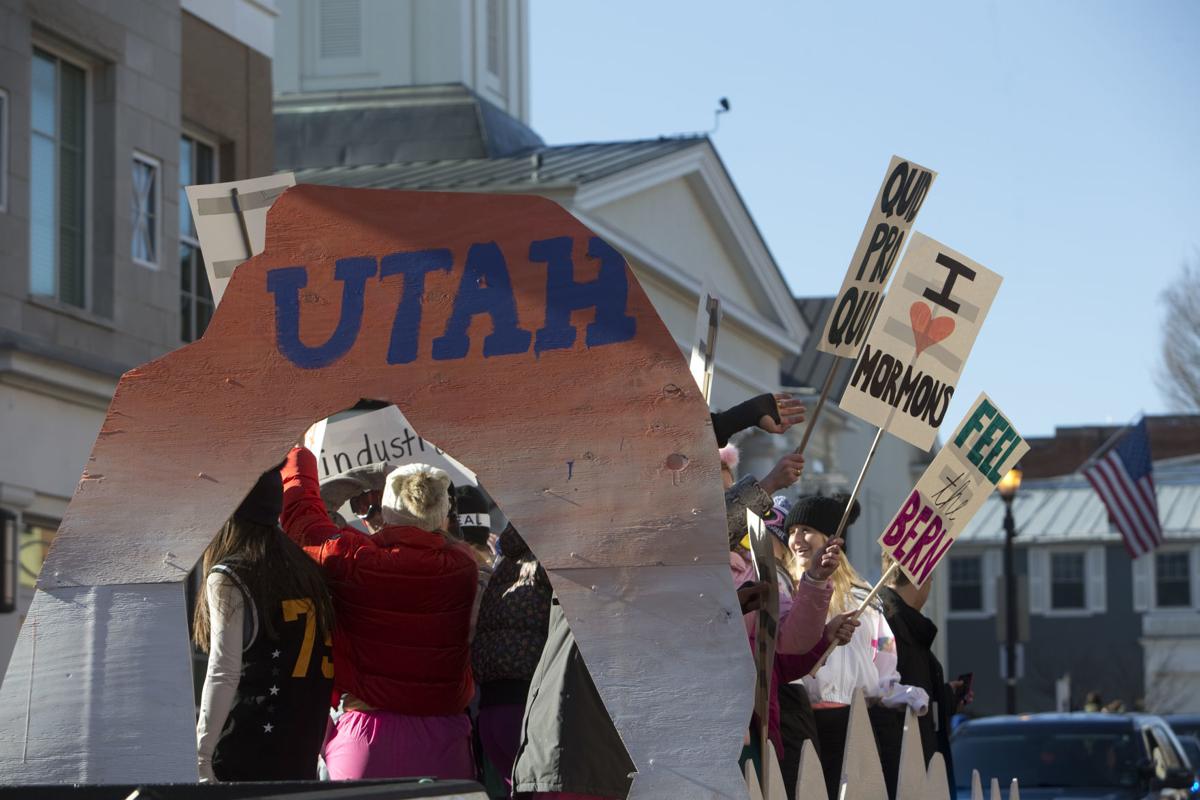 Members of the Utah delegation float carry signs in the Washington and Lee University’s Mock Convention parade on Friday in downtown Lexington.

Mississippi is represented by Elivs Presley, aka Mark Cline, a local artist who constructed the statue at the rear of the float as part of Washington and Lee University's Mock Convention parade on Feb. 14, 2020. Presley was born in 1935 in Tupelo, Miss.

Washington and Lee University's Mock Convention parade rolled down Main Street in Lexington on Friday morning, with most if not all U.S. delegations represented. Creatively constructed themed floats entertained the cheering crowd.

Alumni, students, parents and guests of Washington and Lee University’s Mock Convention watch the parade from the balcony of the Robert E. Lee Hotel on Main Street in Lexington on Friday morning. For more photos, visit roanoke.com.

Members of the Utah delegation float carry signs in the Washington and Lee University’s Mock Convention parade on Friday in downtown Lexington.

LEXINGTON — Anyone driving into Lexington on Friday morning about 8:30 a.m. likely saw a pickup truck headed the other way with a Statue of Liberty in the bed and someone in the driver’s seat who at a glance looked a lot like Elvis in sunglasses.

Odds are though that no one batted an eyelash, because it was just about time for the 2020 Mock Convention Parade. The parade is a longstanding, and occasionally eyebrow-raising, kickoff tradition for the mock political convention Washington and Lee University students hold every four years, culminating in an attempt to predict who the presidential nominee will be for the party that will challenge the incumbent.

Gathered on Wallace Street, the floats manned by the W&L student body represented all 57 delegations that will converge on the real Democratic National Convention in Milwaukee in July.

The miniature of the Statue of Liberty turned out to belong to the lead float in the parade, which also featured Tucker and Rufus, two small donkeys contentedly munching on pellets in representation of the Democratic Party theme. The “Elvis” was well-known local artist Mark Cline.

The New York float featured a Brooklyn Bridge cut out and street signs name-checking a number of the remaining Democratic presidential candidates. The sign for entrepreneur Andrew Yang, who dropped out of the race Tuesday as results from the New Hampshire primary came in, was crossed out with a note the road was closed. The Michael Bloomberg sign included a “runs late” warning.

W&L sophomore Joe O’Connor walked alongside the New York float wearing a Statue of Liberty crown. He helped paint some of the buildings on the side of the float.

The students who act as delegates from the various states use research to decide how much support each state will give to each candidate, a process that ends Saturday evening with the choice of a national winner. Not a delegate himself, O’Connor said he was keeping an open mind about the outcome. “I’m excited to see what everybody came up with.”

“We think it’s wonderful,” said Fran McMaster, a Roanoke resident. She and her rescue pit bull Ruby were walking alongside the Vermont float in support of her daughter, 21-year-old Elyssa, who studies computer science and art history at W&L.

The Vermont float also featured an appearance by the candidate who won the New Hampshire primary, Sen. Bernie Sanders — or perhaps it was 20-year-old Laurie Lee, an English and computer science major wearing a white-haired wig. Asked what subject they were studying, Lee-as-Sanders first answered “Socialism!”

The route turned through the streets of downtown Lexington, packed with people gathered to take pictures and cheer the students on. Margoth Bartenstein, a teacher with Shenandoah Preschool, supervised a gaggle of tiny, parka-clad children clearly engaged with the colorful pageantry. “It’s very fun for us. They like the candies and the noise,” she said. “It’s something fun to do in the morning.”

Walking alongside the floats did put one at risk of being pelted by candy, or by an orange if it was the Florida float, which also featured an operating barbecue grill. Freshman politics and journalism major Cassie Robinson, 18, kept pace with the District of Columbia float, tossing the squishy balls one squeezes for stress relief to onlookers lining the streets, who often failed to catch them. She called taking part in Mock Con a “memorable experience.”

Not every aspect of the parade was rated G. The Maryland delegation chanted, “We love crabs! We have crabs!” Much swearing sounded from the Tennessee float, which flew Jack Daniels banners. On the next float down, representing Utah, one of the students in the crowd held up a sign that read “Biden touched my thigh,” a reference to some of the accusations of inappropriate physical contact that former Vice President Joe Biden faced in 2019.

“We seceded from your secession,” the West Virginia float proclaimed. The Iowa float, in a nod to the recent Democratic caucus debacle, had a sign that posed the question, “Who won?”

As the parade wound onto the W&L campus, the students passed alum Dan Coffey, 63, who came to Lexington from Cape Charles earlier this week for his brother’s memorial service, and stayed to see the parade. He participated in Mock Con himself when he was a student. The nippy weather made him nostalgic for the parade of his time, which was held in May.

Coffey said that when speaking at the memorial for his brother, historian and church organist David Coffey, he worked in a subtle reference to the fiery speech former Vice President Alben Barkley gave at the 1956 Mock Con just before collapsing and dying of a fatal heart attack.

Friday afternoon, as the Mock Convention officially got underway, the first speaker, Symone Sanders, national press secretary for Bernie Sanders in 2016 and a senior adviser to Joe Biden in 2020, told the student delegates gathered in the Duchossois Tennis Center, “There’s not a more powerful person on this planet than a young person with the ability to vote.”

She described a difficult moment when, on a CNN panel, she was asked by Jake Tapper to comment on the 2019 sexual assault allegations against Virginia Lt. Governor Justin Fairfax, for whom she once worked. She told the students that she responded that “I think he has to resign.” She further advocated that Gov. Ralph Northam and Attorney General Mark Herring face consequences for their blackface scandals. Immediately afterward she was criticized for tearing down fellow Democrats. Truth and social justice don’t have an “unless I know you” exemption, she said, drawing thunderous applause.

The students also heard a recorded message from U.S. Sen. Kirsten Gillibrand, D-N.Y., a former 2020 presidential candidate. “It needs to be our goal as a party to hold up the voices of women, to bring them to the decision-making table,” she said.

LEXINGTON — Four years ago, the students at Washington and Lee University’s Mock Convention …